The boundaries you set with all the people in your life are only as effective as your ability to enforce them. Though they might become more or less flexible depending on whether you’re dealing with strangers or loved ones, at the end of the day, healthy relationships demand that you have some sort of boundaries in place.

Privacy, space, and respect are essential for people to thrive. Some folks go to (seemingly) extreme lengths to protect these things. Redditor u/thatemobemo turned to the AITA online community for their opinion on a very delicate situation. She and her husband called the police after her in-laws dropped by to visit them, unannounced. The author of the post wanted to see if the AITA crowd thought she did anything wrong.

Scroll down for the full story, dear Pandas! Once you’ve gotten through everything, we’d love to hear your take on this. Do you think the OP was well within their rights to call law enforcement? Or did they go too far? What would you have done in this exact situation? Share your thoughts in the comment section.

Boundaries are essential for healthy relationships. How strict these are varies from person to person 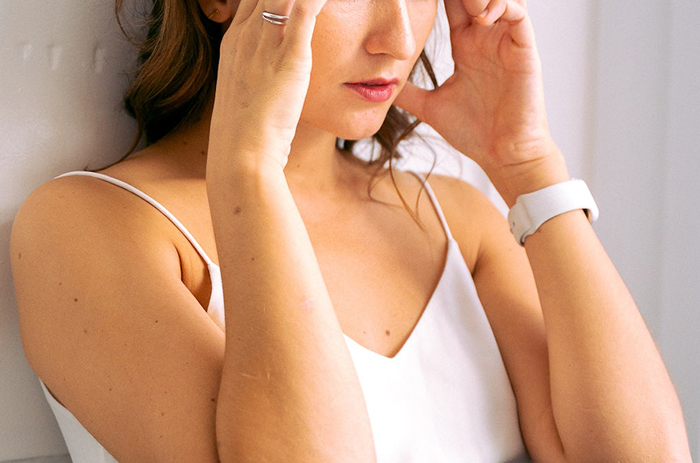 A woman asked the internet for a verdict on how she and her husband dealt with her in-laws, who dropped by to visit, unannounced 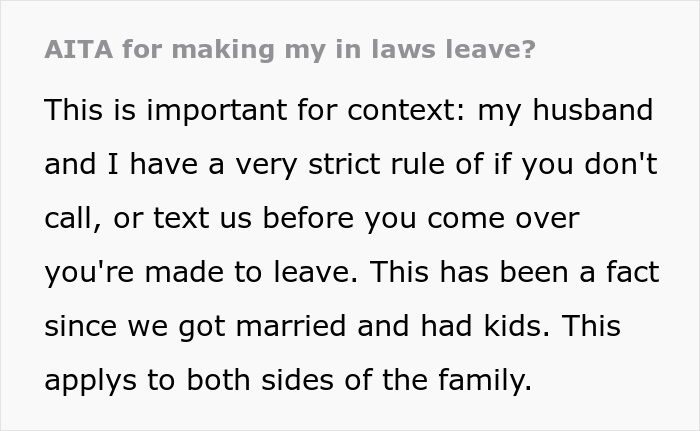 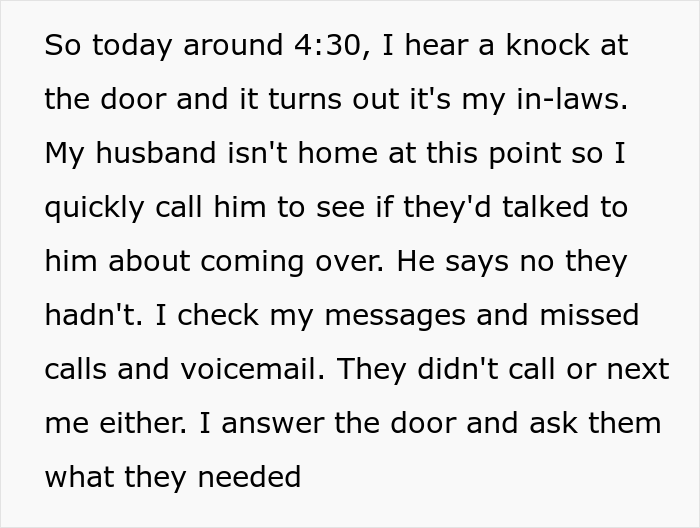 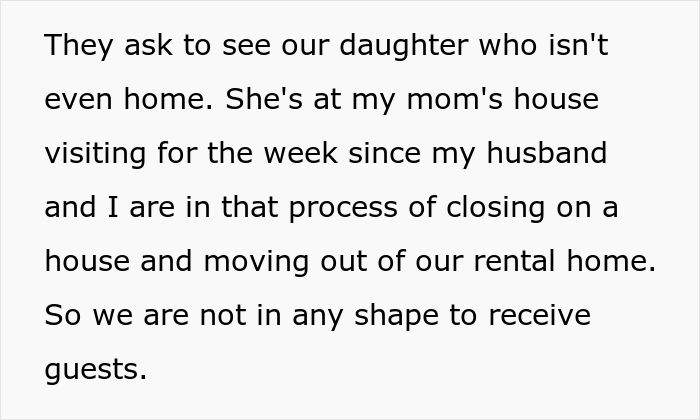 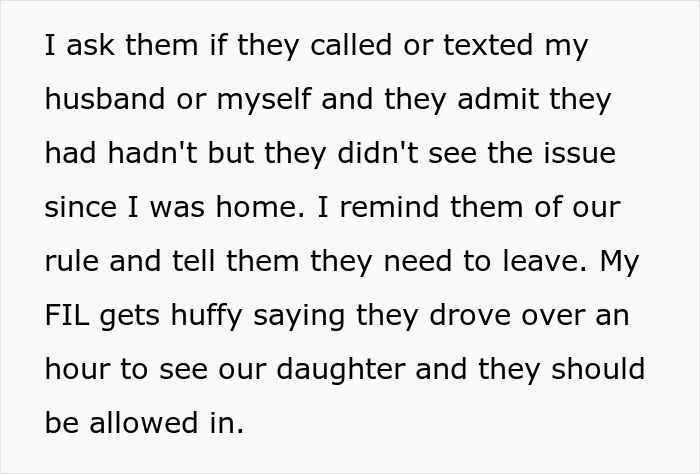 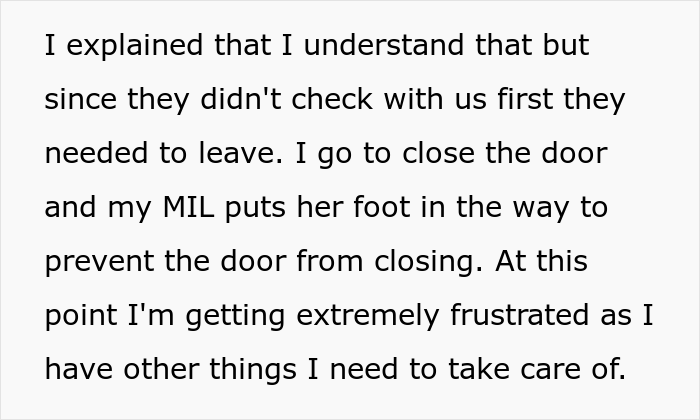 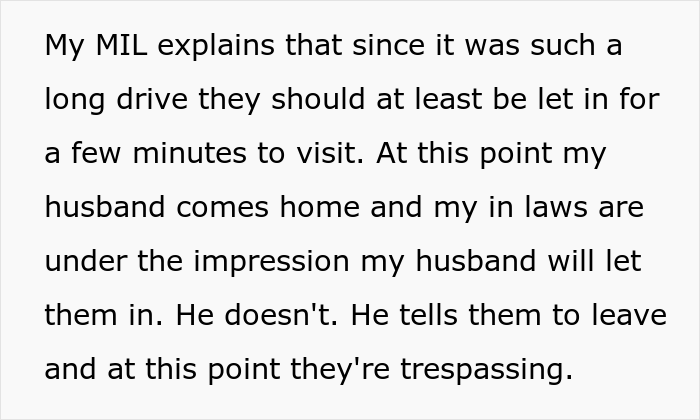 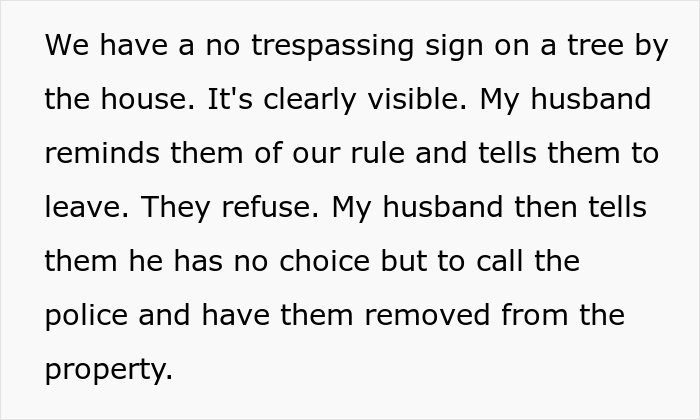 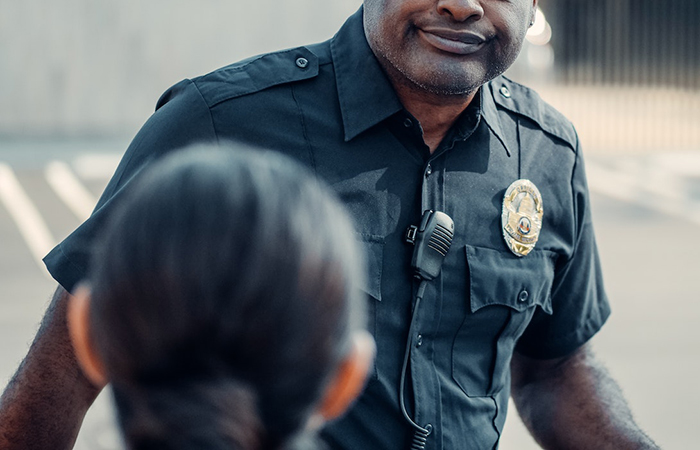 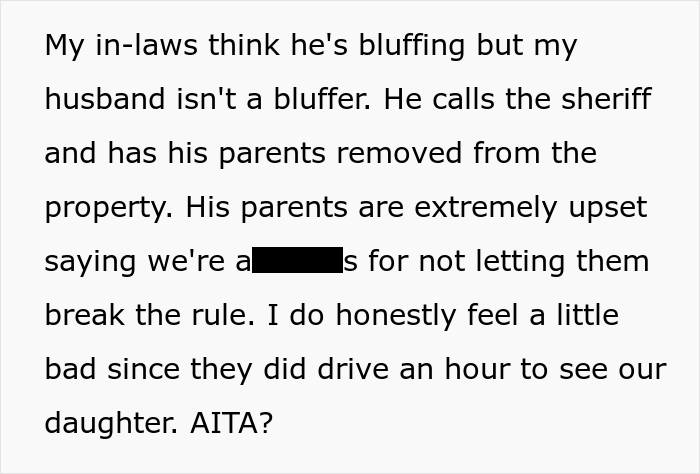 One point that definitely can’t be stressed enough is the fact that absolutely everyone is aware of the couple’s rule that you have to contact them before visiting. “My husband and I have a very strict rule of if you don’t call, or text us before you come over you’re made to leave. This has been a fact since we got married and had kids. This applies to both sides of the family,” she wrote in her post.

While that might sound overly strict and unfriendly to some internet users, others might recognize the fact that some people simply enjoy clear communication and loathe surprises. Moreover, strict boundaries like this one indicate that these boundaries may have been violated time and time again in the past. Hence the need for them. Different people set different expectations for these things.

Long story short, the in-laws drove for an hour to visit their granddaughter… who was away at the OP’s mom’s house. Had the in-laws contacted the couple, they might have learned that and wouldn’t have had to make the long trip. Instead, fully aware of the rules the couple has in place, the in-laws made the trip and then refused to leave. The mother-in-law even tried to prevent the door from being shut by using her foot.

That’s when the OP’s husband got in touch with the sheriff. Law enforcement arrived and they removed his parents, the post author’s in-laws, from the property. Very much in accordance to the ‘No trespassing’ sign that they have out front.

The vast majority of the AITA community stood up for u/thatemobemo, saying she had every right to do what she did. Especially since the in-laws were definitely aware of the ‘No call, no text? Leave!’ rule. Some redditors pointed out that there’s probably more to the story for why the rule exists at all.

Dating expert Dan Bacon, from The Modern Man, previously spoke to Bored Panda about the need for healthy boundaries in relationships, as well as other areas of life.

“If one person comes up with a boundary or rule in a relationship, it is then up to the other person to decide whether they want to adapt to that, or defy it,” he said.

“Sometimes a boundary or a rule that someone comes up with is unnecessary or unfair, so boundaries or rules aren’t something that automatically need to be followed by people in a relationship.” The expert noted that it’s rarely the case where one person/side in any relationship is completely right or wrong. There’s usually more context and a broader story.

“If your boundary is necessary and fair, but the other person is never willing to adapt to it, they either don’t love and respect you enough,” the expert said that this might also indicate the relationship (whether romantic or otherwise) isn’t long-term.

Most internet users stood in support of what the OP and her husband did. Here’s their reasoning 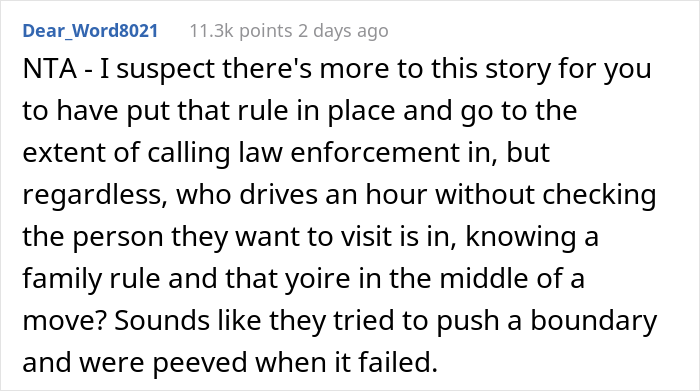 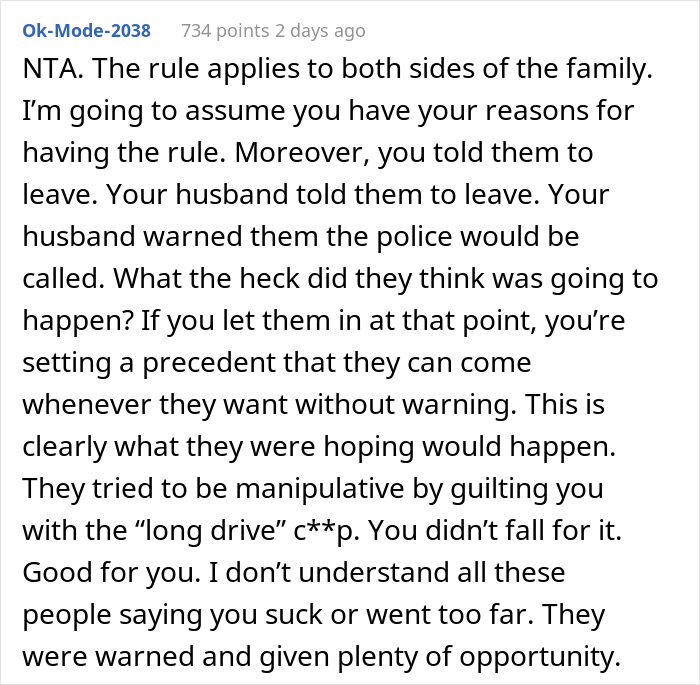 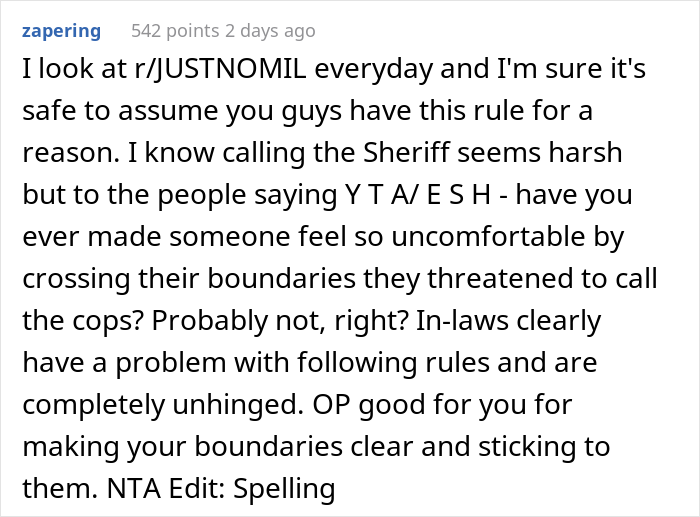 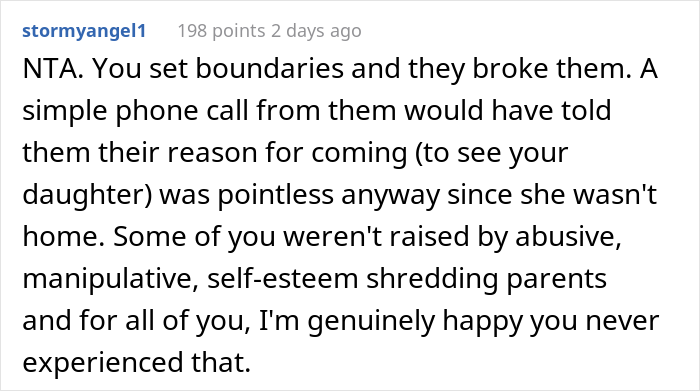 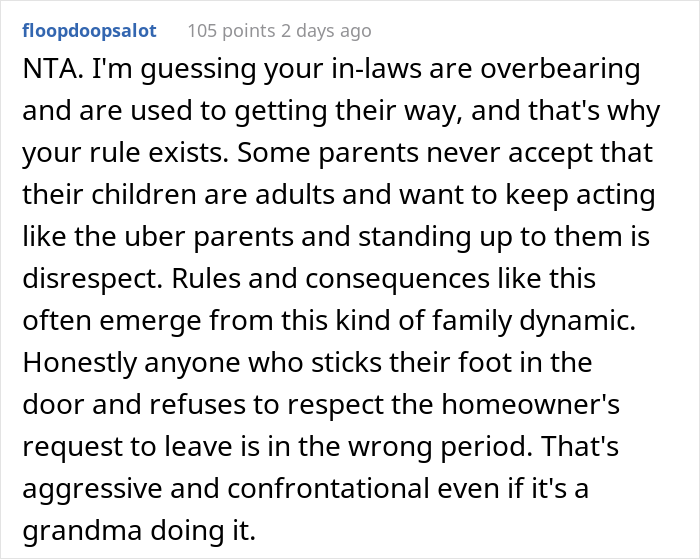 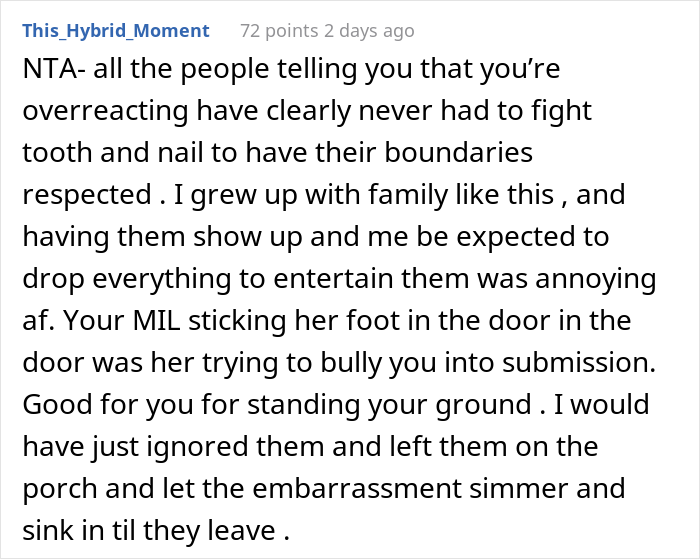 However, some folks thought that this was a massive overreaction on the couple’s part

The post Manipulative In-Laws Refuse To Leave After Showing Up Uninvited, Their Son Doesn’t Give In And Gets The Police To Remove Them From The Property first appeared on Bored Panda.