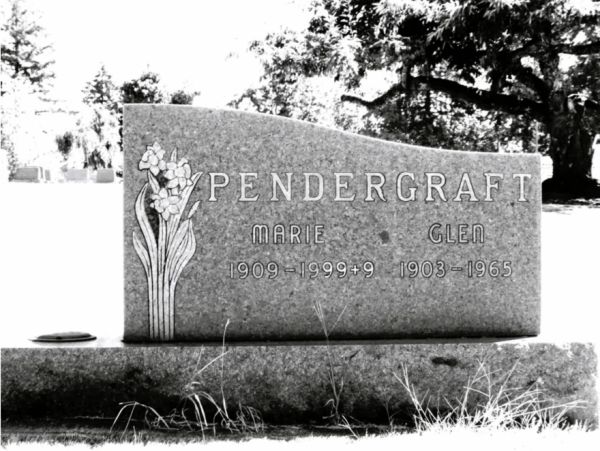 Ethel Marie Dillow married Glen Gifford Pendergraft in 1928. Glen died in 1965. Marie outlived him by quite a few years and died in… wait, when did she die? You might have to do some math to figure out that she died in 2008. This gravestone tells a story about the way we think of time. The stone was most likely erected in 1965. Back then, the 21st century seemed far away. As a kid, I thought about how very old I would be when the year 2000 rolled in. I’d be 41! At any rate, carving on a tombstone is easier and less expensive at the monument shop than in a cemetery, so Marie apparently had her death year pre-carved to begin with a 19. She didn’t consider the possibility that she would live into the 21st century, but then she lived to the age of 98. Her survivors did what they could to make the gravestone accurate, even though they had to pay a premium for more characters to be carved on-site. The contrast in the black-and-white photo above may lead you to suspect Photoshop, but the images at Find-a-Grave make it clear that the gravestone is real.