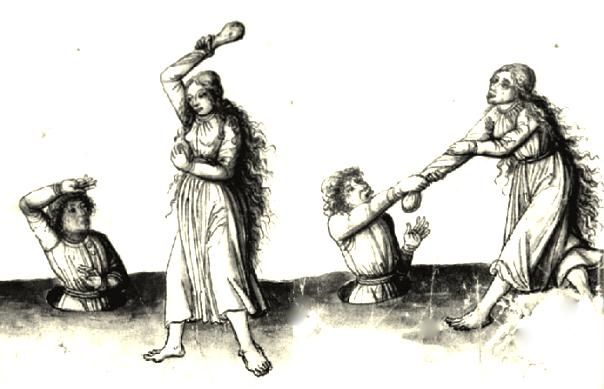 In a more civilized age, it was not unusual for men to resolve their differences on the field of honor. Alas, women were normally excluded and not allowed to battle men. There was at least one exception: in parts of central Europe, a wife could fight her husband to the death.

Men are naturally stronger than women, so the man must be handicapped in order to provide a more equitable combat. In Medieval Justice: Cases and Laws in France, England and Germany, 500-1500, Hunt Janin* writes:

In 1228, a woman fought a man at Berne, Switzerland, and soundly defeated him. German law provided that in such a case the man should be armed with three wooden clubs. He was to put be [sic] up to his waist in a three-food-wide hole dug in the ground, with one hand tied behind his back. The woman was to be armed with three rocks, each weighing between one and five pounds, and each one wrapped in cloth. The man could not leave his hole but the woman was free to run around the edge of the pit.

If the man touched the edge of the pit with either his hand or arm, he had to surrender one of his clubs to the judges. If the woman hit him with a rock while he was doing so, she forfeited one of her stones. Bizarre as it may seem to us today, this marital duel was very far from play-acting. For both parties, the penalty for defeat was death. If the woman won, the man was executed; if the man won, the woman was buried alive.

*Janin appears to be an extensive writer on history, but not necessarily a historian.