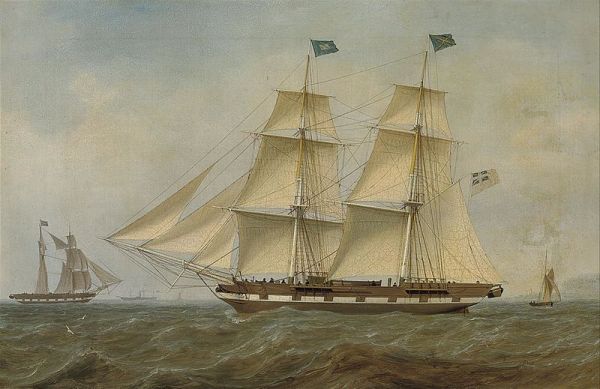 In June of 1858, a ship named the Mary Russell landed at Cork Harbor in Ireland. It had returned from delivering a shipment of mules to Barbados under the command of Captain William Stewart, who had just bludgeoned seven men to death- six crew members and a sailor who had hitched a ride on the ship. Stewart didn’t make any attempt to hide the murders, as he was thoroughly convinced they were planning a mutiny. There were no such plans, but the six-week journey was a descent into extreme paranoia for Stewart.

As Stewart revealed to Scoresby later, he hadn’t originally planned to harm anyone. He had asked the men to furl the sails so he could sail on without their help, in search of a ship to rescue him from their treachery. But one had already passed them by during the battle with Howes, and a second turned away—possibly thinking the Mary Russell was a pirate ship—despite Stewart’s attempts to flag it down.

And then a new thought struck him: Surely if the crew were innocent, God would have directed the second ship to rescue them. And since death was, in Stewart’s understanding, a punishment befitting the crime of mutiny, that must be what God intended for them. That notion, together with the terror that Howes, still at large, could murder him at any moment, gave way to a sudden, sobering realization.

Stewart must kill his crew.

Read the story of the Mary Russell’s journey and the trial that ensued at Mental Floss.