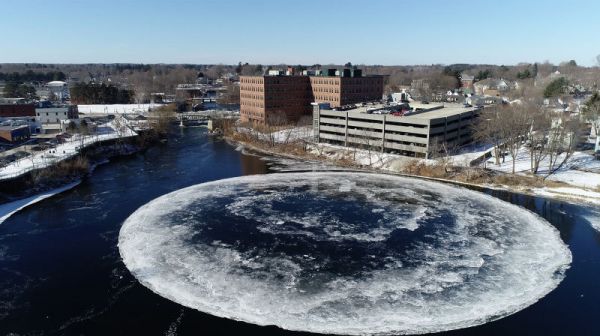 We’ve seen ice carousels, spinning disks of ice that were cut with chainsaws and set in motion with rotary tools or outboard motors. This is different. A giant spinning disc of ice appeared on its own in the Presumpscot River in Westbrook, Maine. Is it an artifact of an alien landing? No, just a rare phenomenon that’s been seen before.

Curiosity about giant, rotating ice disks dates to at least the late 1800s. Research on prior instances of the phenomenon, published in Physical Review E in 2016, found that as melting ice sinks off disks it “goes downwards and also rotates horizontally, so that a vertical vortex is generated under the ice disk.” Speaking with the the Press Herald, Bowdoin College in Brunswick associate physics professor Mark Battle suggested the Westbrook ice disk’s rotation could also be the result of thick ice moving with the river current, getting trapped, and grinding against the shoreline.

However, this disc is particularly large, estimated at 100 yards across. So far, the only ones brave enough to ride on it are some ducks. Read more about the disc and see a video at Earther.