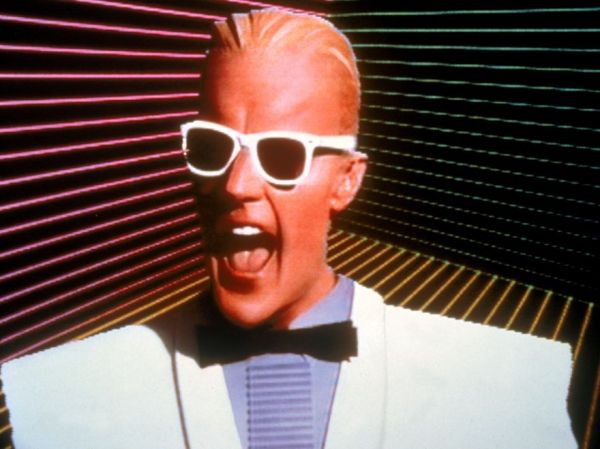 Max Headroom was a fictional computer-generated character who was designed for TV hosting and advertising, but was actually pretty subversive underneath because the artificial intelligence program that generated him used the brain of a real (although fictional) person as a model. The character, portrayed by Matt Frewer in prosthetics, first appeared in the British movie Max Headroom: 20 Minutes into the Future in 1985. He then hosted a TV show called The Max Headroom Show, followed by an American drama titled simply Max Headroom, and also appeared in a series of ads for New Coke, all in the 1980s.

Now Max Headroom is coming back, to be played once again by Matt Frewer. A new TV series is being developed by AMC around the glitchy TV personality, with Christopher Cantwell of Halt and Catch Fire fame as showrunner. The executive producers will be Frewer, Cantwell, Lisa Whalen, Elijah Wood, and Daniel Noah. There’s no word yet on when the series is expected to air.

What’s weird is that in 1985, a glitchy, digital talking head seemed like some type of science fiction that was just over the horizon. In 2022, we have talking digital avatars, deep fake videos, and artificial intelligence programs galore. We have to wonder what year the Max Headroom reboot will be set in, and whether it will explore new issues about the nature of AI, or will it be just a nostalgic romp. -via Boing Boing