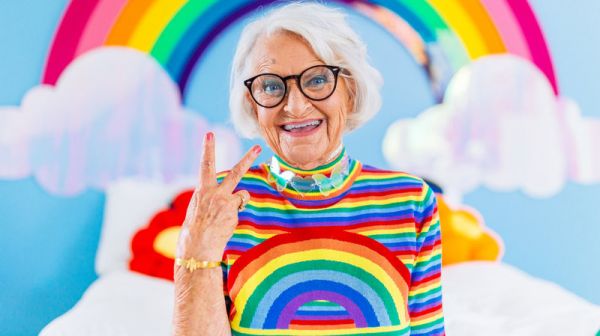 The next time an older person tells you they don’t understand social media or the internet, claiming it’s strictly for young people, you should show them Baddiewinkle’s Instagram account and shut them up for good.

Baddiewinkle is the alternate identity of 88-year-old great grandmother Helen Ruth van Winkle, who has amassed over 3 million followers since posting to Instagram for the first time back in 2014.

The creation of Baddiewinkle has made a very positive impact on Helen’s life, and she even has a new book out called Baddiewinkle’s Guide To Life, but internet fame hasn’t changed the Instagrandma one bit:

Before she became famous, Baddiewinkle lead a pretty normal life in Waco, Ky. “I had a little 6-acre farm. I took care of it by myself for 15 years,” she says. “I did everything that you’re supposed to do: mowed, trimmed, had a little garden. I kept busy at all times.”

Then one day her great-granddaughter saw her in a pair of cut-off shorts and a tie-dye shirt and said, “Let’s make a picture, Grandma, you look awful cute today.”

“So I said, ‘OK!’ ” Baddiewinkle recalls. “But from there, you know, it went viral and I was so surprised.”

What did people see in that photo? “I think they saw a great-grandmother that didn’t care what anybody thought about her,” Baddiewinkle says. ” ‘Here’s a rebel. We like her.’ “

hi guys! I have a new book coming out on July 4th you can pre order it now for cheaper!! it’s about fashion, my life experiences, advice, everything!! and over 100 never before seen photos thank you guys for everything and always supporting me! Link is in bio @ryannhall