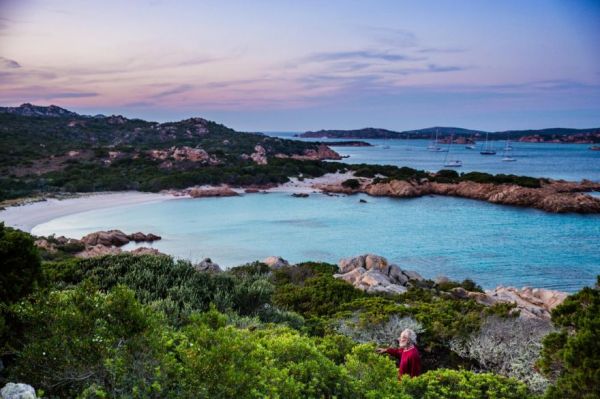 In 1989, Mauro Morandi’s catamaran drifted onto Budelli Island in the Mediterranean Sea. He met the island’s caretaker, who was retiring. Morandi took his place on the otherwise-uninhabited island and never looked back. He’s been the sole resident there for 28 years now.

Maddalena Archipelago National Park is comprised of seven islands, and Budelli is considered the most beautiful among them for its Spiaggia Rosa, or Pink Beach. The rose-colored sand derives its unusual hue from microscopic fragments of corals and shells, which have been slowly reduced to powder by the relentless shifting of the waves.

In the early nineties, Spiaggia Rosa was dubbed a place of “high natural value” by the Italian government. The beach was closed off to protect its fragile ecosystem, and only certain areas remain accesible to visitors. The island rapidly went from hosting thousands of tourists per day to a single heartbeat.

The national park does not pay Morandi to watch over the island, greet visitors, and pick up the beach trash. In fact, they tried to evict him last year, but a citizen’s petition persuaded the government to leave him alone. Read about the 78-year-old Morandi and his solitary life on Budelli island at National Geographic.

Rating Meet the Man Who Has Lived Alone on This Island for 28 Years is 5.0 / 5 Votes: 1
Please wait...
Loading...
Related articles