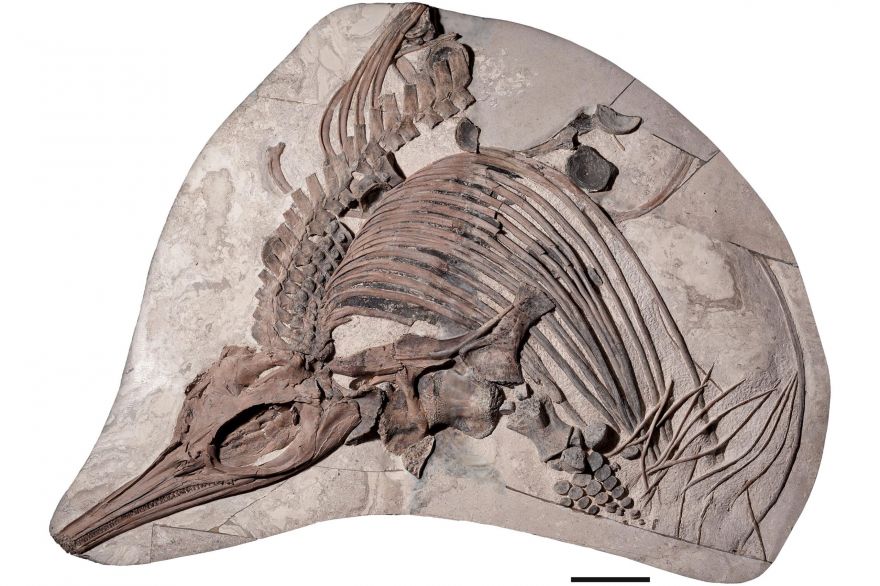 It’s smaller than we would imagine a ‘sea dragon’ to be. The Thalassodraco etchesi or Etches sea dragon is a small marine reptile from 150 million years ago. The species, whose remains have been discovered in a marine deposit in Dorset,  England, may have been able to dive to extreme depths, and are also described as “streamlined marine predators from the Late Jurassic period.” IGN has more details:

“This ichthyosaur has several differences that makes it unique enough to be its own genus and species,” paleontologist Megan L. Jacobs said. “New Late Jurassic ichthyosaurs in the United Kingdom are extremely rare, as these creatures have been studied for 200 years. We knew it was new almost instantly, but it took about a year to make thorough comparisons with all other Late Jurassic ichthyosaurs to make certain our instincts were correct. It was very exciting to not be able to find a match.”

This specific specimen was discovered in 2009 and was estimated to have been about 6 feet long. It was discovered by fossil collector Steve Etches MBE after a “cliff crumbled along the seaside.”

It appears to have some similarities to sperm whales with its “extremely deep rib cage” that may have allowed for larger lungs and space so internal organs weren’t crushed under the pressure. It also had large eyes, which meant it could have been able to see well in low light.

Its hundreds of tiny teeth seem to indicate a diet that may have consisted of squid and small fish, and “the teeth are unique by being completely smooth.”