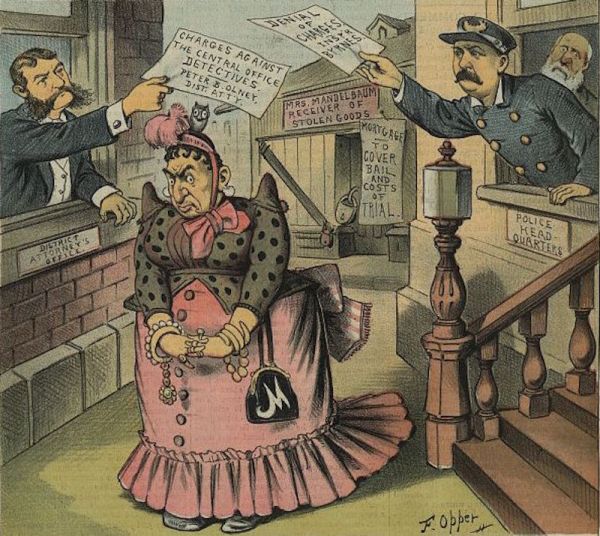 Fredericka “Marm” Mandelbaum immigrated from Prussia to New York City in 1827 with her husband.  She had four children, and worked her way up the ladder from a street peddler to a powerful position as New York’s “Queen of Fences.” She moved so much stolen goods that she needed an entire building as a warehouse. Mandelbaum spread the wealth around, by paying thieves for their loot, keeping her lawyers on retainer, and bribing city officials.

With friends on all sides of the aisle, she was well known at the Eighth Ward Thieves’ Exchange, a New York black market. She often networked at her synagogue, local beer and oyster halls, and had politicians eating out of the palm of her hand. Many officials who recognised her influence would make it a point to stop by her dry goods store to say hello hoping that her favour could win them the Jewish vote.

She had judges and police alike in her pocket and often walked away clean handed even after being brought in. Newspapers described her as the woman who “first put crime in America on a syndicated basis.” But like any good crime boss, she never forgot to give back to her community.

Mandelbaum’s way of giving back was to to teach young New Yorkers the art of thievery, and even eventually hiring teachers to do it for her. Read about Mandelbaum’s crime empire and her school for crooks at Messy Messy Chic.