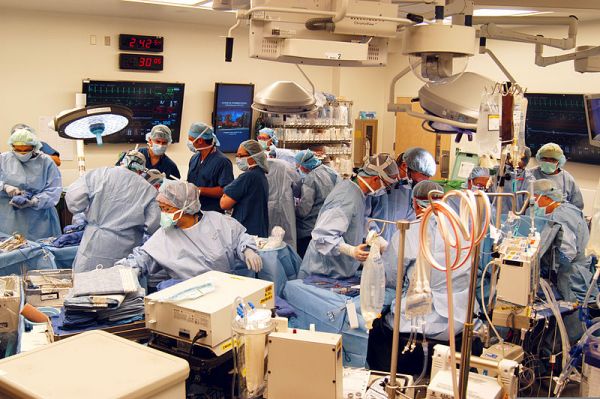 In 2010, Ray was a Navy corpsman in Afghanistan who stepped on a roadside bomb while trying to reached a wounded soldier. The blast blew off both of his legs, plus his penis, scrotum, and a chunk of his abdomen. In his years of recovery, he learned to walk again with prosthetic legs, but it was his unseen wound that bothered him more. Significant genital injuries affect 1,367 American veterans of the wars in Iraq and Afghanistan. The standard treatment for a missing penis is phalloplasty reconstruction, creating a living prosthetic from the patient’s own tissues, but that is not only a poor substitute, it was not enough to replace Ray’s missing body parts. In 2012, his military doctors referred Ray to the reconstructive surgery group at Johns Hopkins. Surgeon Richard Redett thought Ray might be a good candidate for their first penis transplant. A suitable donor suddenly became available in 2018.

Once they had removed and packed Ray’s graft, nothing else mattered except speed. Bodily tissue begins to break down the instant it’s deprived of blood. If enough toxins are released, the tissue can swell so much it asphyxiates. It’s why you throw transplants on ice, as Redett’s crew did for their Learjet flight back to Baltimore—it delays the breakdown process.

It’s also why surgeons train, practice, and visualize their maneuvers. Redett’s team had already run dry rehearsals of their procedure. In the operating room, they had set up the table where Ray would lie, figured out where the ice machine went, placed the optical microscope Redett would use, and even tested every power outlet to make sure they wouldn’t short a circuit.

As the team ate snacks from their go-bags on the plane back to Hopkins, other surgeons wheeled Ray into the operating theater. By this time it was 11 p.m. on Sunday, almost 24 hours after he had arrived at the hospital. They prepared him by removing all the diseased tissue and exposing the blood vessels, nerves, urethra, and penile stump. At 2 a.m. Monday, Redett and his fellow surgeons took their places—some standing above Ray, the rest tending to the graft at another table—and steeled themselves. The gravity of his mission consumed Redett’s thoughts.

The surgery took 14 hours. Read how the operation was done, the history of penis transplants, and how Ray is doing a year later, at MIT Technology Review. -via Real Clear Science