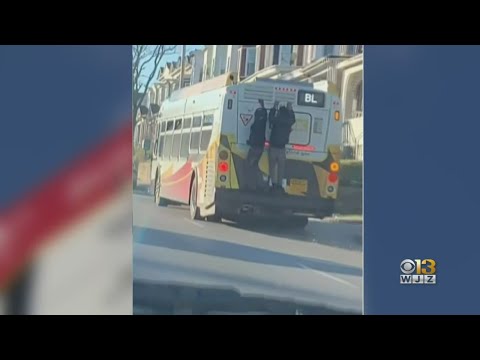 Two young men catching a free ride on the back of a Maryland Transit Administration (MTA) bus were captured on video by a traveler.

The video, posted to Twitter, shows the two young men standing on the rear bumper of the moving bus and holding onto the back of the vehicle.

The aforementioned video appeared at around the same time a photo of two men sitting with their legs crossed in the back hatch of an MTA bus in Baltimore. The photo, however, is said to have been tampered with, according to the MTA.

…safety precautions are being put into place to prevent back panels from being opened by unauthorized people.

“The safety of our operators and passengers is the first priority for the Maryland Transit Administration,” the MTA said in a statement to WJZ-TV.

I wonder, why did the men do that? Is it on their bucket list?

Rating Men Hitching A Ride On the Back of A Baltimore Bus Caught On Camera is 5.0 / 5 Votes: 4
Please wait...
Loading...
Related articles