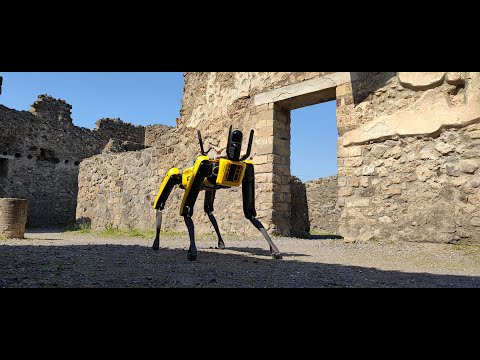 The city of Pompeii is an archaeological treasure, as it is gradually dug out from underneath the ashes of Mt. Vesuvius’ 79AD eruption. That means looters, people who steal and trade in historical relics, want to get into the city. To guard the site, authorities are using Boston Dynamics’ Spot robots. They can patrol all night without rest, watching and recording any activity, aided by drones that can watch from above. Not only are the robots acting as security guards, they are also monitoring the ruins for signs of change or damage so that preservationists can catch problems with the fragile structures before they completely fall apart. It sounds like a good use for these dog-like robots. They could sure scare a thief away! Read more about the project at Gizmodo.

But what if…  Mt. Vesuvius were to erupt again? The city is mostly restored to its condition from 2,000 years ago. Imagine if it were buried under lava, ash, and rubble again, only to be excavated again in another 2,000 years. These scientists of the future would find Roman roads, ancient homes and businesses, and robots. And that’s the kind of thing that causes us to misunderstand history. -via Nag on the Lake