“Don’t cry over spilled milk!” And in this case, don’t shower either.

When parents hire a new babysitter, they are putting a lot of trust in that person. Moms and dads are handing over their entire worlds when they leave their children in the care of a sitter, so it’s understandable that they might feel uneasy at first. But babysitters should also understand the boundaries that come along with being in someone else’s home. It may not be the most traditional job, but babysitting is certainly still work. And I don’t think most of us would be comfortable showering at work or in our employer’s home, especially after only working there for two weeks…

3 days ago, one mother reached out to the “Am I The [Jerk]?” subreddit wondering if she had a right to be upset after finding out her babysitter had showered in her home. Below, you can read the full story, as well as some of the replies from readers who started theorizing about what may have actually happened. Feel free to let us know your thoughts on this situation in the comments, and then if you’re interested in reading another Bored Panda article featuring babysitter drama, check out this story next.

After finding out that her babysitter took a shower in her home, this mother is wondering if she had a right to be upset 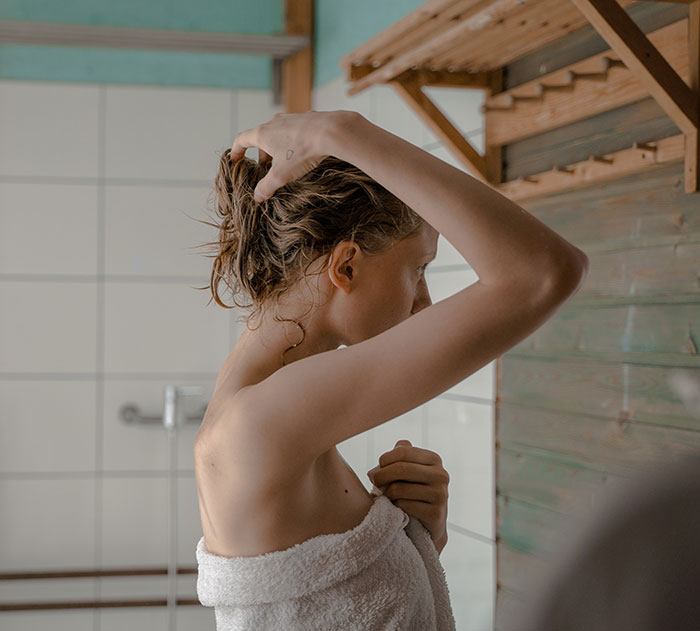 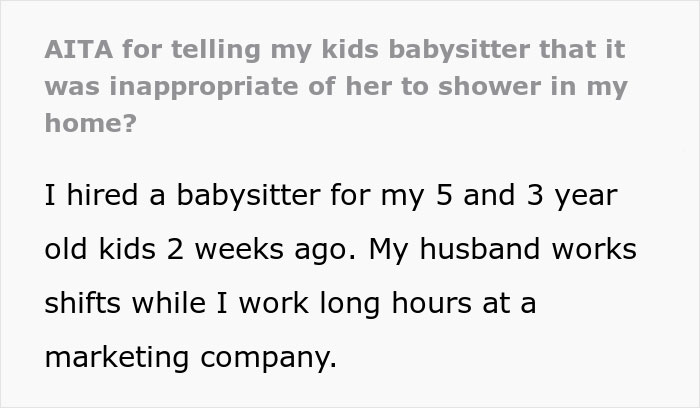 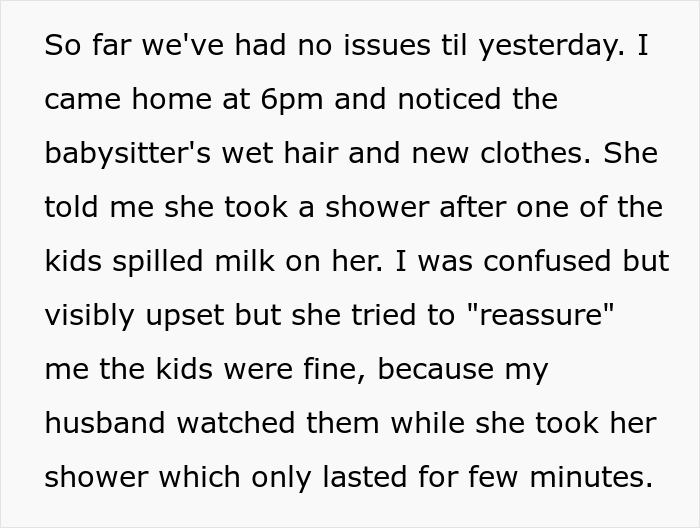 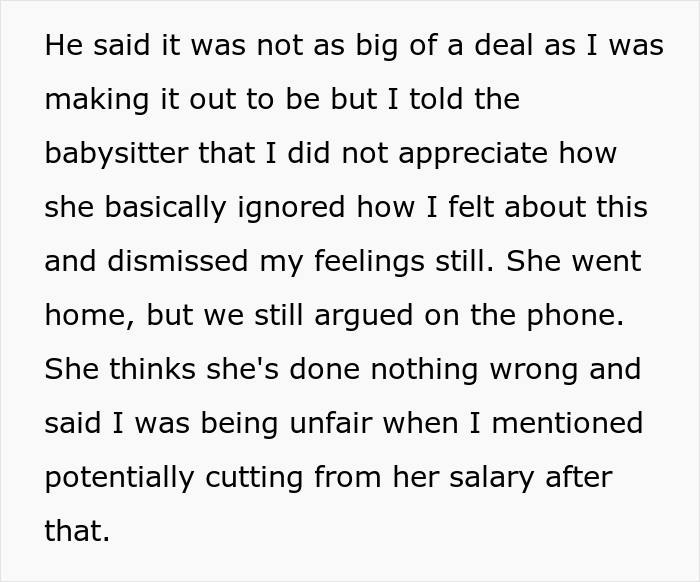 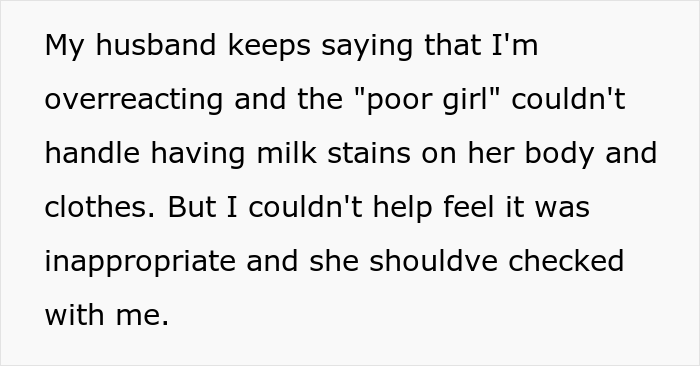 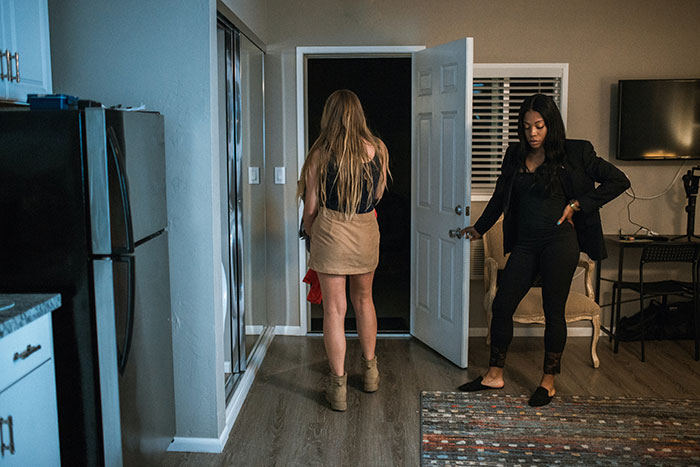 Later, the mother clarified some more details about the situation 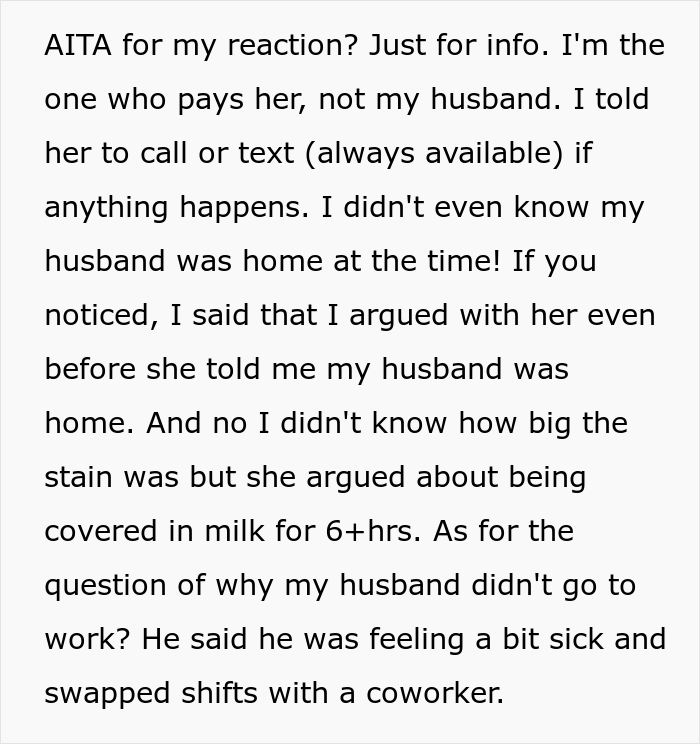 Babysitting is an interesting job that often has blurred lines of what is appropriate at work. For example, parents often tell you to help yourself to whatever you’d like from the refrigerator or pantry, and you might wear very casual clothes to be running around with children all day. You may have to help the kids use the toilet or take a bath, depending on how old they are, and you might end up working until about three in the morning when parents are out partying. It is certainly very different from working a traditional office job. But I have to say, I have babysat countless times for various families, and even after coming to the same home for a year, I don’t think I would have ever been comfortable helping myself to a shower without asking.

If something out of the ordinary happens while babysitting, it is always crucial to inform the parents. There should not be any surprises when they return home. If there was a mess in the kitchen with spilled milk and you manage to clean it all up before they return home, you don’t have to tell the parents immediately. But if there is such a big mess that your clothes are drenched in milk and you feel the need to take a shower, the parents probably want to know. Especially the mother, in this case, who noted that she has been the only one in communication with the babysitter.

Not to mention the fact that helping yourself to a shower in someone else’s home would feel completely inappropriate to many people in the first place. It feels quite intimate to use someone’s shower, find and use one of their towels and take time away from the children when you’re supposed to be working. It may feel like you’re just hanging out with children, but babysitting is a job. And the most important things to ensure are that the children are safe and happy.

Many of the comments on this post were people suggesting or wondering if something suspicious had been going on with this babysitter and the children’s father. While it is absolutely not my place to try and dissect the situation and determine whether or not something fishy had happened, it is a good reminder to make sure that you always trust the babysitters you bring into your home.

If they’re recommended to you from someone you know and trust, that’s great. If you hired them through a company, they should have had proper training and background checks run on them. But at the end of the day, trust your gut. If you feel uneasy around them, there is no way you will feel comfortable leaving your kids around them for hours on end.

We would love to hear your thoughts on this situation in the comments. Have you ever had a babysitter try to take a shower in your home? How would you react if one of them did? Then if you’re interested in checking out another Bored Panda article featuring drama with a babysitter, look no further than right here.

While others told the mother that she handled the situation poorly 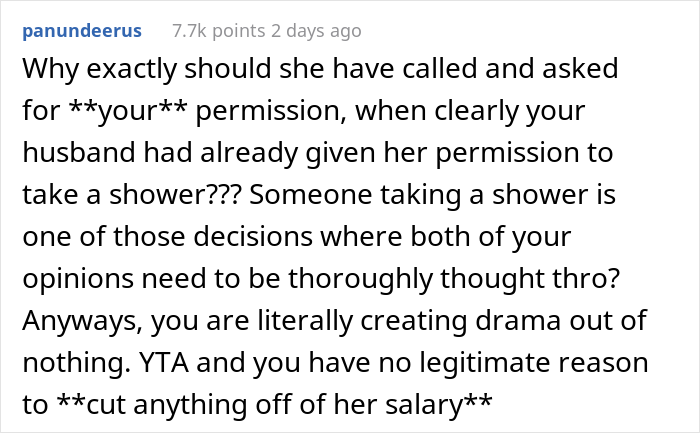 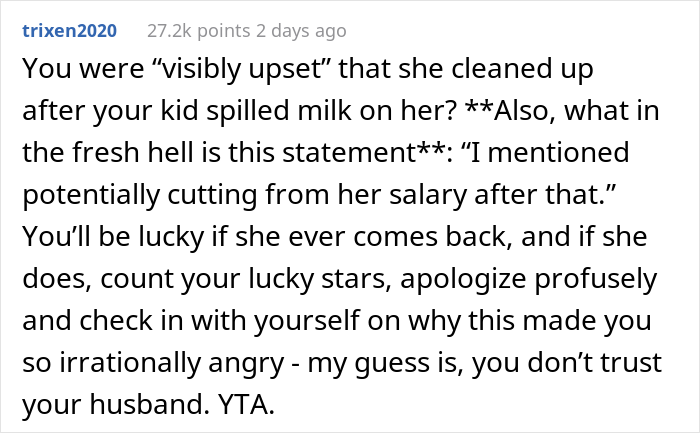 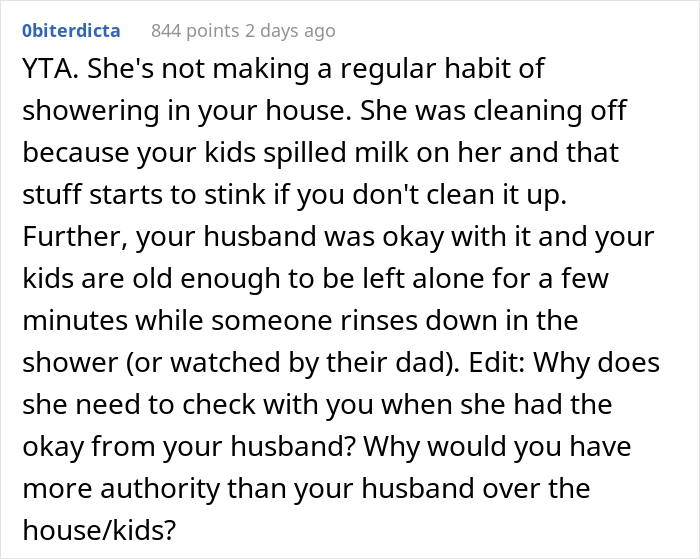 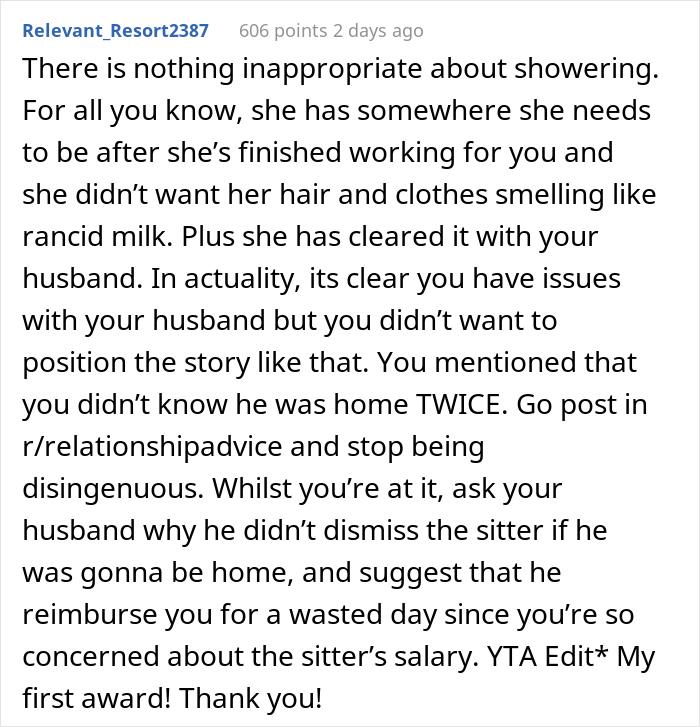 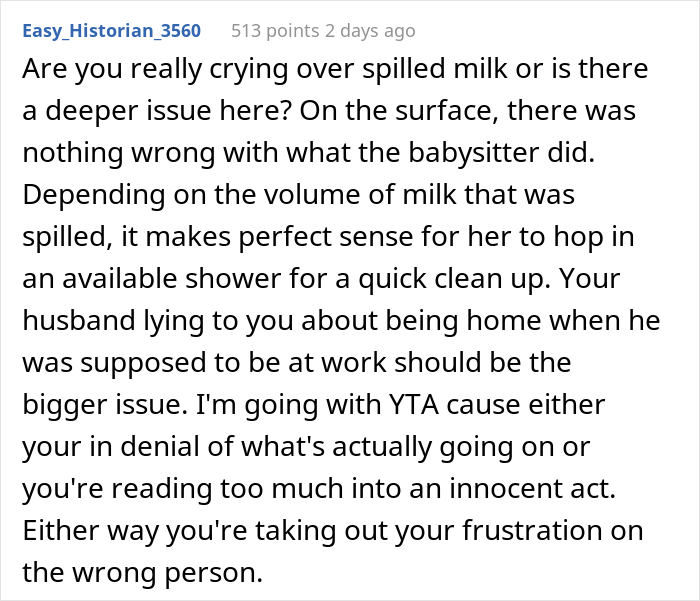 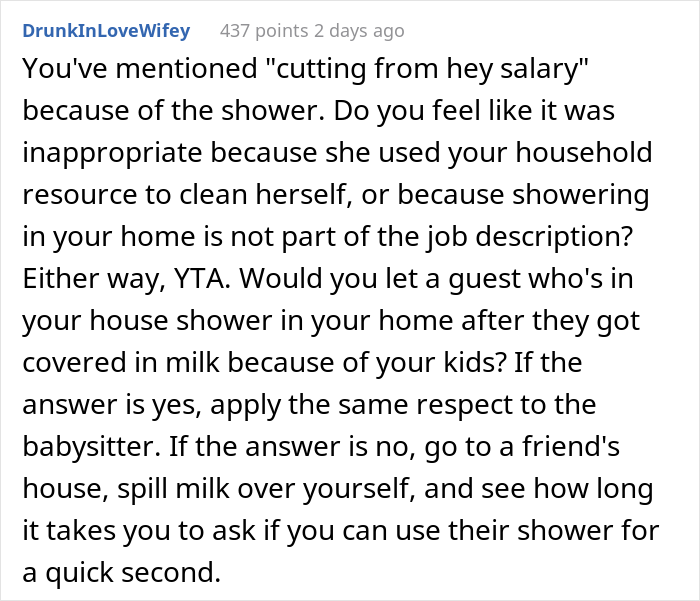 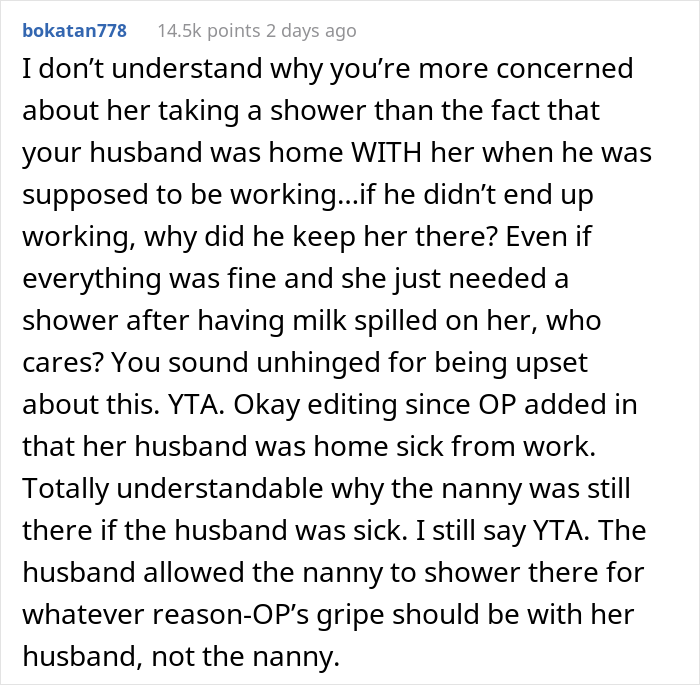 The post Mom Blows Up At Babysitter For Taking A Shower While Working, Asks The Internet If She’s Overreacting After Husband Starts Defending The “Poor Girl” first appeared on Bored Panda.