Parents know what’s best for their children. Except in instances when they become over-involved and start hovering over every aspect of their child’s life. See, helicopter parenting is notorious for its backfiring effect, and controlling moms and dads often exercise judgments clouded with the desire to make their kids succeed. They can’t seem to let their little ones off the leash. Even when they grow up, go to college, and try to navigate the twists and turns of this thing we call life.

So what happens when the microparenting doesn’t stop? Well, a story posted on the popular AITA subreddit illustrates it can swiftly turn into a significant challenge and a hindrance that makes everything more complicated. As a hiring manager at a tech company detailed, what was supposed to be an internship interview with a 19-year-old guy suddenly became an interview with a mom meddling in his career.

Naturally, this whole ordeal put a strain on the process and cost the young man his job. But guess if the woman let it slide? Scroll down to find out how the situation escalated below, as well as the verdict readers were quick to deem. Keep reading to also find an interview with licensed psychologist Gail Post, Ph.D., and then let us know what you think of the incident in the comments!

After a mother crashed her 19-year-old son’s internship interview, this hiring manager is asking for perspective on how they handled the situation 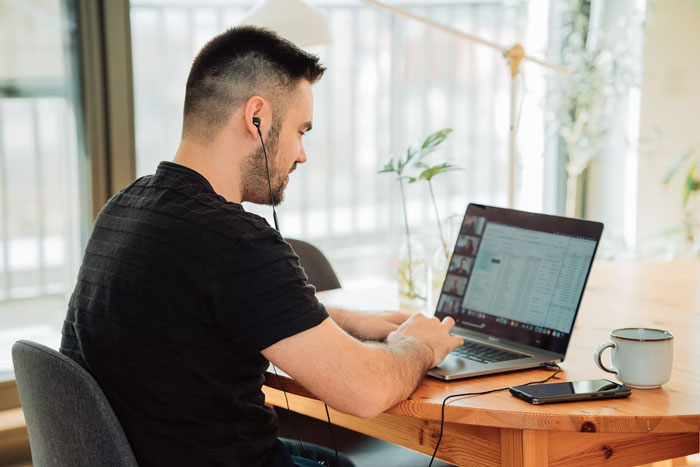 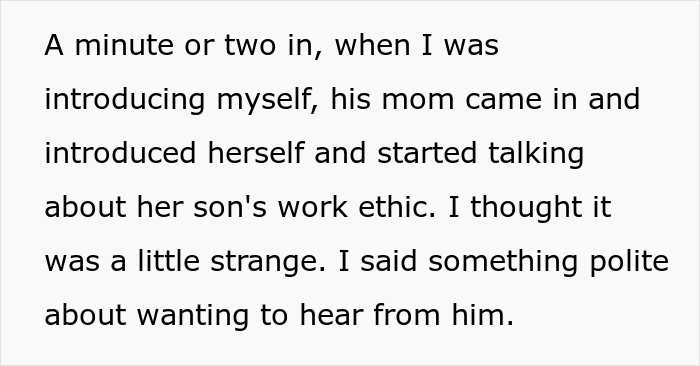 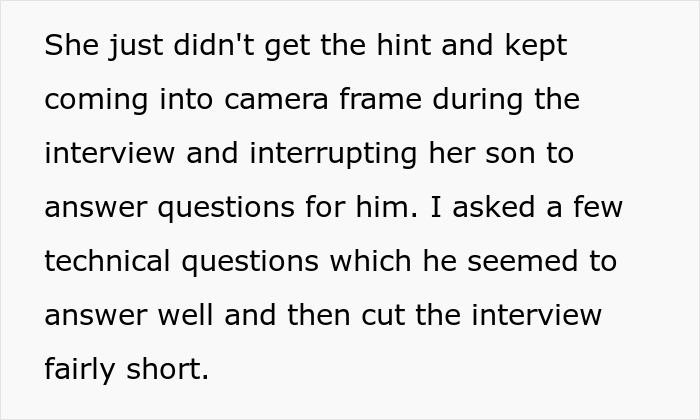 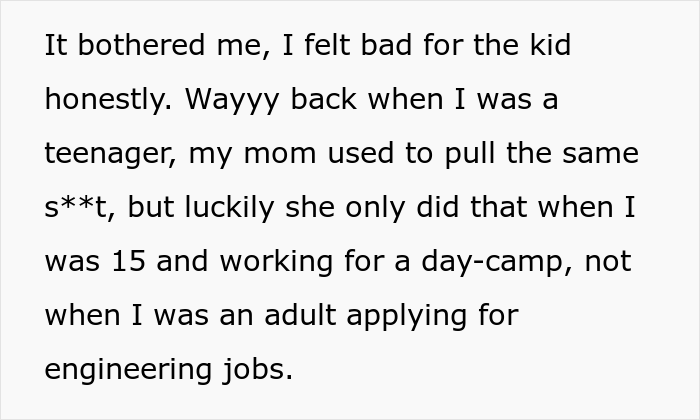 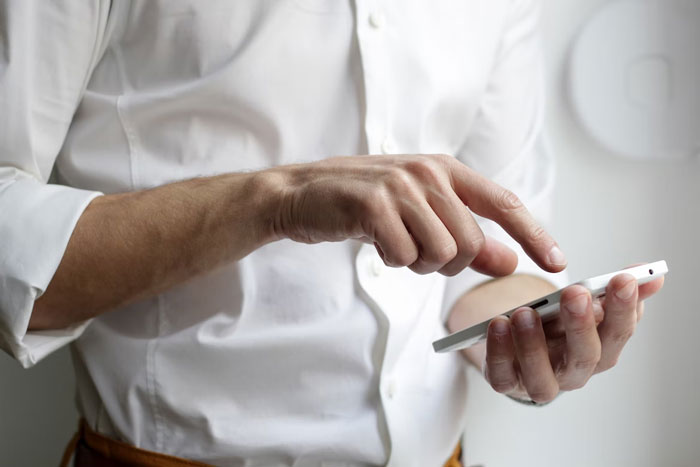 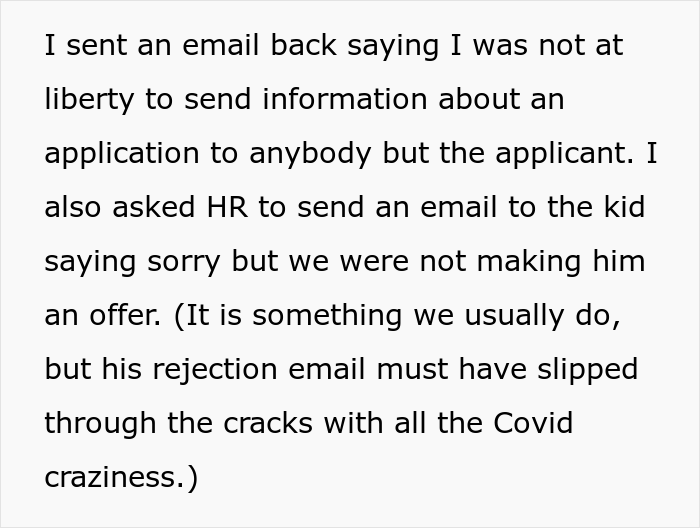 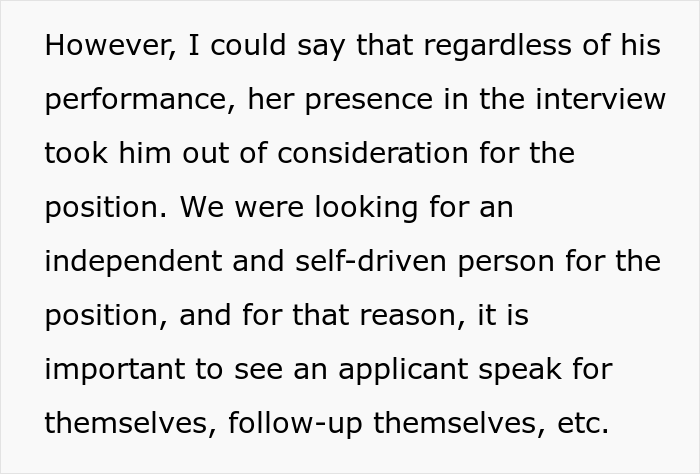 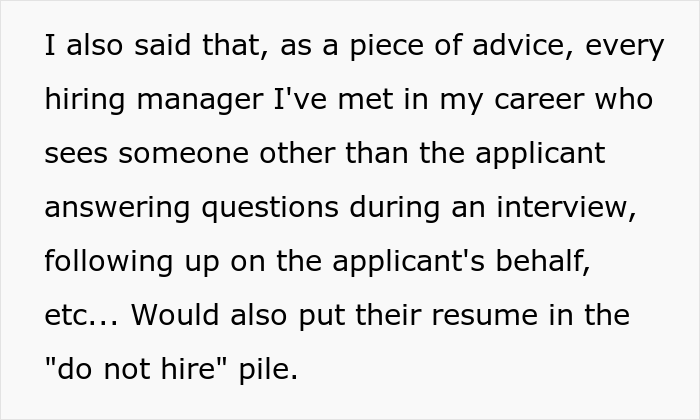 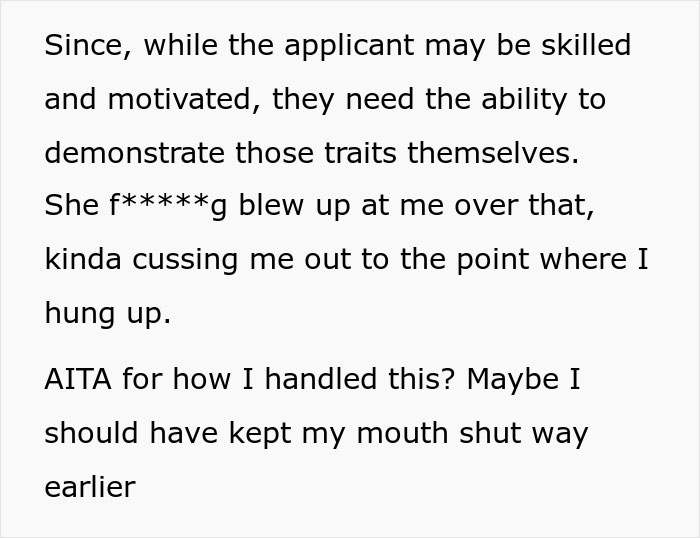 Children often want parents to have their backs, but getting overly involved in their lives does not seem to be the answer. Guessing from the comments, the majority of readers sided with the hiring manager, calling out the mother and her questionable ways. But some people chimed in with different opinions, explaining it seems unfair for the kid to lose the opportunity because of his mom, especially when he seemed to know the technical part of the interview well.

For most of us, it may seem common sense that parents shouldn’t attend a job interview alongside their kids. But these situations may be more common than you’d think.

An OfficeTeam survey of over 600 senior managers at companies with 20 or more employees in the US found that more than 1 in 3 senior managers (35%) said they’re annoyed when helicopter parents are involved in their kids’ search for work. Another one-third (34%) stated that while they prefer moms and dads to stay out of the job hunt, they would let it slide. And for 29% of managers, parental involvement is not a problem.

To gain more insight on the topic from a parenting expert, we reached out to Gail Post, Ph.D., a licensed psychologist and author of The Gifted Parenting Journey: A Guide to Self-Discovery and Support for Families of Gifted Children. “When children are very young, parents automatically assume a greater level of control,” Post told Bored Panda. “Transitioning to giving a child more freedom is difficult for some parents who struggle with letting go and also trusting that their child is up to the task.”

According to the psychologist, excessive control these parents attempt to wield often stems from anxiety: “Parents love their children and want the best for them, but intervene inappropriately because their anxiety drives their behavior.”

Unfortunately, when these behaviors are left unaddressed, they tend to do more harm than good. “When a child (or young adult like the college student in the story) is restricted from engaging in developmentally appropriate tasks, like a job interview, they never learn to trust their own abilities, resulting in feelings of inadequacy,” Post explained.

The obvious problem with helicopter parenting is that it prevents kids from developing the skills they need in life and damages their emotional well-being. “Some children become overly fearful and dependent on excessive guidance and reassurance; others may rebel and push their parents away. The parent’s overcontrolling behavior backfires and creates an outcome that is counter to what they really want — a happy and successful child or adult.”

But is it possible to put a stop to overparenting? Well, explaining what’s the best approach to dealing with overbearing parents can be complicated, as everything depends on a particular situation. But Post suggested that parents should start by listening to themselves, their feelings, and managing them appropriately.

“If a parent suspects (or is told by others) that they are overly controlling, they would benefit from addressing the anxiety that drives this behavior,” she explained. “Seeking support from trusted friends, family, or a mental health professional can provide an outlet and guidance for reducing the controlling behavior.”

When it comes to children of controlling parents, how they respond depends on their age. “Young children may not be able to express their feelings verbally and may act out, rebel, or withdraw,” Post said.

“Older children, teens, and young adults, though, can calmly let their parent know that they love them and understand that the behaviors are due to their concerns, but that it is making the situation worse. They can tell them how the controlling behavior is affecting their feelings about themselves and their confidence, and that it is creating a barrier in their relationship with them.”

“If the parent is unwilling to listen and try to change their behaviors, the child would benefit from seeking guidance from other trusted adults, friends, or a mental health professional,” Post concluded.

The vast majority of readers assured the user they did nothing wrong, calling out the mother for meddling in her son’s career 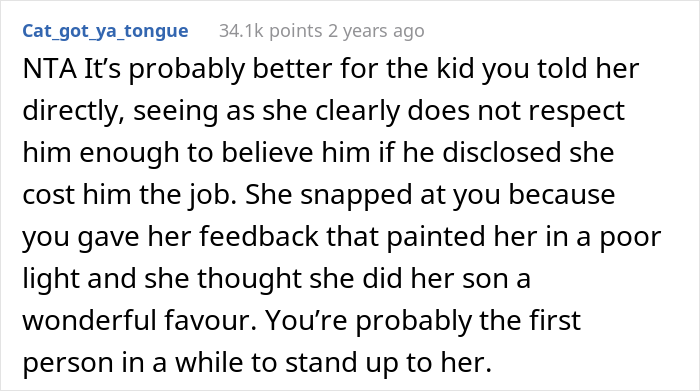 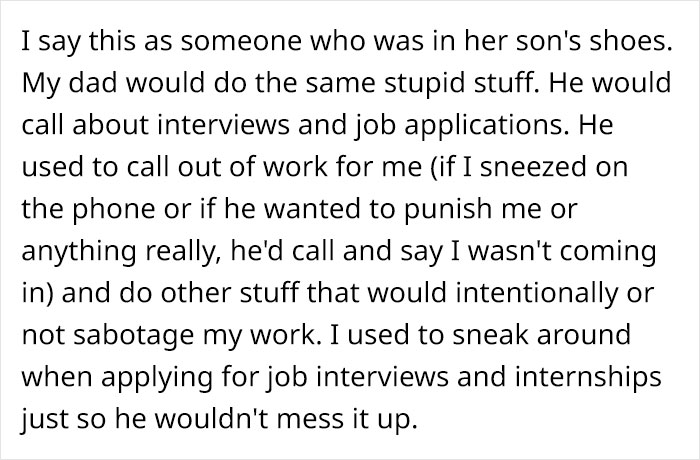 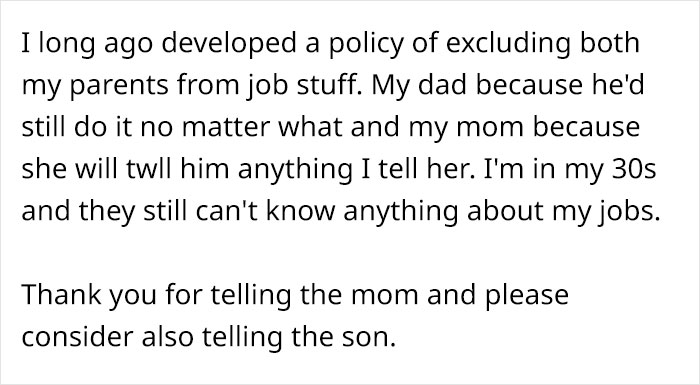 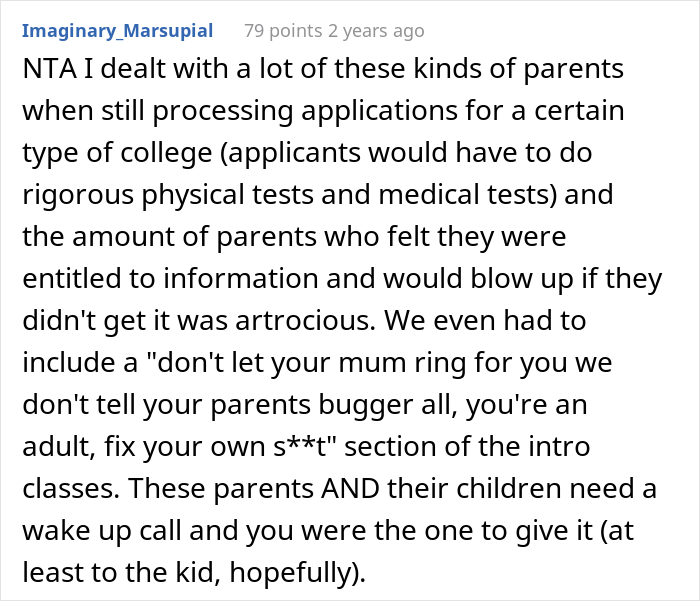 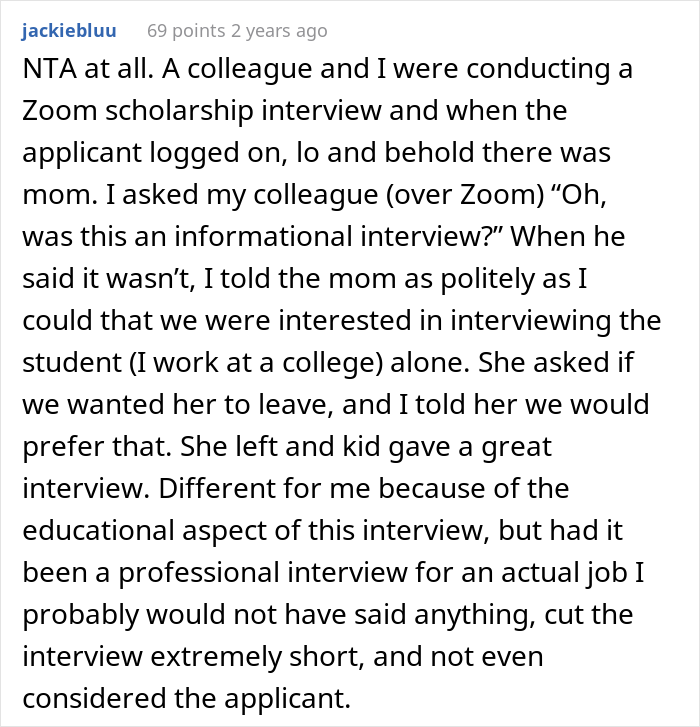 But some users disagreed and shared a different opinion 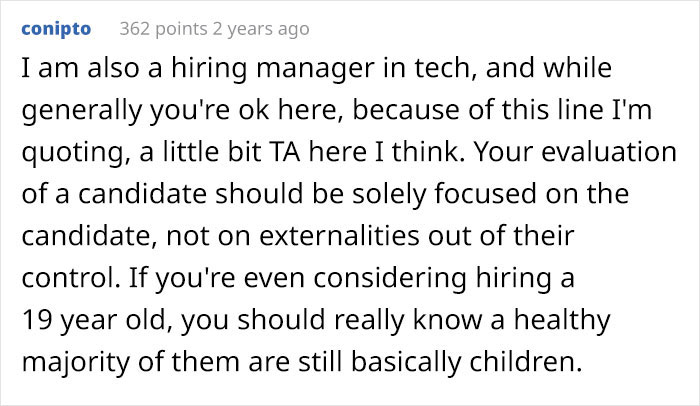 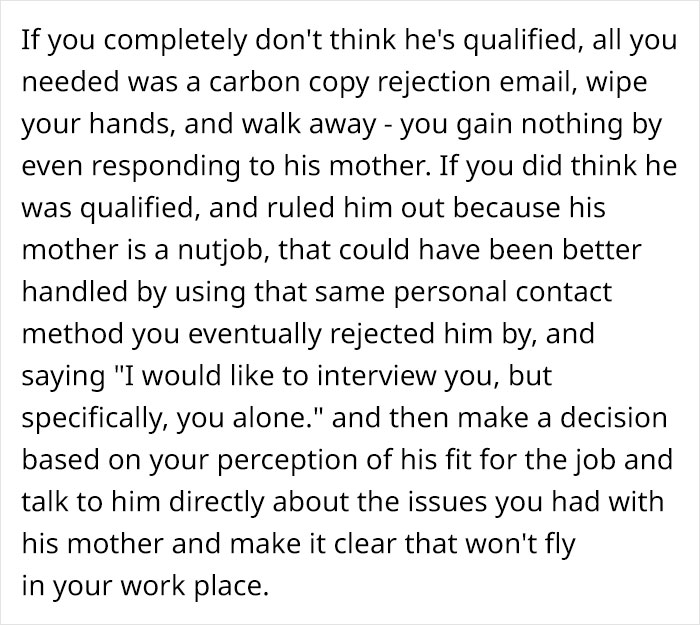 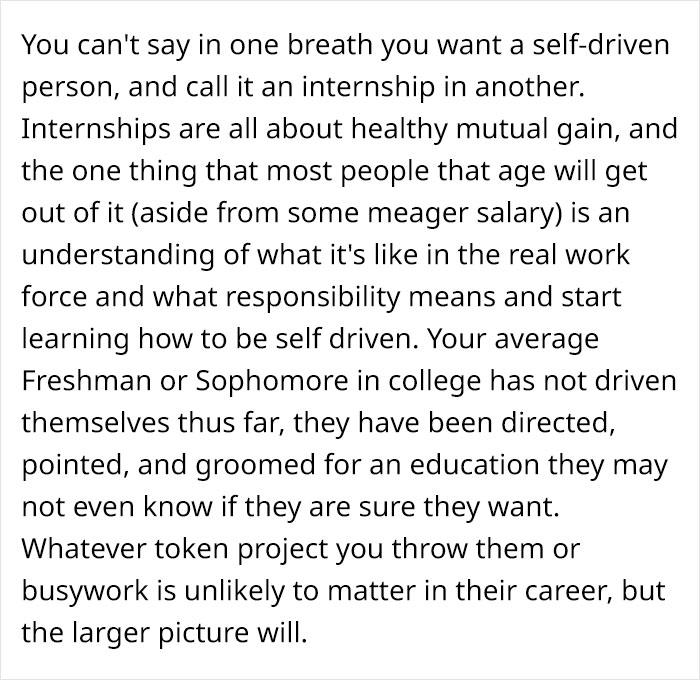 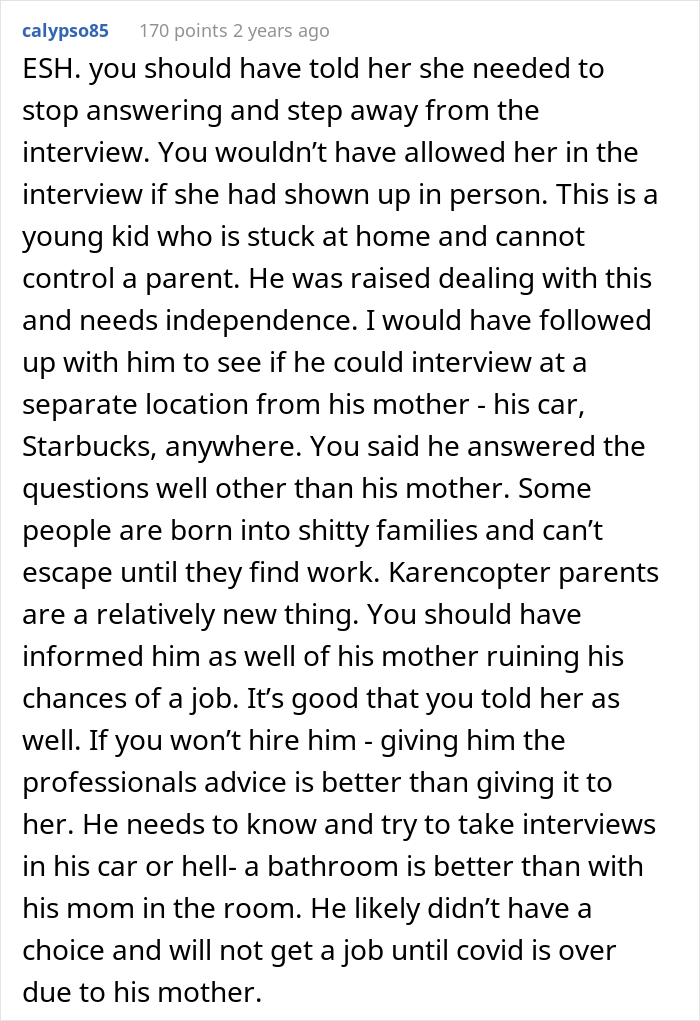 The post Mom Furious After She Found Out Her Son Didn’t Get The Job Because She Answered For Him During The Interview first appeared on Bored Panda.