Bullying is usually associated with teenagers, but it’s a behavior that can be observed in various age groups. The difference is in the way the bullying manifests. Usually small children don’t get violent, but use hurtful language or lie. Because adults know how bad bullying can be, this behavior in comparison doesn’t seem that serious and can get brushed off.

It’s difficult when the parents don’t realize that this kind of behavior is actually bullying and if it’s not fixed now, it can grow into a much bigger problem. This woman seems to be contributing to the problem as she tries to convince her daughter’s classmate’s mom that her child bullying her daughter is not a reason to leave her out of the party that everyone was invited to. 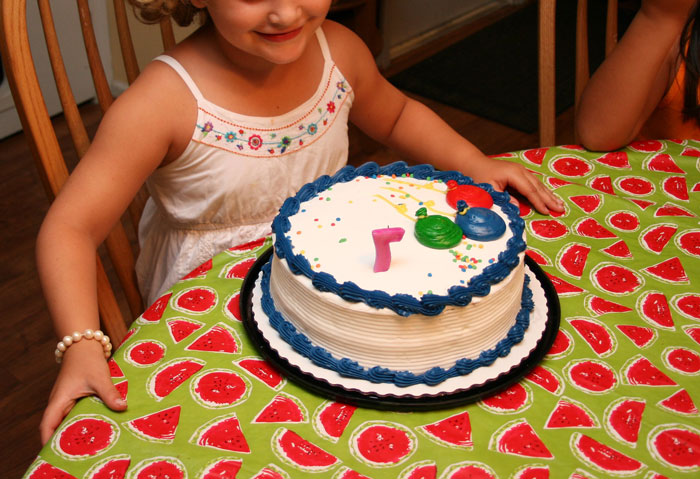 The Original Poster (OP) has a 7-year-old daughter who goes to a small private school and has 20 other kids in her grade. Payton’s birthday is next month and her mom is planning a party for her, so she gave out invitations to the parents of the girl’s classmates.

The kids are pretty excited about it because Payton’s birthday parties are already known to be really fun. The mom actually hired a party planner and allowed Payton to go wild with her vision.

In a reply to a comment, the mom revealed what that vision was: “It’s Barbie-themed but with princess appearances instead of a Barbie appearance. And a superhero appearance for the boys. Spider-Man will meet Ariel. There’s face painting, she wants a Barbie box for pictures with a balloon arch around it, everything is pink. Someone to come do balloons, but not a clown because some of the kids are scared of them and an ice cream, cupcake, donut bar where the kids can decorate their own. A big white bouncy castle with pink balloons on the side. Oh, and she said a magician would be nice. We also usually have a DJ and then she’ll be choosing the food this weekend. She said, ‘Mommy, that’s just some of my ideas right now.’” 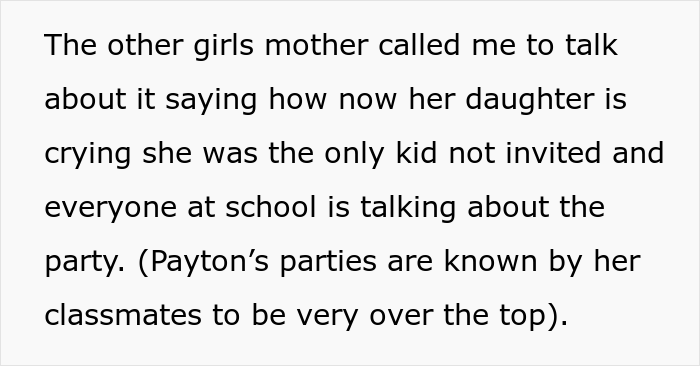 It will be a lavish party for sure, but one person in the class was purposefully uninvited. It was Payton’s bully. This girl would say that Payton is ugly, chubby and wouldn’t allow her to play with other girls, among other things.

The bullying was constant and the OP had several meetings with the girl’s parents and the school, but it seems that the matter wasn’t settled and that the other girl’s parents didn’t understand the gravity of the situation, judging from their exasperated reaction to finding out that Payton didn’t want the bully at her party. 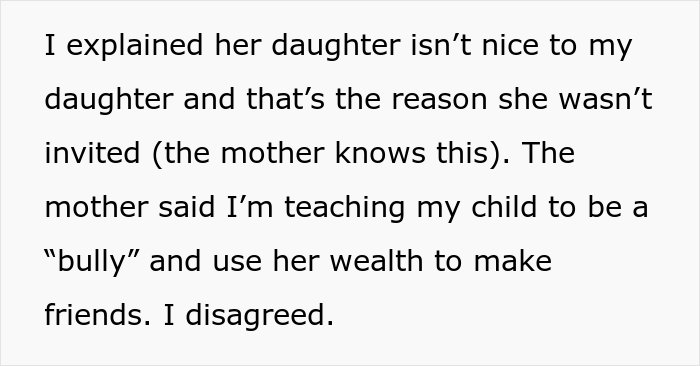 Who would want their bully at their party? The bullied person knows they don’t like being around them, the bullies make them cry, they are afraid of them and they are definitely not friends, so it’s only logical that they are not invited.

The OP explained to the mom that the girl isn’t welcome at the party because of her daughter’s previous behavior and she is sorry that her child is upset, but it’s Payton’s birthday and she deserves to be happy and comfortable at the party.

However, the bully’s mom thinks that making her daughter the only one not invited makes her the bullied kid

However, the OP is a mom too and she does feel sorry for the girl because she is feeling excluded and won’t be able to have fun at this extraordinary party. On the other hand, people in the comments reminded the mom that actions have consequences and because she was bullying her daughter, she won’t be allowed at the party.

A retired psychologist also joined the conversation and shared their insights: “Based upon your comments I’m going to say that this is one of the few appropriate reasons to exclude a single child from a party. The bullying issue has been ongoing and has not improved despite meetings and conversations with parents and school, right? Why on earth would it ever be expected that you would invite your daughter’s bully to your home to celebrate the life of your daughter?”

They added that not only will the bully learn that bad actions have repercussions, but Payton also is correctly taught to have boundaries and not to give in to someone’s cries about feeling bad as if they weren’t the ones who earned such treatment.

Payton’s mom understands that the bully is just a kid who wants to go to a party, but her daughter deserves to have a carefree party 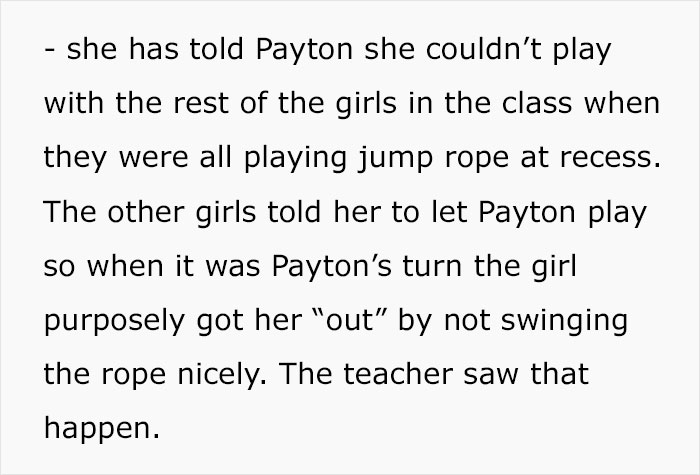 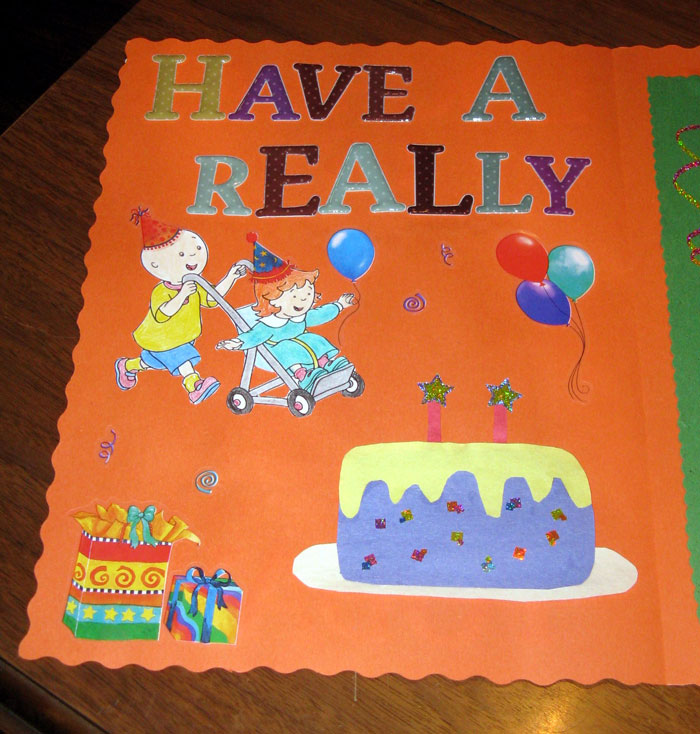 We would like to hear your thoughts about this situation. Do you think the bully’s mom truly doesn’t think that her daughter has done anything wrong? Or maybe she understands but doesn’t want her to face the consequences? Let us know your theories in the comments. 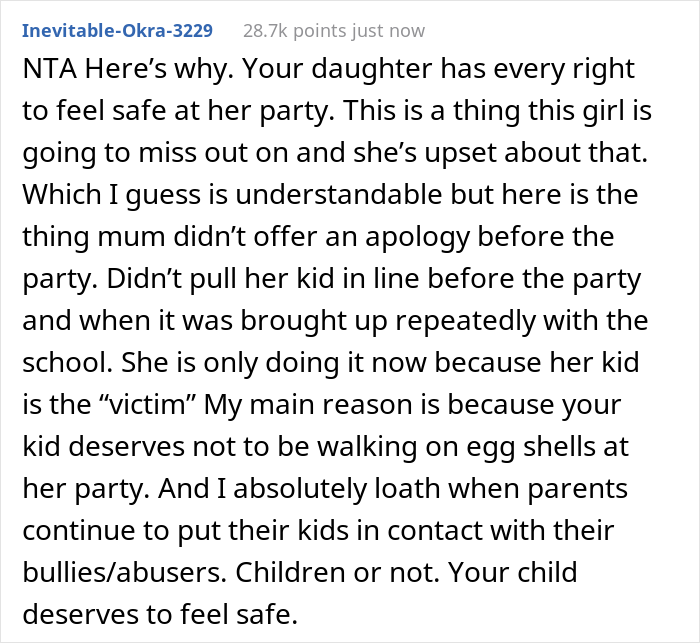 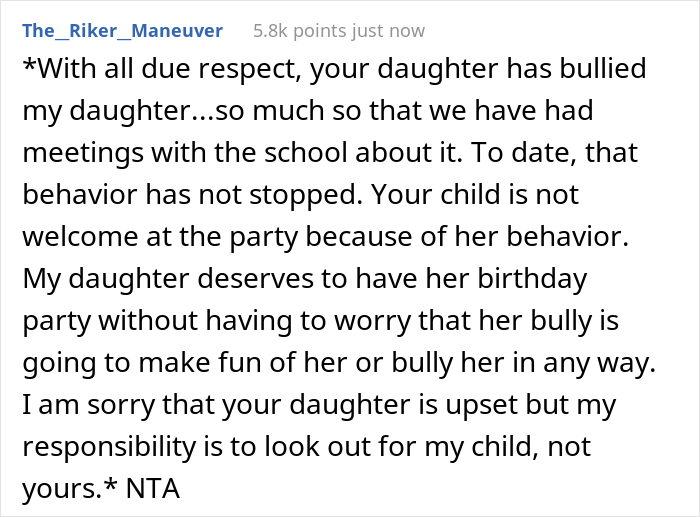 The post Mom Livid Her Daughter Was The Only One In Her Class Not Invited To A 7-Year-Old’s Birthday Because She Bullied The Birthday Girl first appeared on Bored Panda.