Every year, like clockwork, the moment that Halloween ends, everyone goes nuts about Christmas (sorry, Thanksgiving!). Shopping centers redecorate overnight and pull out their Xmas stock(ings), ‘Jingle Bells’ starts following you around wherever you go, and you might feel a small tightness in the pit of your stomach telling you, “It’s time to start buying everyone gifts.”

However… you could do away with part of that holiday shopping stress almost altogether. Angie Wipf, a decluttering expert and mom of 8, has gone viral after sharing on Instagram that she no longer buys her kids Xmas presents. Instead, she’s created an entirely new system of gift-giving that’s far less expensive and puts the emphasis on family traditions instead of just physical gifts.

According to the Canadian mom, her kids are happier than ever, she’s saving a ton of money, and it’s all helping keep their home clutter-free. Anyone living with a larger family knows that the issue isn’t always about money, rather, spending quality family time together and having enough space to move around. 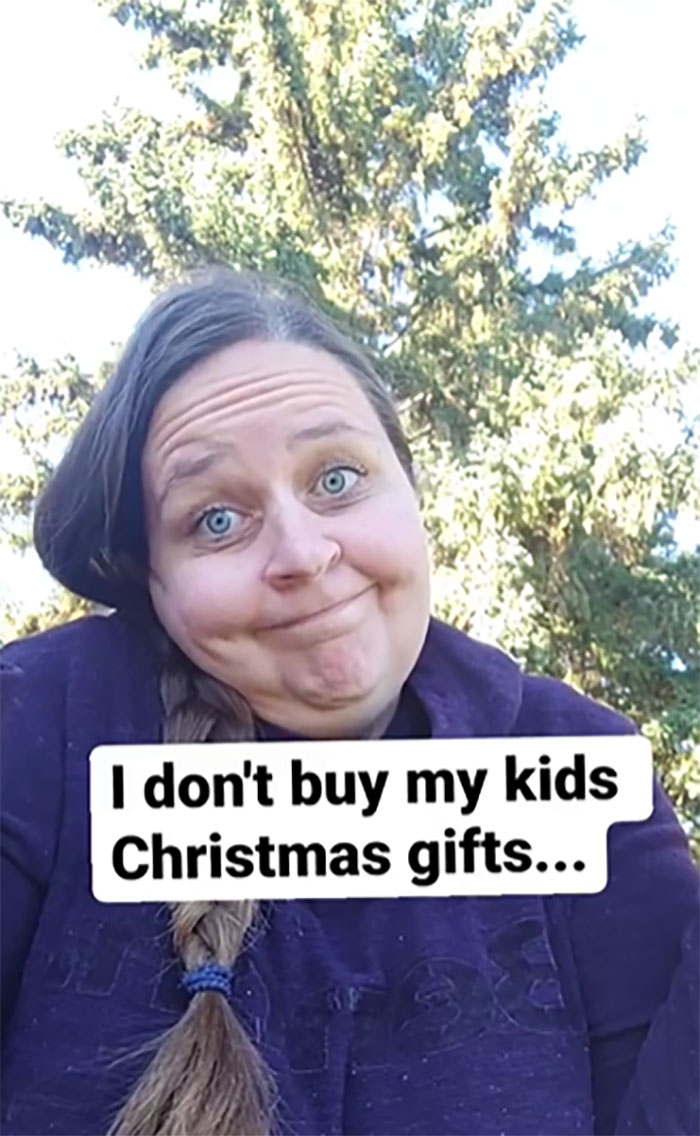 Things were getting out of hand, so she decided to rework the way her family celebrates Xmas 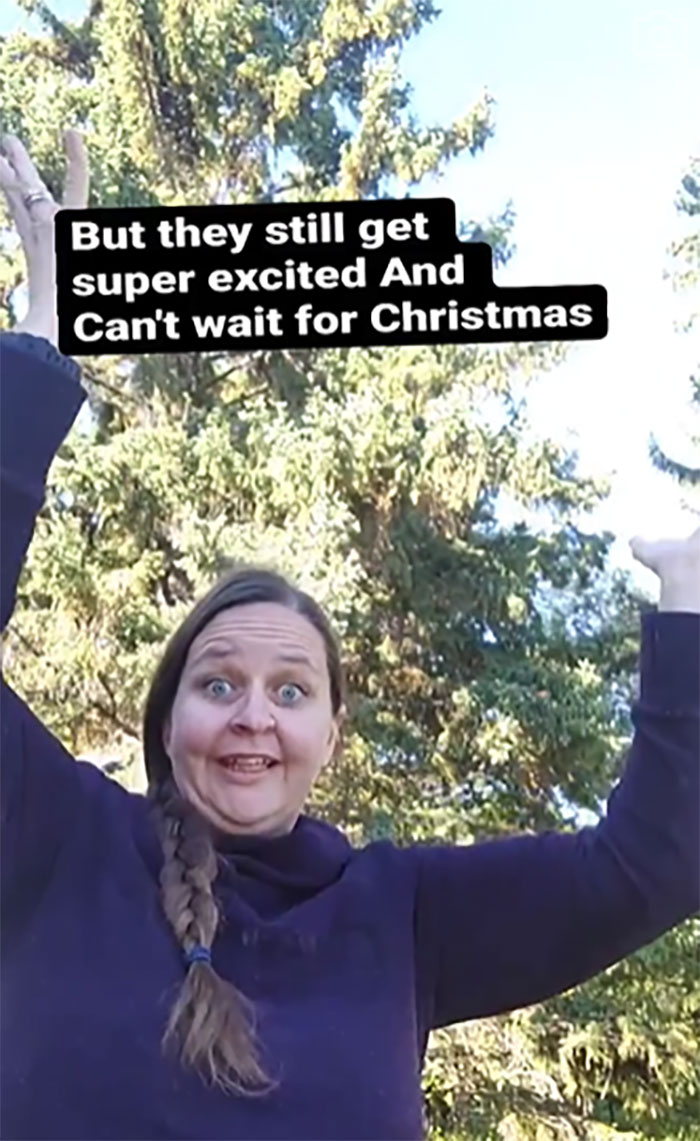 Since making the change, Angie says that her kids are happier than ever 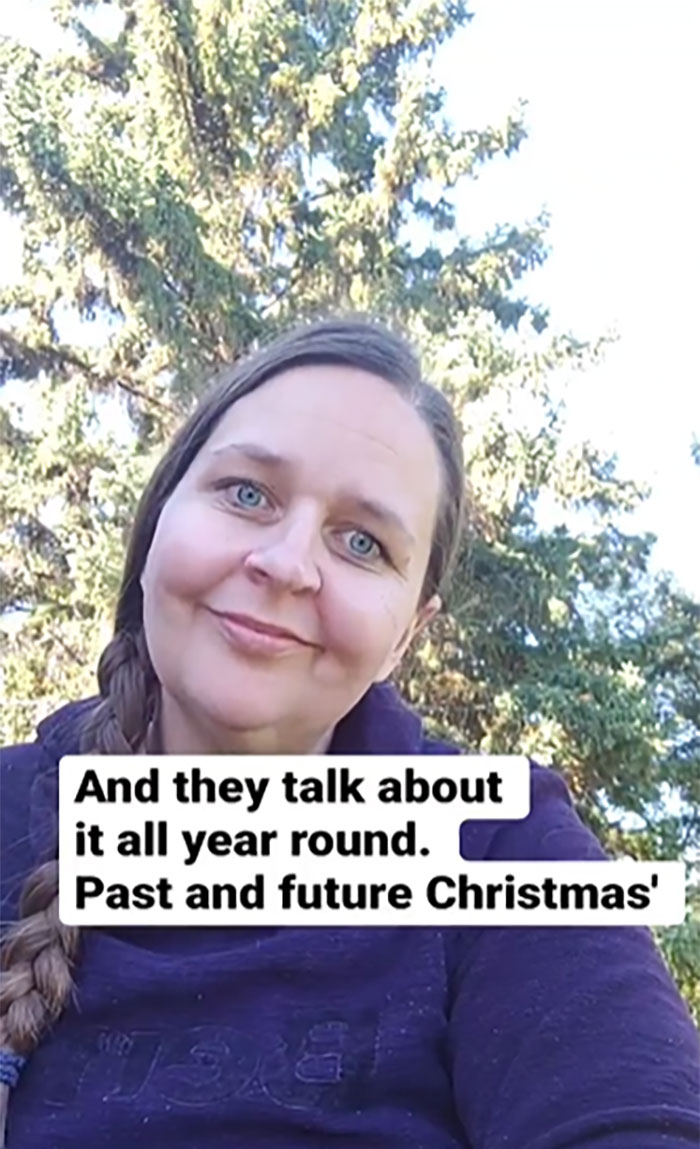 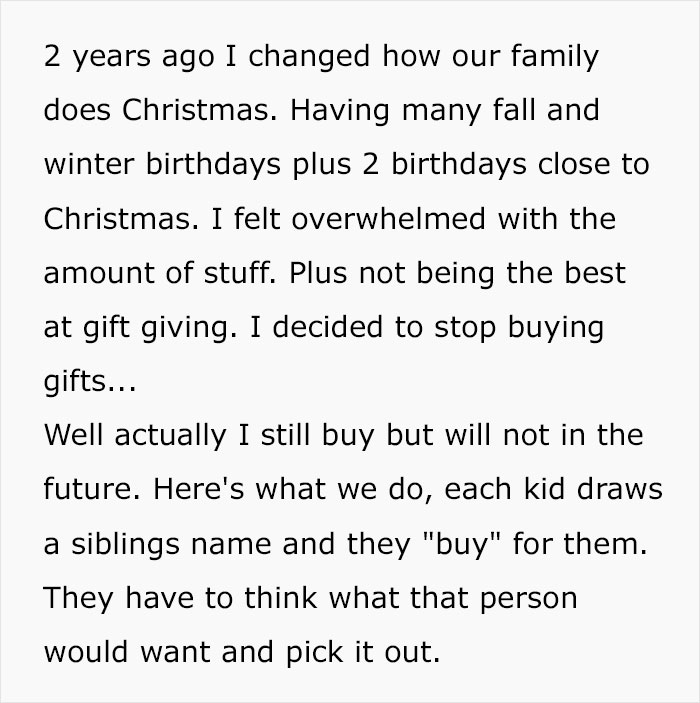 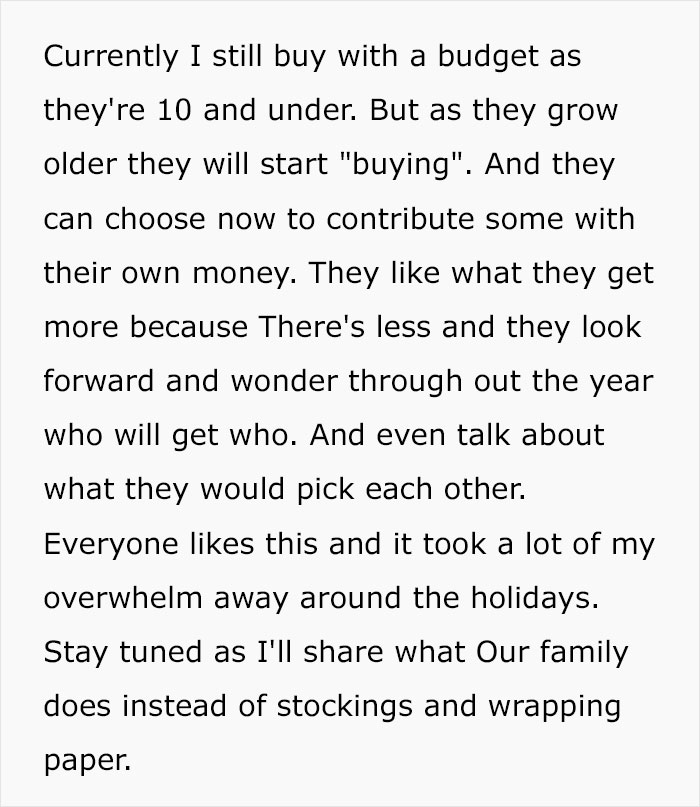 The 35-year-old mom has 8.8k followers on Instagram and her post, written in September, got nearly 63k likes. Angie explained in her post that she felt overwhelmed with all the autumn and winter birthdays, as well as the rush to get everyone their Xmas presents. That’s why 2 years ago she completely flipped the script and decided to stop buying gifts.

Instead, she’s introduced a Secret Santa-style system where her kids draw each others’ names and get them gifts (don’t worry, the parents still pay for them while they’re little). That way, there are fewer new items entering the family home and everyone’s far more excited to get their one gift. While many parents fully supported Angie, others weren’t so sure about her methods.

According to The Sun and The Daily Mail, Angie’s new system lets her save around $700 per year. That’s quite a sum! Before the change, she’d end up buying over 40 presents for her kids. With so many presents all around them, the little munchkins would focus only on one or two of them.

We’ve all been there, haven’t we? Too many gifts isn’t always the blessing we think it is. Now, there’s less stress for Angie and the kids can give the presents they get from their siblings their utmost attention.

Here are a few photos of the family 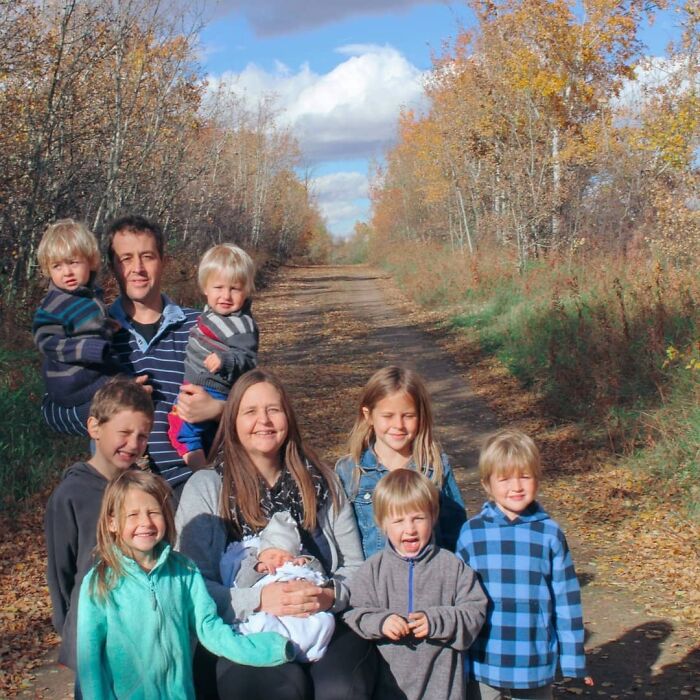 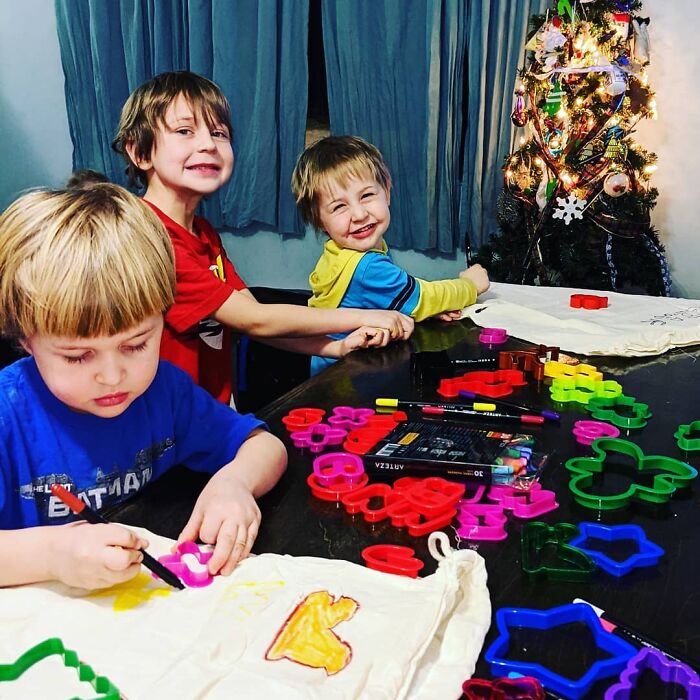 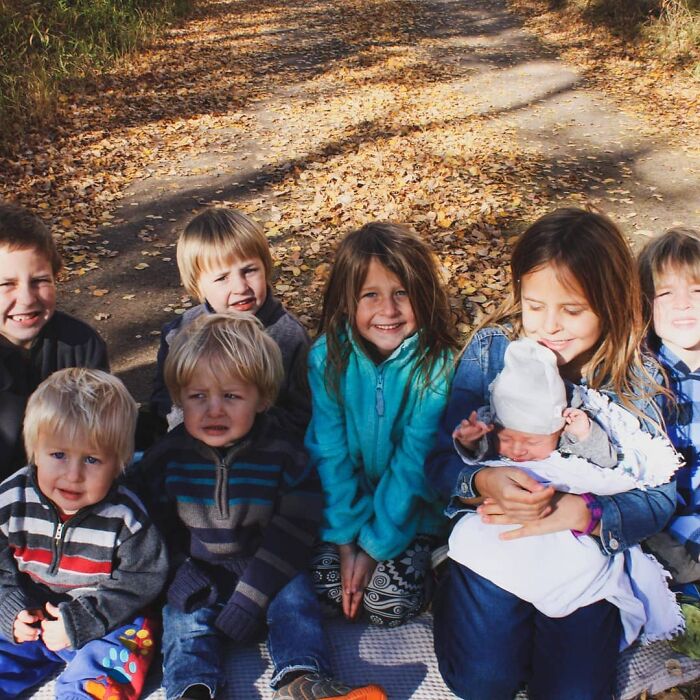 “I just noticed that when they would open a lot of presents, they only noticed the one they really wanted and forget about the rest. They would forget about the stuff and not care about it, and it was kind of disappointing to see that. I think it’s taken the stress away from kids, they’d be so overwhelmed with stuff they wouldn’t know what to do. “I think as an adult you remember more the things you did rather than what you got,” she told The Sun.

“We work hard to make sure birthdays are separate from Christmas so we can focus on their birthday. I found they were getting so overwhelmed, all these gifts all the time,” the mom explained. She added that her kids remind her when it’s finally time to draw names. That’s when she and her husband Paul sit down with them and have a look on Amazon for what they’d like to get their siblings.

“I found they enjoy what they get more because they’ll talk to their siblings throughout the year about what they like. I think they realized they still get presents from grandparents and all that, they’re definitely not deprived that’s for sure!” 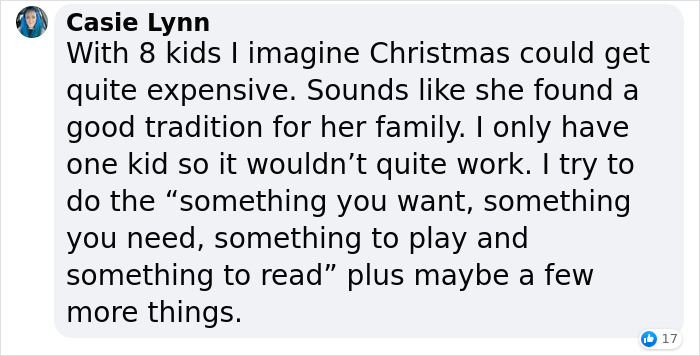 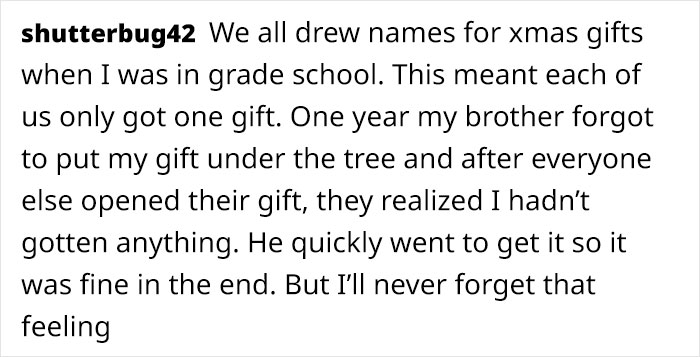 The post Mom Of 8 Goes Viral After Sharing That She No Longer Buys Her Kids Christmas Gifts first appeared on Bored Panda.