Some days are bigger than us. They demand putting our ego aside and just sucking it up. But when Reddit user BallFinal2037‘s daughter’s wedding came around, the woman couldn’t be happy for her. For whatever reason, she thought of it not as a celebration of love, but rather as an opportunity to get revenge on the bride.

However, it was the woman’s husband who confronted her about it, stirring up doubts in her mind. So she turned to the subreddit r/AITAH (which is a lot like the popular r/AITA) to describe the situation and ask its members for unbiased opinions on the matter. Here’s what she wrote.

Instead of celebrating her daughter’s wedding, this mother wanted to get back at her for all the times she disrespected her with her attire 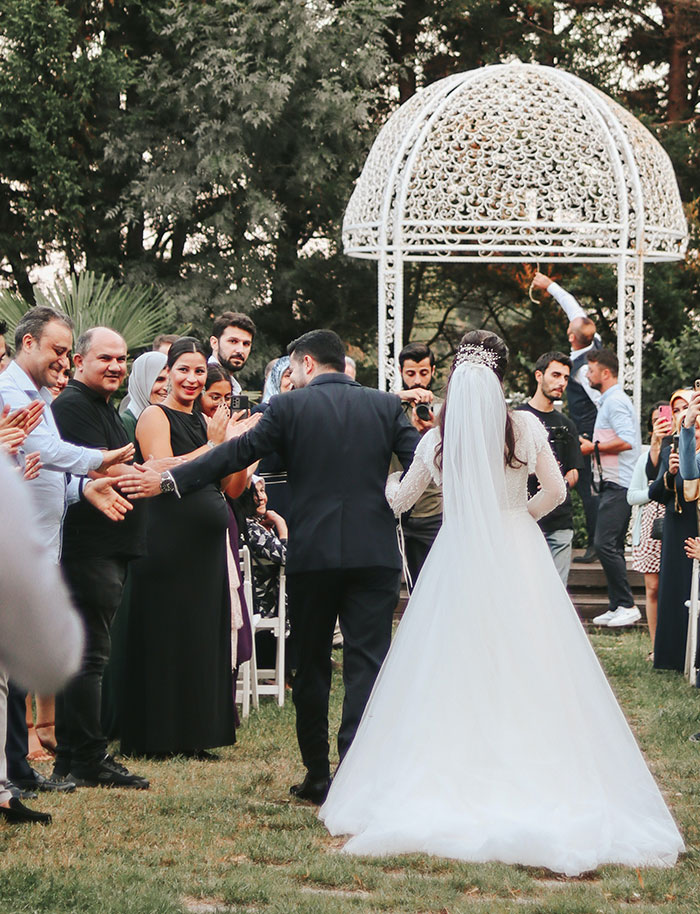 So the woman purposefully put on a pair of jeans 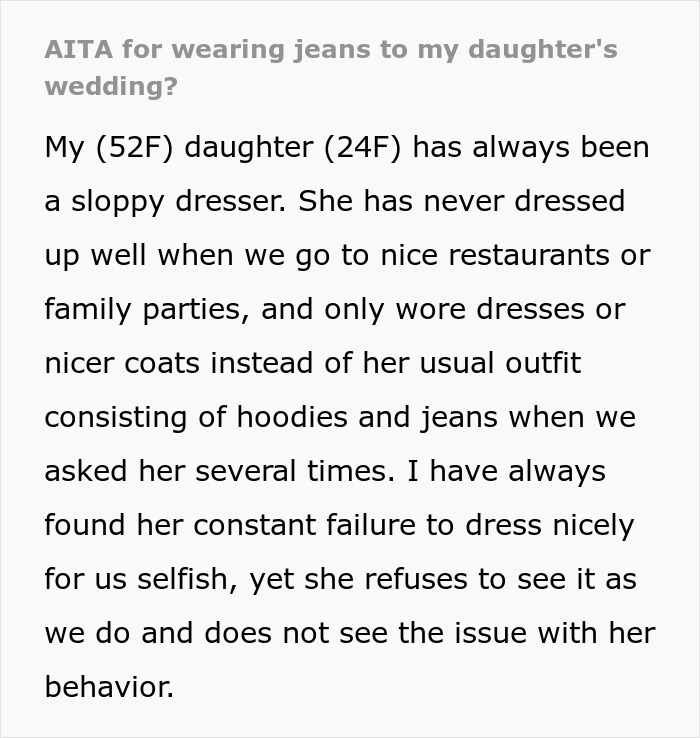 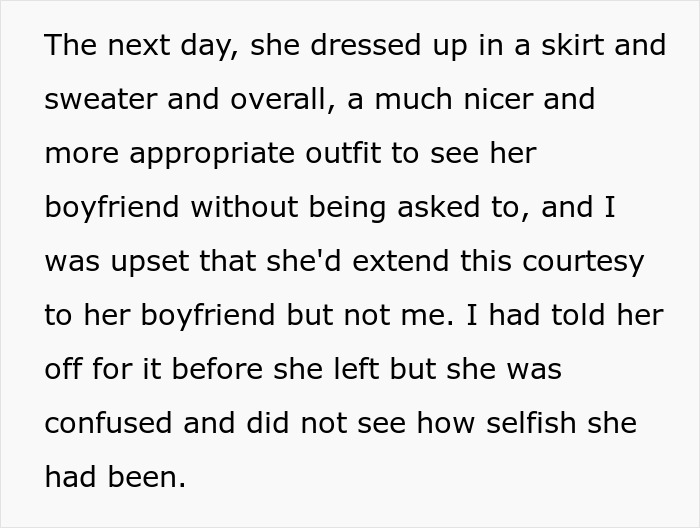 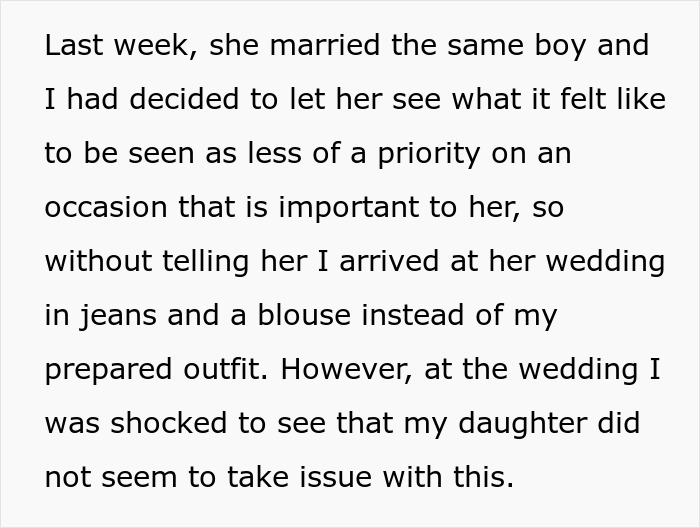 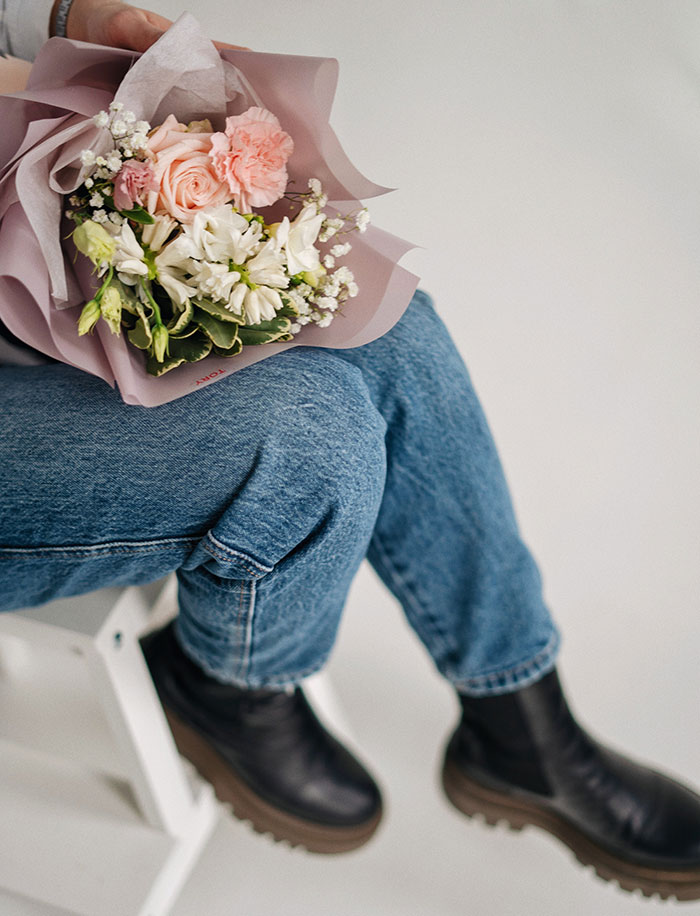 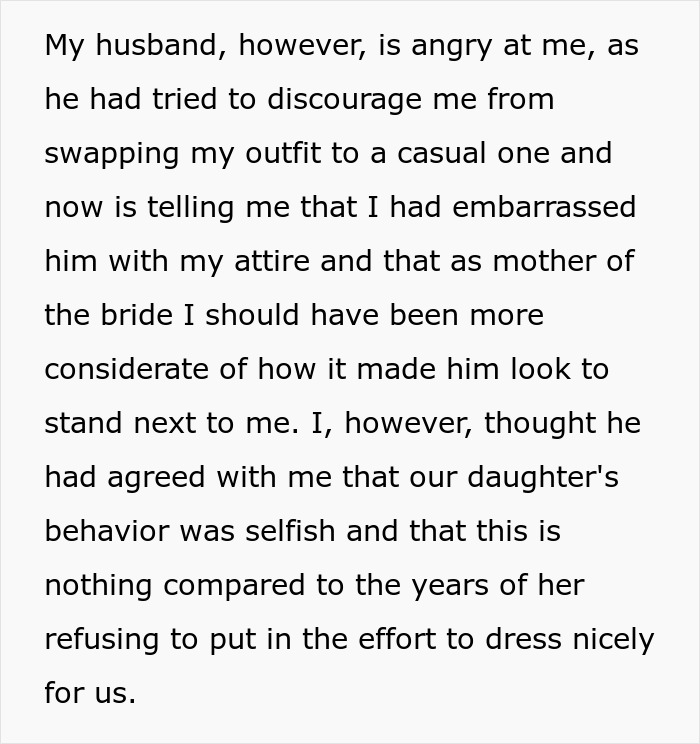 According to Elaine Swann, lifestyle and etiquette expert and founder of The Swann School of Protocol, it’s usually better to overdress for a wedding than underdress. However, before one makes their final decision, they should read the room. For example, don’t wear a tux or a ballgown to a backyard wedding—in that case, it’s better to keep it a little more low-key.

Swann also thinks the location has a lot to do with what you should wear. If it’s a destination wedding, then you know that you’d be wearing resort-style attire. But if it’s going to take place at a high-end hotel, then that’ll give you another idea of the theme.

The other indicator that helps determine your style is the time of day the ceremony is taking place. Earlier in the day, you’re going to find that the attire is going to be less formal, which means more bright colors and flowy fabrics, while later in the evening is when you’ll get to that formal attire where you have black and gold hues, beads, and sparkles.

Of course, this is all generally speaking, but these are good guidelines to follow, and judging by them, the author of the post really did miss the mark.

Yes, pettiness is part of being human. In fact, the 2019 Society for Human Resource Management (SHRM) Pettiness in the Workplace survey found that 97 percent of people report having engaged in petty behavior. However, we should be able to rise above it, especially when we’re talking about the people closest to us.

People thought the woman was acting like a spoiled child 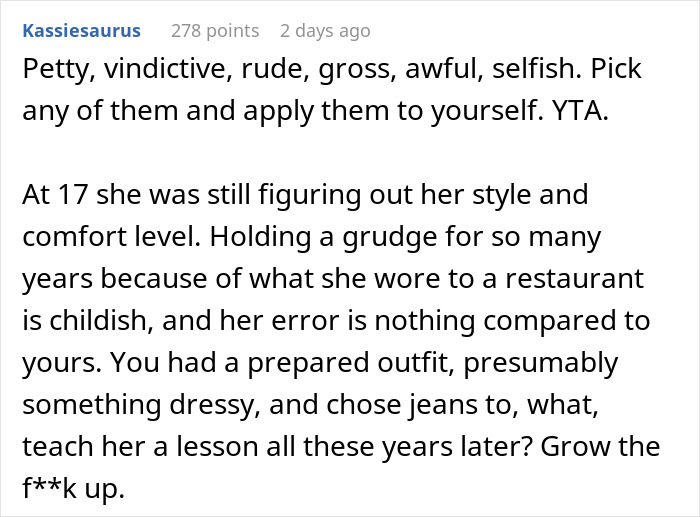 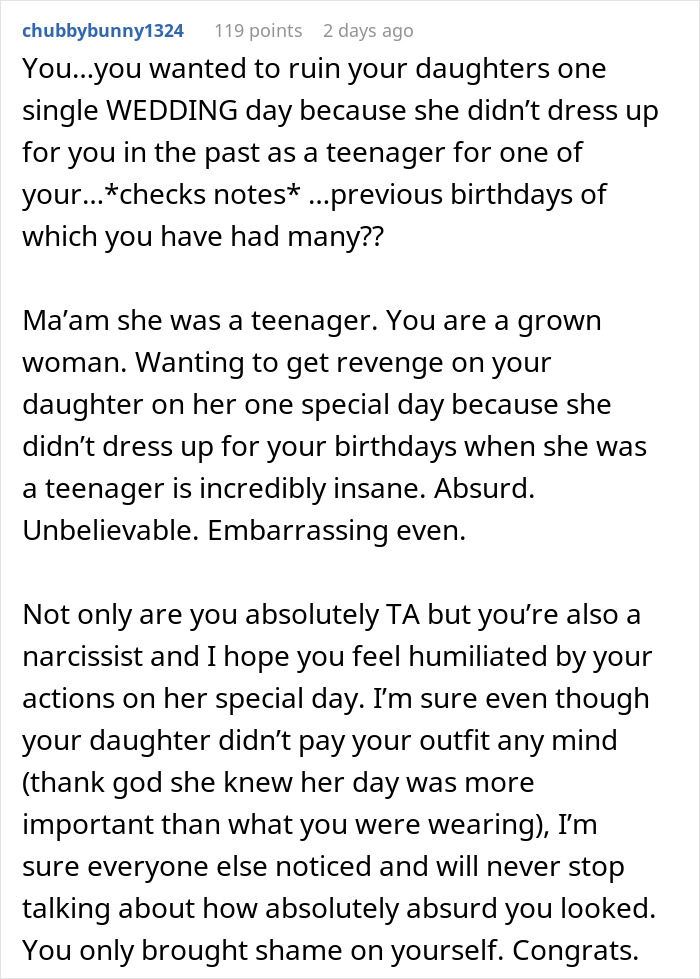 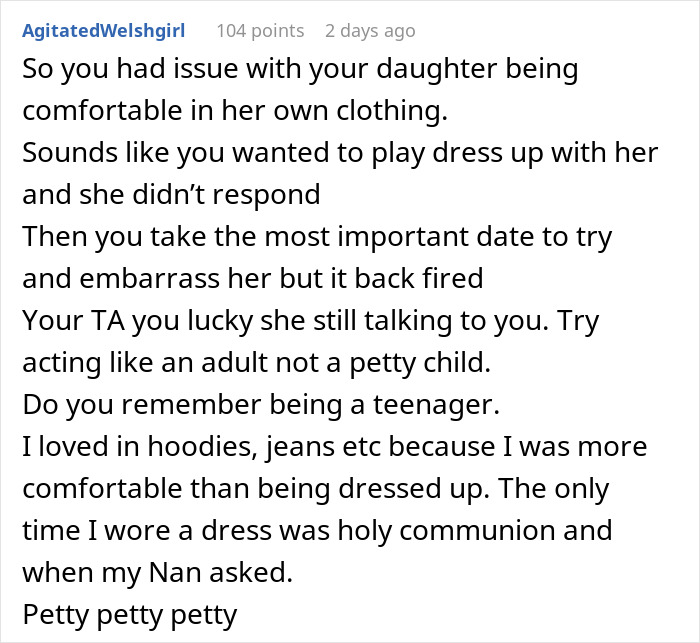 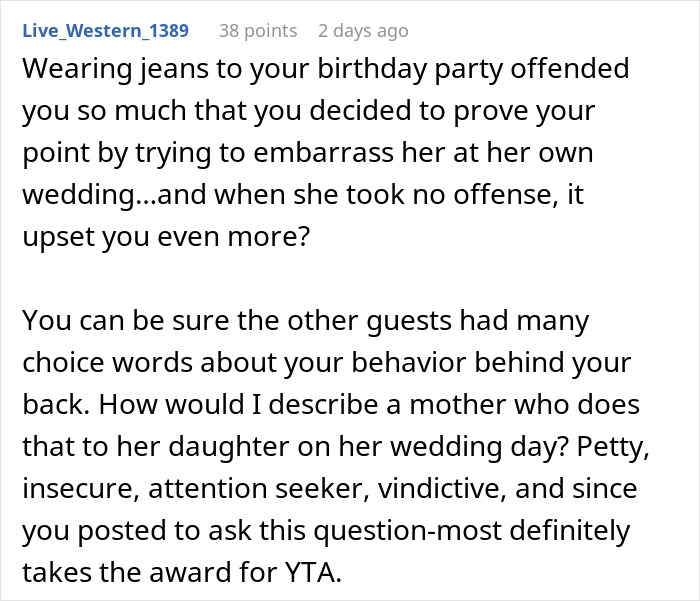 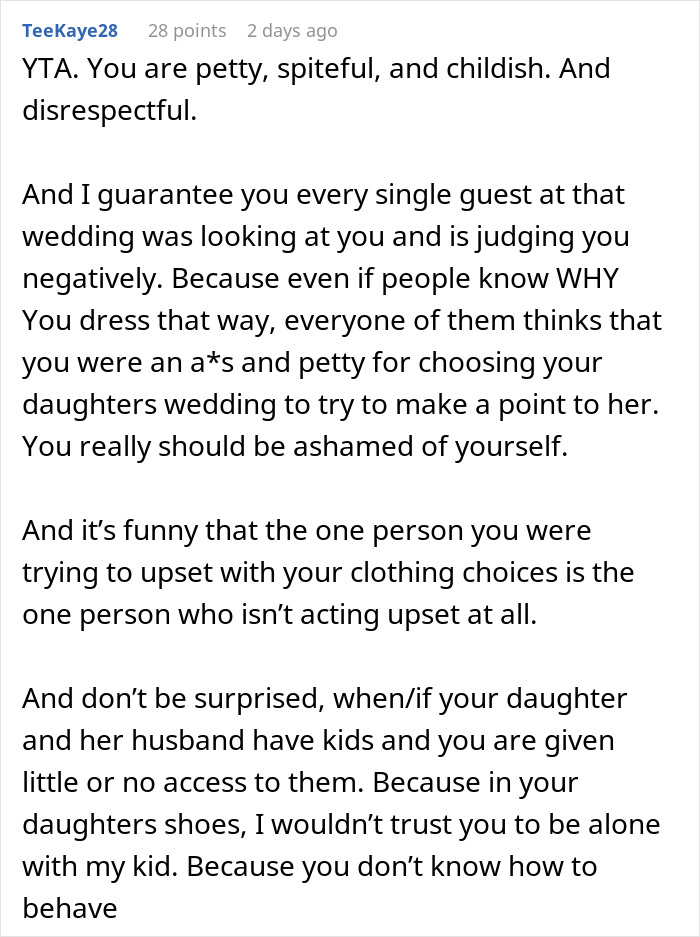 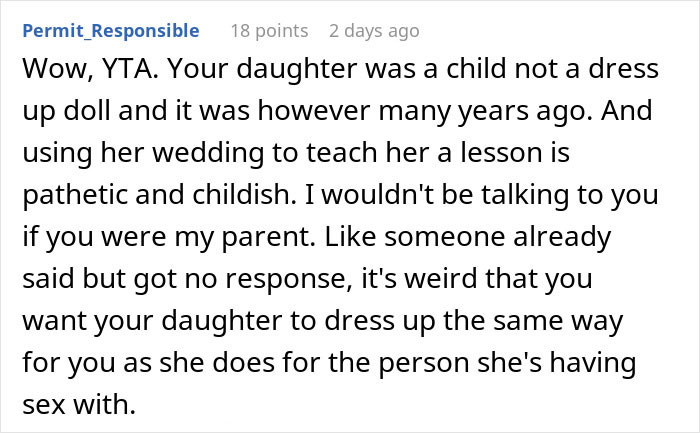 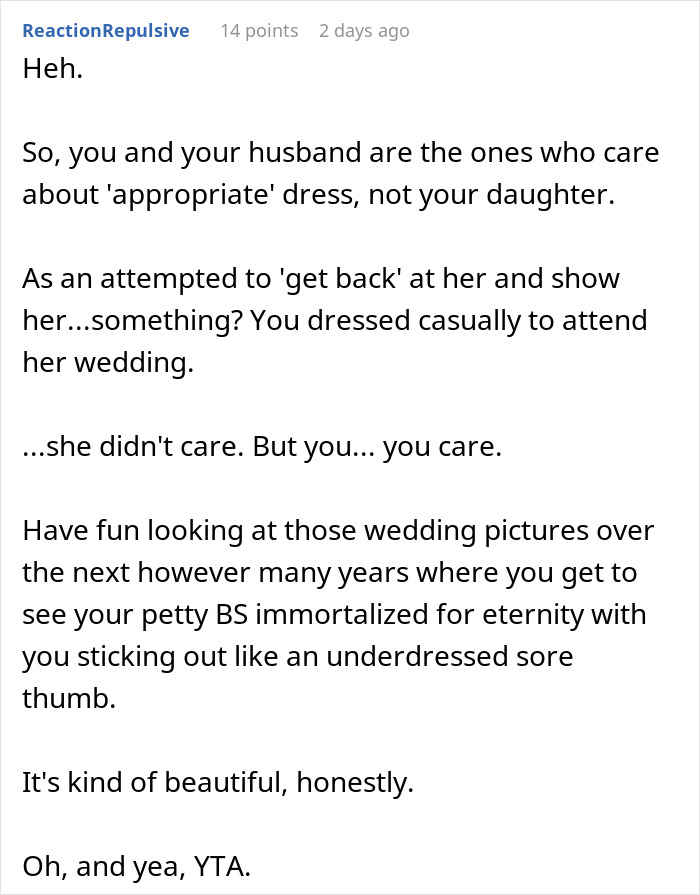 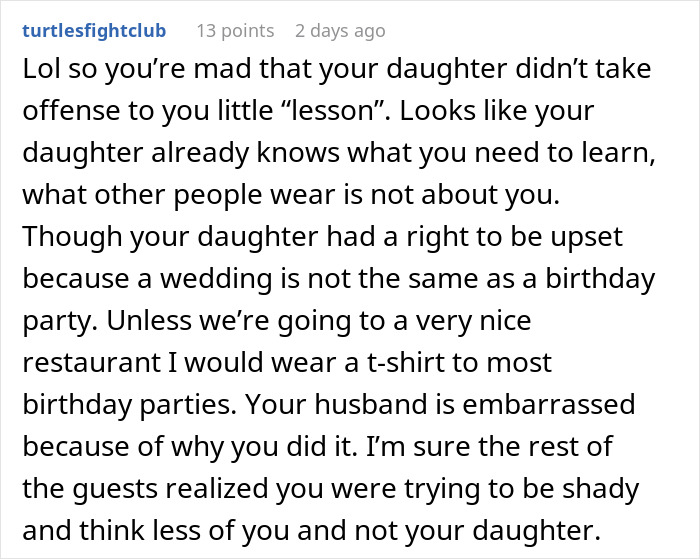 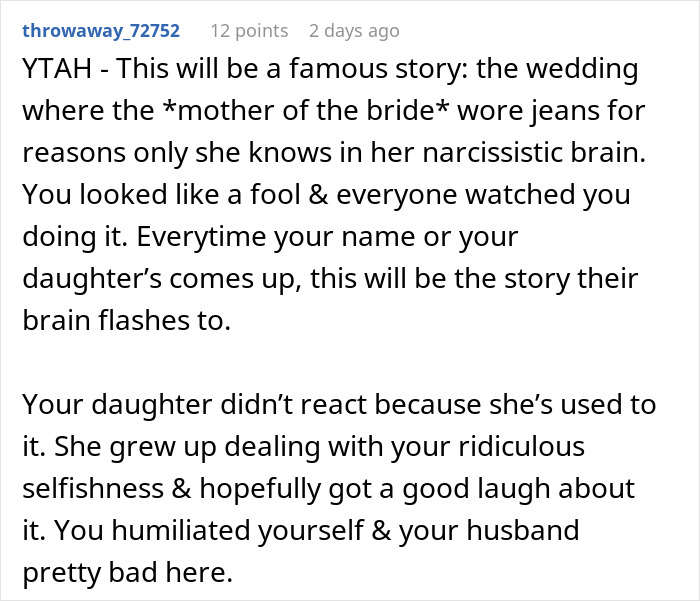 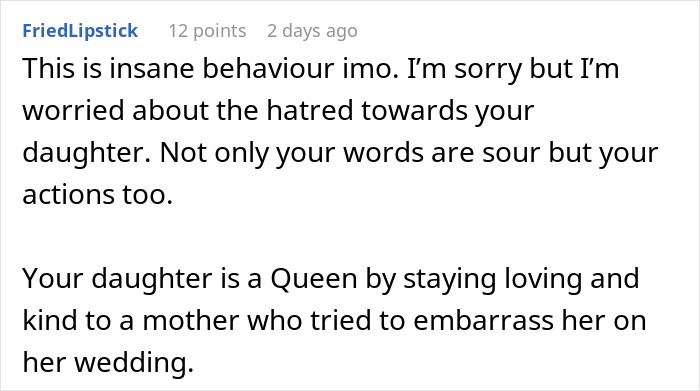 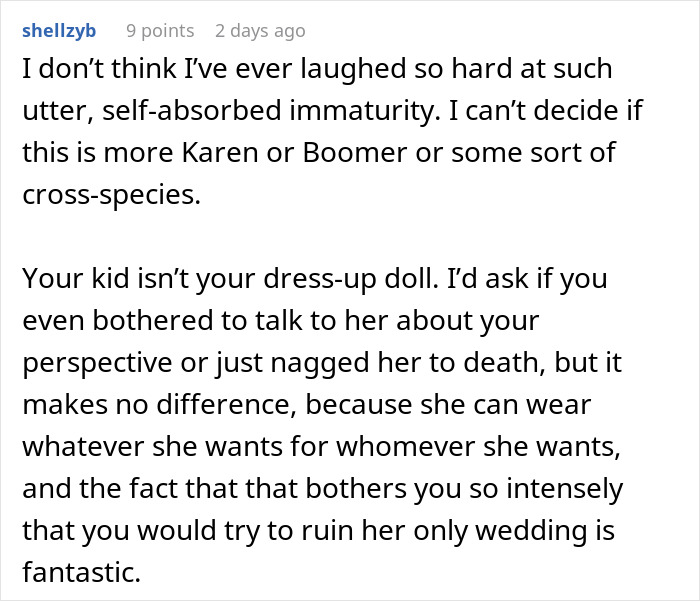 The post Mom Wonders If She’s A Jerk For Wearing Jeans To Daughter’s Wedding To Prove A Point, Gets A Reality Check Online first appeared on Bored Panda.