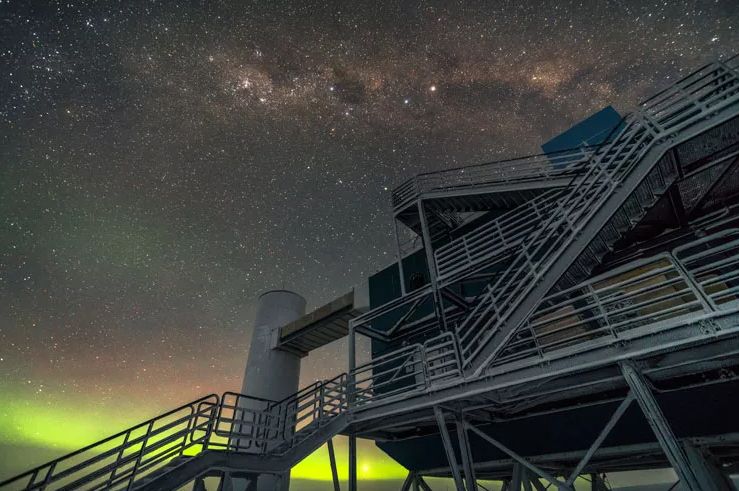 It’s not what we view as monsters, worry not. Researchers have just confirmed the details of a collision that occurred in 2016, when the IceCube Neutrino Observatory was able to detect the most energetic antimatter particle ever. The ultralight particle smacked into the Antarctic ice with the energy of 6,300 mosquitos, as LiveScience details:

This antineutrino, an antimatter counterpart of the wispy, difficult-to-detect particles known as neutrino, collided with an electron somewhere in the ice of Antarctica at nearly the speed of light. That collision created a shower of particles detected by the buried IceCube Neutrino Observatory — a facility responsible for much of the important high-energy neutrino research of the last decade, as Live Science has reported. Now, IceCube physicists report that that particle shower included evidence of a long-theorized but never-before-seen event known as “Glashow resonance.”

It’s usually difficult to wrap one’s mind around the numbers involved in high-energy particles. A single neutrino has a mass of about 2 billion-billion-billion-billionths of a gram, and thousands of low-energy neutrinos from the sun pass through your body every second of the day without noticeable effects. A neutrino with 6.3 petaelectronvolts (PeV) of energy is another beast entirely. According to CERN, the European physics laboratory, a teraelectronvolt (TeV) is equivalent to the energy of a single mosquito flying at 1 mph (1.6 km/h). And 6.3 PeV is 6,300 TeV. So turn that single mosquito into a swarm of 6,300 (or accelerate it to Mach-8.2, more than four times the top speed of an F-16) and you’ve got the energy of the single infinitesimal particle required for Glashow’s resonance.

Another way to think of 6.3 PeV: It’s 450 times the maximum energy that the Large Hadron Collider — CERN’s 17-mile-long (27 kilometers), multibillion dollar accelerator responsible for the detection of the Higgs boson — should be able to produce by the late 2020s following ongoing upgrades.