Last week we posted a shot of a peculiar Dutch bike rack I’d not seen before, with a hinged sheet that folds down to keep the saddle dry when it’s raining. 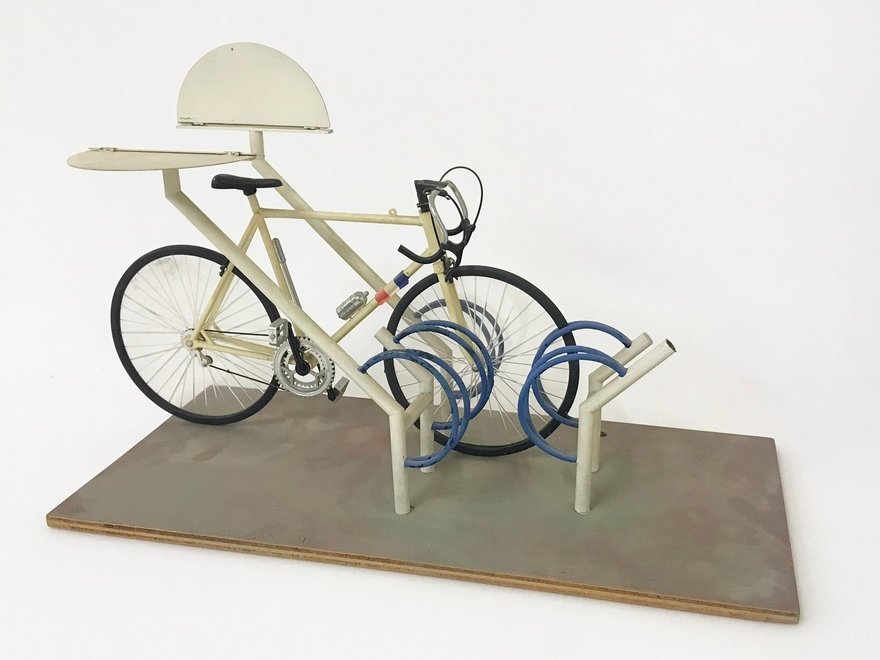 Its provenance was largely a mystery, with English-language searches returning no results. Helpfully, reader and designer Dries Wiewauters wrote in with illuminating background information on the design. Here’s what we’ve learned:

The racks were installed at a public library in the Dutch city of Apeldoorn in 1984, under a local initiative for the creation of street art. Still, this art would have function: Gijs Bakker, a furniture designer and jewelry artist commissioned by library architect Hans Ruijssenaars, was tasked with designing a bicycle storage solution that would keep 180 bicycles dry. In the common understanding, this means a roofed structure. However, the creative Bakker thought differently about the solution, as he explains in a statement (machine-translated from Dutch):

“I did some initial sketches, and quickly discarded the idea that the bicycles could only be kept dry with a shelter or enclosed space. The narrow width of the street in front of the library simply doesn’t have the space for an additional structure. It became clear to me that I had to aim for an open construction with a linear effect, and that keeping a bicycle dry simply comes down to keeping your butt dry.

“At that moment came the moving lids in the picture, which the cyclist can adjust to the weather. Next to their practical function, I found the lids especially attractive as a visual element: an aspect of mobility against the static character of the building. 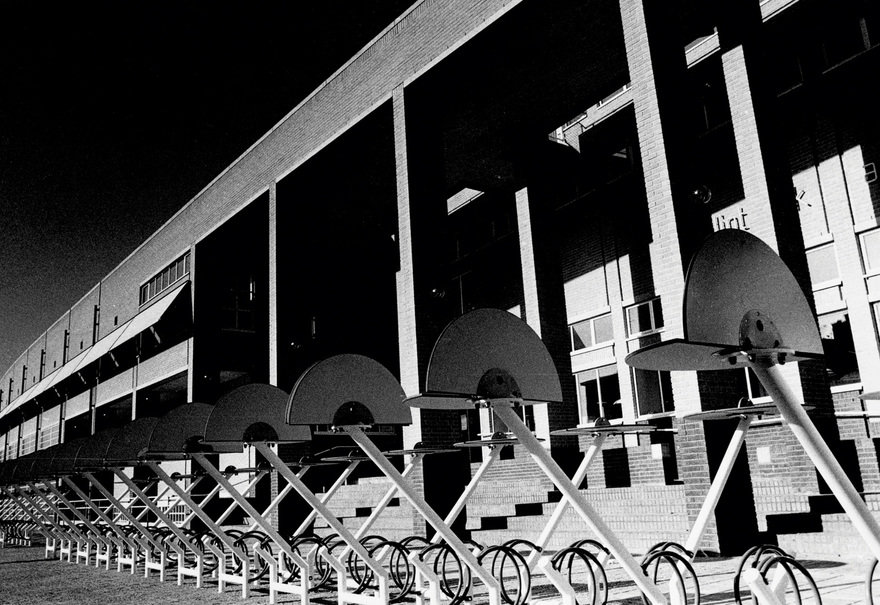 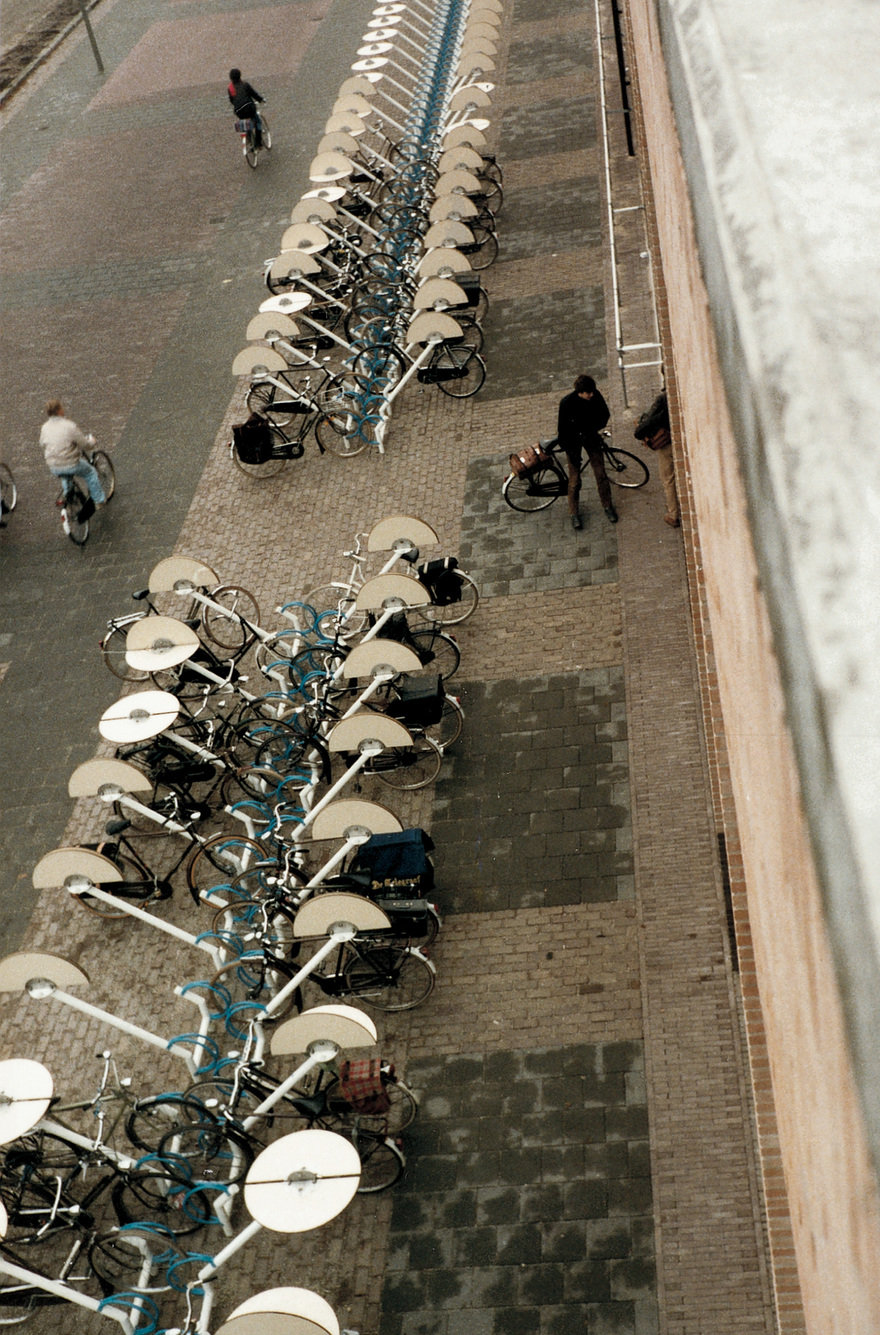 “The design was also a response to the horizontal and vertical lines of the building. The facade makes a curvature at a certain point, and that in turn determines the point where the bicycle parking had to end. Similarly, the color scheme of the racks are directly related to the main colors of the library. The beige covers refer to the sand-coloured facing brick, the white tubular frame corresponds to the white window frames. Only the clear opaque blue of the bicycle clamps was selected purely for emphasis. Finally, for the lids, a solid core plastic sheet was used.” 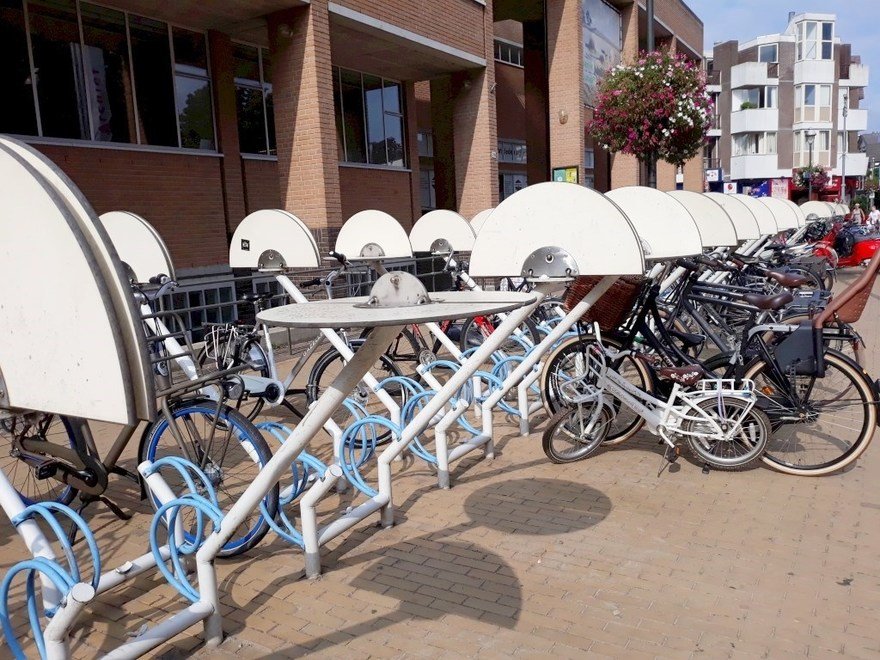 And in the end, Bakker writes, the design “had to be something that strings bicycles together in a playful way.”

Comments on the original post, which was light on information, were critical of Bakker’s design. Now that we have the designer’s intent, and an explanation of the context, I’m guessing the object looks very different indeed.

A special thanks to Wiewauters!