You usually get more out of holidays and celebrations when you focus on giving, not receiving. But be careful. Knowing that, people might try to take advantage of you.

And that’s exactly what Reddit user ThrowawayKev135, who, for the simplicity of this article, we’ll call Kev, has accused his mother-in-law of.

You see, Kev is well-off and likes to show his wife that he cares about her not only with words and actions, but, when there’s an opportunity, with things as well.

His mother-in-law noticed this and started pressuring the guy to start treating her too. It got to a point where she started demanding jewelry. Refusing to go down this path, Kev confronted her about it in front of the whole family, and the situation quickly escalated with him feeling alienated.

So, he turned to the “Am I the a***ole?” community and told what happened, asking its members if he was in the wrong. 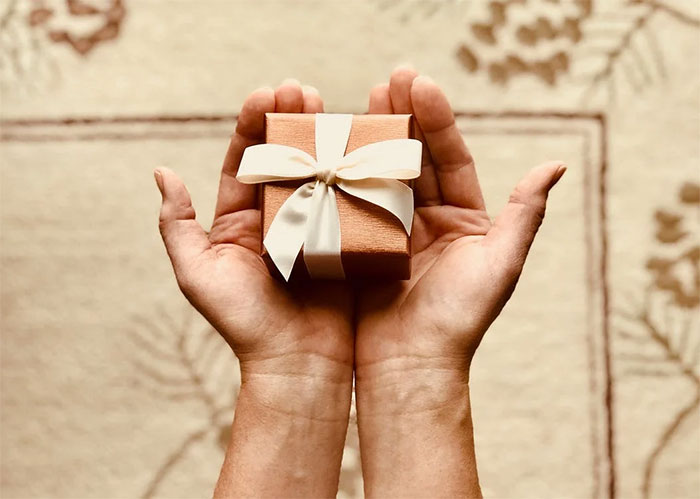 But this man would probably tell you it’s impossible 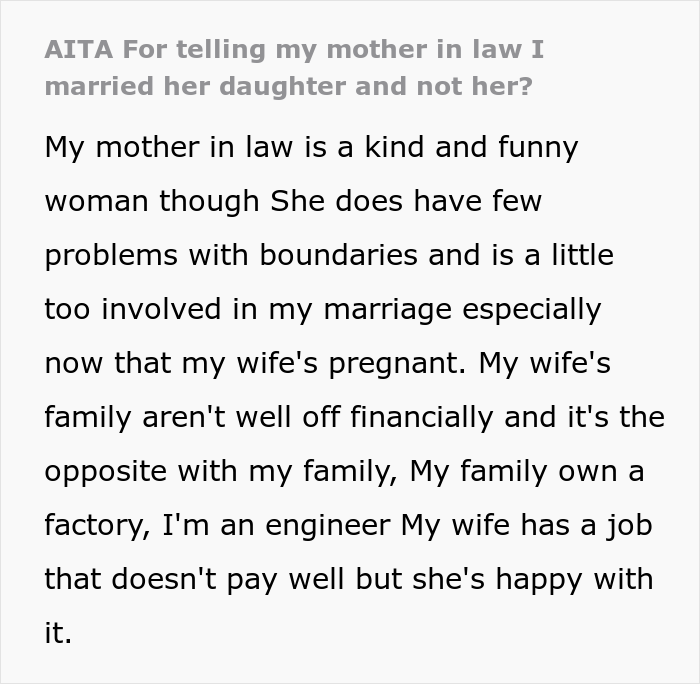 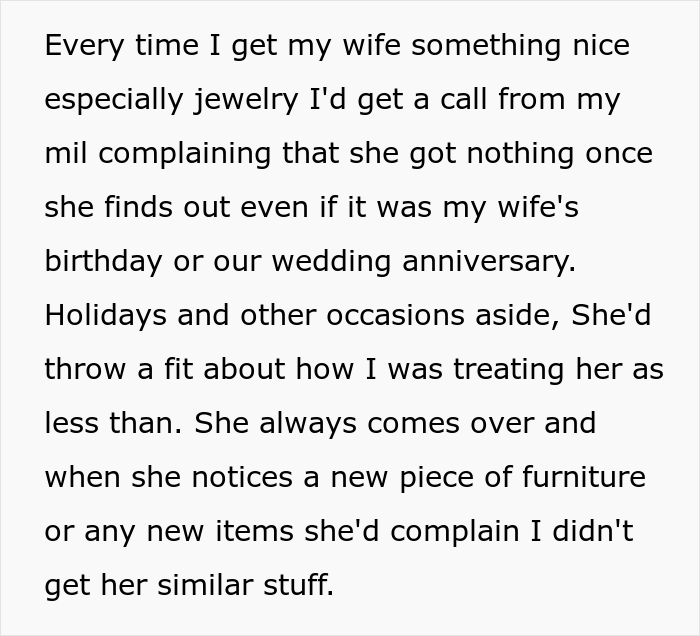 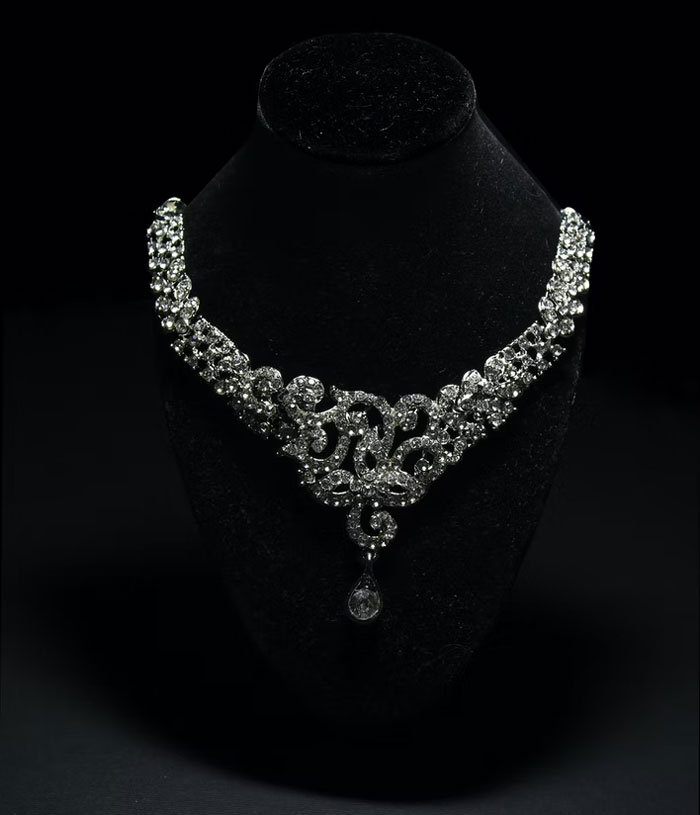 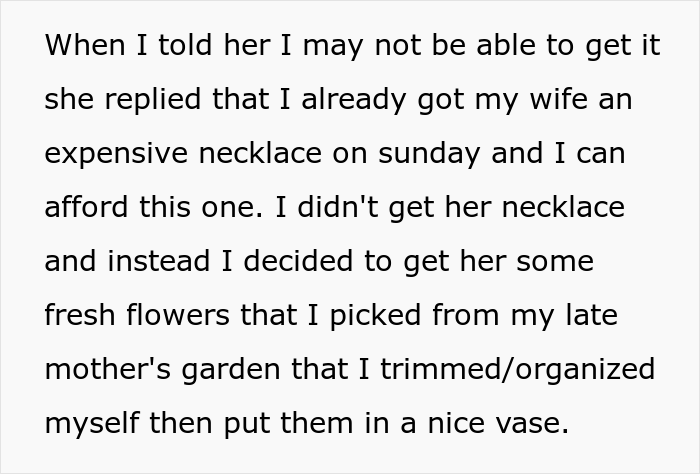 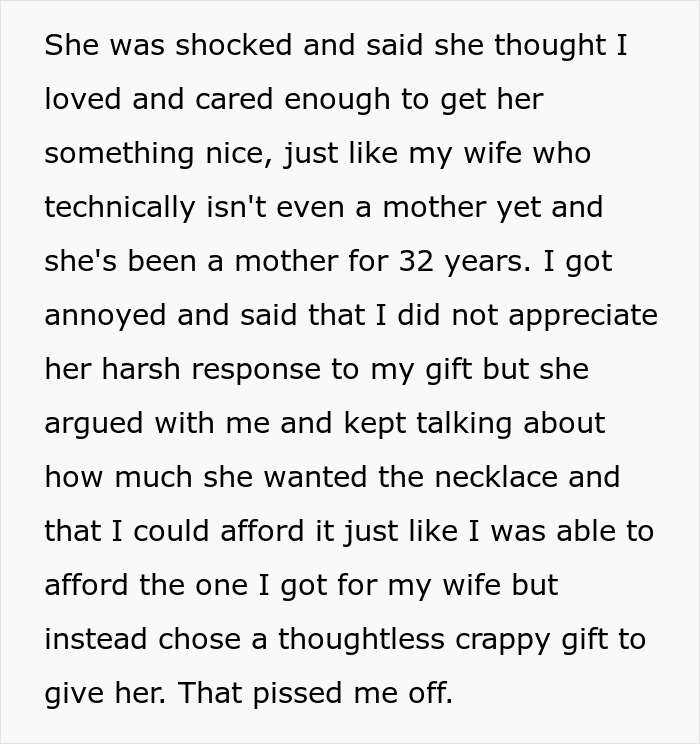 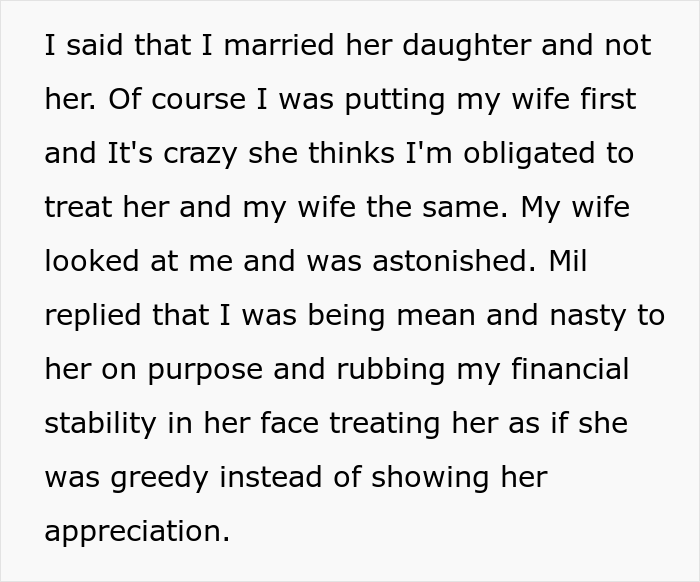 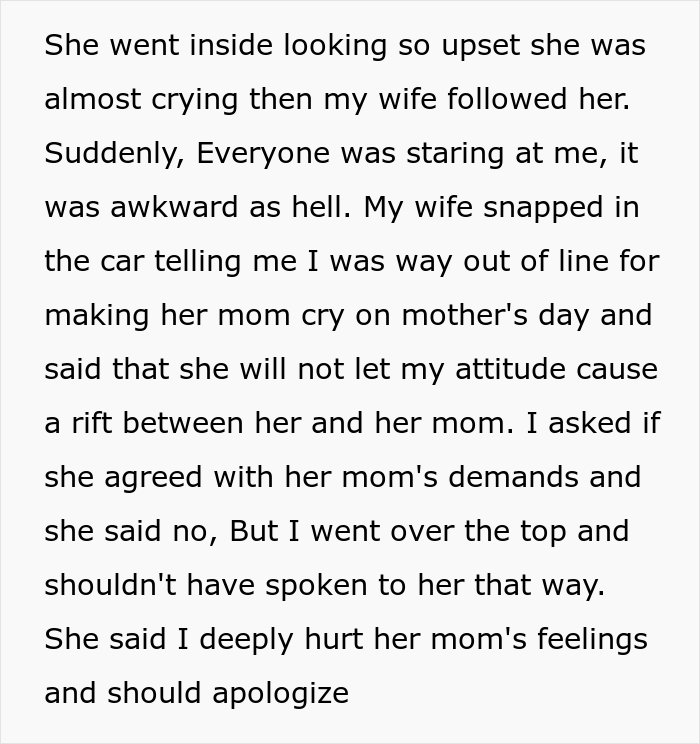 Situations like this aren’t benefiting anyone. But instead of judging the mother-in-law, we might be able to blame Mother Nature instead.

A recent study published in the Evolutionary Psychological Science journal claims that both men and women have more fights with their mothers-in-law (44%) than with their own mothers (39%).

The majority of conflicts between spouses and their mothers-in-law revolve around financial resources and child care.

This shouldn’t come as a surprise, as finances and children are common among the top stress factors in many relationships, according to Marriage.com.

These issues are vital to a successful marriage as they are both “central to long-term reproductive success as resources and the time and effort spent on kin care are finite,” the study noted. 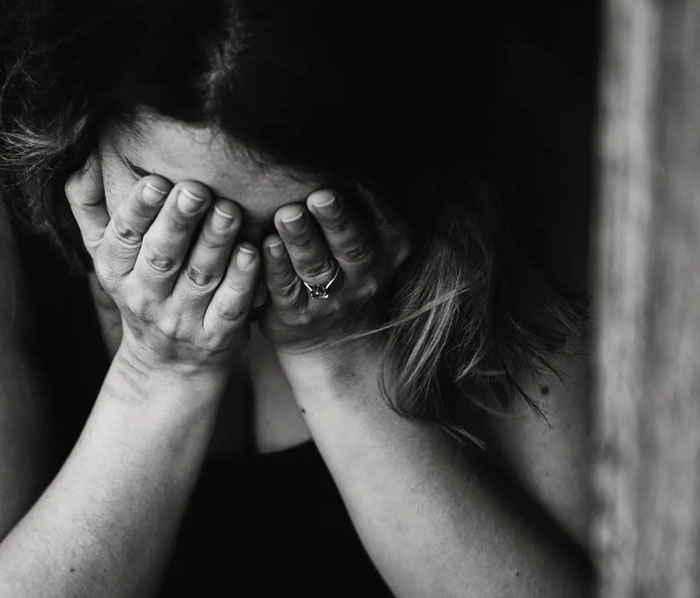 The researchers suggested that these disagreements may be “influenced by genetic conflict” as each person “unconsciously acts in the interest of their genetic kin” instead of in each individual’s best interest.

“This genetic conflict may cause affines (in-laws) to disagree about the distribution of resources and investment, just as we see mothers and fathers disagreeing in these domains,” the authors of the study explained. “Our results are consistent with the hypothesis that genetic conflict may underlie negative social interactions that occur in affinal (in-law) relationships.”

The researchers also noted that animosity between in-laws is likely strengthened by the fact that they “do not choose to have relationships with one another” but are forced into familial bonds as “unintended consequences” of their children’s romantic relationships.

While both men and women reported conflicts with their mothers-in-law, mothers reported slightly less conflict with their daughter’s (17%) than their son’s spouses (18%).

This finding aligns with “prevailing folk knowledge” and much of popular culture which often “suggests that the mother and daughter-in-law relationship may be especially fraught with conflict.”

Dr. Terri Apter, a psychologist from Cambridge University, analyzed the fraught relationships between wives and mothers-in-law in her book, “What Do You Want From Me?“

“The conflict often arises from an assumption that each is criticizing or undermining the other woman,” Apter wrote. “But this mutual unease may have less to do with actual attitudes and far more to do with persistent female stereotypes that few of us manage to shake off complete.”

“Both the mother and the wife are struggling to achieve the same position in the family — primary woman. Each tries to establish or protect their status. Each feels threatened by the other.” 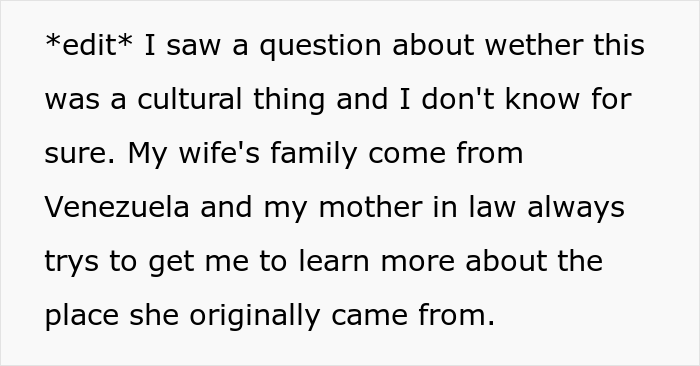 Interestingly, fathers were seen to have the opposite reaction and were found to get on better with their daughters-in-law than with their own daughters.

Researchers said that this may be due to the father’s protective instincts which are heightened when the daughter enters a new romantic relationship but could lessen over time as the father warms up to his son-in-law.

So anyway, Kev’s mother-in-law’s nagging may have actually been genetics. Or she’s a just gold digger. You be the judge.

After his story went  viral, Kev provided more details in the comments 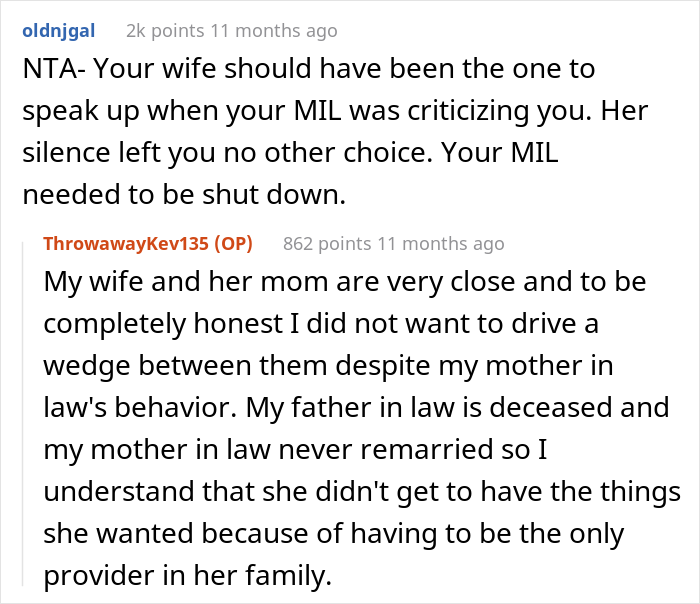 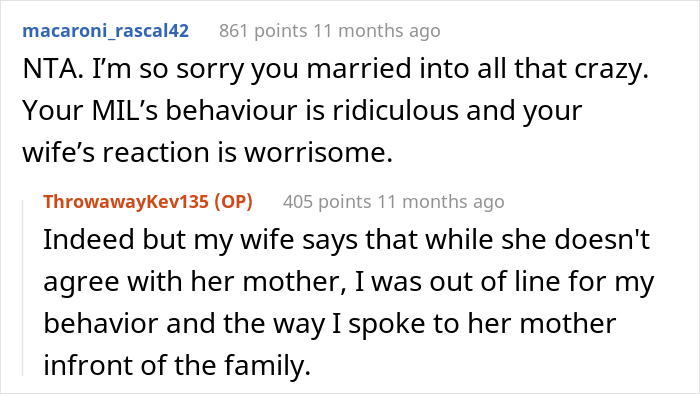 People unanimously said he was NTA — “not the a***ole” 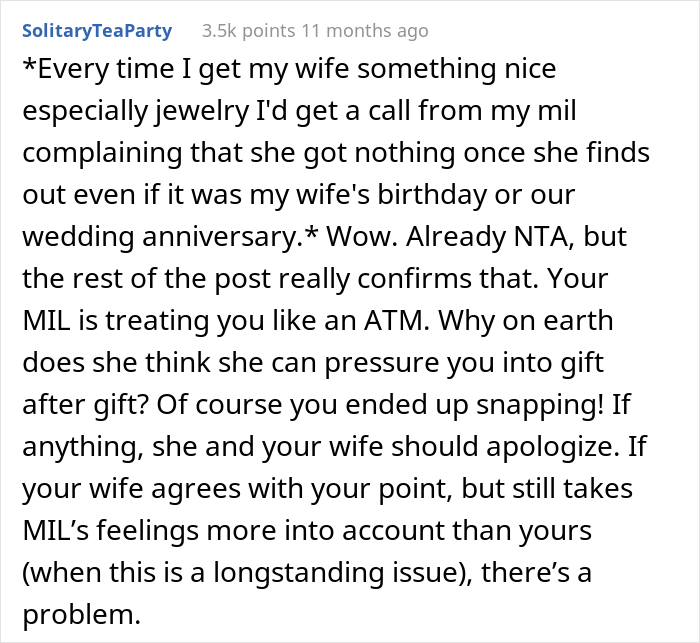 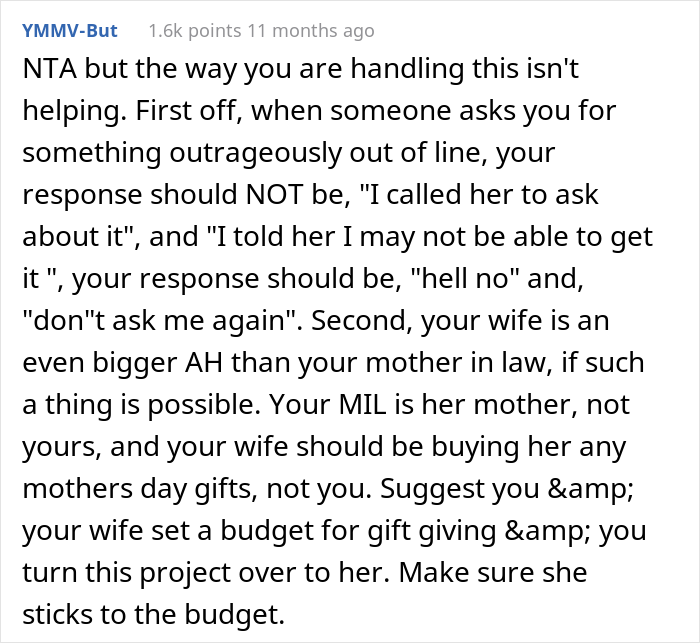 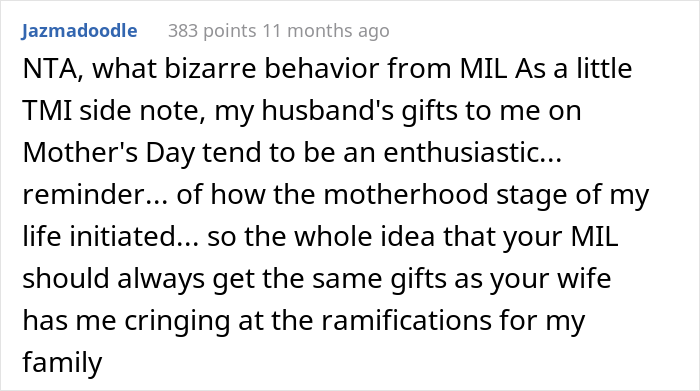 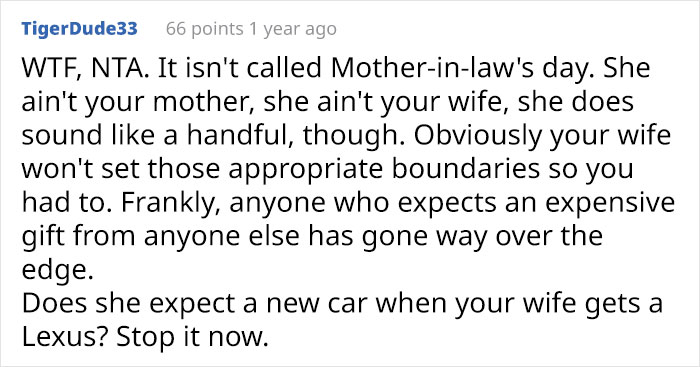 The post Mother-In-Law Expects To Be Treated The Same As Her Daughter, Husband Can’t Take It Anymore, Family Drama Ensues first appeared on Bored Panda.