Proposing goes hand in hand with a vast amount of pressure to get things right. From selecting a magical spot to uttering the right words, you know this is the moment you’ll tell your grandkids about. But before you get down on one knee, you also have to consider the sum you’re willing to spend on a beautiful piece of jewelry your loved one will cherish for years to come. One man came up with a scheme to avoid going into debt for buying an expensive engagement ring but, apparently, didn’t think his whole plan through.

Nine months ago, Redditor aita-ering reached out to the AITA community after a heated argument with her son, Sam. The 26-year-old man finally decided to pop the big question to his longtime girlfriend, Emily. But the thrill of the good news quickly disappeared when he asked his mother to take the ring off her finger to pass it down to his fiancée.

Sam somehow got the idea that he is entitled to his mother’s ring and that this way, he could save a few bucks and not buy a new one. However, the man did not expect his mother would love wearing it so much that she would insist on keeping it. Well, that didn’t sit well with Sam since he continued showing his disapproval of his mother’s actions and started arguing with her. Read on to find out how the whole ordeal unfolded and share your thoughts about it in the comments.

Proposing to someone is a magical moment, but it also comes with the pressure to get everything right 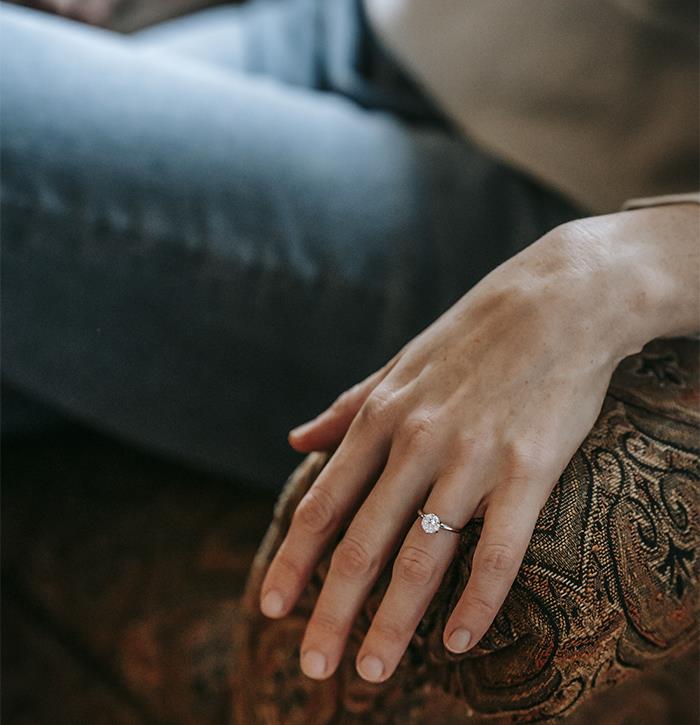 Unfortunately, this man didn’t when he insisted his mom pass down her engagement ring to his fiancée and got angry after she refused 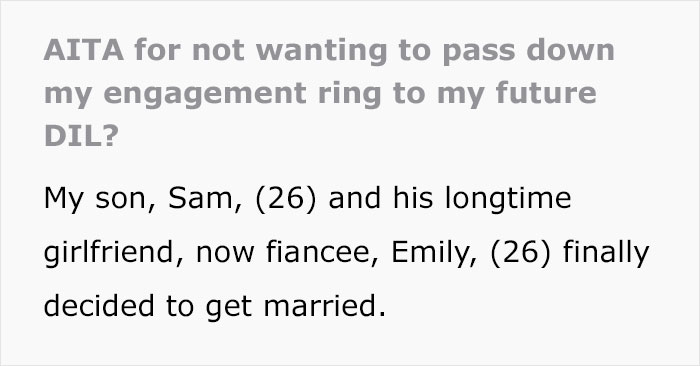 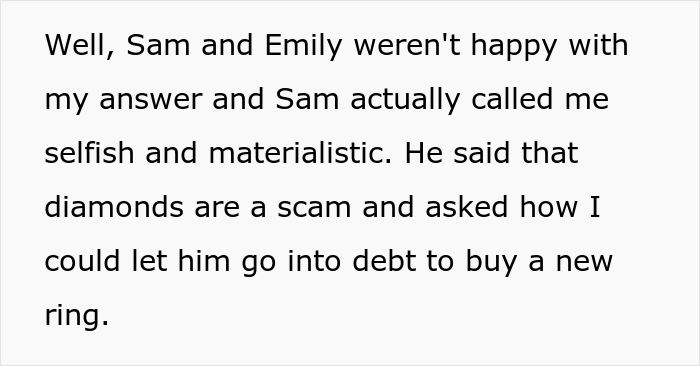 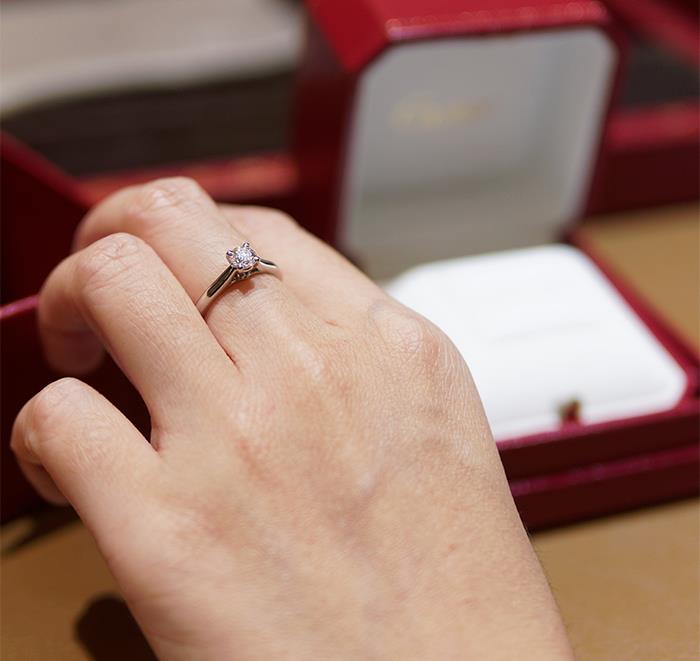 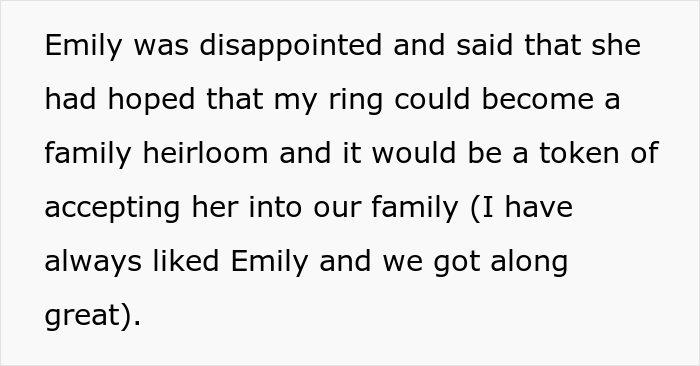 Later on, the user clarified a few details in the comments

Parents may have a duty to support their children no matter what. Yet, there should be no room in a family to throw accusations without a single care in the world. Redditors immediately sided with the mother and determined she was not in the wrong in this situation. With over 3k comments, members of the AITA community expressed their worries about the signs of entitlement her son revealed and offered their own insights about his actions.

To find out what an expert had to say about this incident, we reached out to Judy Bartkowiak, a family therapist, coach, and author of Empower your kids! A coaching guide for parents. She pointed out that this isn’t a child we’re talking about. It is a grown man who asked his longtime girlfriend to venture into marriage and possibly have children with him in due course, the therapist added.

However, she explained Sam is essentially acting like a child. “It’s all about what he wants with not enough maturity or emotional intelligence to understand that this is his mother’s precious and sentimental property, given to her by her husband. It is not a family heirloom, and even if it were, it is not something he is entitled to while she is still alive,” she told Bored Panda.

The man had no right to call his mother selfish or materialistic for wishing to wear her own engagement ring, Bartkowiak argued. “As a grown man embarking on his own marriage, it is his responsibility to provide for his fiancée, and if he can’t afford a ring yet, then perhaps he needs to save up or buy a second-hand one or cheaper ring, then upgrade in the future.”

Conflicts between parents and children are common, and occasional arguments are simply a part of family life. However, it’s important to try our best to prevent them from becoming permanent disputes that bring tension and stress and affect our well-being. Speaking of this particular situation, the therapist noticed that Sam is showing a trend of negative behaviors. “I suspect with such a man as her son, it will sadly spiral,” Bartkowiak noted. “He’s having a strop because he can’t get his own way and by bullying her, he is showing his fiancée how he will treat her when he doesn’t get what he wants. I hope she will see this.”

“I think the mum is being true to her feelings and honoring her husband by insisting she keep her engagement ring,” she said, adding that it’s rather unbelievable that a son would even be asking for the engagement ring while she’s still alive. “I suspect this is a spoilt young man and perhaps it is too late now for him to realize that you don’t get what you want by shouting at a vulnerable older woman.”

Bartkowiak stressed how important it is for parents to say “no” to their children. “As mums, we want to say ‘yes’, don’t we? But unless children hear and respect our ‘no,’ how will they appreciate our ‘yes’?”

“This young man is showing his true colors and I sincerely hope that his fiancée takes note and dumps him for a man who loves and respects his mother,” the therapist added. “[A man] who wouldn’t dream of asking for her engagement ring while she is alive and certainly one who doesn’t shout at her and accuse her of being selfish and materialistic. Get out of this relationship, sweetheart, this is not someone who will treat you with respect and kindness,” Bartkowiak concluded.

Redditors overwhelmingly sided with the woman, here’s what they had to say 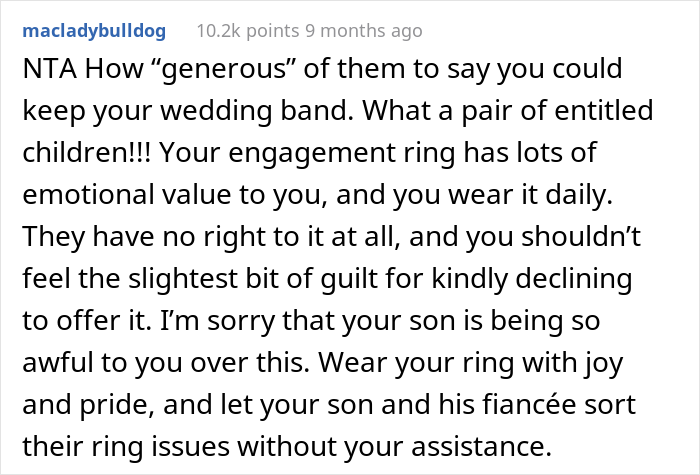 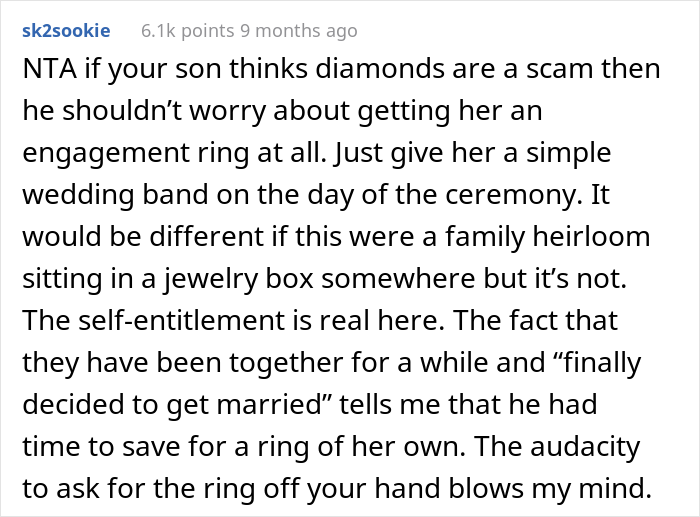 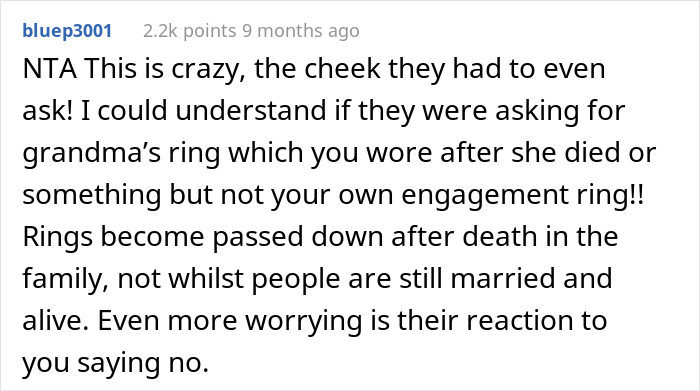 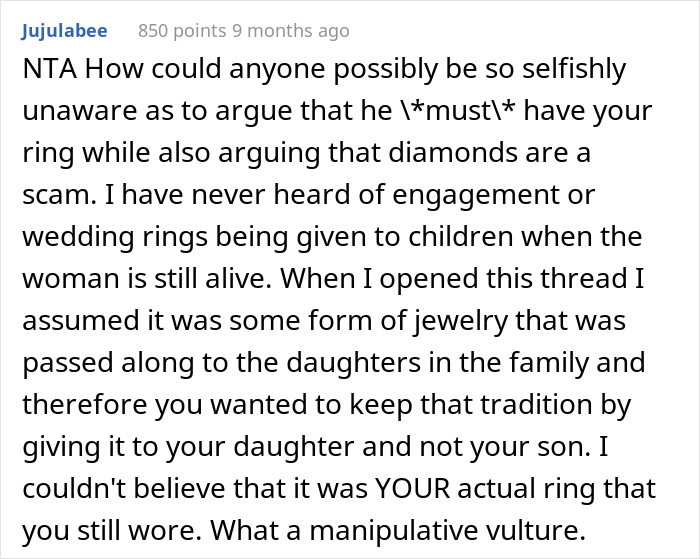 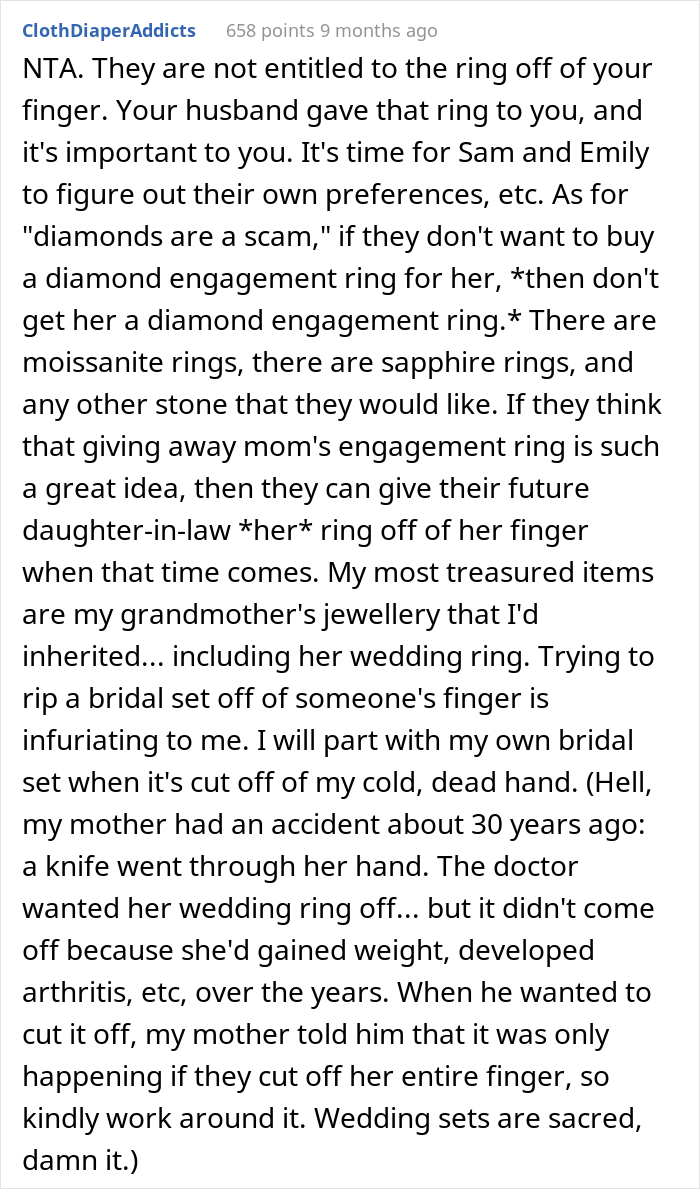 The post Mother Is Called ‘Materialistic’ After Refusing To Pass On Her Engagement Ring As An Heirloom first appeared on Bored Panda.