Not being a runner myself, I can’t fully explain why people choose to run, so I fall upon those who’ve made the sport a daily task. Whether for recreation, for the challenge, or for health purposes, running unites, running inspires, and running brings forth a sense of freedom. Maybe we can’t yet fly, but we can surely run.

For Eric Domingo Roldan, running is a means of bonding with his wheelchair-bound mom, who was diagnosed with multiple sclerosis (MS) when he was just a child. Now the duo hold the Guinness World Record for the “fastest marathon pushing a wheelchair,” and they have no plans to stop reaching for the stars. Let’s get into their story!

Mother and son duo, Silvia and Eric Domingo Roldan, started running marathons together, with Eric pushing her wheelchair all the way to the finish line 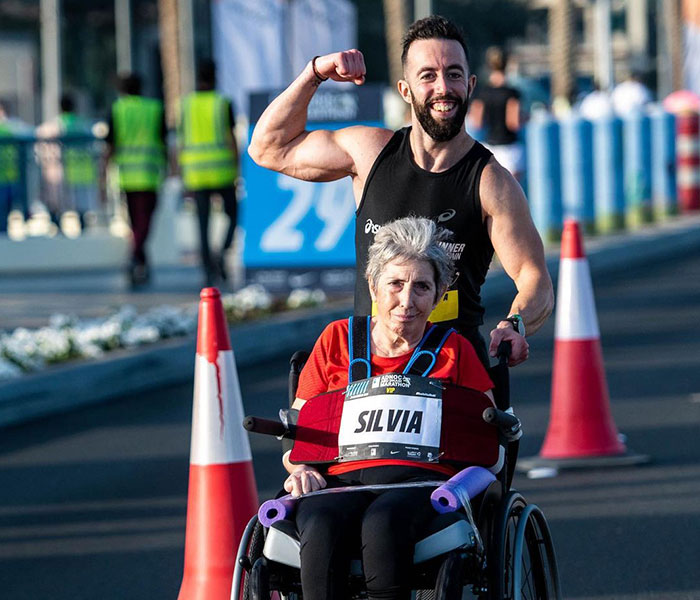 I have said it countless times—runners amaze me! Their dedication to the sport, regardless of the cold, the heat, the rain, the sleet, the wind, the lack of wind, they’re up and running. Nothing seems to be able to stop them. My own relationship with running ends with needing to catch a bus, the sensation of lungs burning and legs cramping being highly unpleasant.

So when people run over 26 miles (around 42 km) in a marathon, it’s a feat worthy of applause. However, when one adds in the challenge of pushing a wheelchair with another human being in it, especially when it’s the person you love the most, it not only inspires—it showcases the best parts of being human.

Silvia was diagnosed with multiple sclerosis (MS), a disease that damages nerve cells in the brain and spinal cord, when Eric was just 7 years old 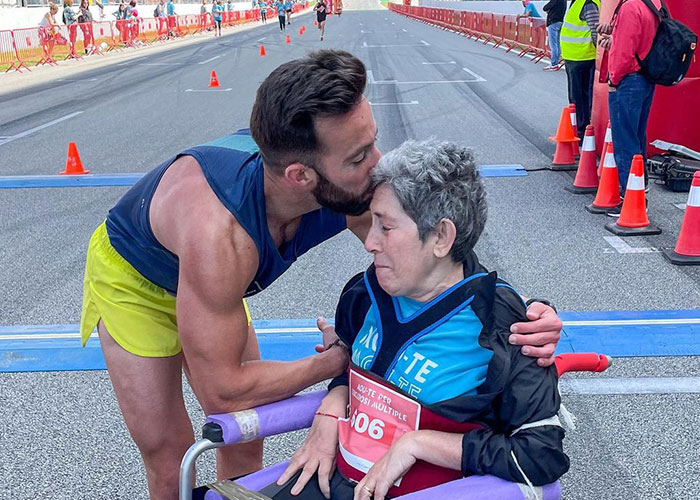 Spanish athlete Eric Domingo Roldan pushed his mom Silvia, who has multiple sclerosis (MS), in a wheelchair for 26 miles to raise awareness for the disease and raise funds for an MS charity. By doing so, they beat the Guinness World Record for the “fastest marathon pushing a wheelchair,” which stood at 2:58:40.

Silvia was diagnosed with MS when Eric was just seven years old. According to the Mayo Clinic, MS is a potentially disabling disease where the immune system attacks the protective sheath (myelin) that covers nerve fibers, causing communication issues between the brain and the body.

The deterioration of the nerves can lead to many different outcomes, depending on which nerves are affected. There’s no cure for multiple sclerosis; however, treatments can help speed recovery from attacks, modify the course of the disease, and manage symptoms.

In 2016 he became an advocate for MS, aiming to raise awareness of the condition, as well as raising funds for research into treatment and a potential cure 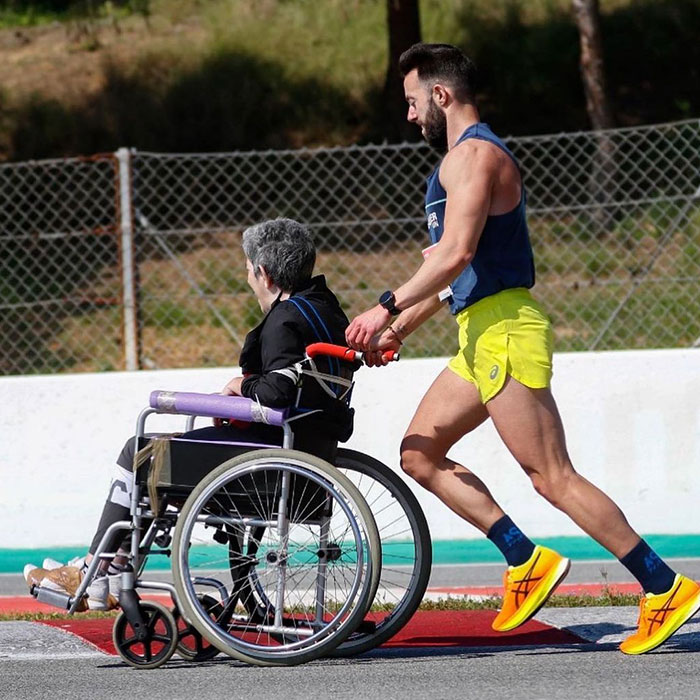 Since 2016, Eric has become an advocate for the condition with the goal of raising awareness. In one Instagram post, he gave credit to sport for keeping his mental health in check. “Thanks to sport, it has been possible to transform a negative situation that affected the mind a lot, into something that now is motivation and will to live,” he wrote, continuing to say, “Sport saved me!”

But it seems it saved his mom as well, with running providing her with a sense of freedom and quality time to spend with her boy. “It fills me with life, and gives me peace being able to see the landscapes. And above all, it gives me an incredible freedom,” she said in a video.

Running has not only bonded the pair, but it has also improved Eric’s mental health and given Silvia a sense of “incredible freedom” 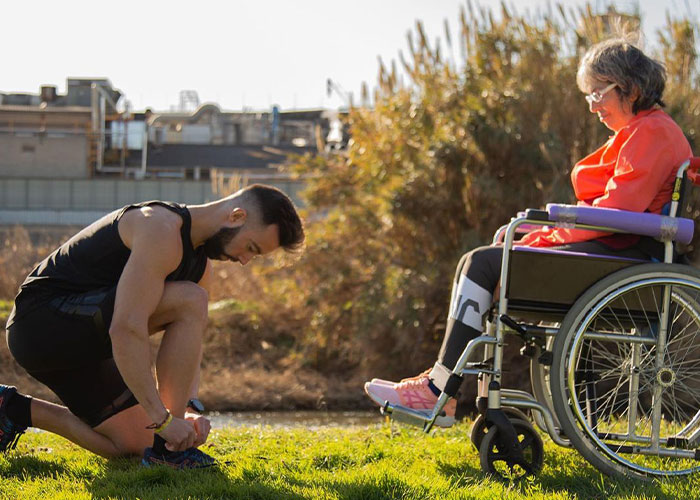 They had one goal in mind—to set the Guinness World Record. “I thought it would be a good challenge for both me and my mum, because she’s been facing challenges since she was a child, and I thought she would love it,” Eric told Runner’s World.

The first time they tried was back in 2020 in Seville. They completed the marathon in 3:00:30, a painfully close 1 minute 21 seconds off the record. But instead of giving up, they trained harder, more excited than ever to reach the goal they’d set out to achieve. 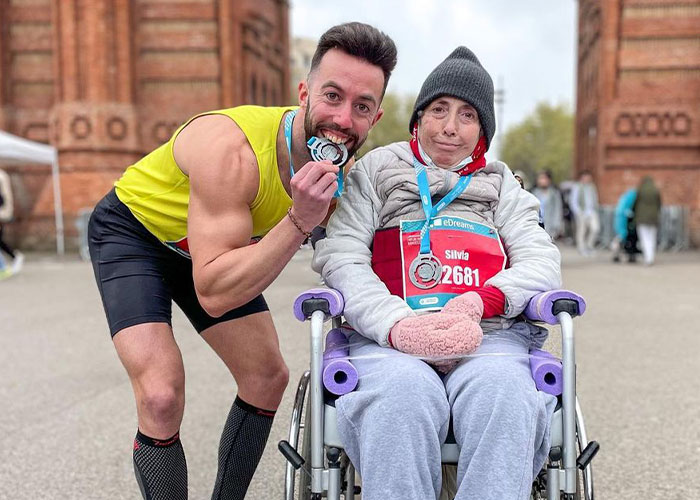 On November 7, 2021, the conditions were perfect for racing in Eric’s hometown, Zurich Marato in Barcelona, Spain. Over 15,000 runners from 120 participating countries all showed up to compete.

Although nervous, as most runners are before such a feat, he was determined to do his best. A strong start meant that Eric hit the halfway mark in 1:26, well on track for the record if he kept up the pace, and his mom made sure to cheer him on throughout. 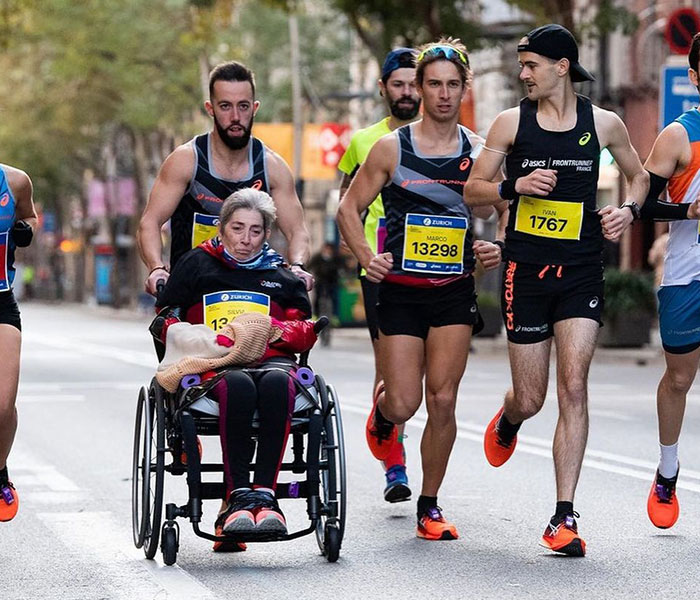 “I was feeling happy from the first kilometer until the last, as my mum never stops cheering and supporting other runners, and that’s the best part of running together,” he said. “Of course, there were points where I felt emotional, when I remembered difficult times like when mum had Covid in August. But the crowd showed us so much love and support.”

“Mum was the happiest person in the world, smiling, laughing and cheering,” he continued. “Amazingly, she was surprised when we arrived at 38 km (23 miles) because she thought we were at 28 km (17 miles). It all happened so fast.” 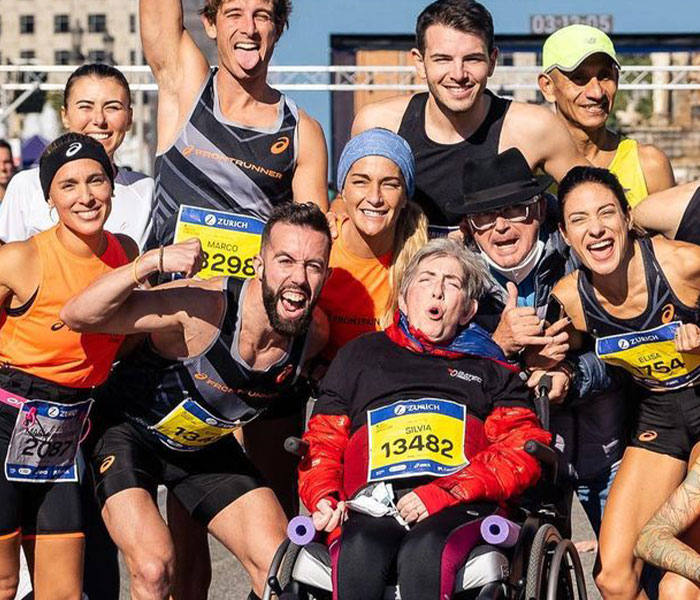 “To cross that line meant that we did what we promised after going through the hardest time of our lives,” Eric wrote in an Instagram post following the marathon 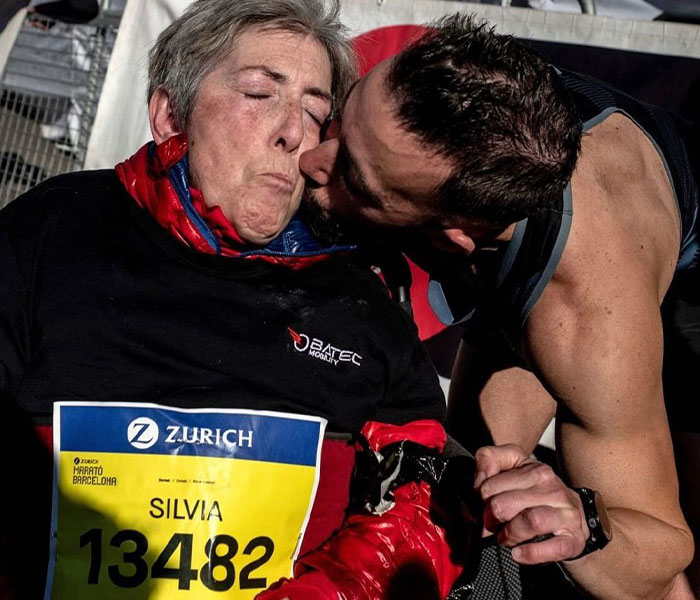 Before they knew it, they crossed the finish line, completing the race in 2:53:28 and setting a new world record. “It was a dream come true,” said Eric. “I was constantly looking at my watch to check if we were on time, and the last 195m were the best seconds of my life.”

“When we crossed the line I just wanted to hug mum and tell her that we did it, for her and for multiple sclerosis. To cross that line meant that we did what we promised after going through the hardest time of our lives.”

Since then, the pair have continued to race, raising awareness of MS and the importance of mental health and becoming a beacon of love and positivity 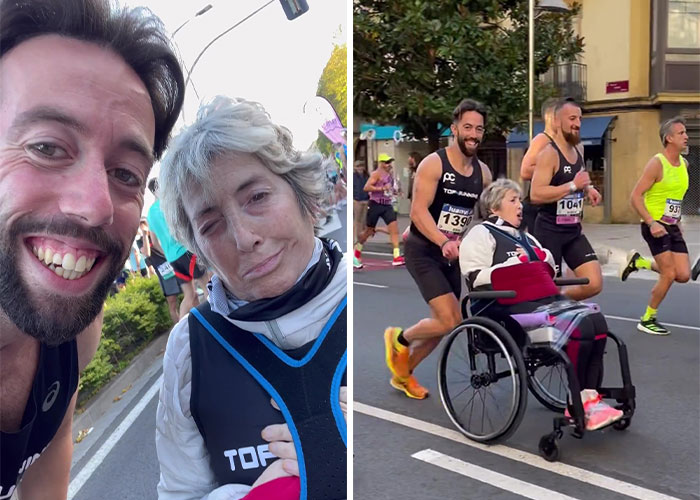 Eric thanked their family and friends for their support, stating in an Instagram post that they never felt alone: “Today, I only can say thank you. I made a promise and now it’s done. This is for my mom. This is for multiple sclerosis. And this is for YOU, YES, YOU (every single human who has supported us) Thank you!”

Since then, the pair organized a campaign called #42kmcorriEMdo, which aimed to raise over $3,000. All of the proceeds went to the Multiple Sclerosis Foundation for advanced research on the disease. They also took part in Carrera de la Mujer (the largest European women’s run), runs for mental health awareness, and others, the most recent being a half-marathon of 20 km in Behobia, San Sebastián. 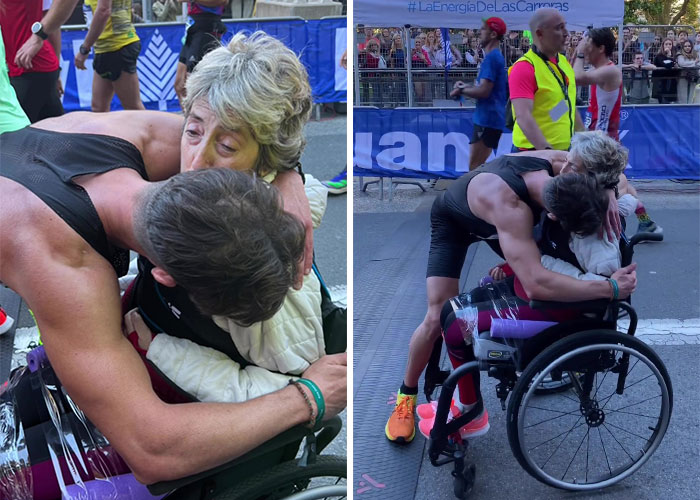 We wish Silvia and Eric nothing but the best for the future and hope to see them break their own record! 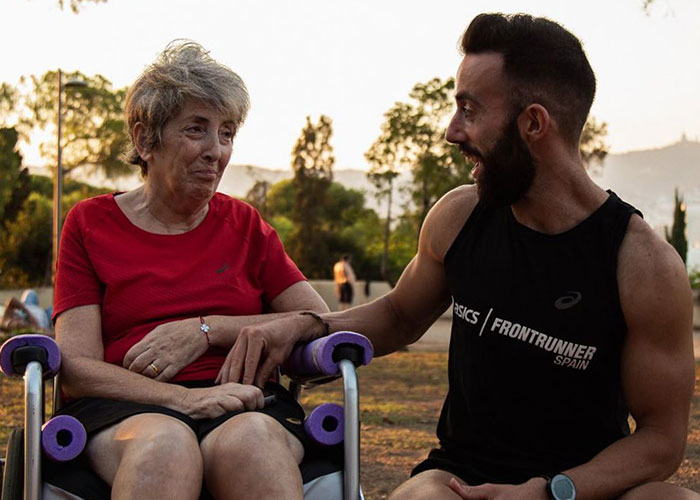 Eric has been documenting their runs on his Instagram page, noting the highs and lows of each one. “Today I felt a bit emotional. I don’t know why, maybe because of tomorrow’s date (7th of November) or maybe because every time I run with mom I don’t know when will be the next or the last,” he wrote. “So now more than ever, let’s make every day count!”

We wish Eric and Silvia nothing but the best and can’t wait to see what awaits them going forward. Maybe they’ll even beat their own record, who knows! Let us know your thoughts on this dynamic duo in the comments below, and I shall see you in the next one!

People online adore this mother-son duo! Let us know your thoughts on this inspiring story in the comments below!

The post Mother-Son Duo Hold The Guinness World Record For “Fastest Marathon Pushing A Wheelchair,” And The Internet Can’t Get Enough first appeared on Bored Panda.