New Orleans–based filmmaker Garrett Bradley has been screening her work at film festivals for several years but has recently found an audience in the art world, appearing in group shows at the Whitney Museum of American Art and the New Orleans Museum of Art. “American Rhapsody,” at the Contemporary Arts Museum Houston, was Bradley’s first solo exhibition, presenting three of her films: America (2019), AKA (2019), and Alone (2017).

America had previously screened at Sundance and other venues as a single-channel cut. But in the exhibition it was an engaging four-channel installation, projected on sheer white flags suspended from the ceiling in an X formation. America begins with still images and clips Bradley took from Lime Kiln Club Field Day (1913), the oldest known surviving film with an all-black cast, starring Bahamian-American recording artist Bert Williams. The clips depict Williams’s character enjoying a day at a fair with the female lead, played by Odessa Warren Grey; their carousel ride plays on each screen. The installation’s design cleverly expands the space of the film. Thanks to the screens’ transparency, traces of the projections can even be seen on the gallery’s walls. The effect vivifies these images of black leisure and joy as they fill the room.

Throughout America, Bradley intersperses shots from Lime Kiln Club Field Day with her own black-and-white footage. She shows nonactors engaged in everyday activities—welders at work, orchestra musicians performing, current-day Buffalo Soldiers caring for their horses—and commemorates significant events in black history that occurred in the early twentieth century, such as Bessie Coleman’s becoming, in 1921, the first African American to receive an international pilot’s license. The vignette dedicated to Coleman is short and dreamlike. An image of a young woman in aviator gear appears alongside a shot of swiftly moving clouds. Suddenly, she’s moving through the clouds as if flying. For the most part, America avoids full-on reenactment, so the historical scenes’ references might be lost on viewers. But while Bradley’s scenes have a lyrical quality, they’re an attempt to make up for the loss of unpreserved silent films made in the 1910s and ’20s, which, in an interview with Film Comment, Bradley says might have been “the heyday of Black cinema.” America does not attempt to revise history, instead signaling the impossibility of restoring lost cultural memory that has been supplanted by negative fictions. 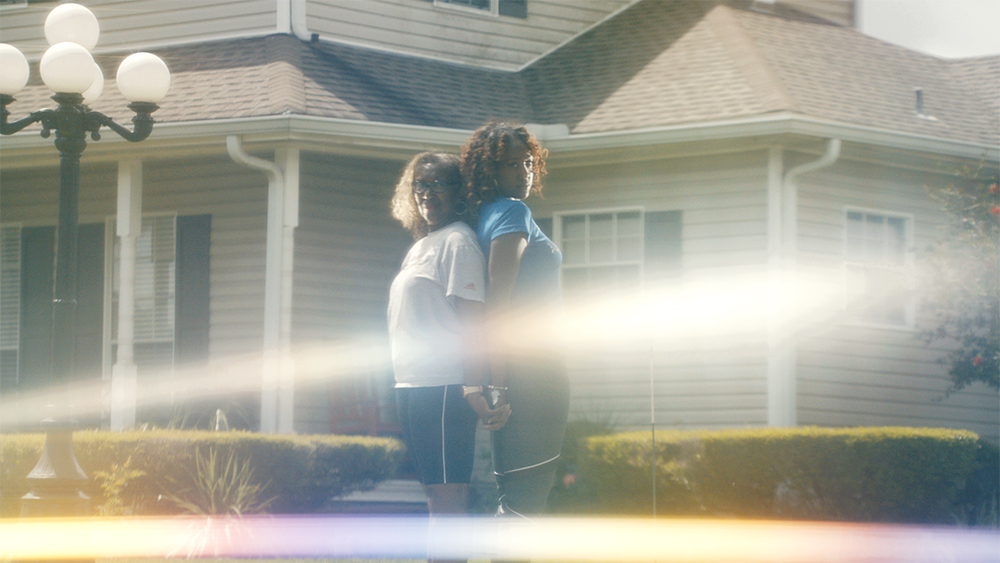 The two other films in “American Rhapsody” likewise blended experimental and documentary modes of filmmaking; they were shown in rooms open to the main gallery, and thus America’s audio bled into theirs. Shot in gorgeous color, the 8-minute AKA features pairs of mothers and daughters from mixed-race families. It has a hazy, fantastical quality and stands somewhat apart from the conversation about race and disenfranchisement that forms between America and Alone. The latter is a nonfiction short, shot in black-and-white, in which Bradley follows her friend Aloné Watts as she contends with a difficult decision. Aloné’s boyfriend, Desmond, is incarcerated and has just proposed marriage to her. Bradley takes considerable artistic license in shaping the narrative, but avoids overexposing her subject, instead positioning Aloné as one protagonist in a struggle that is common in the United States. A woman named Fox Rich tells Aloné that the carceral system “is designed like slavery to tear you apart,” which resonates with America’s message that the theft of black life and happiness is linked to the absence of black representation in the history of cinema.

In Lime Kiln Club Field Day, Bert Williams wears blackface, a convention of minstrelsy that even some black performers followed. The otherwise progressive film exists within a tradition of blackness being performed as a spectacle for a white audience. “American Rhapsody” summoned this past and its connection to today’s media landscape, where stories from black history are produced for a white gaze and black cultural production is appropriated for white profit. Bradley’s films vitally overturn such representational inequities, imagining a lyrical narration of history that tells the real experiences of the people she knows and works with.