Can a cocktail offer a deeper understanding of a work of art? According to some museum officials, yes. With many still closed and others beginning to announce reopening dates, museums around the country have been hosting digital happy hours as a way to connect with their homebound audiences. Some have gone further, inventing new cocktails inspired by works in their collections and searching through bartending books for drinks that complement the art under discussion. Here are three stops in a museum bar-hopping tour. 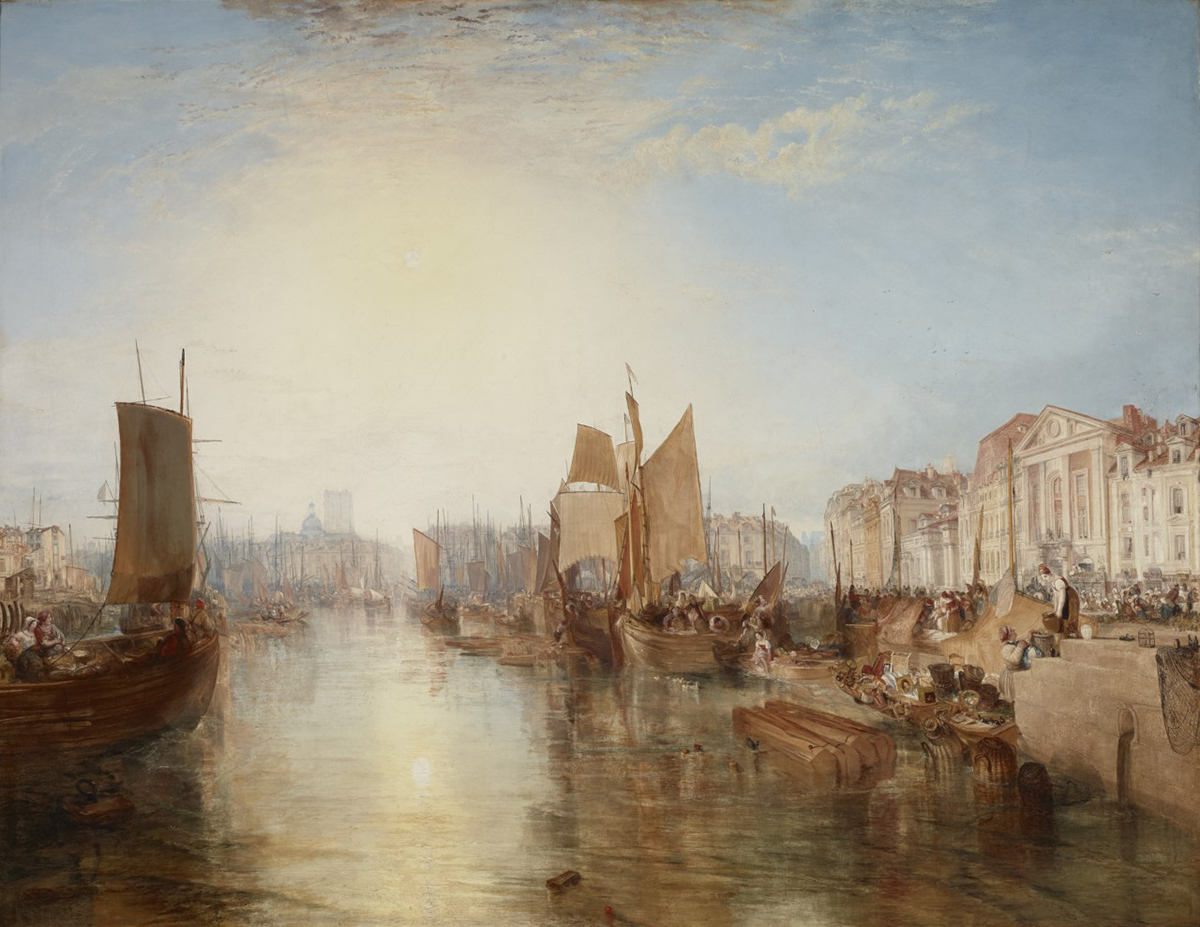 1. Combine the ingredients with ice and stir.
2. Strain into a chilled champagne coupe.

Arguably, the museum that takes its art-historical bartending most seriously is the Frick Collection in New York. Its Friday evening YouTube program, “Cocktails with a Curator,” is a roughly 15-minute look at a single work in the museum’s collection, matched with a thematically relevant, often little-known libation (plus a non-alcoholic variation).

The cocktail paired with Rembrandt’s The Polish Rider, for instance, includes buffalo-grass-infused Polish vodka. For J. M. W. Turner’s Harbor of Dieppe, it’s a lethal concoction known as a Widow’s Kiss (reproduced above), purportedly administered to the women of Dieppe, France, whose husbands had been lost at sea. 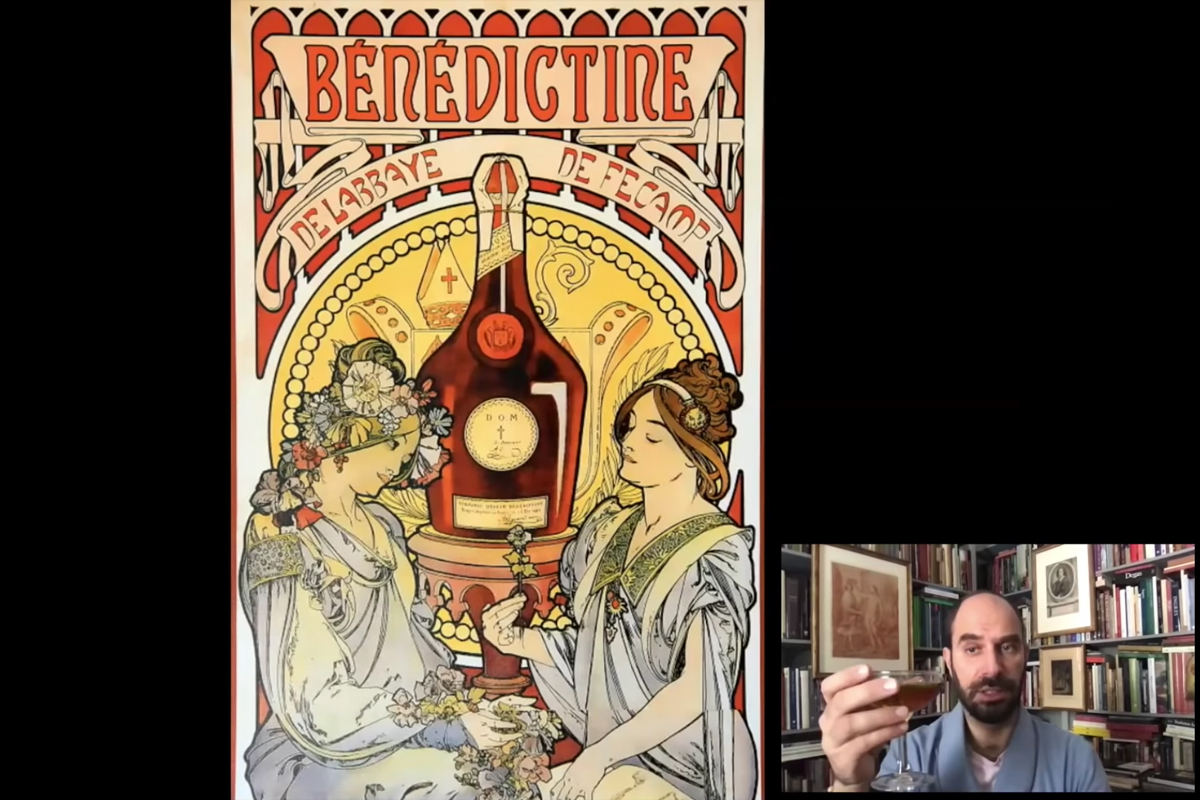 Xavier F. Salomon during “Cocktails with a Curator: Turner’s Harbor of Dieppe.”

“The idea is to talk about the work in an interesting, engaging way, and to show how these works are relevant to issues we’re facing today,” said Xavier F. Salomon, chief curator at the Frick, who has presented most of the segments to date. He added that cocktails “came as a very New York thing—the idea that people after work on a Friday evening go out for a drink.”

Salomon selects the drinks for his segments, at times consulting bartending books and a far-flung network of colleagues. His friends in Dieppe, for instance, told him about the obscure Widow’s Kiss, with its unfamiliar ingredients. “It’s surprisingly good,” he said.

The response to “Cocktails with a Curator” has been overwhelmingly positive, with viewership approaching 100,000 in the first month alone. The audience has been broadly international, drawing viewers from as far afield as South Africa, Australia, Finland, Israel, and Ecuador.

Salomon said that his team plans to continue the virtual “Cocktails with a Curator” for the foreseeable future. The experience, he added, is changing the museum’s approach to reaching a wider audience. “The online presence is something that we’ve now learned how to use, how to engage with,” he said, “and I think it’s something that’s there to stay.” 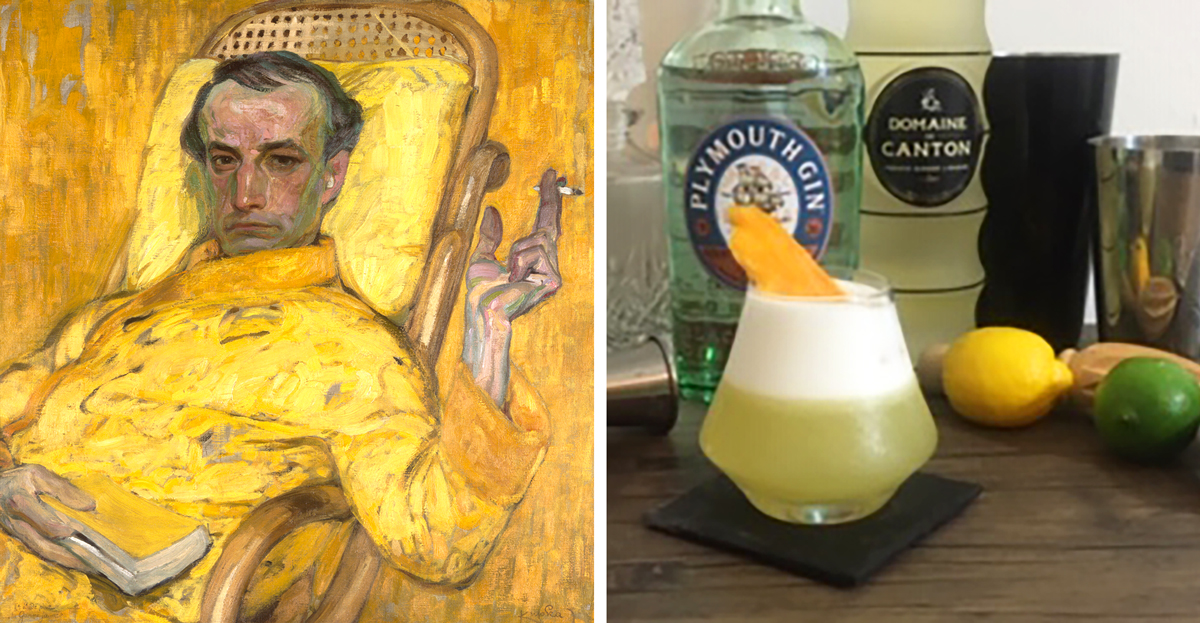 1. Add juices, sugar, liquor, and egg white to mix (in that order).
2. “Dry” shake (no ice) for one minute. Shake vigorously in an up-and-down motion so that the liquid goes from the top to the bottom of the shaker.
3. Add ice and shake until very cold, ensuring that the ice and liquid go to the top and bottom of the shaker.
4. Pour contents into a glass, using a Hawthorne strainer to avoid getting ice in the glass.
5. Garnish with dried mango.

*The egg white makes a thick, frothy foam on top. Don’t worry, alcohol kills the bacteria, but if you do have an egg allergy, you can omit.

Though the Museum of Fine Arts, Houston, reopened with modifications at the end of May, its café remains closed and drinks aren’t an option. But online, the museum has invited virtual visitors to whip up a cocktail by the name of Fugue in Yellow, a gin-based drink inspired by a one of the most popular works in the museum’s collection: The Yellow Scale (ca. 1907), a self-portrait by Czech artist František Kupka. Done almost entirely in shades of yellow, the painting sets up a compelling tension between its cheerful hues of Kupka’s shirt and chair and the enervated, baleful figure who stares directly at the viewer.

“That painting really spoke to me,” said Harold Madison, the MFAH’s events-beverage manager who invented the drink. “It looked like he needed a cocktail.”

“The color yellow was screaming ‘tropical’ to me,” Madison said, “so I was thinking along the lines of tropical fruits—what would be good on a bright sunny day?”

The obvious choice was rum, he said, but he decided against it “because Kupka was probably a complex guy,” who pushed the boundaries of abstract art with works like Disks of Newton and Amorpha: Fugue in Two Colors (both 1912). So Madison chose gin, with its complex botanicals, adding ginger, lemon, lime, and mango. “I opted for the egg white because I wanted to give it a richer mouth feel, and I wanted to get that nice foam head at the top,” he said. “And it turned out as I expected.”

Madison has often created art-inspired drinks for MFAH events, but Fugue in Yellow was the first to go digital. Created for a virtual happy hour on the museum’s Facebook page, the cocktail and its artwork were a hit on the museum’s blog and social media networks, racking up 2,300-plus likes on Instagram alone.

Despite the appealing mix of flavors, not every virtual drinker was won over. “Only issue I have with this cocktail recipe,” one reader commented, “is who has ginger liqueur stocked in their liquor cabinet and mango nectar on hand?”

Madison also recently whipped up another cocktail for the MFAH’s online bar crowd to try: El Vivificador (The Reviver), a rum-and-whiskey combo that most likely lives up to its name. Inspired by “Armchair Travel: Exhibition on Screen,” the MFAH’s virtual film series, which this year features Michelangelo and Lucian Freud documentaries, Madison’s latest creation published earlier this month on the MFAH blog. 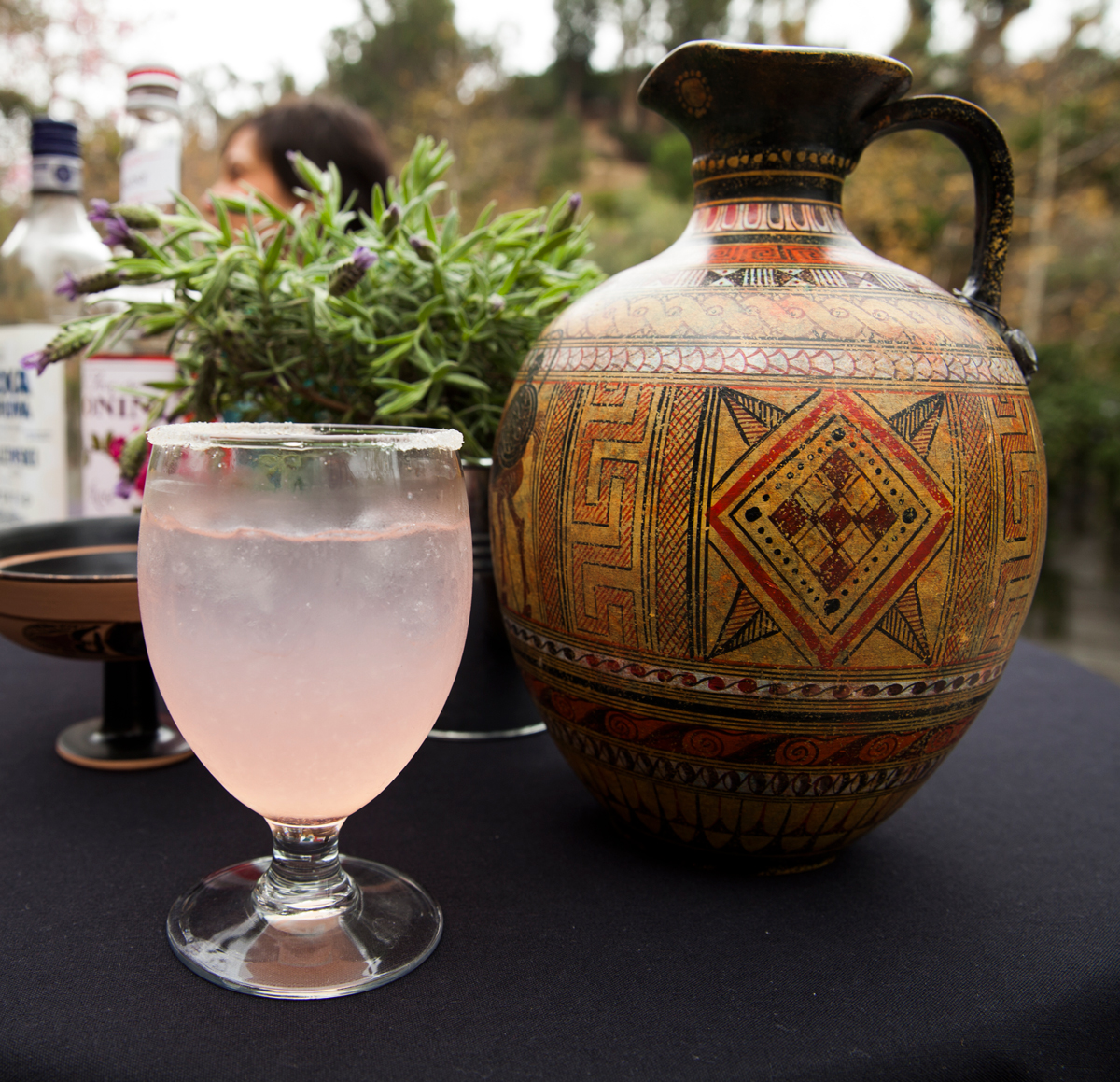 The Touch of Venus cocktail.

1. Make lavender crystals for the rim of the glass: place dried lavender and sugar in a food processor and process until fully combined, about 1 minute.
2. Make the simple syrup by simmering equal parts of sugar and water until the sugar is dissolved. Let cool.
3. Begin by garnishing a 12-oz. glass: place fresh lemon juice on one a small plate and spread the lavender crystals evenly on a second small plate. Dip the rim of the glass into the lemon juice and then into the lavender crystals to lightly coat.
4. Pour rose syrup, lemon juice, vodka, and simple syrup into prepared glass.
5. Add ice and enough soda water to fill each glass.
6. Stir and serve.

Through its blog The Iris, the Getty Center has recently made available three recipes for “antiquity-inspired elixirs” tied to works at the Getty Villa, its Malibu branch devoted to the ancient world. Among them is Touch of Venus cocktail, originally made during a 2013 culinary workshop at the Villa that explored ancient aphrodisiacs and myths related to love, sex, and beauty.

The Roman goddess Venus and her Greek counterpart Aphrodite are well represented in the Villa’s collection, in sculptures like the bronze Aphrodite Spanking Eros (200–1 B.C.E.) and a terracotta Statuette of a Nude Venus (1st–2nd century C.E.) 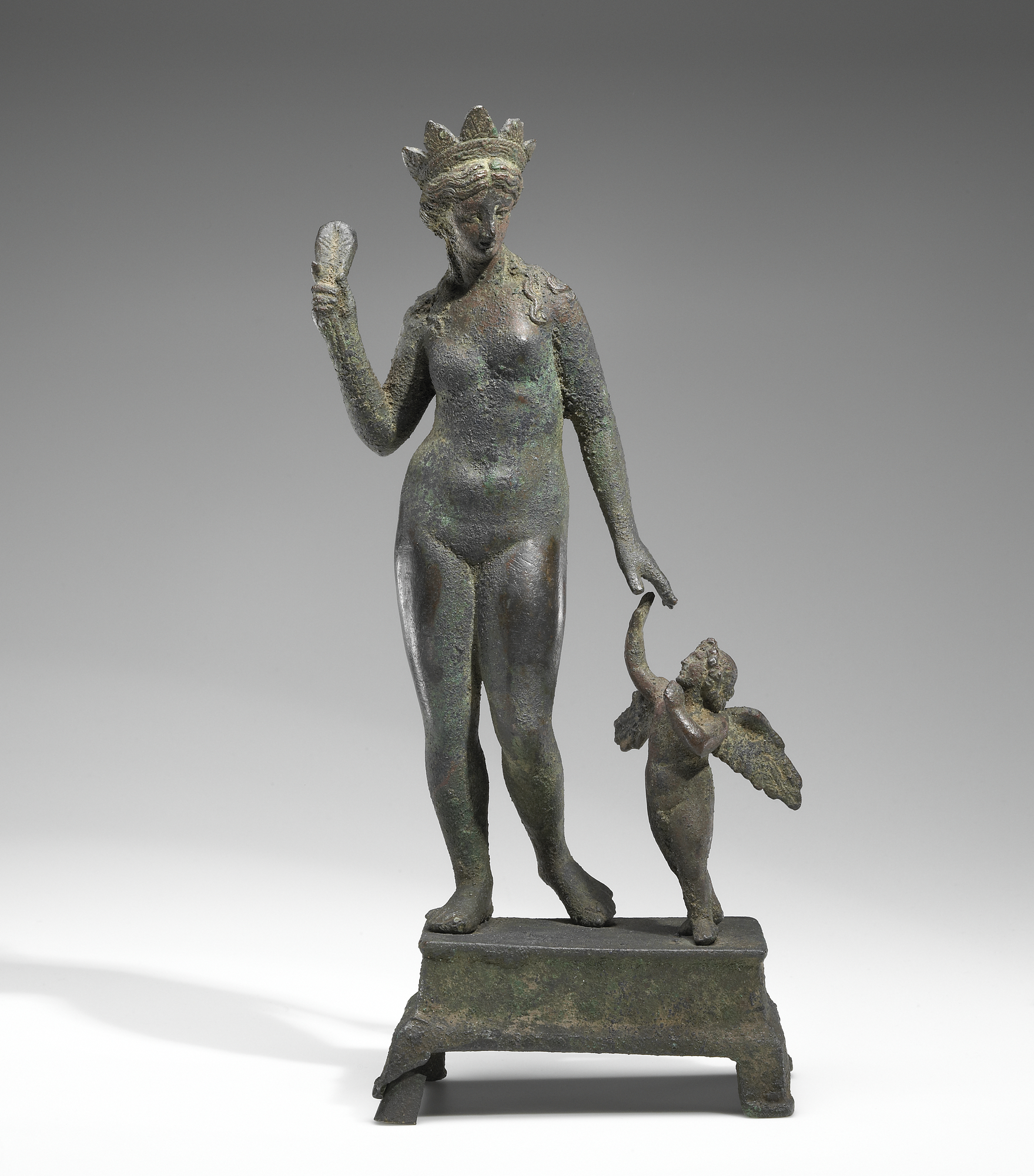 Libations are also a pervasive theme in the Villa’s holdings, from Greek wine cups embellished with scenes of more wine-drinking to a Roman fresco panel of the wine god Bacchus and his consort Ariadne.

Desiree Zenowich, a Getty spokesperson, said that the idea to publish the historic cocktail recipes came naturally, “since everyone’s at home experimenting with baking and cooking, and most likely drinking” on Zoom and other virtual platforms.

As the shutdown kicked in, the blog’s audience has quickly expanded. Worldwide enthusiasm for the Getty Challenge—re-creating a work of art from the collection using everyday objects—sent traffic soaring, with total views up almost 500 percent over the same period last year.

“We were already working to go more digital before the shutdown, and obviously that has kicked into high gear,” said Zenowich. “We plan to continue that even when we reopen.”