We all want to help out our family members when we can. Driving them to doctor’s appointments, helping them pack and relocate their things when moving and watching their kids every now and then are just a few things we can do to make our loved ones’ lives easier. But you’re only going to be willing to help out your relatives if they also help you in return on occasion. Favors shouldn’t always be one-sided, or eventually, those ‘generous’ family members are going to decide that they’ve had enough.

One man, who is tired of bending over backwards for his brother and sister-in-law, recently posted on the True Off My Chest subreddit detailing why he finally decided to put his foot down. After being expected to babysit his nephews at the drop of a hat too many times, this father decided to enforce boundaries and ultimately cut off his brother.

Below, you can read the full saga that led this father to this decision, as well as some of the replies from readers, and an interview between him and Bored Panda. Let us know in the comments how you feel about all of this family drama, and then, if you’re interested in checking out another article featuring a parent who felt entitled to free childcare from his family members, you can find that right here!

After being used as a free babysitter by his brother and sister-in-law too many times, this dad finally decided to stand his ground 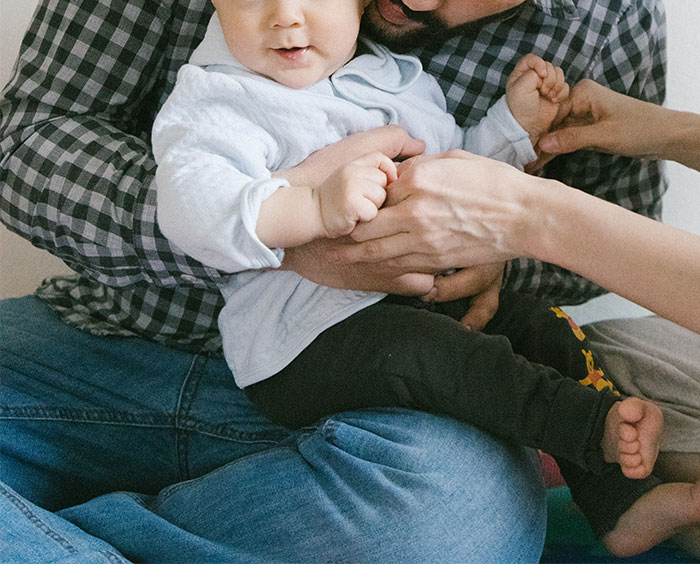 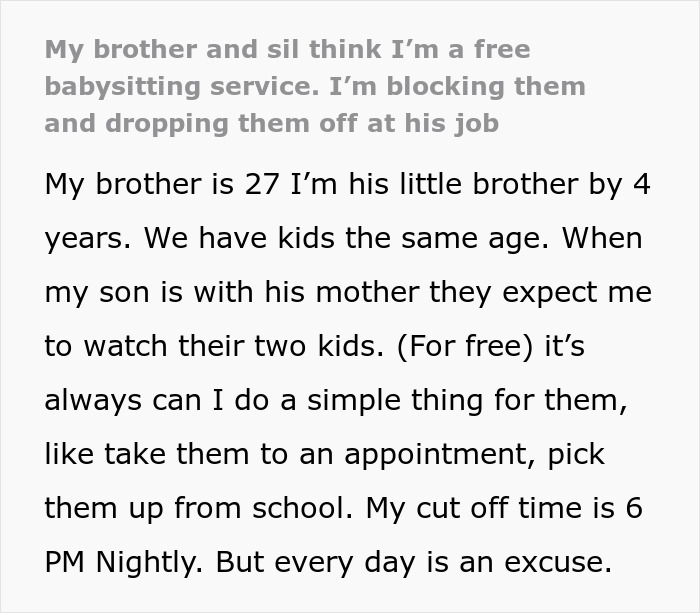 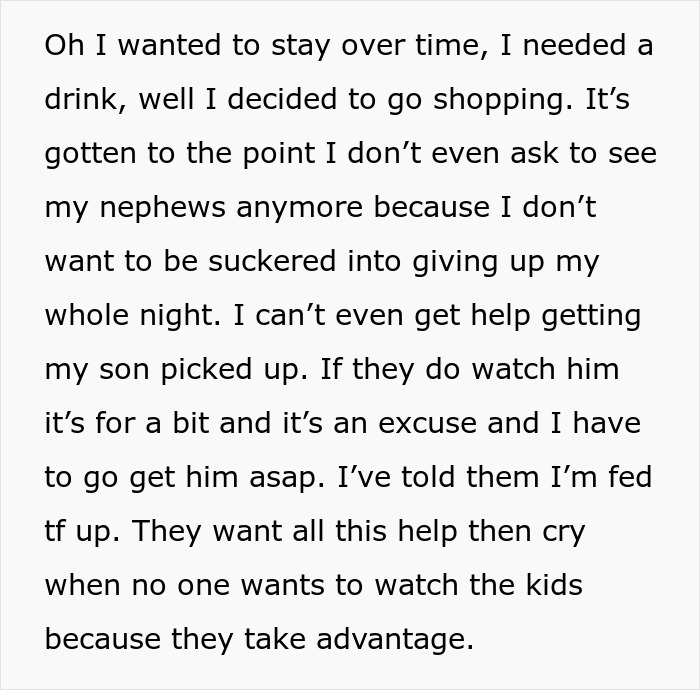 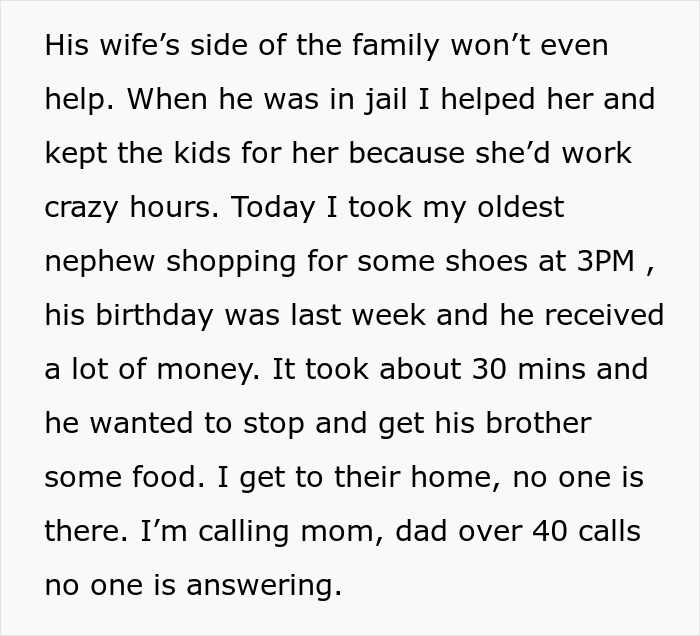 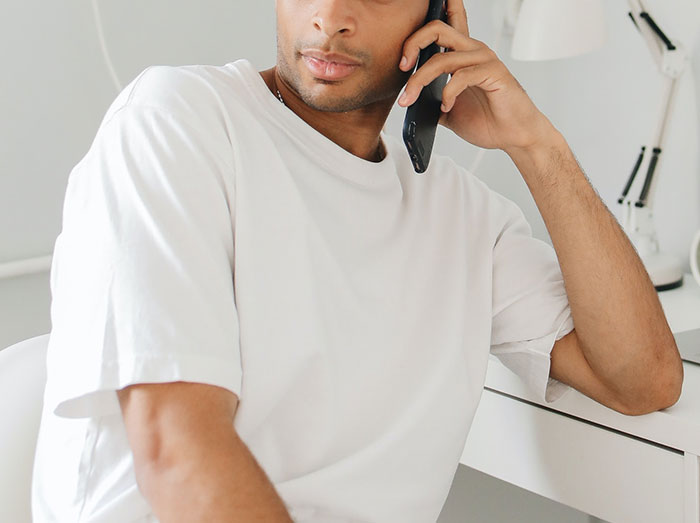 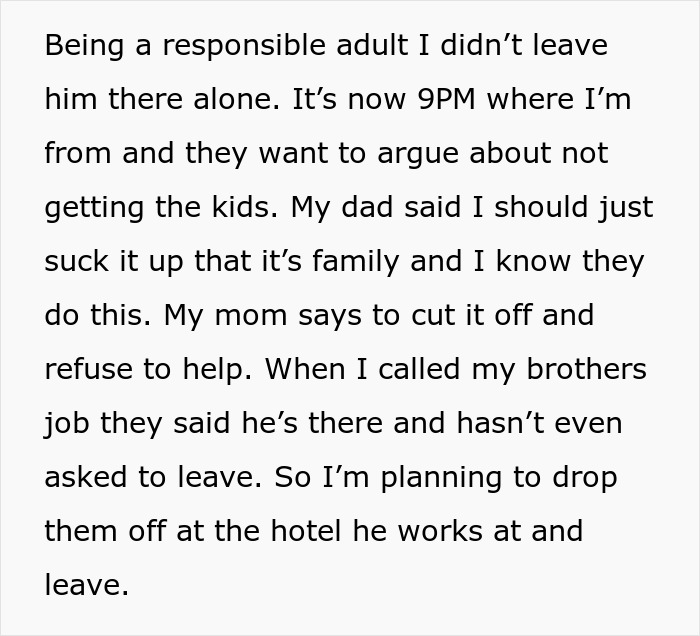 After his post started blowing up, the father shared an update with additional details on the situation 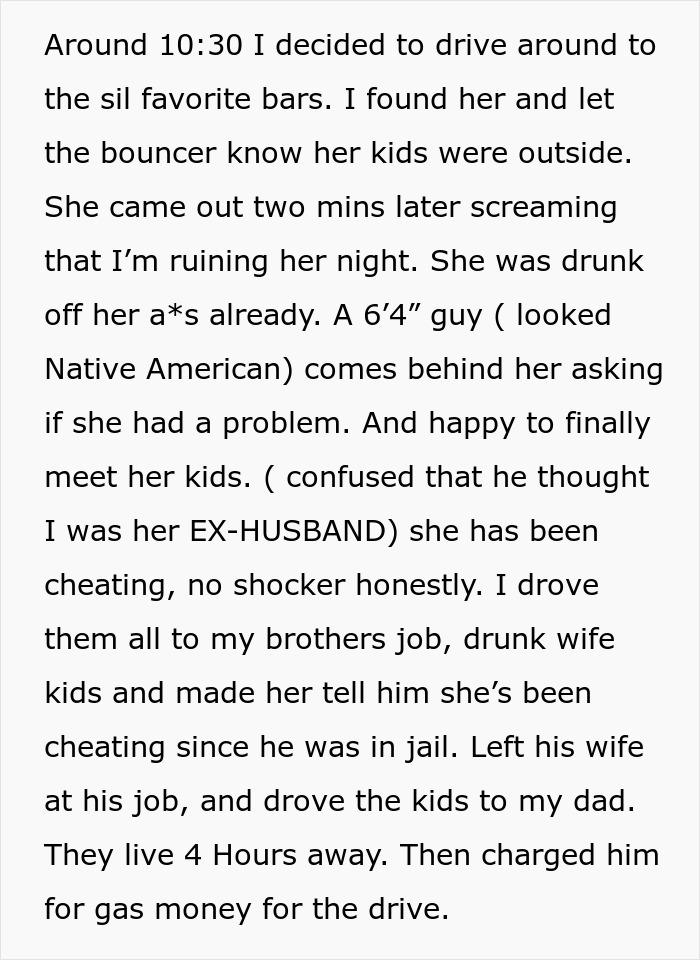 As someone who does not have any children of my own, but who has worked as a teacher, babysitter and au pair, I can say that taking care of children is certainly a job. Of course, parents do it for free every day, and they certainly receive more recognition for everything they have to balance, but it is completely unfair to simply pass off the job of taking care of your kids to someone else for free. Our loved ones can be counted on to help us out every now and then, but if we begin to take advantage of them, like the couple in this story has been doing for far too long, we can’t be shocked when our friends and family are suddenly nowhere to be found.

We reached out to Reddit user Ok-Statistician3072 to gain a bit more insight about the situation, and he was kind enough to share even more of his side of the story. We were curious if him and his brother have always had a tumultuous relationship, or if they had been close before he had become their go-to free childcare worker.

“Me and my brother have always been close,” he told Bored Panda. “Recently, since his wife’s side of the family has cut contact with them, it’s started to affect our relationship.” We also asked if he has tried to explain to his brother and sister-in-law that their children are not his responsibility. “I have had the argument, but the line ‘family helps family’ is always thrown in my face,” he shared. “And since my wife doesn’t have family of her own, she loves to have the kids around and be a peacemaker. So I’ve always been overly involved in my nephews’ lives.”

Unfortunately, there has not been any reconciliation between the siblings as of now. “My brother is currently not speaking to me,” Ok-Statistician3072 told Bored Panda. “He said I was wrong for bringing the drama to his job. His wife is currently staying with a friend, so there won’t be any contact from her.”

We were also curious if this situation has affected this uncle’s relationship with his nephews. “When children are constantly dropped off, left just to be with anyone who’s available, it tends to lead to resentment,” he shared. “They’ve expressed that they feel like a burden to the mom. Unfortunately, I have to set a boundary, but the oldest understands, and I have left open communication.”

It is a shame that family drama has had to come from something that should be so simple: taking care of children. But according to Verywell Family, utilizing relatives as babysitters can often lead to some uncomfortable and tense situations. Some of the cons of using a relative to watch your children are that you cannot control their style of parenting, they may lack the CPR and first aid training that a childcare professional would have, and resentments may build over time if one party feels taken advantage of.

Apryl Duncan at Verywell Family recommends that if family members will be involved in some sort of babysitting agreement, it can be useful to create a contract to set boundaries and establish rules. “It may feel strange to approach your family member with a contract, but this contract is more like guidelines to protect all of you from hurt feelings or harm to your relationship,” she writes. “Sit down together and define what you expect as well as what they expect from you.”

“The point of your contract is to make sure you’re both on the same page about your expectations, so there aren’t any surprises that lead to an awkward situation,” Apryl explains. “If in doubt that your family relationship could be damaged, hire a babysitter. It may just cost you less in the long run.”

It’s unfortunate that this father had to end up blocking his family members, but it seems like that was the only option left to look out for his own family and his sanity. We can only hope that over time, his brother and sister-in-law will learn from their mistakes and work towards mending their relationships. We would love to hear your thoughts on this situation in the comments below, pandas, and if you’ve ever had to navigate a similar situation with your relatives, feel free to share your personal stories as well. Then, if you’re interested in reading another Bored Panda article featuring a parent who feels entitled to free childcare, you can find that story right here.

Many readers shared their thoughts in the replies, assuring the father that he was justified in his response and recommending that he call the police if this ever happens again 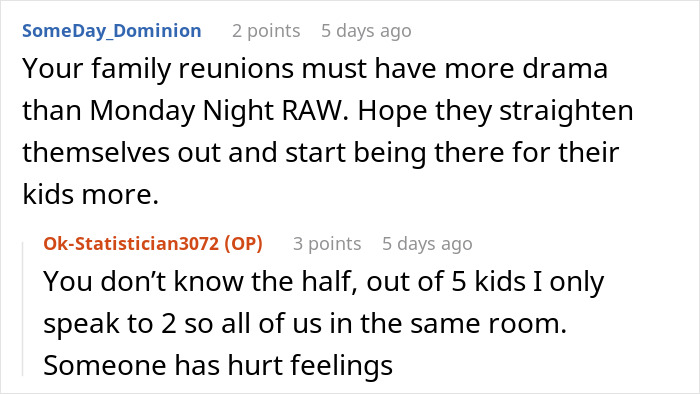 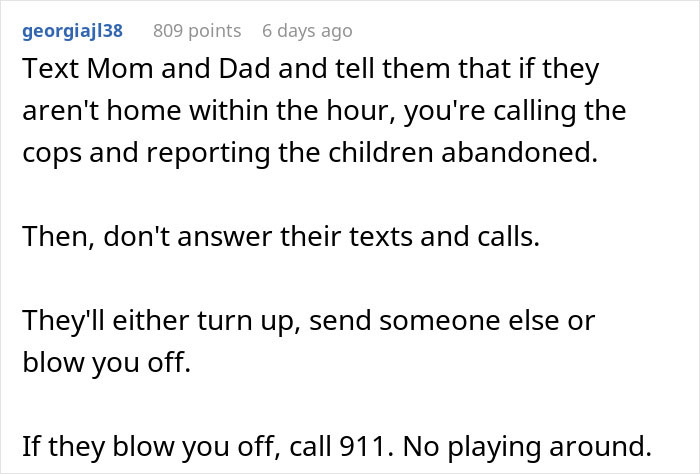 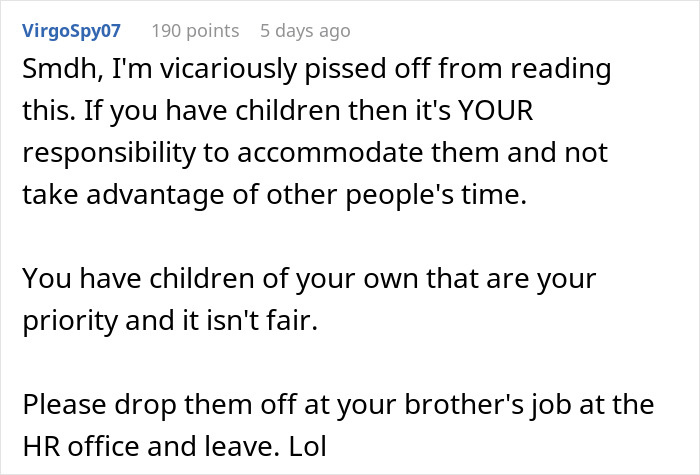 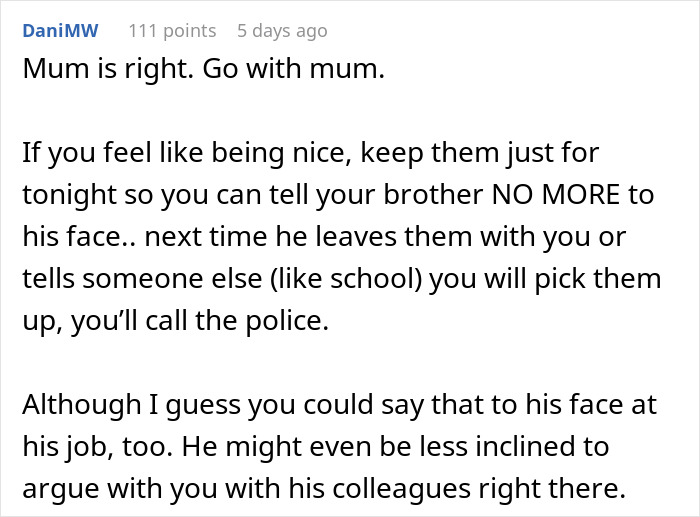 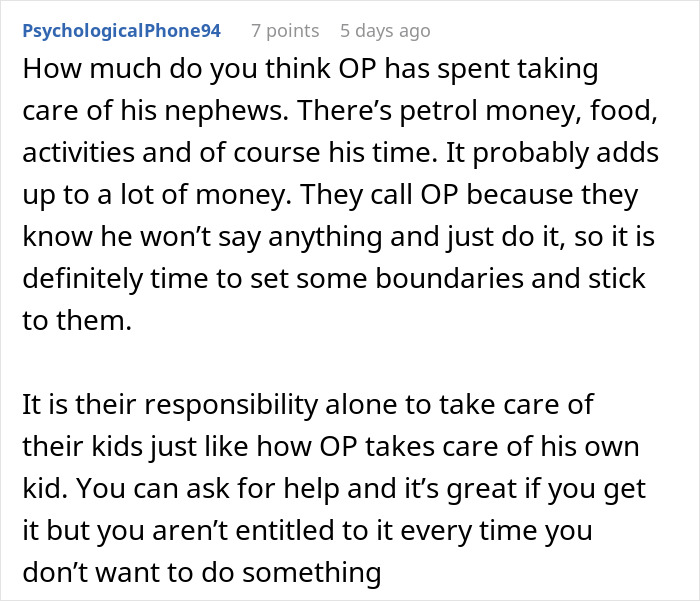 The post “My Brother And SIL Think I’m A Free Babysitting Service”: Man Finally Sets Boundaries After Being Constantly Left With His Nephews first appeared on Bored Panda.