Back in 2016 while working on blog posts about the woodworkers depicted in misericords I encountered a devilish creature holding a scroll of paper. At the time I thought he was just one of the many little demons carved on misericords. Recently, I found his name and realized he has followed me from when I wrote my first words at age four up until the present time. He is currently perched on my left shoulder taunting me to make a mistake. He is Titivillus, the demon responsible for typographical errors. I’m throwing punctuation and verb tense errors into his basket of writing miseries.

Titivillus (also Tutivillus or Tytinillus) has a history reaching back to the Middle Ages and his purpose was different from how we think of him today. In Margaret Jenning’s 1977 study of the origins of Titivillus she explained “…in their heyday, especially thanks to the Medieval preacher, demons were omnipresent. They rode on ladies’ trains, perched menacingly on lettuce, hid under beds, immersed themselves in fermented liquids, masqueraded as Don Juans and femme fatales, and remained consistently and perversely attached to churches and church people.” Indeed, it seems visions of demons, especially visions of demons noting the behavior of the congregation, were always had by members of the clergy.

At first there were two demons stationed in churches, monasteries and convents. One carried a bag or sack into which he gathered the snippets of half-spoken words, slipped syllables and abridged prayers of the clergy and laity. Each day this demon had the task of collecting (for the Guy Downstairs) one thousand spoken errors each day. 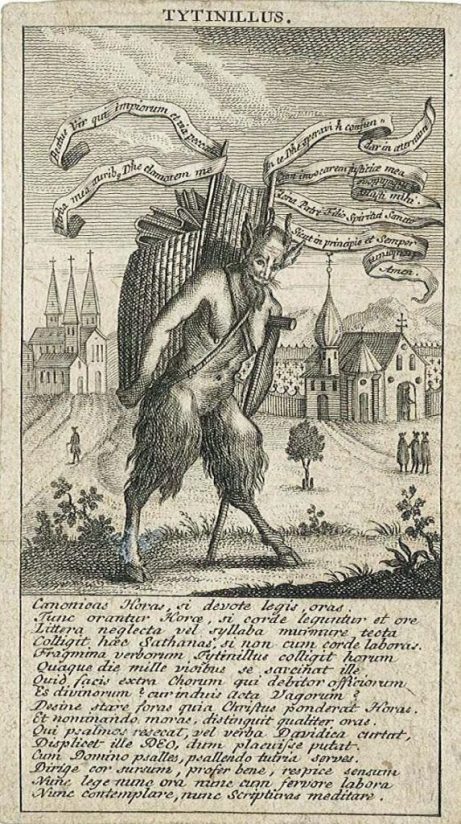 As the English priest, John the Blind Audeley wrote in the first half of the 15th century there should be no “over-hippers and skippers, moterers and mumblers.”

The second demon listened in on the members of the congregation and made note of idle chatter and gossip.

In these two misericords Titivillus, as the recording demon, positions himself between women to hear their idle talk. You can understand, if you didn’t know this was Titivillus, you might mistake these demons as a winged bull and a bat. The misericord at the top is especially damning as to each side of the gossips are an old woman and a monk kneeling in prayer.

At some point the demon carrying a bag of misspoken words and the recording demon merged. The more prevalent depiction of Titivillus, whether on a misericord, a fresco or printed in a book, was the recording demon. He listened and he wrote on long scrolls a paper or in large books.

Some remarkable frescoes featuring the recording demon were painted on church walls. The 13th-century fresco at the top-left (almost lost to Victorian restoration) shows Titivillus above two women in an argument, with another demon perched on the back of each woman. The demon from Faneford church with his trumpet-like ears is especially well-equipped to hear the latest gossip (with the added feature of horned kneecaps).

This bench end shows the merging of the bag-carrying demon and the scribe. While he toils at his writing a small flower grows near the ink pot.

Ah, ha! This carved wood roof boss proves men gossip, too. Nestled just above their gossiping heads is the recoding demon making note of their conversation. If a parishioner were to look upward to the highest point of the church ceiling there was yet another reminder to avoid distractions from the service. 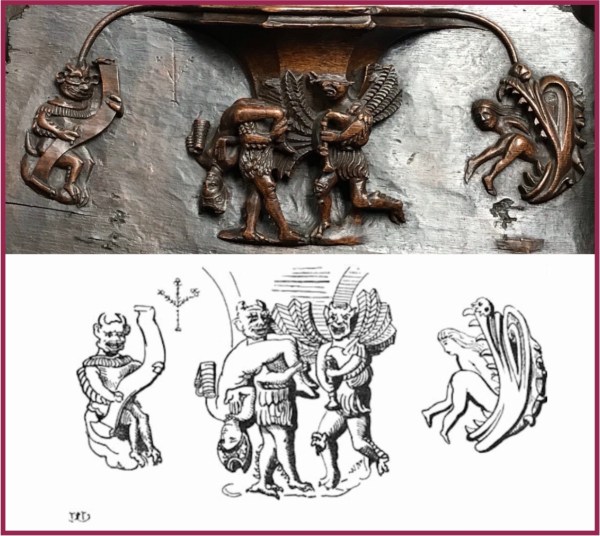 My nemesis at the top of the post is a side figure on this mid-14th-century misericord from St. Laurence’s Church in Ludlow, England (sketch is from Project Gutenberg). Another function of the recording demon was to be present when a sinner was judged. This is the judgment of a dishonest alewife, a most grievous offense in the Middle Ages. Titivillus, on the left, has an account of her transgressions. In the middle section one demon has the alewife over his shoulder while the second demon plays the bagpipes. On the right, the alewife is thrown into the jaws of Hell.

In Margaret Jennings study of Titivillus she wrote the point of this Medieval demon was to remind clergy and laity of the danger of “spiritual sloth.” The litany of the service, each prayer and each song were to be unhurried, expressed clearly and with fervor.

To say or sing by rote and without care, to attend church, but not participate wholly was to open oneself to sin. Hence, visual reminders of a recording demon, as well as other devilish minions, were found on wood, walls and paper. In the hand-colored woodblock above three women gossip, one demon scribbles away and the second demon stretches a scroll with his teeth because they need more paper!

This lovely old church was built in 1674 in Cmolas and later moved to Poreby Dymarskie. The walls have polychrome paintings including one in a note-worthy spot. 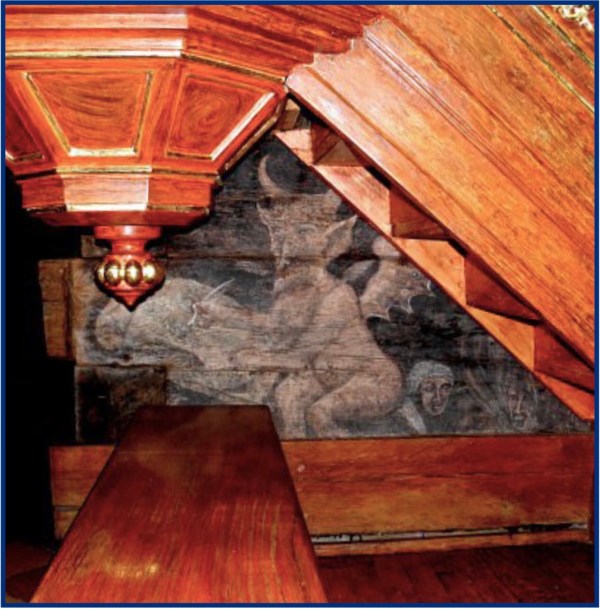 Under the steps leading to the pulpit there is a painting of Titivillus, pen in hand, observing the parishioners. He probably has already recorded the transgressions of the women behind him. If the priest abridges, mutters or mumbles that will be recorded, too.

Even saints were not immune to the presence of Titivillus. As St. John the Evangelist sits calmly and writes his gospel his ink is being pored out by the demon. This image is a turning point in that the demon is not recording a transgression, he is setting up St. John to fail in his writing. This may be some mischief on the part of the scribes that drew and decorated this page. Each saint in this manuscript depicted writing their gospel or teachings can be easily identified by a personal symbol, in St. John’s case, the royal eagle. St. John’s page is the only one with a demon “up to no good.” In remarks in the margins of manuscripts scribes often complained about their working conditions, spoiled ink and poor-quality paper. Perhaps this is the start of Titivillus shifting from the recorder of transgressions to the instigator of written errors.

St. Bernard, pictured above, had an argument with a devil. The argument was over the recitation of psalms that would lead to salvation.  This image is often used today to illustrate the the stand-off between the writer and Titivillus. I look at his illustration and can imagine Titivillus taunting me in a sing-song voice saying, “You are going to make a mistake.” I’m OK with a typo or two, or three.

Fortunately, there is a way to quiet the pesky causer of typos (and other writing errors) and it is comes courtesy of the Virgin Mary.

A Portable Work Table With a Unique Collapsing Method

How They (Used to) Make Rope

A Sharp Design Departure for Mercedes: The Concept EQT

"New Details" Suggest Execs, Not Hackers, Shut Down Colonial Pipeline Due to Inability to Bill Customers