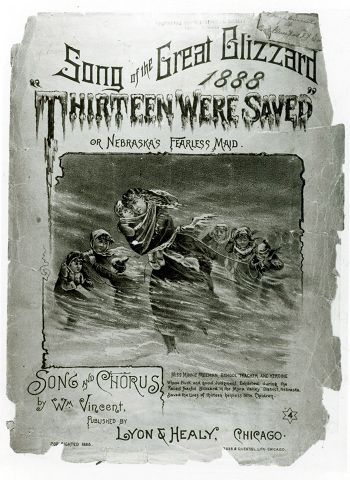 Neatorama is proud to bring you a guest post from history buff and Neatoramanaut WTM, who wishes to remain otherwise anonymous.

When one hears mention of the year 1888, it usually concerns something involving Jack the Ripper, but many noteworthy events other than the Whitechapel Murders occurred that year. Vincent Van Gogh cut off his ear. The ballpoint pen was patented. George Eastman produced the first Kodak camera, and National Geographic magazine published its first issue. And then there was the winter of 1888, which produced The Great Blizzard of 1888, the worst in US history.

The Great Blizzard, aka “The Great White Hurricane”, was a major winter storm that adversely affected the Northeast, which became literally buried; snow in New York City alone was over fifty feet deep in places. Hundreds of deaths resulted and commerce ground to a halt. The Hudson and East Rivers froze over. As is often the case, though, good comes from bad, and the greatest effect of The Great Blizzard of 1888 was to cause New York City to construct its subway, which first opened for business in 1904.

But just two months earlier than The Great Blizzard of 1888, another major winter storm in the Midwest, the ‘Schoolhouse Blizzard’, aka ‘The Children’s Blizzard’, claimed the lives of more than 200 people, most of them schoolchildren. However, not as many children died as otherwise might have, this due to the heroic efforts of Minnie Freeman, aka Nebraska’s Fearless Maid. 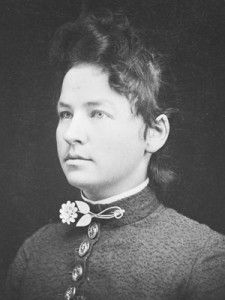 Minnie Mae Freeman was born in Pennsylvania in 1868, and her family moved to Nebraska in 1871. As such, she, like other inhabitants of the Great Plains, grew up to be ‘weather-wise’. Not only is Nebraska deep in the heart of Tornado Alley, its summers can be infernal and its winters as severe as those of the Arctic. Minnie soon came to learn, as did everyone else in the Great Plains, that one didn’t live to old age by not paying attention to one’s surroundings.

Minnie was only nineteen years old when she got a job as schoolteacher in rural Mira Valley, Nebraska, teaching thirteen (or seventeen, accounts vary) children of all ages and grades in a small, isolated sod schoolhouse, the Midvale school.

January 12, 1888, started as many other winter school days had, except that it was unusually warm for Nebraska in January, and many people that day had left for work or school or errands wearing clothing unsuitable for the usual seasonal cold weather.

During recess that day, Minnie was outside with her charges when she looked to the north and saw a blue stripe on the horizon. She instantly recognized it for what it was – a dreaded ‘Blue Norther’. ‘Blue Northers’ were winter storms that were especially feared in the Great Plains states because they struck without warning and often with hurricane force. Temperatures often dropped to well below zero in just a few hours, but worst of all was the threat of a severe ‘whiteout’ blizzard in which no horizon could be seen and one could easily become disoriented and lost in the storm, often with fatal results. 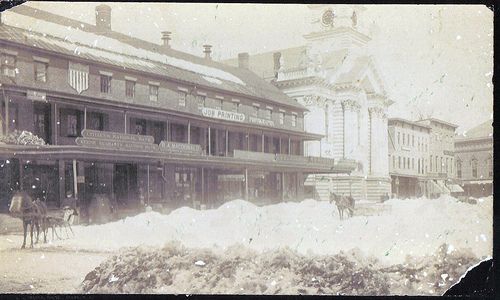 Minnie was aware of all these possibilities and she lost no time in herding the children back into the schoolhouse, where she quickly took inventory of their options. There weren’t many. She could have kept everyone inside and waited out the storm, hoping that frantic parents would arrive in time to rescue them. There was coal available for the one small stove but the children did not have clothing suitable for a long wait in subzero temperatures and there was no food. She could have set out cross-country for the nearest farmhouse, but she was unsure that the children could make it through the severe cold, ferocious winds, and whiteout conditions dressed as they were. 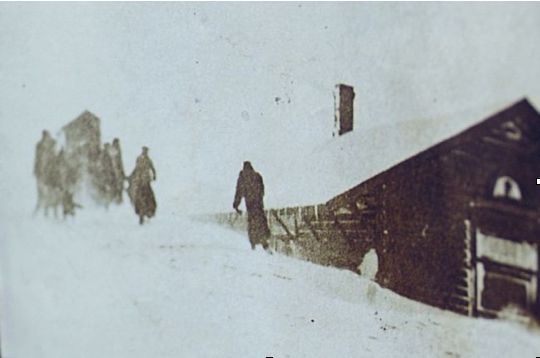 What prompted her decision to evacuate were the wind gusts that tore the door off of the schoolhouse and also ripped off part of the roof. Fearing loss of the remainder of the roof, and quickly concluding that they could never survive where they were under those circumstances, she fell back on Plan B, which was to tie the children together in single-file with clothesline and set out for the nearest farmhouse, that was one-half to one mile away (reports vary). Luckily, she was quite familiar with that route since she boarded in that same farmhouse.

Carefully getting her bearings before the whiteout hit in force, they left the schoolhouse through a south window and she led the children through the blizzard, carrying the youngest. By this time the temperature had already dropped to below zero. The whiteout enveloped them well before they reached the farmhouse, but Minnie’s unerring sense of direction and determination to save the children and herself prevailed, and all reached the farmhouse safely. 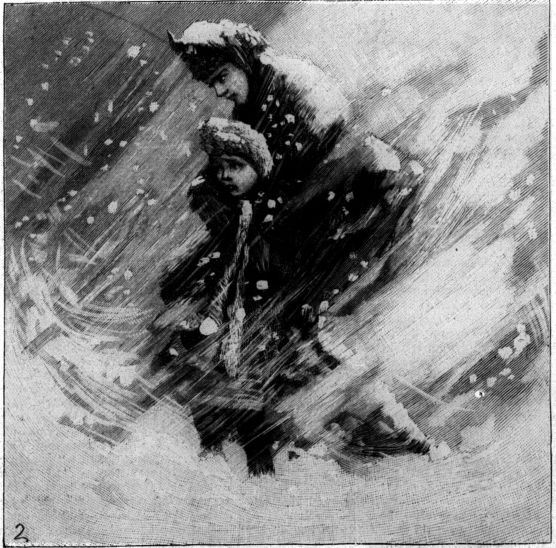 Others were not so lucky. Numerous other Nebraskan schoolteachers elected to ride out the storm, expecting aid to arrive before it was too late, but it did not arrive until days later, by which time everyone concerned had frozen to death. Some other schoolteachers, like Minnie, decided to evacuate but quickly lost their bearings in the whiteout, wandered with their students out into the wild, and all froze to death. Some few schoolteachers, panicked by the raging storm, simply dismissed their classes, relying on the children to find their own way home in the blizzard. Children thus dismissed were caught in the full whiteout. Some lived, many did not. In one heartbreaking instance, two brothers were hurrying home when they were caught by the blizzard. They realized that they had to get out of the wind if they were to have any chance of survival, so they burrowed into the snow. Several days later, help did arrive but too late. The younger brother had frozen to death, and the elder, who did survive, lost both feet to frostbite. Others survived by burrowing into haystacks.

For her actions, Minnie herself became not only a local hero but a state and national hero as well. The Omaha Bee proclaimed in a bold headline:

Her image was rendered in wax and exhibited throughout the nation. Reportedly, she received 80 proposals of marriage through the mail, all from men whom she had never even met. Lyon & Healy, a Chicago music publisher, released a song about her heroic deed: “Song of the Great Blizzard 1888, Thirteen Were Saved or Nebraska’s Fearless Maid.”

Minnie was taken aback by all the publicity. Naturally shy, she wanted no honors for simply doing what she considered her job. Those students were her responsibility and she was going to save them or die in the attempt. She felt that was what she was being paid to do and to do anything less would be a dereliction of duty.

The furor eventually died down, as it always does, and Minnie’s life returned to normal.  She did marry, and married well, the groom being Edgar B. Penney, president of the C. A. Mosso Chemical Company. She and her husband remained active in Nebraska politics although they split their time between Nebraska and Chicago. Among other things, she was one member of a committee of three that selected the new Nebraska state seal. 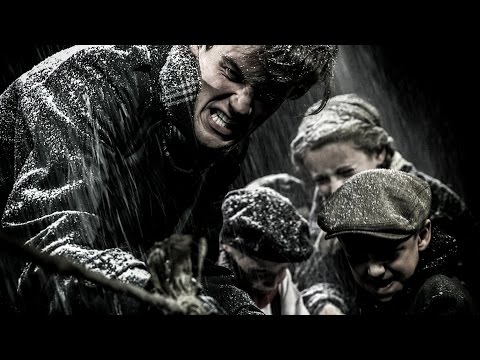 Raw Moments in Myth and History

Encyclopedia of the Great Plains

Only in Your State

Encyclopedia of the Great Plains

The Wrath of God: Blizzards: Whiteout!