Caring for the environment is great and very commendable. Good relations with neighbors are no less great. However, any mother would not be a mother if she did not care more about the safety and health of her own child, especially if this child is still small.

Toddlers are a constant source of potential trouble for themselves, because curiosity almost always prevails over their sense of security. It will take a long time before they begin to correctly assess the level of potential danger – but for now, all responsibility for their life and health lies with their parents.

For example, this mother also put her child’s safety above everything else, and as a result, it seems that she got into a serious argument with her neighbor. The woman told her story in a post on Mumsnet’s Am I Being Unreasonable Forum, and most people in the comments supported her. However, let’s not get ahead of things.

The Original Poster was upset upon discovering a wasp nest in her garden as she was worried for her 5 Y.O. son’s safety 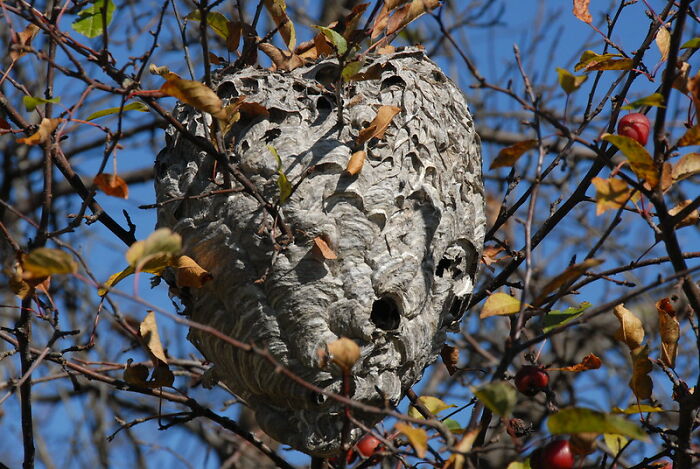 So it all started at the beginning of summer, when the Original Poster found a wasp nest in her garden. We must say that the woman was very upset, because she planned that her 5-Y.O. son would spend a lot of time outdoors this summer.

The fact is that the boy is disabled, and the garden is usually a safe place where he spends most of his waking hours, so the mother was quite reasonably afraid that the wasps might attack the child and harm him.

According to statistical data, the number of wasp attacks in the 21st century grows from year to year

It must be said that the OP’s fears were not entirely unfounded. So, according to the National Vital Statistics System for the United States, published in 2019, the number of deaths from wasps and similar insects in the country over the two decades of the 21st century has been increasing almost every year. And these statistics still do not take into account probable health problems due to allergies after a wasp sting. 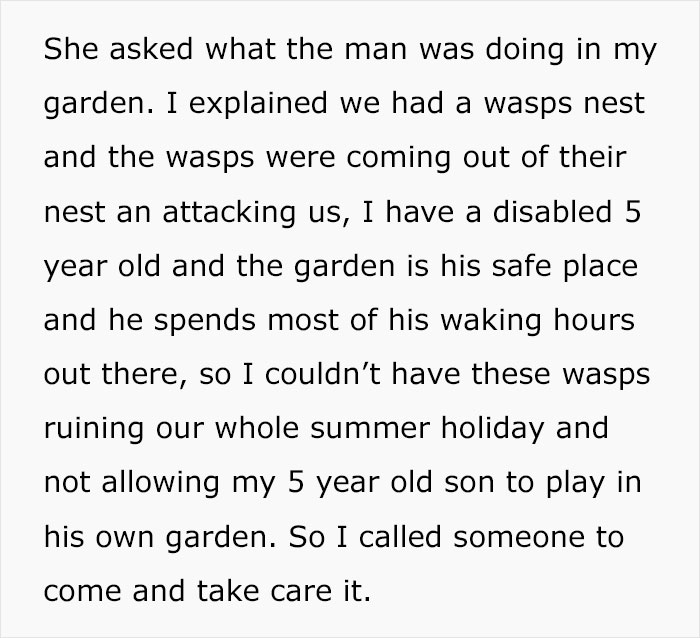 “Not all allergic reactions are life-threatening, so a mild reaction localized to the sting area can usually be treated at home,” says Gene Conti, MD, an emergency medicine doctor at Halifax Regional Medical Center in Roanoke Rapids, North Carolina, in an interview with Everyday Health. Nevertheless, the OP was seriously worried as after all, her son already has health problems.

So, the woman called an exterminator, who filled the nest with a poison powder, after which he removed it from the garden. More trouble came later when her older neighbor called out the OP when she saw lots of dead baby wasps in her bathroom, covered with the same pest control powder. 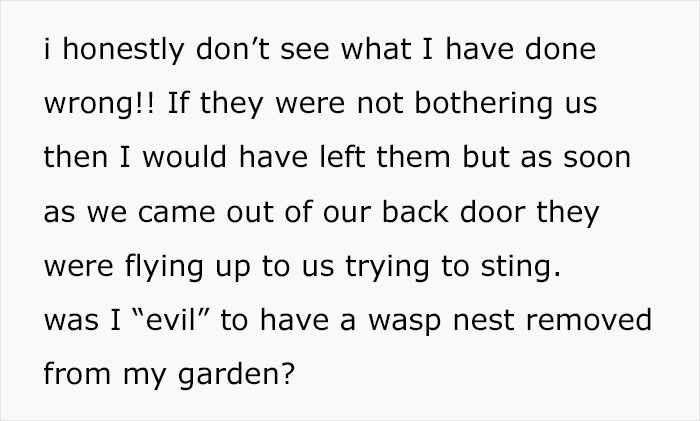 The neighbor was indignant and called the OP’s act “evil,” ignoring the mom’s words that she was just worried about her son. The neighbor said that the mother could keep the child inside the house, waiting for the wasps to leave their garden. After all, says the OP, she didn’t want to let the wasps ruin her son’s summer.

Most of the commenters, however, supported the OP and told her she did almost everything right

However, most of the people in the comments supported the OP, noting that the only thing she did wrong was not warning the neighbors in advance about the upcoming pest control. After all, when wasps fly in through your bathroom window, covered in some poisonous powder, it’s not really a pleasant thing. 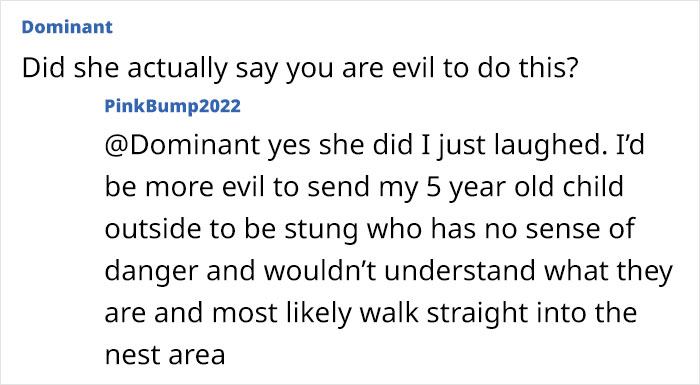 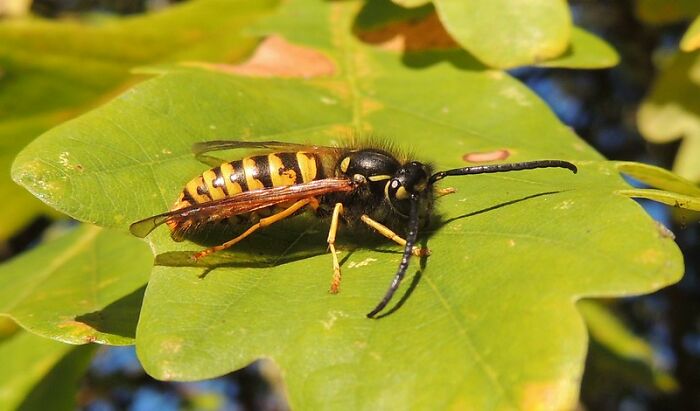 According to some commenters, it’s pretty stupid of a neighbor to call the OP “evil” for killing wasps – after all, we don’t consider ourselves evil for swatting flies too! And one of the commenters also noted that when they had wasps in their garden too, they were very afraid for their toddlers. In general, most believe that the OP did everything right. 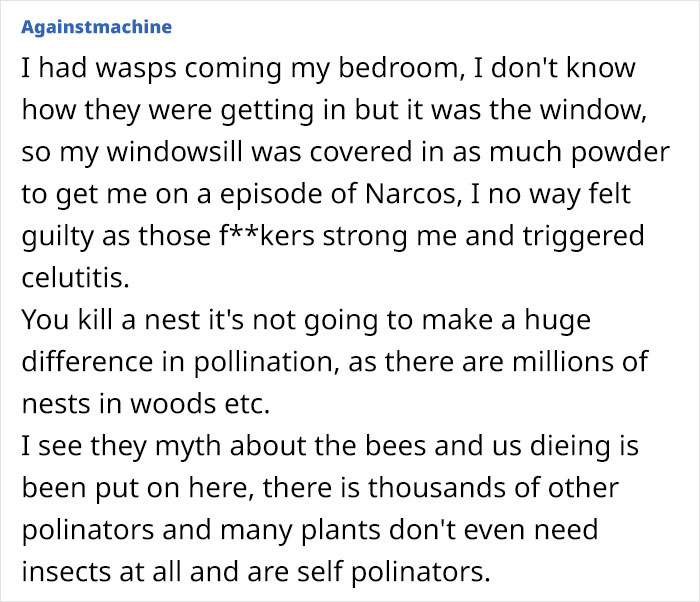 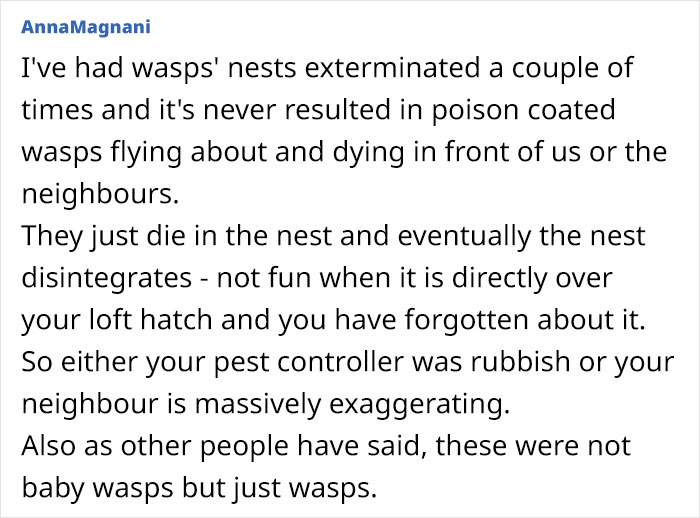 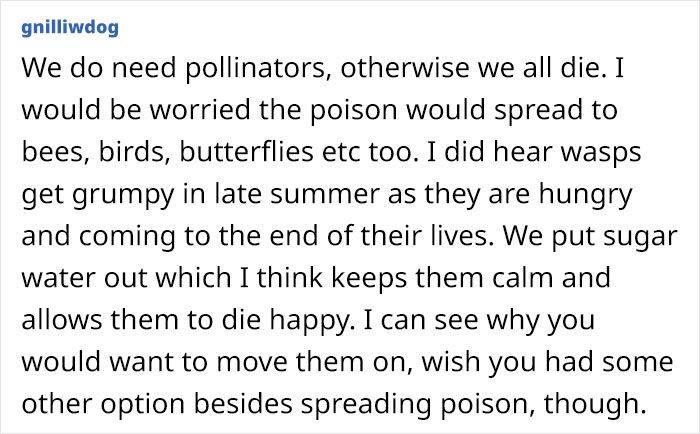 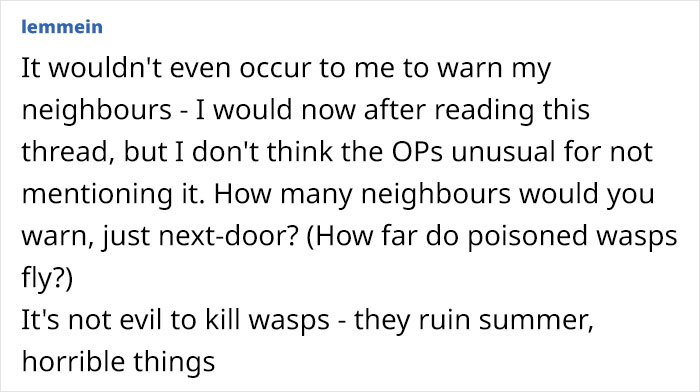 Now we’d like to know: what do you think of the OP’s behavior? Perhaps you, too, have had to deal with wasps in your garden and maybe even with their stings? As always, we are waiting for your comments and, perhaps, even for some similar stories.

The post Neighbor Calls This Mom “Evil” For Asking Pest Control To Remove A Wasp Nest To Protect Her 5 Y.O. Kid, She Wonders If She’s A Jerk For Doing So first appeared on Bored Panda.