Even the most beautiful house can turn into a headache if you live next door to the wrong kind of people. So let’s be honest: annoying neighbors are every homeowner’s nightmare. Whether they feel the need to declare unwanted opinions on your lifestyle or complain about the tiniest details in your front yard, pesky neighbors are always difficult to cope with. And if they have a bad attitude, finding a solution and setting healthy boundaries is next to impossible.

This is the situation one woman recently found herself in. As shared in her post on Mumsnet, it all started when her neighbor kept making a fuss about a bush in the user’s garden — and a handful of leaves that ended up in her driveway. At first glance, this seems like a minor issue. But it was enough for the lady to create a series of demands that placed the couple in the middle of a silly garden war.

After getting fed up with the lady’s behavior, the woman asked for perspective on whether they should “let her win” or challenge her ridiculous request. Scroll down to read the story in full, as well as how the community reacted. Let us know what you think the best course of action for this situation is, and be sure to weigh in on the discussion in the comments!

Recently, a woman shared how her neighbor kept complaining about “a handful” of leaves from a bush in her driveway 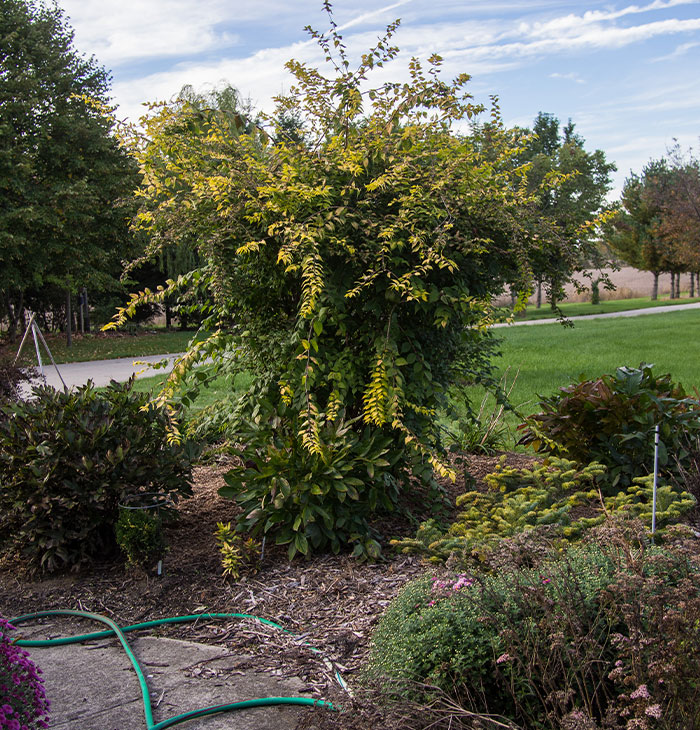 Feeling sick and tired of this behavior, she turned to the internet for advice 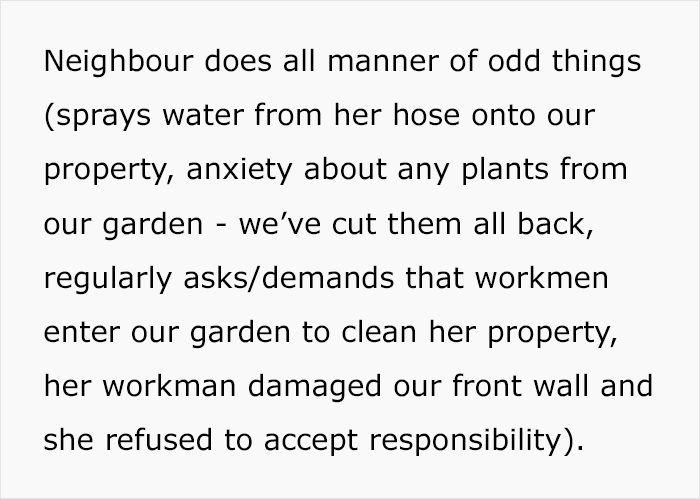 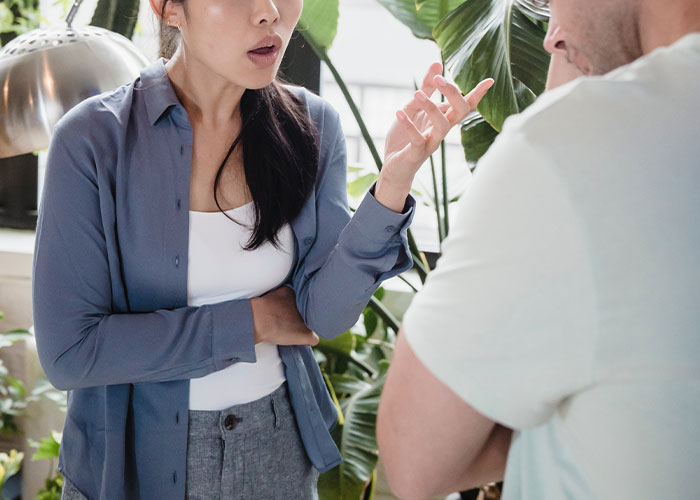 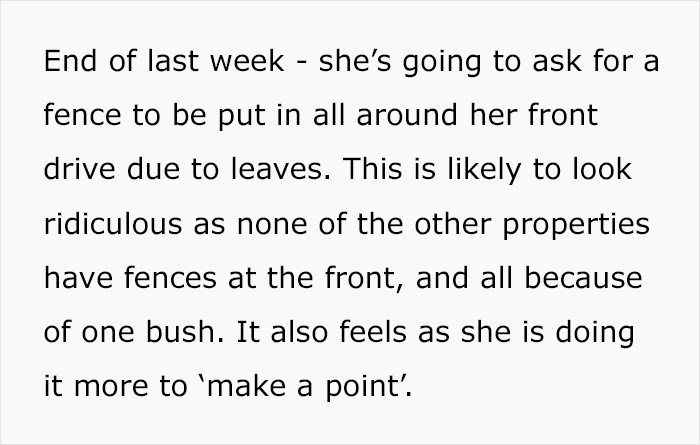 It’s easy to understand the lady’s desire to live as comfortably as possible on her own land. But trying to control your neighbors is never the answer. These behaviors can lead to long-lasting arguments about minor issues that shouldn’t be a problem at all. They can especially take a toll on the residents if they consistently give in to their neighbor’s harmful repeated patterns. As the woman explained in her post, the lady always seems to find something to obsess over and create tensions between her and the people living in close proximity to her. But the more alarming issue is that she doesn’t even acknowledge it.

After reading the story, people immediately jumped to the comment section to offer advice. Some users suggested responding to the lady’s pettiness in an equally petty way — to leave the bush where it is or even put more plants nearby to irritate the lady. Some mentioned the woman overcomplicates things and further hurts the relationship. And others said that no matter what the couple decides, it won’t ever be enough for the neighbor, so they might as well ignore her complaints.

This is just another example proving tensions and disputes between neighbors are inevitable. But when your neighbor showcases signs of a controlling personality, it’s a whole other level of complicated. According to WebMD, controlling people usually want to have a say in other people’s lives. They may do this out of anxiety or a personality disorder because they worry things may go wrong if they don’t maintain control. Or they may opt for these behaviors to assert dominance. Whatever the cause, crossing paths with them can be demanding, so it’s best to know the signs to look out for and the ways of dealing with them.

One of the most evident signs of controlling behavior is that they insist everyone do things their way. Even on small issues that refer to their personal choice, such as having problems with a bush growing on another person’s property. Another hint is that they are incapable of accepting blame. “Even when their actions are clearly the issue, they will find some way to blame you for what went wrong. It may be as petty as accusing you of distracting them when they made a mistake.”

When it comes to dealing with controlling people, WebMD suggests determining the severity of the behavior and then acting accordingly. “If the controlling behavior is mild, it can help to discuss it with the offender. You can tell them how their behavior makes you feel, using ‘I’ statements to avoid sounding like you’re blaming them. A sentence that begins with, ‘I feel,’ will likely be better received than one that starts with, ‘You always.’ You will probably also need to set clear boundaries to see a change.” 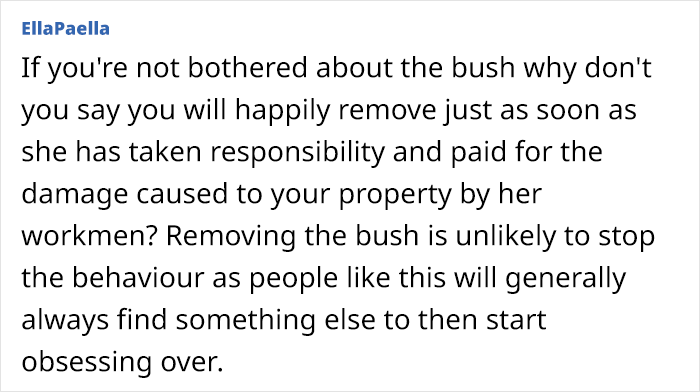 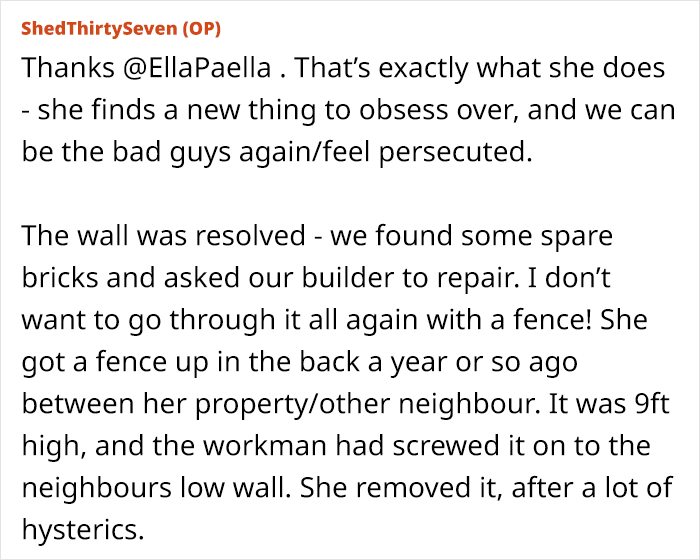 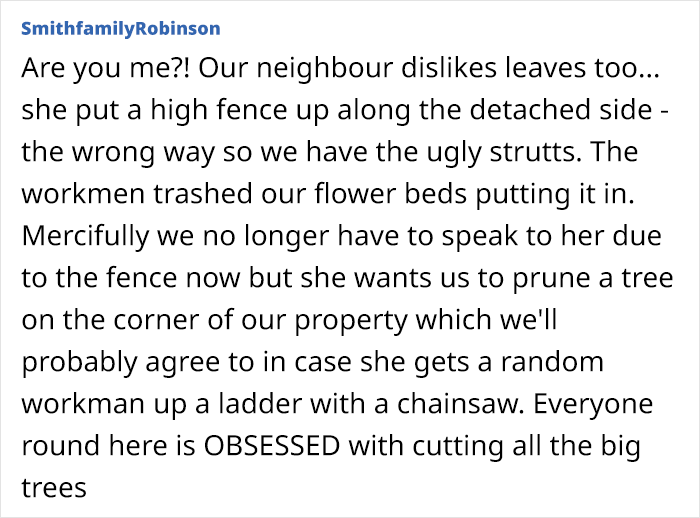 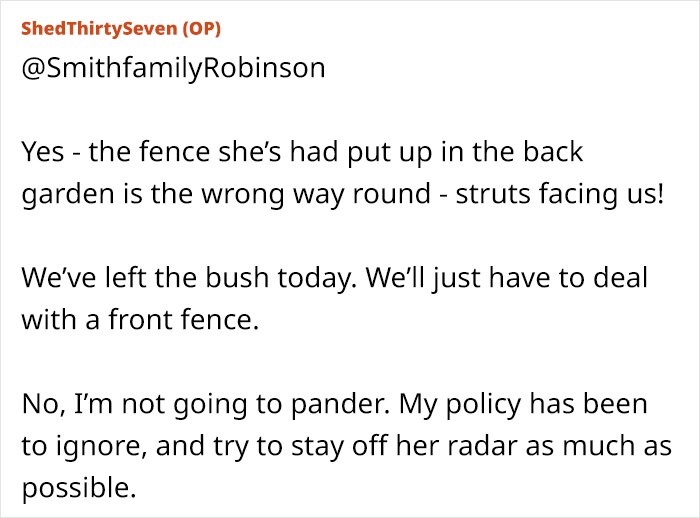 As Dr. Jesse Matthews, a licensed clinical psychologist based in Chester Springs, PA, told Bored Panda in an earlier interview, we will all encounter people who want to take advantage of us, and we don’t always see eye-to-eye with our neighbors. But in most cases, simply talking peacefully to one another is the best way to solve a problem.

“You can bring it to their attention if you think it’s important to let them know you see it or if you want to give them the opportunity to change. Or, if you would rather not confront them, you might simply back away from the relationship, responding less frequently to their calls or texts, not reaching out to them, or being ‘busy’,” he explained some of the ways of dealing with these situations, adding that it also helps to set healthy yet firm boundaries.

When it comes to conflicts between neighbors, Dr. Matthews said they typically emerge because one household violates another’s ability to enjoy their lifestyle, like being noisy late at night. “Beyond that, however, there are neighbors who are jealous of others, who don’t like people for various reasons, or some other things they are doing might bother them,” he noted. “It could be a matter of them not minding their own business, which we see a lot of these days with so many ‘Karen’ videos online.”

If you’re wondering about solutions to these disputes, it’s important to be respectful so everyone can live peacefully. But at the same time, “you also need to distinguish between what are valid complaints and what is just someone not minding their own business.”

“If a conflict arises, you should always try to be tactful and respectful, trying your best to keep any problems to a minimum. But you may also need to be assertive and set or hold boundaries with neighbors. If you believe they are asking too much or concerning themselves with something they shouldn’t, don’t be afraid to let them know. And the more you can resolve conflicts on your own the better,” Dr. Matthews concluded.

Readers were quick to share their reactions to the situation, here’s what they had to say 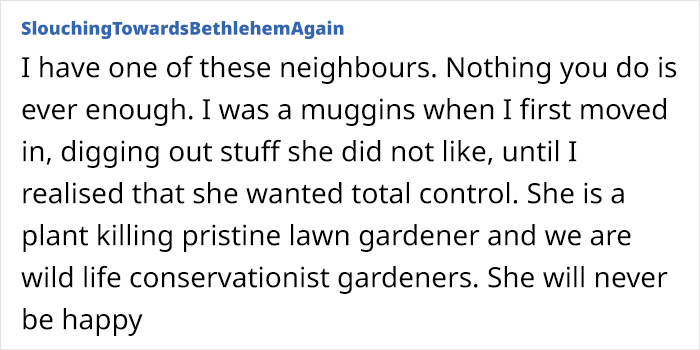 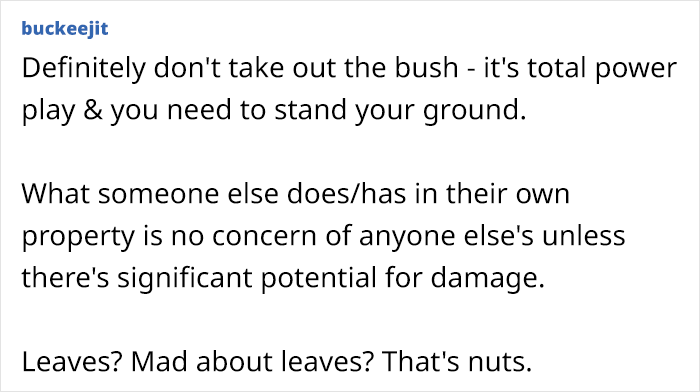 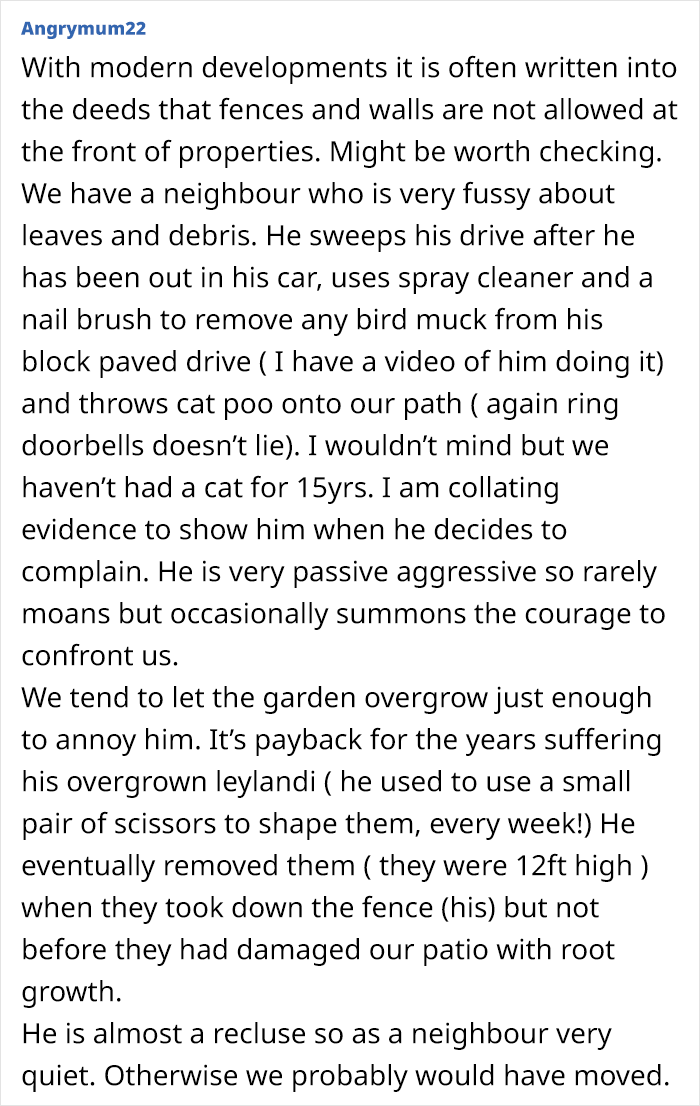 The post Neighbor Obsesses Over This Woman’s Bush And Threatens To Put A Fence Up, Woman Asks If She Should Just Let Her ‘Win’ first appeared on Bored Panda.