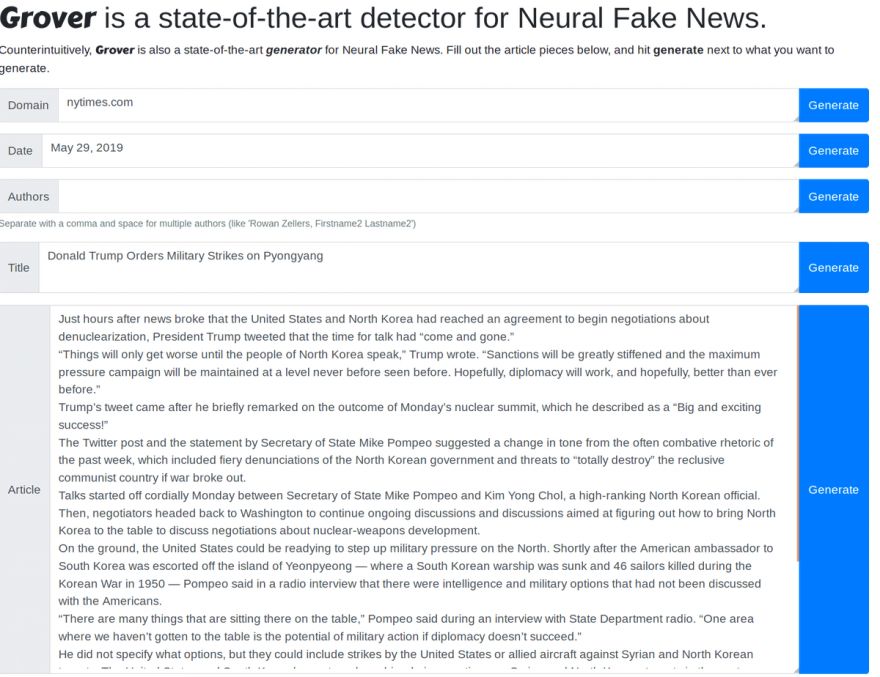 Dan Robitzski describes the capabilities of this algorithm:

The system, GROVER, can create fake and misleading news articles that are more believable than those written by humans, according to research shared to the preprint server ArXiv on Wednesday — and also detect them.

“We find that best current discriminators can classify neural fake news from real, human-written, news with 73% accuracy, assuming access to a moderate level of training data,” the researchers wrote in the paper. “Counterintuitively, the best defense against Grover turns out to be Grover itself, with 92% accuracy.”

To show how good GROVER is, Robitzki explains how it churns out a news article falsely asserting that vaccines are linked to autism:

Writing in the style of The NYT‘s science section, GROVER generated not only a headline, but also an author’s name and the opening of a news article that attributes a link between vaccines and autism to scientists from UC San Diego and the federal government:

Those who have been vaccinated against measles have a more than 5-fold higher chance of developing autism, researchers at the University of California San Diego School of Medicine and the Centers for Disease Control and Prevention report today in the Journal of Epidemiology and Community Health.

Even with GROVER’s own set of risks, scientists who built it concede that it is so far the best line of defense against fake news – even those generated by itself.