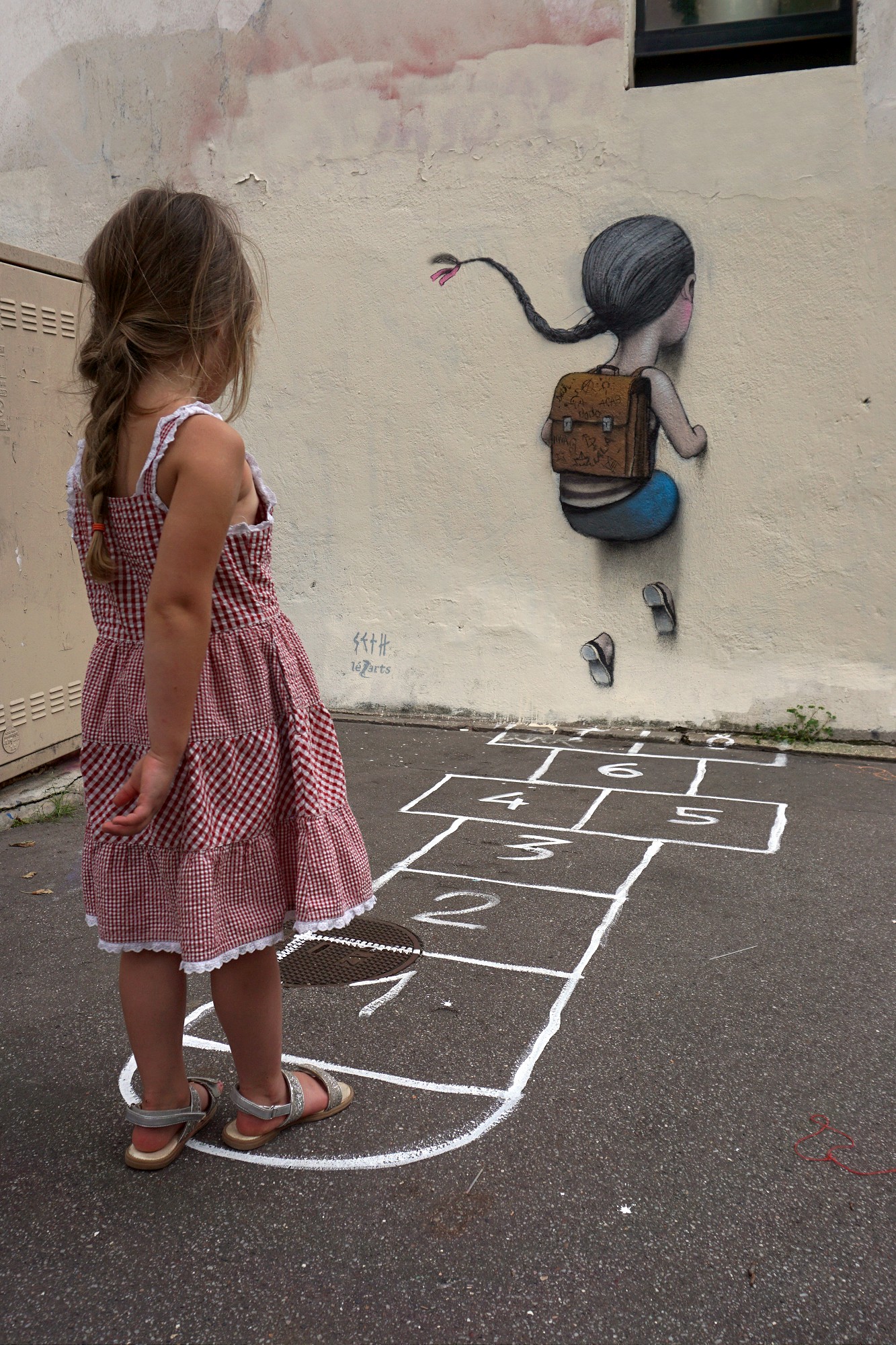 French artist Julien Malland aka Seth Globepainter (previously) continues to create childhood-inspired interventions around Paris and the world. Earlier this year he had a major museum solo show at MoCA Shanghai which included elaborate sculptures and site-specific installations. He also painted one of his largest pieces to date on the banks of the Seine in Paris, and took part in a creation associated with the upcoming museum of street art at the Mausa Vauban. Malland’s poetic murals resonate with audiences of all ages. “Sweetness and innocence from childhood regularly contrasts with the chaotic environments I choose to put them in,” the artist tells Colossal. He often places the children in environments with books as a reference to their imagination and creativity. After intensively traveling to over fifty countries during the last two decades, Malland is very much aware of the way globalization and modernization are influencing local traditions. “We read less and less with the proliferation of screen habits,” he explains. “While reading we create our own images suggested by words. The screen makes us lazy and spoils our imagination.” Eight years after his first visit to Shanghai, Malland went back to the city this March to introduce a large project which took place both inside MoCA Shanghai and in its old alleys. Focused on the idea of childhood memories, the outdoor interventions were cleverly created on crumbling buildings and in deserted side streets. The works depicted children playing emblematic games of the ’70s and ’80s, and evoked the atmosphere of the once lively neighborhood. “The vanishing traditional way of life is being replaced by a more common consumer society,” he explains. “This kind of transformation is worldwide, but it’s faster and more sudden in China. Painting those emptied neighborhoods gives me the opportunity to highlight this metamorphosis and continue to explore the traditional Chinese habits that still intrigue me.” A few months later he took part in a project initiated by Itinerrance Gallery and the Paris City Hall, painting the banks of Seine along with 1010, Momies, and Nebay. The four artists created a long stream of colorful artwork that following the riverbed for a little bit over a mile. Along with 1010’s trompe l’oeil abstraction of an abyss, Momies’ graphic composition in the colors of the French flag, and Nebay’s calligraphy, Malland painted an anamorphic piece visible exclusively from the Pont de la Concorde. The work depicted a child sailing on a paper boat through a rainbow vortex—another incarnation of his imagery that speaks about the purity and boundlessness of children’s imagination and spirit. Finally, back in June this year he created two pieces inside of Mausa Vauban, an upcoming museum of street art in Neuf-Brisach, France. Once again he explored the idea of children at play. One work is a compelling installation of a little boy breaking a wall and leaving a pile of colorful bricks stacked around the room and an open passageway. Malland is currently preparing for solo shows in London (November 2018), and Shaghai (January 2019), as well as an outdoor project in a pediatric hospital in the US, and is also working on several new books. You can follow his travels throughout the globe on Instagram.