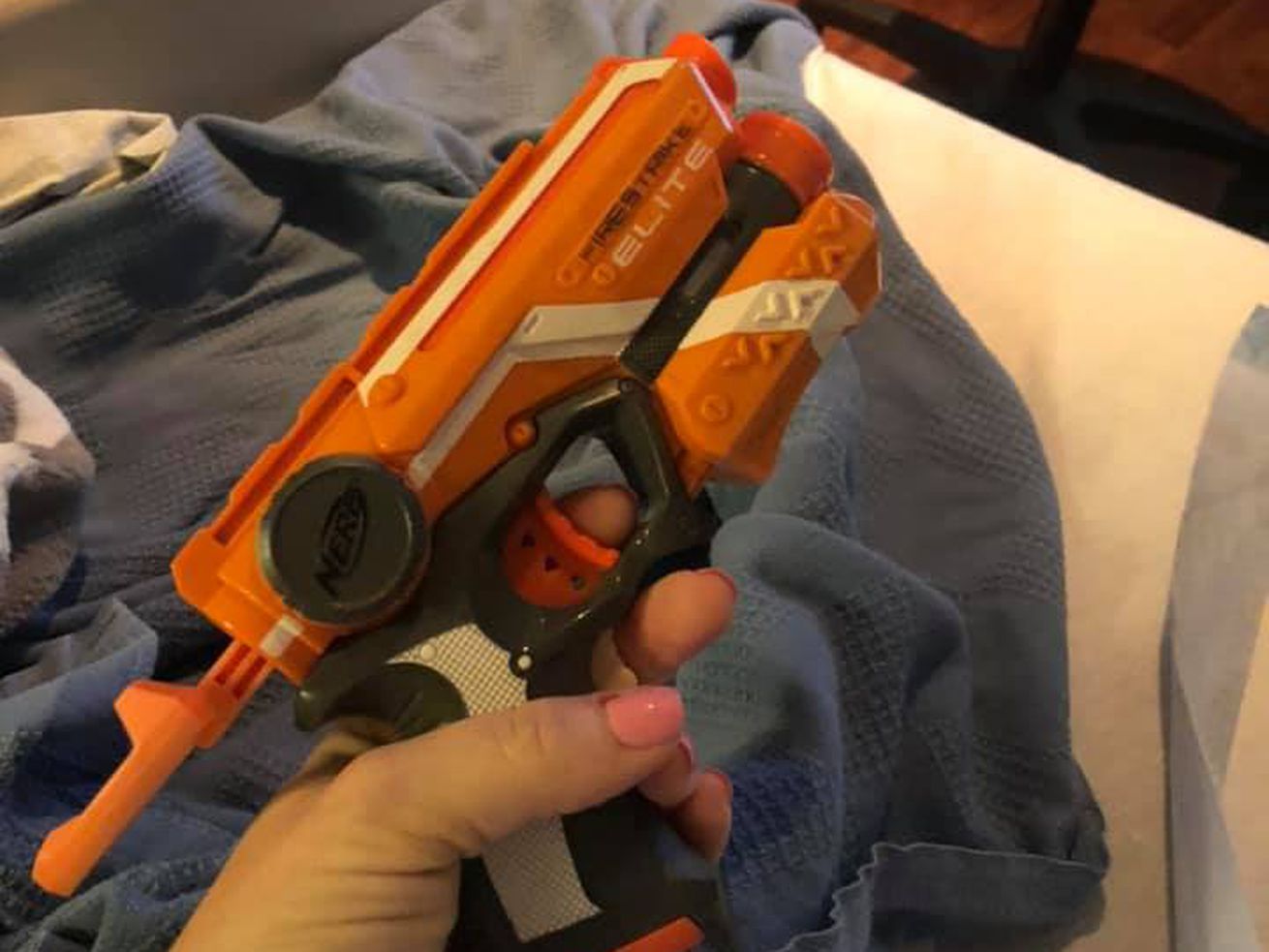 If anyone has the right to pop their spouse in the head with a foam dart, it’s someone who just gave birth to a baby

Now, I’ve never personally incubated a human inside my body and then expelled it so I can’t talk about what giving birth is like from personal experience. However, I was in the room when my little brother was born so I can at least make an educated guess, and by my calculations, it doesn’t look like a super great time. Calling it “labor” doesn’t even seem like it packs enough oomph, it should be called “LABOR”, like all medical texts should be required to capitalize and bold it by law and anytime doctors say “LABOR” it should be followed by a symbol crash. Every medical office should have one guy holding symbols on staff. I digress.

Suffice to say bringing a baby into the world is exhausting work, both mentally and physically. So in the aftermath I could imagine that if one, as the birth-giver, bringer of life, looked over and saw their spouse, who did not just have a tiny person explode out of them, snoozing over on the side of the room, one could understandably become a little bit peeved.

After the births of their first two children, Wisconsin mom Samantha Mravik-Miller experienced just how hard it was to get her husband’s attention when she needed help with the baby in the middle of the night, and decided that twice was more than enough.

So when baby number three was on the way, she came to the hospital with the perfect device to make sure her husband, Chad, was awake and ready for duty whenever she needed him:

Worried about the nights in the hospital with your new born & dad sleeping?

Listen, extraordinary times call for extraordinary measures. Plus, when you think about it, what’s the difference, really, between a little nudge to wake someone up versus the gentle touch of a foam dart to the temple? They’re basically the same thing! One’s just a little more fun efficient!

“When I had my son Chase, I lost my voice from being on oxygen for so long. In the middle of the night, I needed help feeding him, but the baby’s cries never woke up Chad,” Samantha told BuzzFeed, “Without having a voice, I couldn’t yell to wake Chad, so I had to throw an empty water bottle. This time, I thought I’d have much better aim with a Nerf gun!”

According to Samantha, Chad managed to stay awake this time so she didn’t even need to use her Mom Gun. Maybe the third time was the charm, maybe he just found he had some newfound motivation to stay alert this time, who’s to say!