As the workday drags on, the minutes going slower than a snail up a tree and the clicking of the keys on the keyboards turning into a semi-soothing white noise, you can’t help but think back to that amazing sammich waiting for you at lunchtime. But a pang of fear strikes your heart ever so silently—what if someone steals it?

Workplace thieves are not as rare as they should be, their long fingers tingling with the craving of ruining someone’s day to fuel their selfish desires. Therefore, it’s always satisfying when these people get their just taste of karma, and in this case, it’s extra salty. A woman decided to share her story on r/PettyRevenge, and I think you may know where this is going.

Don’t forget to leave your thoughts in the comments below, sharing any similar stories you may have. And if you’re craving more after this one, Bored Panda has got another article for you right here. It’s a juicy one as well—pun intended. Now let’s get into it! 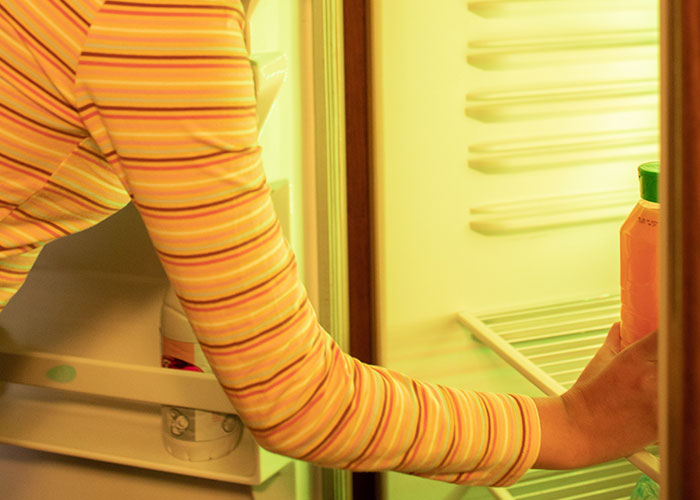 One person shared their wonderfully petty revenge on one such coworker, showing that karma is, well, salty 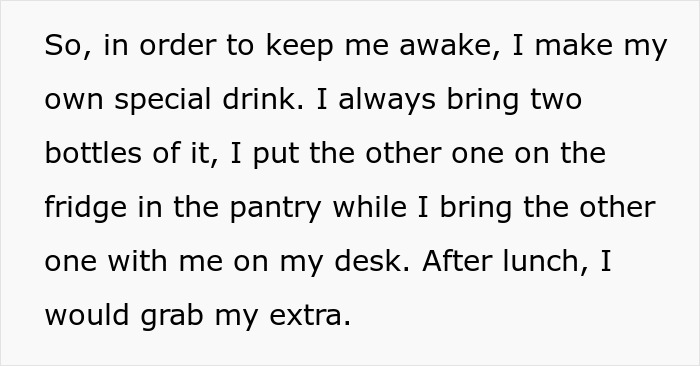 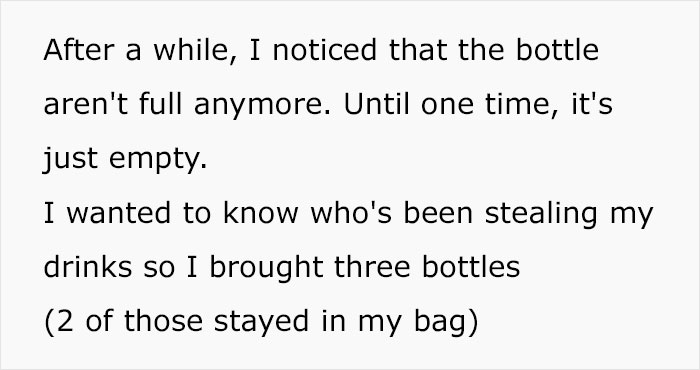 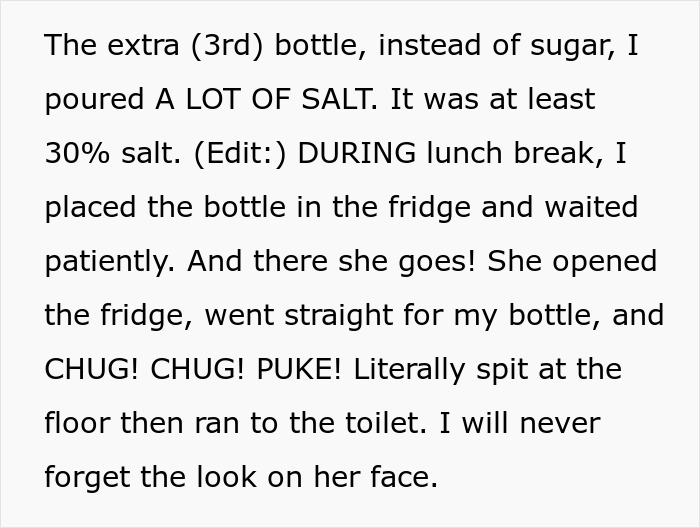 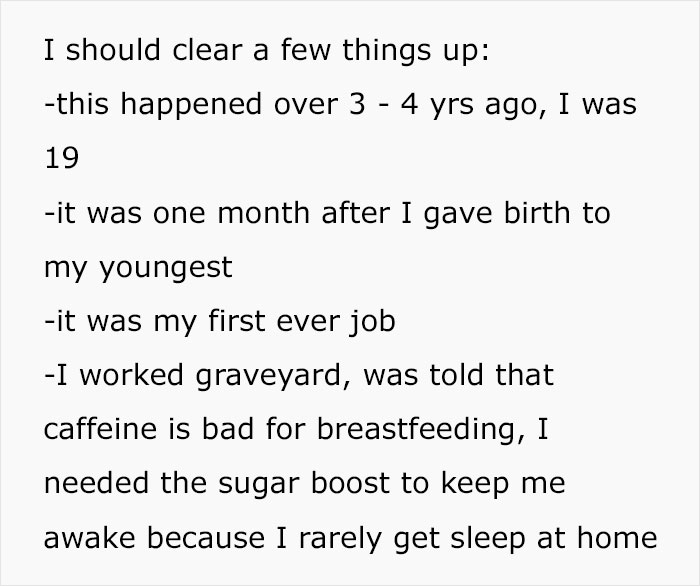 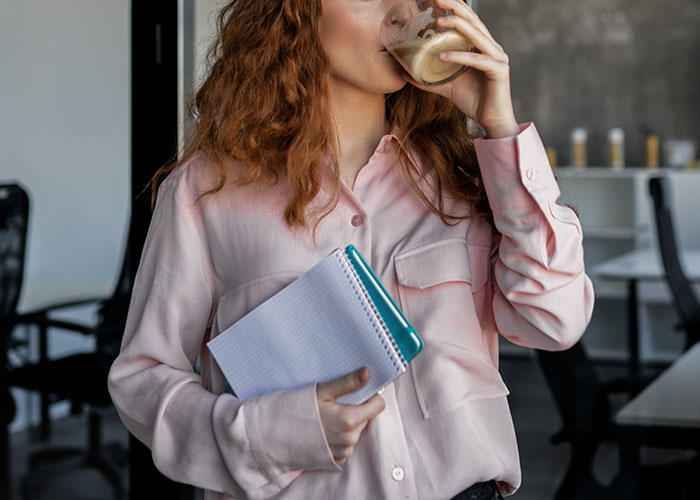 The woman also shared the recipe for her special drink, for all those curious to try it for themselves without having to resort to kleptomania 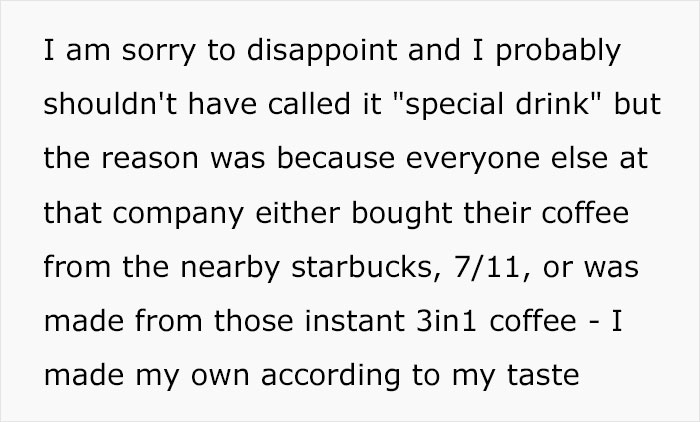 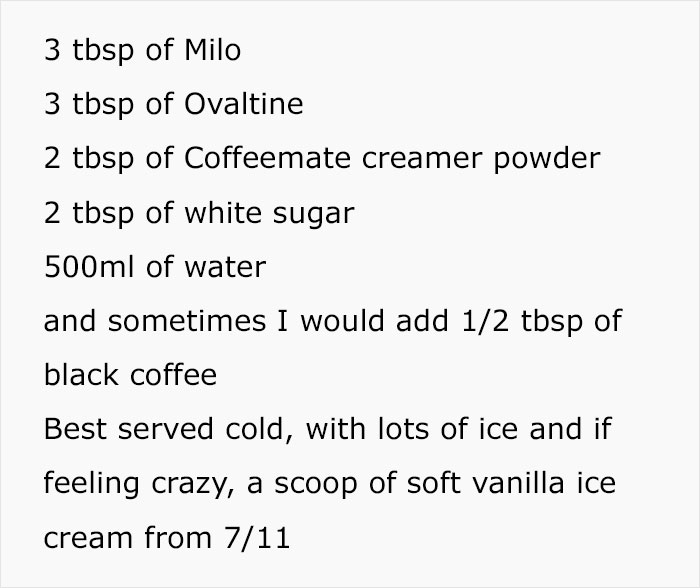 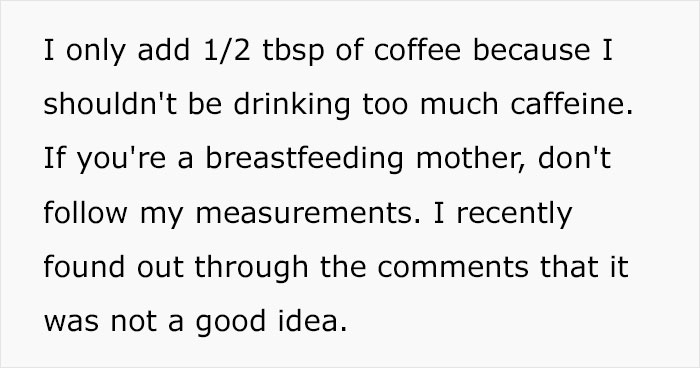 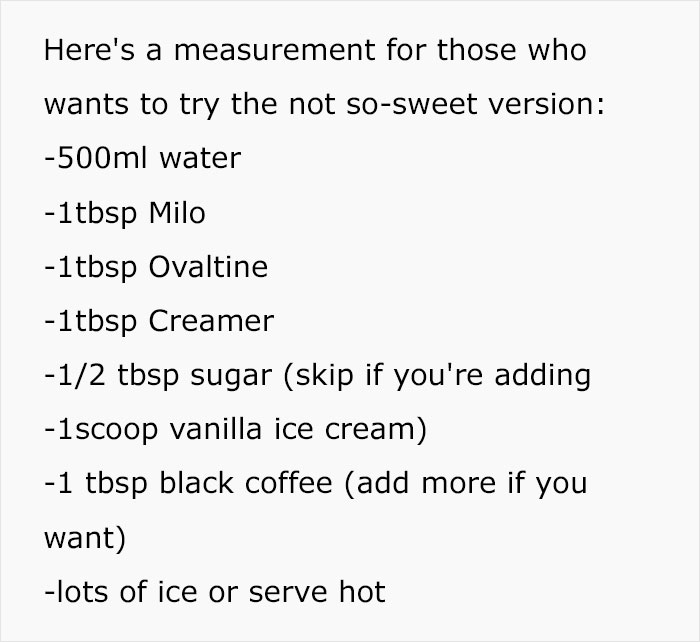 The taste of karma is a delight for those watching justice unfold, but for the troublemaker—it’s nauseating at the very least. A very clear lesson from this story—don’t take things that aren’t yours to take! But why are these stories so commonplace? Are we predisposed to stealing?

As noted in the Diagnostic and Statistical Manual of Mental Disorders, “kleptomania is exceedingly rare, whereas shoplifting is relatively common.” Kleptomania occurs in approximately 0.3–0.6% of the general population, yet there’s something about the work environment that just triggers a surge of wanting to own your coworker’s things.

According to Art Markman, human behavior is focused on doing things that feel right in the short term rather than things that feel right in the long term. The consequences of one’s actions feel more distant compared to the urge to eat or have a tasty drink. Art believes that to decrease small thefts in the workplace, we need to start by making it harder for people to do the wrong thing, but that may be easier said than done.

The key to this puzzle may lie in the motives for stealing in the first place. Brianna Morton shared the insights she gathered from those who’ve been workplace thieves themselves. Some of the reasons for their nefarious actions included seeking revenge on another thieving individual, desperation, and wanting to be a nuisance on purpose.

It’s sad to say, but stealing can become an addiction. According to WebMD, when your brain’s opioid system is unbalanced, you develop strong urges to steal, accompanied by anxiety, arousal, and tension. After stealing, you get a sense of pleasure and relief. Sometimes, you may feel guilt or remorse after the act, but you’re still unable to control the urge.

However, no pleasure should come at the expense of another person, and being stolen from is rarely on anyone’s bucket list. So, all those who are stealing for any other reason than the absolute need for their longevity and survival can get a bunch of salt running down their throat.

We hope that the original poster got their just deserts and they were never stolen from again. And that the lady doing the stealing learned a very valuable lesson. Let us know your thoughts on this situation in the comments below, telling us about any similar stories you may have. I shall see you in the next one! Toodaloo!

The internet gave a round of applause for the woman and shared their own stories. Let us know your thoughts in the comments below! 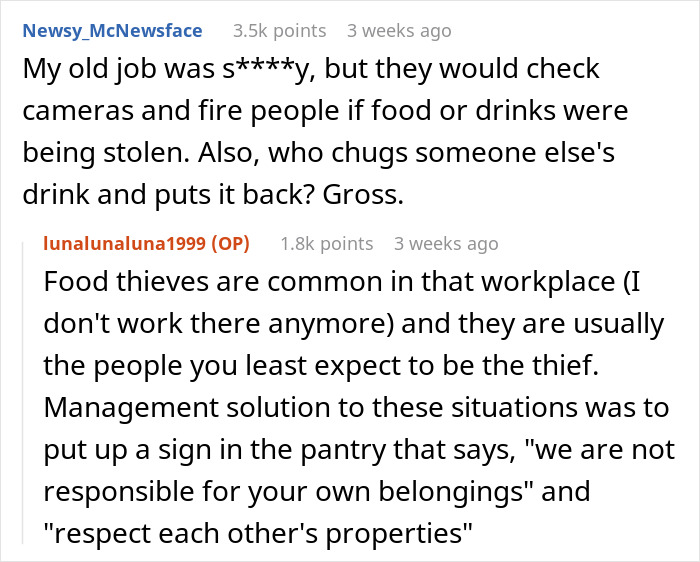 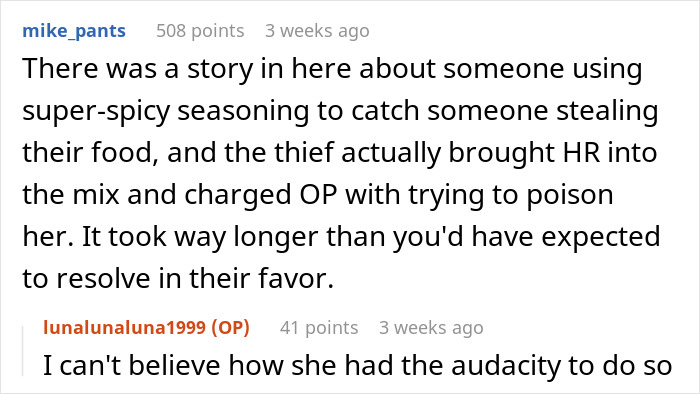 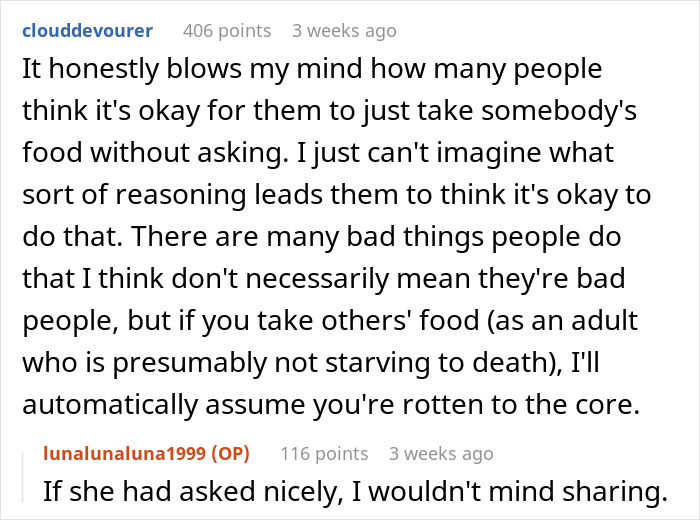 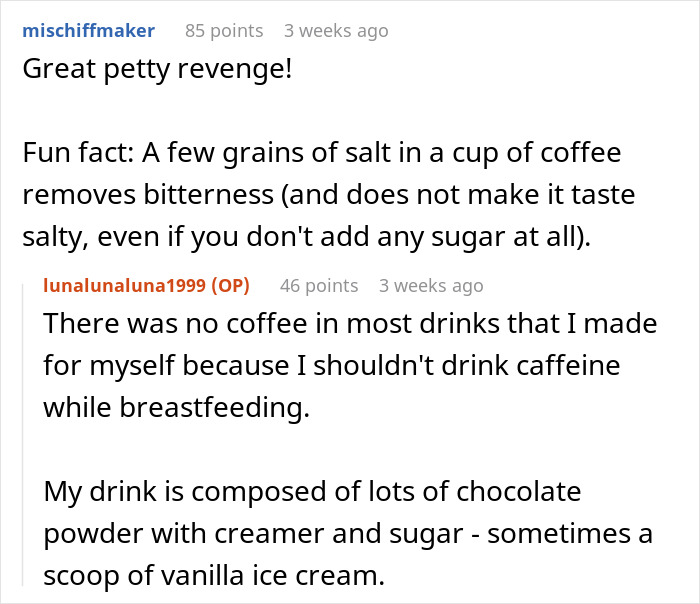 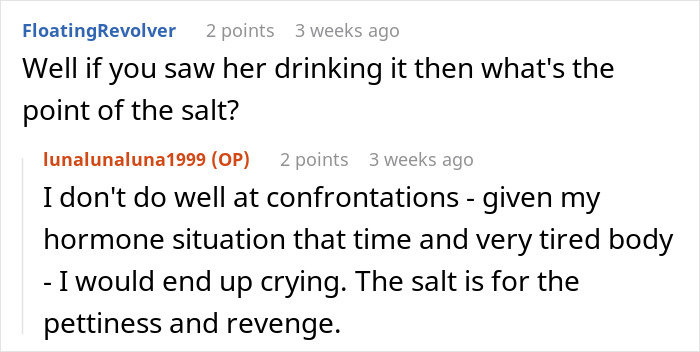 The rest added their own ways of taking revenge upon food and drink thieves, so this might inspire some of you! 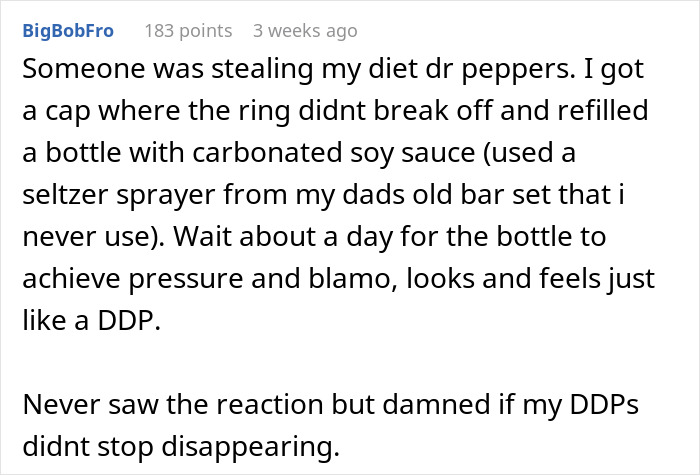