Ohio’s governor Mike DeWine unveiled the design for the state’s new automotive license plate Thursday morning. The design features a wheat field, the Ohio River, cities, and mountains all in front of a sunrise. Overhead, the state shows off its pride in the Wright Brothers as the Wright Flyer pulls a banner saying “Birthplace of Aviation.” No matter that the first flight took place in North Carolina, as Orville and Wilbur Wright were from Dayton, Ohio. But it was only a matter of minutes before someone discovered an error. The Wright Flyer is backwards, and appears to be pushing the banner from the front! You can see the proper orientation of the Wright Flyer in this colorized photo of Wilbur Wright. 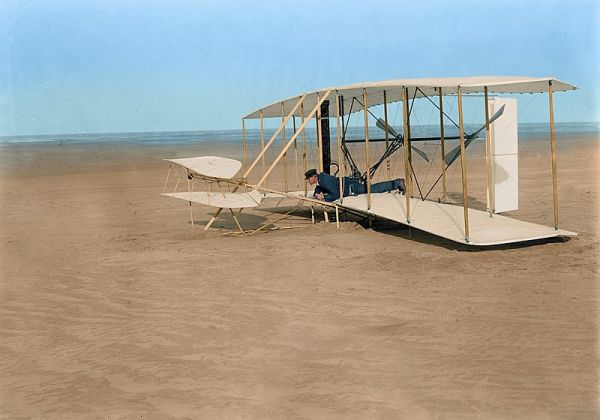 What looks to a casual observer to be the tail of the plane were what the Wrights called “elevators” and were in the front of the plane. Obviously, the plate was designed by someone outside of Ohio, since they surely covered the momentous flight in school.

Colorful and packed with references, the “Sunshine in Ohio” plate was designed by Bureau of Motor Vehicles staff with direction from the governor and First Lady Fran DeWine, who wanted to showcase the state’s agriculture, nature, cities and flight history.

Oops. According to NBC 4, the design had since been corrected- but not before going viral. There’s no word on what will happen to the plates that have already been printed at Ohio’s Lebanon Correctional Facility. If any survive, they will certainly become collector’s items. -via Fark