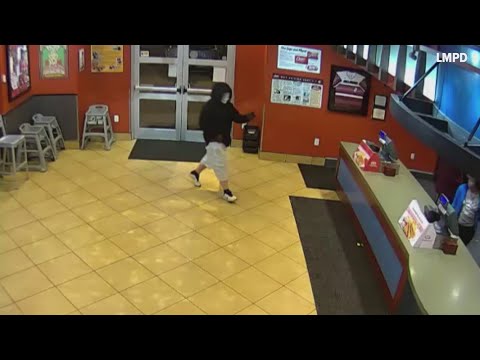 The would-be thief experienced a major failure in the victim selection process when he chose to hold up the wrong Raising Cane’s chicken restaurant in Louisville, Kentucky. Officers Chase and Nicole McKeown from the nearby city of Elizabeth town were there on a date.

NPR describes how they responded when the robber walked up to the cashier and pulled out a gun:

“I saw her hands go up like this and I’m like, ‘Is he doing what I think he’s doing?’ ” Nicole McKeown said at a news conference Tuesday, describing how she and her husband watched the scene play out. “And he’s like, ‘Yeah.’ “

From there, the couple reacted quickly, drawing their weapons and circling the center tables to converge on the would-be robber.

“There was literally no question. We just looked at each other: ‘Is this what’s going on? Let’s go,’ ” said Chase McKeown. He said their police instincts took over, adding, “We just did what we felt like we had to do.”

The McKeowns chased the suspect down and captured him.