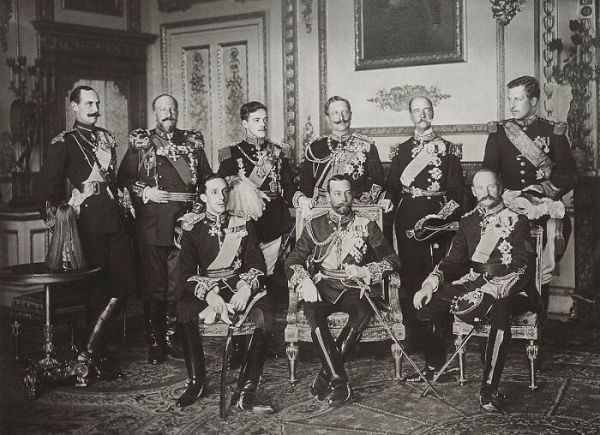 When nine kings get together for a photo opportunity, is it a summit meeting or a family reunion? It’s a family reunion, of course, because kings send representatives to summit meetings. In this case, the occasion was the funeral for Britain’s King Edward VII in May of 1910, to whom each of these monarchs was related. Standing, from left: King Haakon VII of Norway, Tsar Ferdinand of Bulgaria, King Manuel II of Portugal, Kaiser Wilhelm II of the German Empire, King George I of Greece and King Albert I of Belgium. Seated, from left, King Alfonso XIII of Spain, King-Emperor George V of the United Kingdom and King Frederick VIII of Denmark. Many of them were first cousins of George V as his grandmother, Queen Victoria, married off most of her ten children to royalty across Europe, although some kings were only related to the British monarchy by marriage.

Tsar Nicholas II was also George’s first cousin, but did not attend the funeral. Russia was represented at the funeral by the Tsar’s brother, Grand Duke Michael Alexandrovich, also a cousin, and their mother Dowager Empress Maria Feodorovna of Russia. However, you may recall another occasion we saw the British King and the Russian Tsar together. Only a few years after this picture was taken, most of Europe was at war, empires were shattered, and monarchies overthrown. Such a photo will never be possible again. That’s not a bad thing. -via reddit