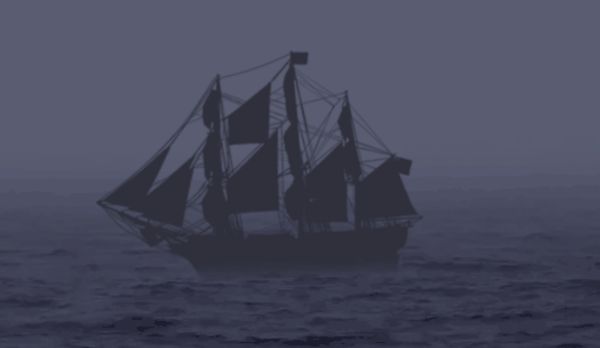 In the 18th century, Britain shipped around 50,000 prison inmates to the American colonies, where they paid their debt to society through hard labor. James Dalton was sent multiple times for theft, and made multiple attempts to escape. In 1720, he succeeded in leading a mutiny aboard the ship Honour, on which the prisoners greatly outnumbered the crew.

Oceanic crossings were prone to severe gusts. “One Day when we were at Sea,” Dalton would later write, “a Gale of Wind arose that blew very hard, and carried away our Main-Top-Mast.” Twelve of the men—including Dalton—agreed to help with the repairs on deck and had their chains removed. The first mate made Dalton steward of the prisoners. Dalton was keenly aware of the provisions brought on board by a fellow prisoner, Hescot: “about fifty Pound of Bisket, two Caggs of Geneva [gin], a Cheese and some Butter.” Dalton and his prisoner buddies proceeded to take the food and liquor for themselves. Hescot complained to Captain Langley, who threatened to whip all of the prisoners to find the culprit. But before he could do so, Dalton gave the prearranged signal. He and 14 other felons seized the ship’s weapons, immobilized the 12 crew members, and took control of the vessel.

That was far from the end of Dalton’s story. What was the punishment for leading a mutiny on a prisoner’s ship? Exile to America. Read about the colorful career of James Dalton, who couldn’t give up his life of crime, but couldn’t bear forced labor in the colonies, at Damn Interesting.