As a way of coping with a particularly intense breakup at the age of 18, Heather Benjamin turned to illustration. Creating darkly personal diaristic drawings that chronicled her journey through heartbreak, and all the aftershocks that go along with it. As notebooks and notebooks of these images began to stack up she decided to compile them into her first zine, which she titled “Sad People Sex.” Containing photocopied black-and-white line drawings of people crying and fucking, Benjamin’s zine describes the combination of these two activities as a poignant and accurate metaphor for her life at the time. From that point forward, the intimate style she developed has carried on in all her work, expressed in zines, books, and larger format illustrations and paintings. 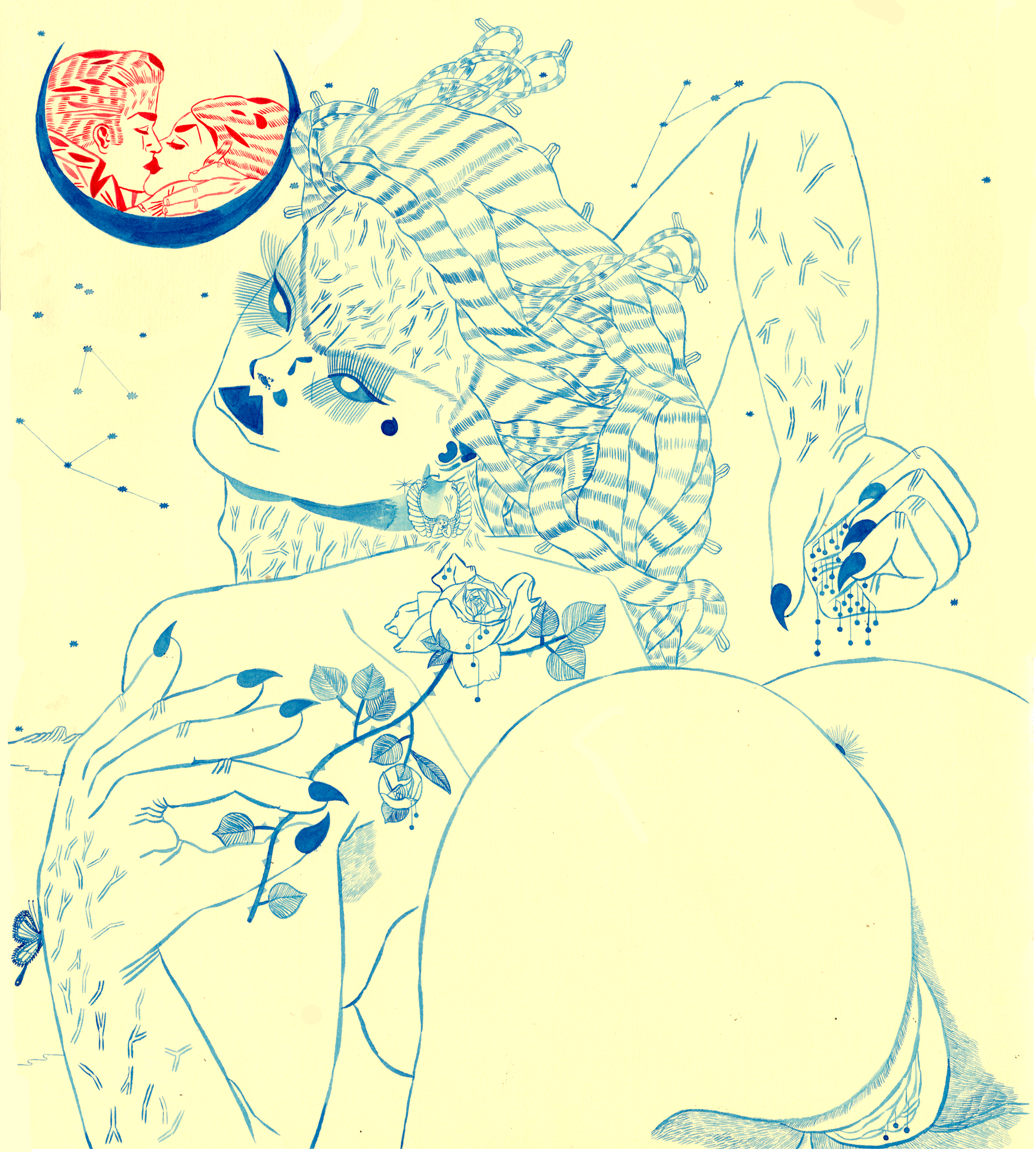 A key part of Benjamin’s artistic practice is the expression of an honest lived experience, which plays a big part in her dark, absurd, and violently erotic depictions of female sexuality. Her portrayals of womanhood are in no way meant to apply as blanket statements for all those identifying as female, but instead are more autobiographical. Though the sweet spot where her work strikes a relatable chord is always affirming, ultimately she uses illustration as a tool, helping her articulate the more complex parts of herself. “My reasoning for depicting women the way I do, across a broad spectrum of feelings and states of being and levels of self-acceptance or sexiness or abjection, always has to do with the way I personally feel in my own skin and my own mind as a woman,” Benjamin tells Creators. “Even though my feelings towards myself all fluctuate on a daily basis, overall I constantly feel a push and pull between feeling beautiful and feeling ugly, loving myself and hating myself, feeling at peace and feeling anxious, feeling traumatized and feeling enlightened, feeling sexy and zen and feeling like a nasty animal—sometimes a good thing, sometimes a bad thing. So my work is inherently about all these juxtapositions, trying to reckon with them.” 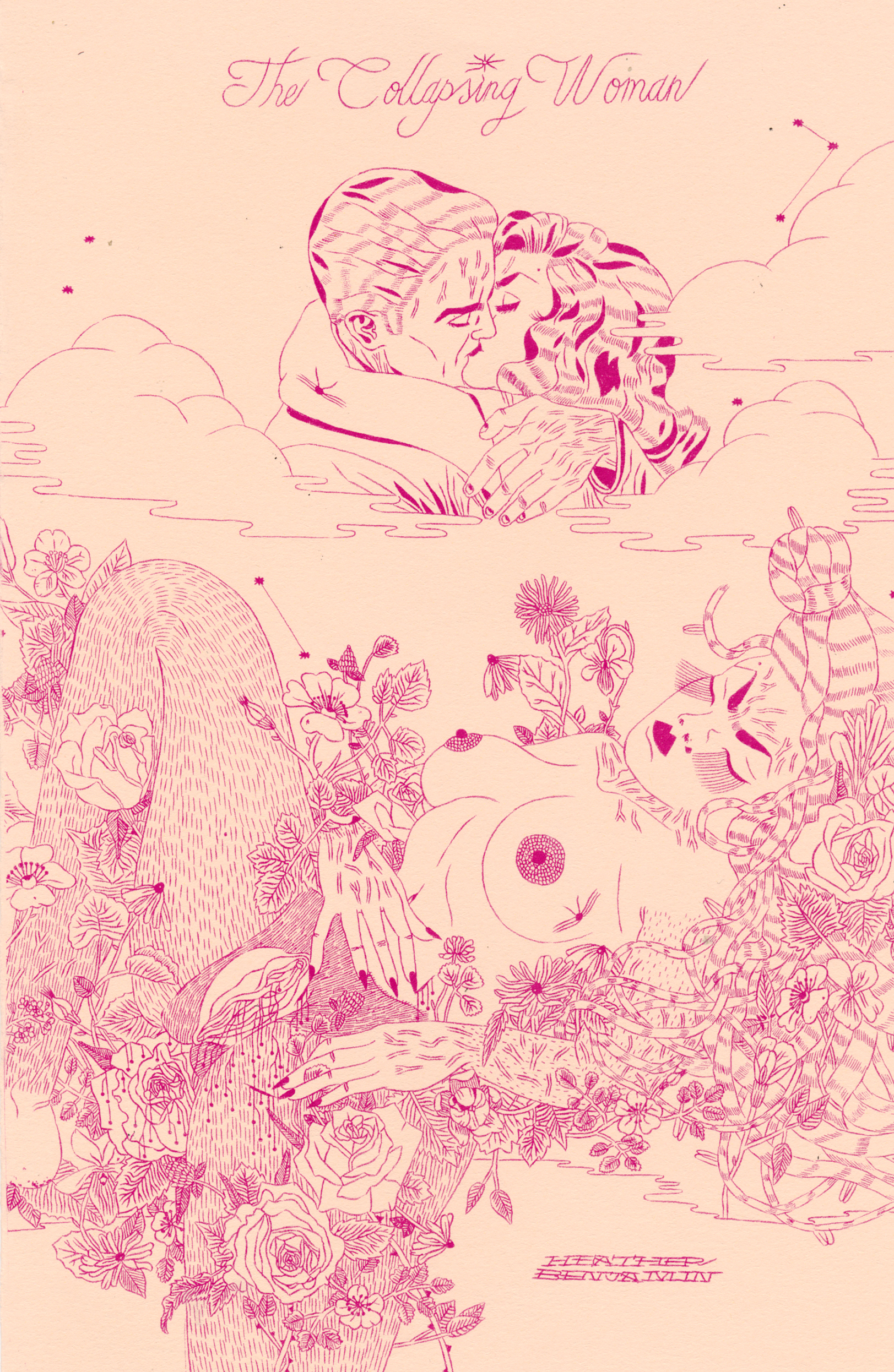 Cover of “The Collapsing Woman” zine

Benjamin’s drawings are chaotic yet pointed, a melee of primary colours and harsh lines combine to create specific character sketches. Though visually expressed with some wild abandon, the messages of each are clear, expressing moments of pain, humor, and twisted pleasure. Aesthetically these images seem to have a strong connection to the occult, as the women they focus on appear to have magical or witchlike endowments. This link between Benjamin’s work and aspects of the supernatural is an element left over from her beginnings as an artist, when the look and subversive message of matters of the mystic was more of a direct influence. “I don’t find myself doing the research that I used to, across the board [the occult] doesn’t capture my attention the way it once did. If something comes up that sparks my interest I will investigate, but I don’t use the symbology the way that I used to when I was a teenager, which was gratuitously,” she explains. 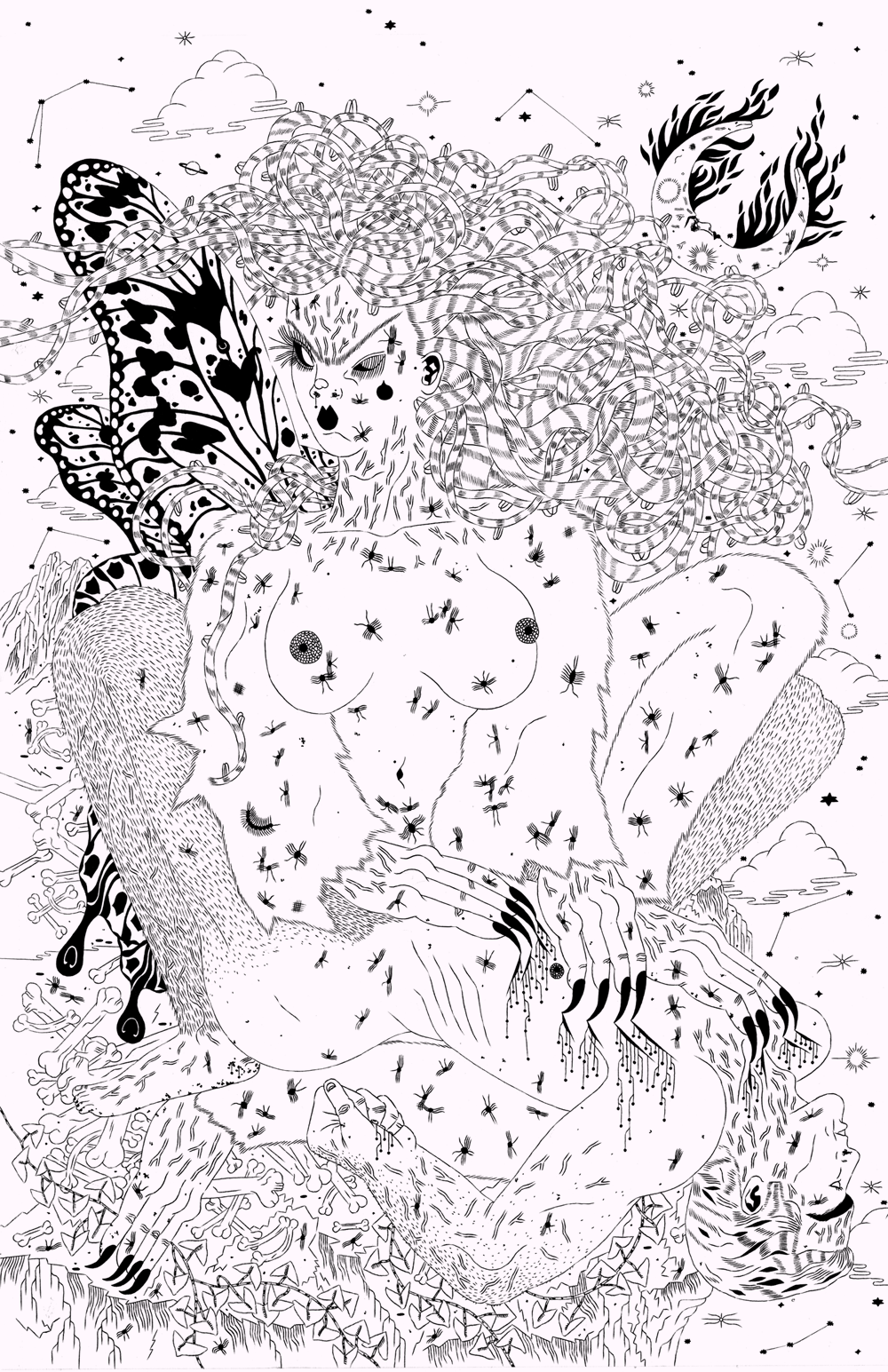 As Benjamin has matured as an artist, her leanings towards allusions in her work have made way for complete frankness. Expressing basic fundamental aspects of humanity, like sex and death, with absolute candor is not only a way of voicing her experiences but also a form of activism. “I think it’s so important to put the more grotesque, or at least less picturesque aspects of sex and sexuality on display, and to open more of a dialogue about those things without feeling taboo,” she says. Benjamin’s work is in response to a world where popular media often whitewashes sexuality, depicting it in a stainless unattainable way that when compared with real life experiences promote shame and guilt.

“Women especially are fed an extreme formula that we’re meant to subscribe to in order to feel like we are sexually desirable beings, when there are so many other more beautiful, realistic and varied permutations. It’s important because it will make our intimate relationships stronger and more honest if we can be open about the way things really are instead of being worried about taboos,” says Benjamin. “And it will make us feel less lonely within ourselves when we are experiencing the less digestible aspects of our bodies and sexuality and feel like we’re going it alone, something’s wrong with us, we’re different, people would think we’re gross or unattractive. It really goes on and on, I feel like I can’t overstate how important I think it is to really air this stuff out.” Folklore tells us the job of the witch is to undermine social and religious order by way of their own personal magic—Benjamin does much the same thing using the sorcerer-like creatures in her illustrations as a conduit. Going forward, she will continue her beautiful disruptions of forced convention in different, larger format mediums with a stronger focus on painting and unplanned ink sketches. 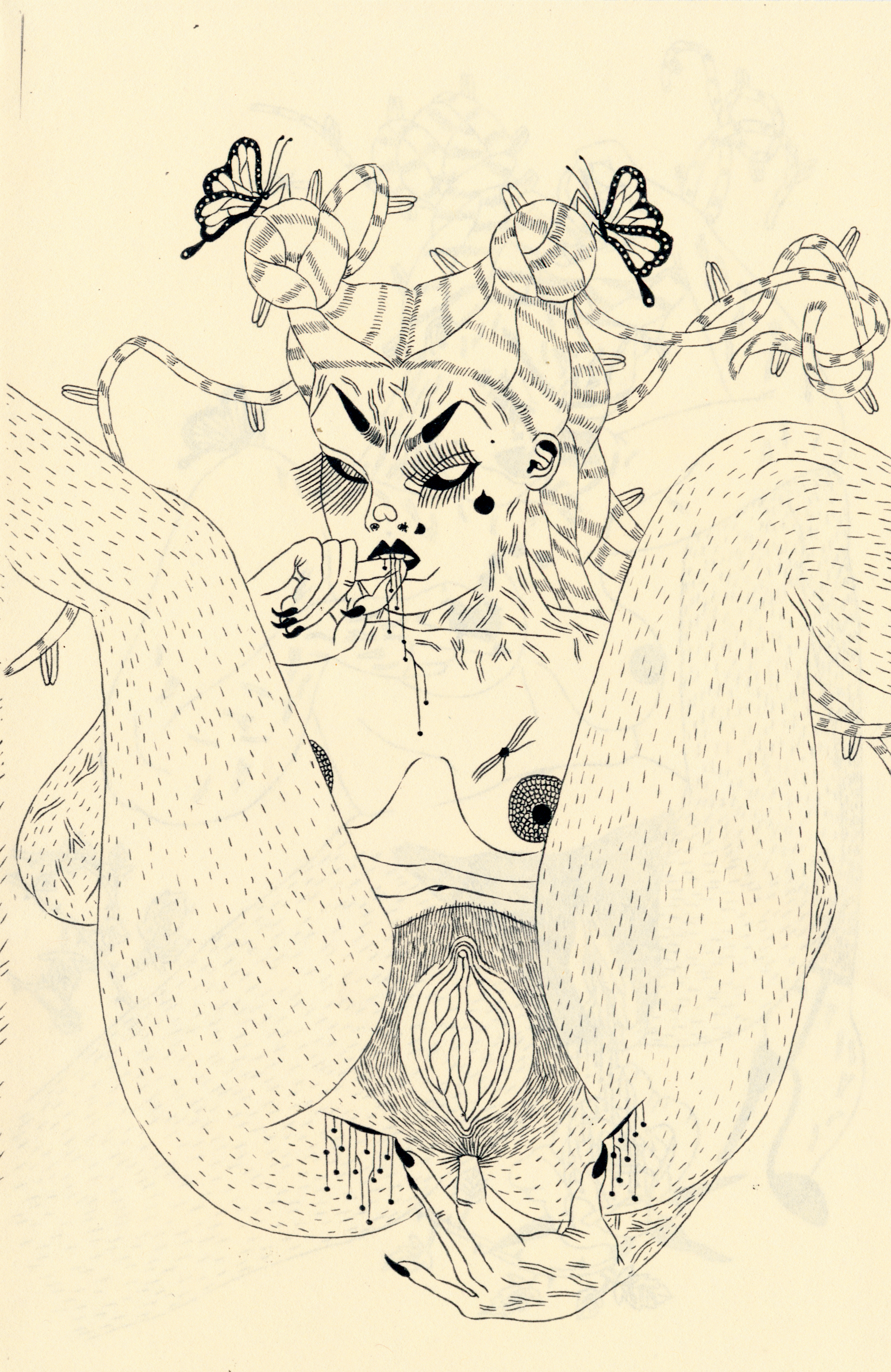 Heather Benjamin’s work is available for purchase here, and will be shown this fall at MOMA PS1 during the New York Art Book Fair.

Magical Drawings Put Women in Conversation With Their Demons