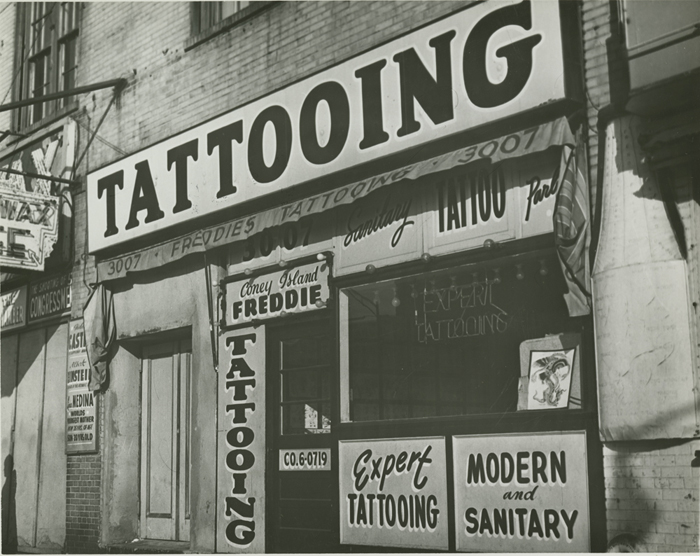 In 1961, spurred by the threat of Hepatitis C, New York City passed a law that made tattooing illegal. This ban would remain in effect for the next 36 years, until 1997. It created a burgeoning underground tattoo culture and distinctive New York City style that yielded NYC its rightful designation as the birthplace of the modern tattoo. An emboldened, outsider narrative of renegade ink artists is detailed in Tattooed New York, a new exhibit at the New York Historical Society that explores the history of tattoos in New York, from the Iroquois to the thriving state of contemporary tattoo culture. 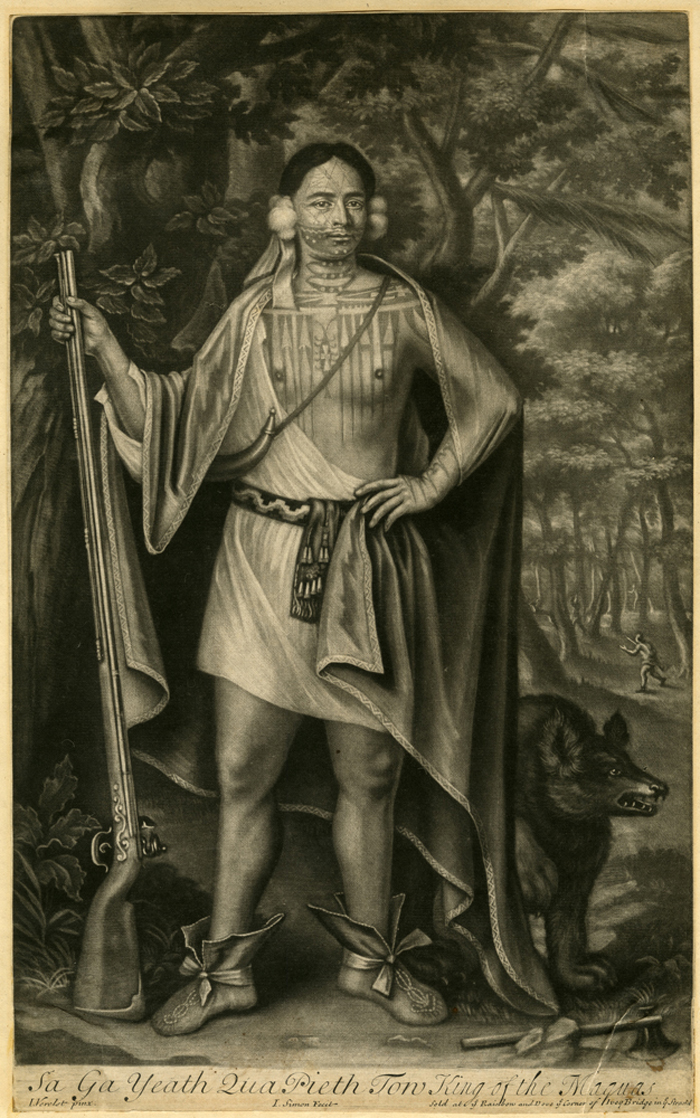 Beginning with the dawn of tattoos, the carefully curated exhibition traces their lineage from the Haudenosaunee tribe in New York who used tattoos as marks of protection and for their perceived healing powers, to contemporary adornment of tattoos as symbols of empowerment and commemoration, with portraits of breast cancer survivors’ chest tattoos and 9/11 survivors’ “never forget” emblems. 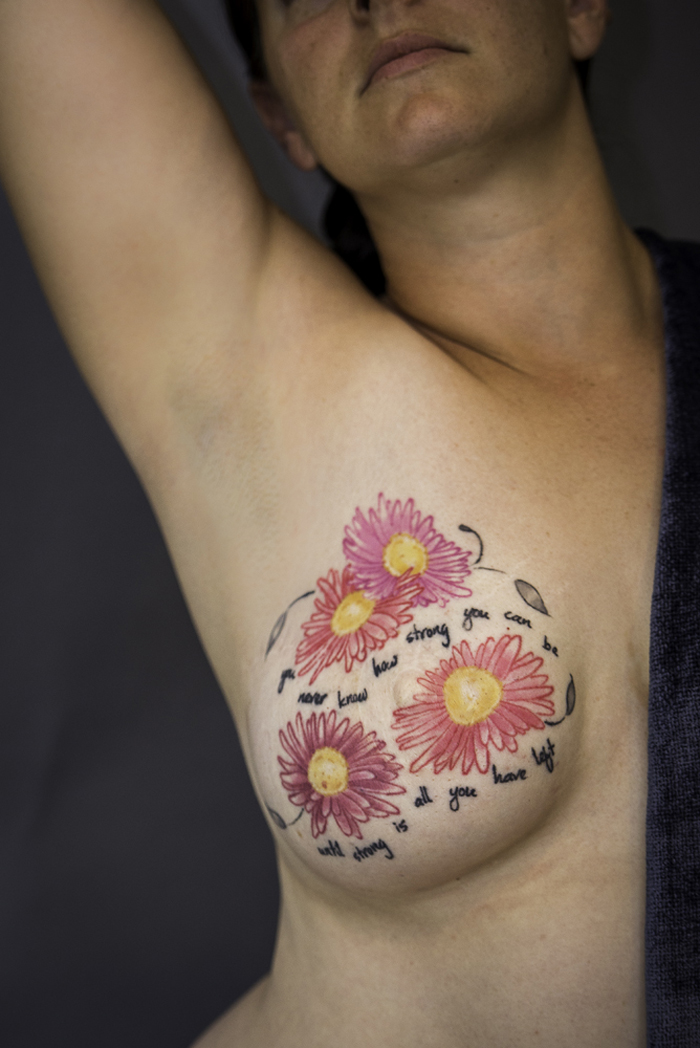 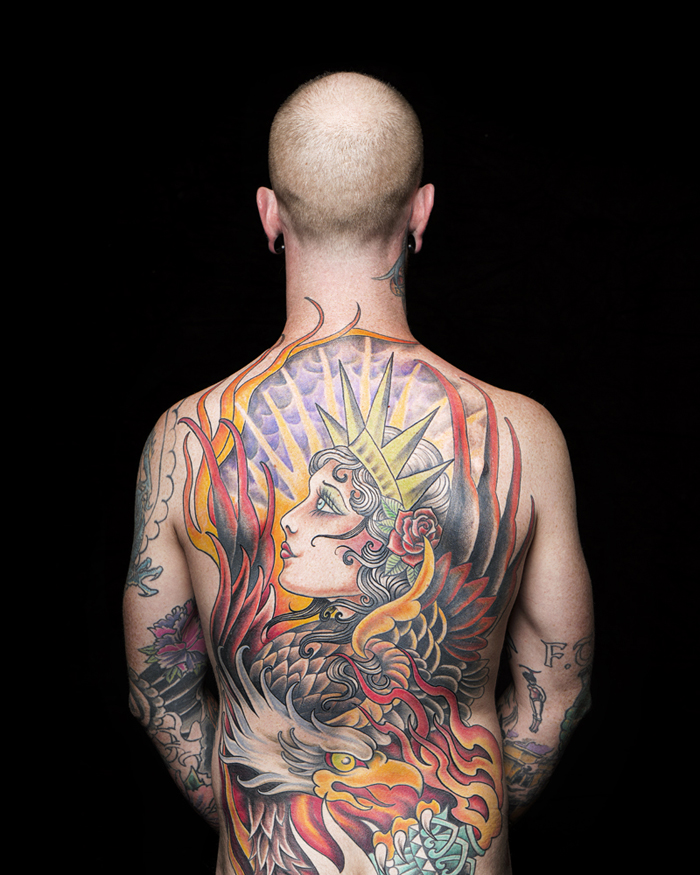 Each section stands alone in its curation and cohesive storyline, yet all are intricately woven into a multi-century saga. Moving from tribal tattoos, the exhibition follows their popularization amongst sailors who first saw them on Native Americans and took to representing their own travels with symbols such as the sparrow for distance (one sparrow was equal to 5,000 miles, two to 10,000, and so forth) or anchors for stability. It highlights women who capitalized off the culture by realizing it as a means of independence, tattooing their entire bodies and joining sideshows to make a living and also those women of high society whose tattoos remained hidden. 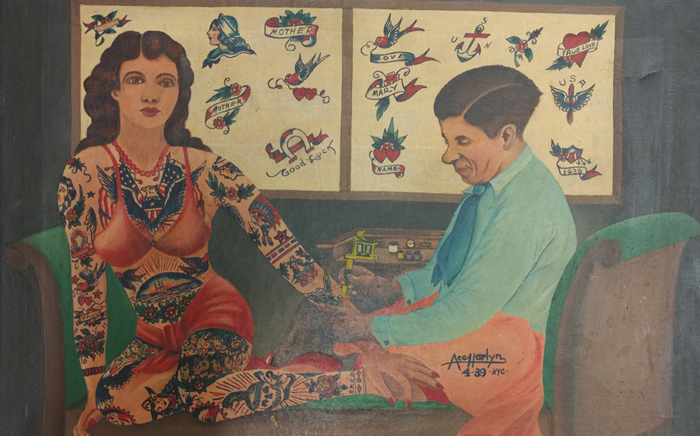 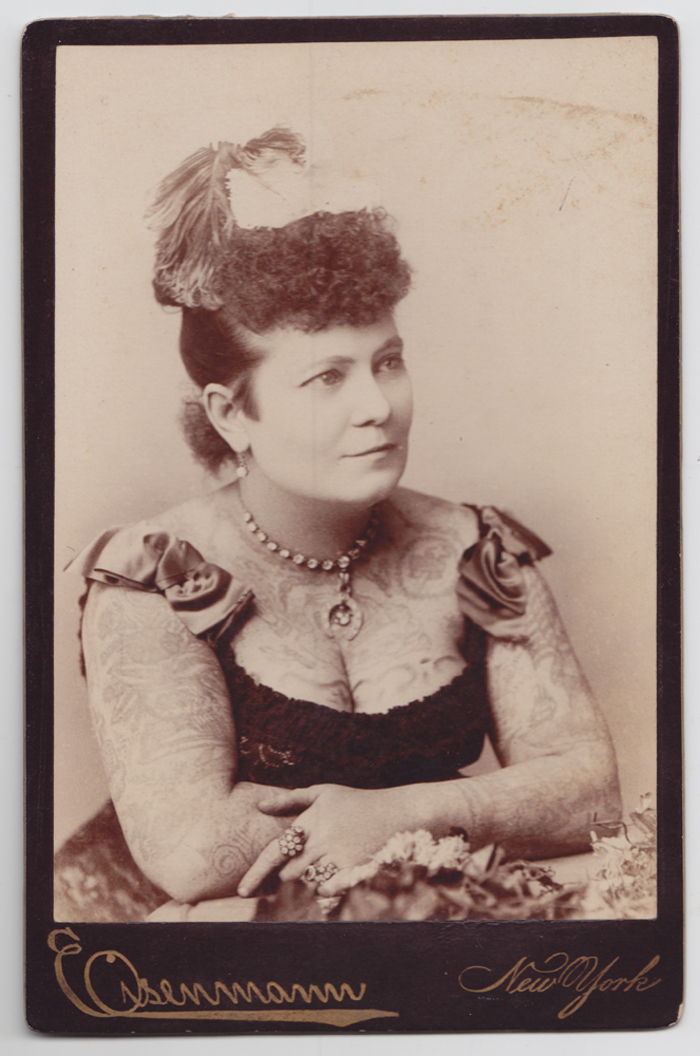 From Theodore Roosevelt to Dorothy Parker, curator Cristian Panaite, sought to portray that New Yorkers have always been obsessed with tattoos. He tells The Creators Project about New York City’s influence on tattoo culture, saying, “Artists from all over the world come here to apprentice or practice tattooing, and New York tattoo artists travel the world bringing new visual vocabularies back to the city; it’s an ongoing cross-pollination.” He quotes Mike Rubendall, a tattoo artist from Kings Avenue Tattoo: “New York makes it; the rest of the world takes it.” 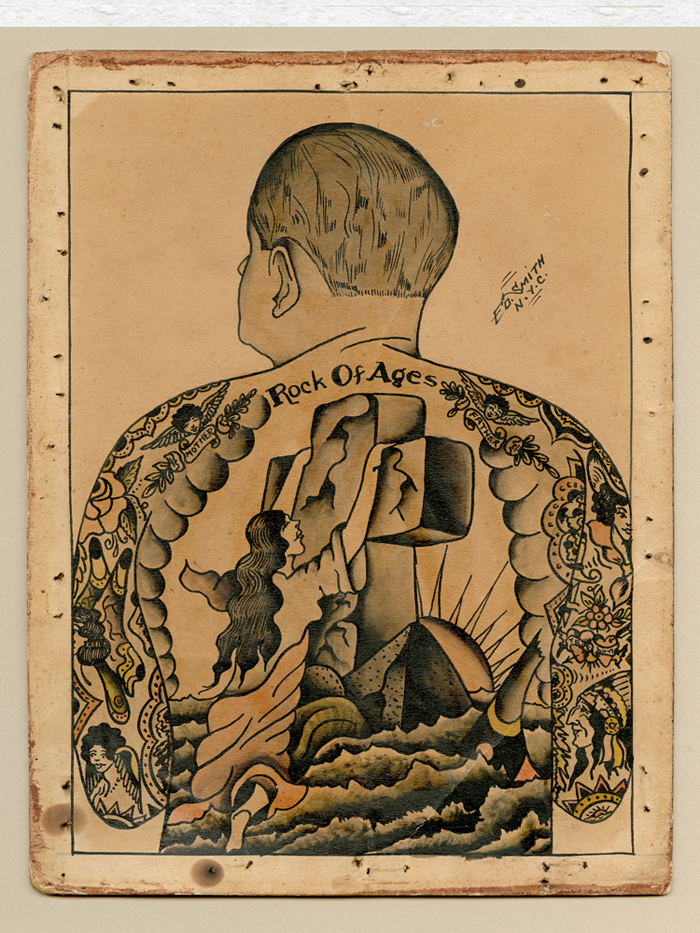 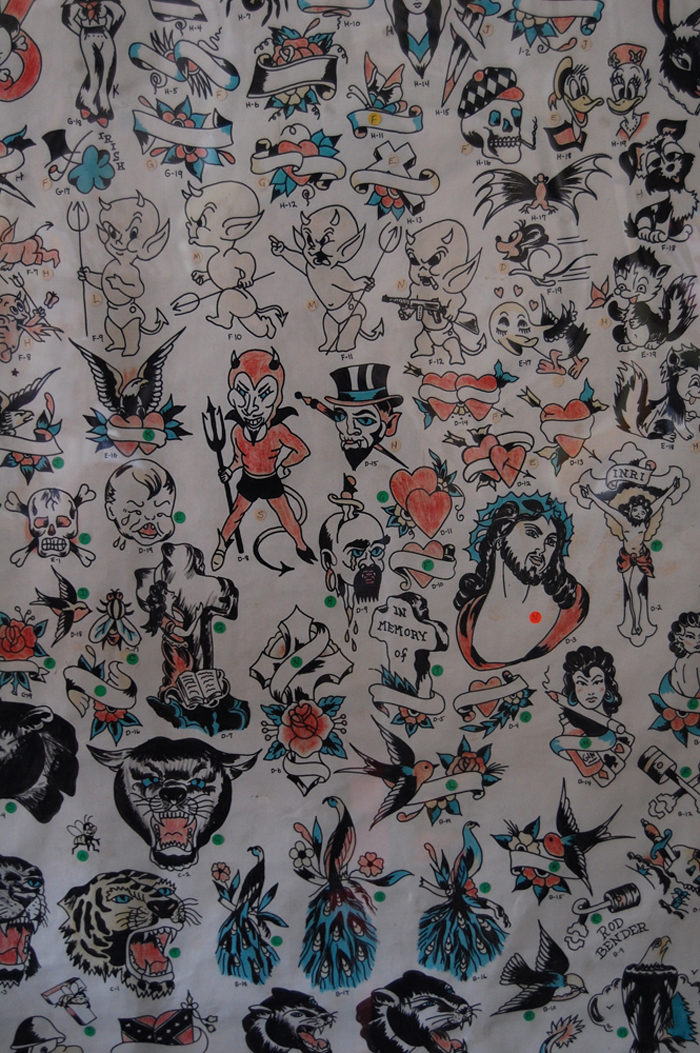 The pioneering drive behind NYC’s influence was fueled by years of underground art-making. Panaite highlights the tattoo ban as one of his favorite parts of the exhibition: “What I personally found fascinating about the ban years are the stories about illegal tattoo studios operating out of private apartments, which were perceived as sacred safe spaces for creating art. New Yorkers from all walks of life—including cops, businessmen, even rival biker gang members—would meet and interact with one another within the confines of these studios, and everyone would have to follow strict rules set by the artists.” In the spirit of Prohibition, New Yorkers found another way to keep tattoo culture alive. 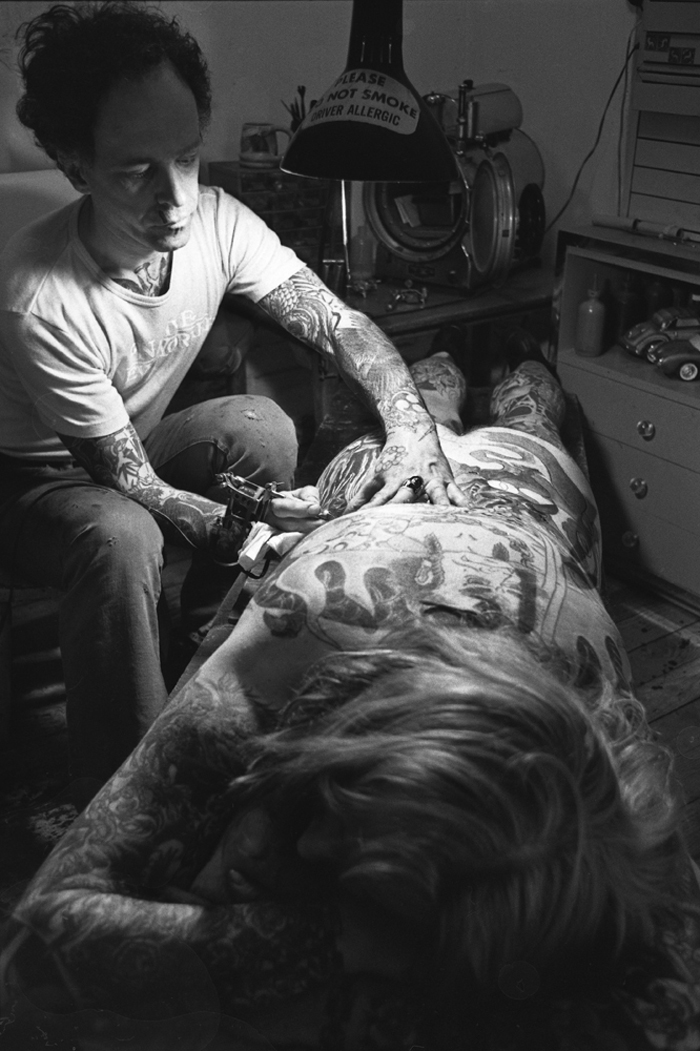 From that pluck and perseverance, a unique style was born: a distinctly “New York” tattoo, with bold colors, thick black outlines, and a simplicity in subject matter. “Today,” Panaite says, “many artists consider New York style to be a global style, because of all its influences from around the world, and vice versa.” Tattooed New York is an immersive history experience with vivid imagery and a host of outlaw sentiment that memorializes those personal visual statements every three in ten Americans proudly (or not so proudly) wear. 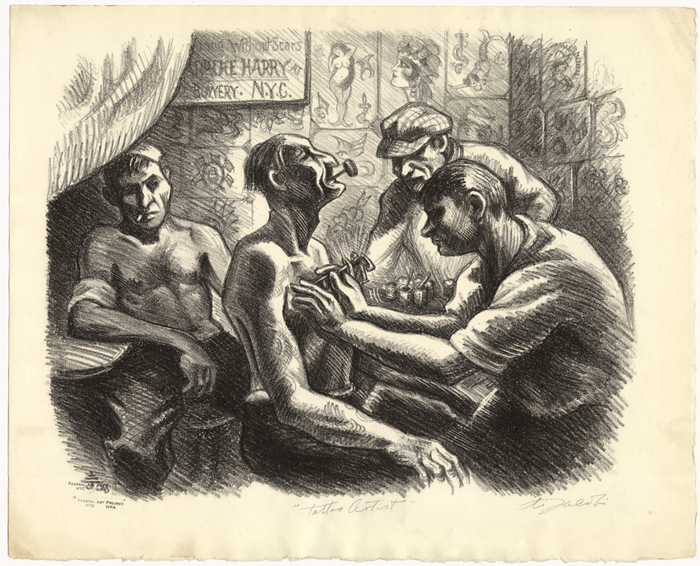 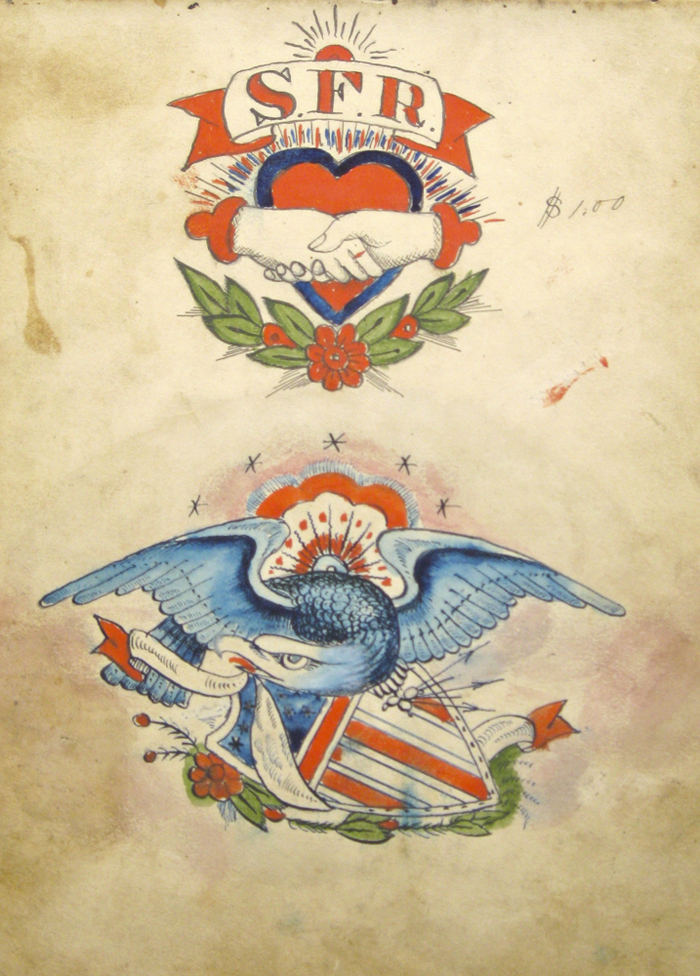 Tattoed New York is on display at the New York Historical Society from Friday, February 3rd through April 30th, 2017. For more information visit their website.

Trust Tattoos? Here’s What Happened When an Artist Had Total Control

A South Korean Artist Is Breaking Taboos with Flower Tattoos