Monica Khemsurov, co-founder of Sight Unseen and Tetra, has curated a shoppable exhibition featuring 12 mini collections from 10 different people. Khemsurov had the idea to ask fellow object enthusiasts – ones who are known to collect certain items at flea markets, shops, or eBay – to participate and the OCC Market (which stands for Obsessive Compulsive Collections) came alive. Each of the collections includes eight or more items of the same genre, which are now available at Coming Soon’s project space, the Plyroom, in NYC. 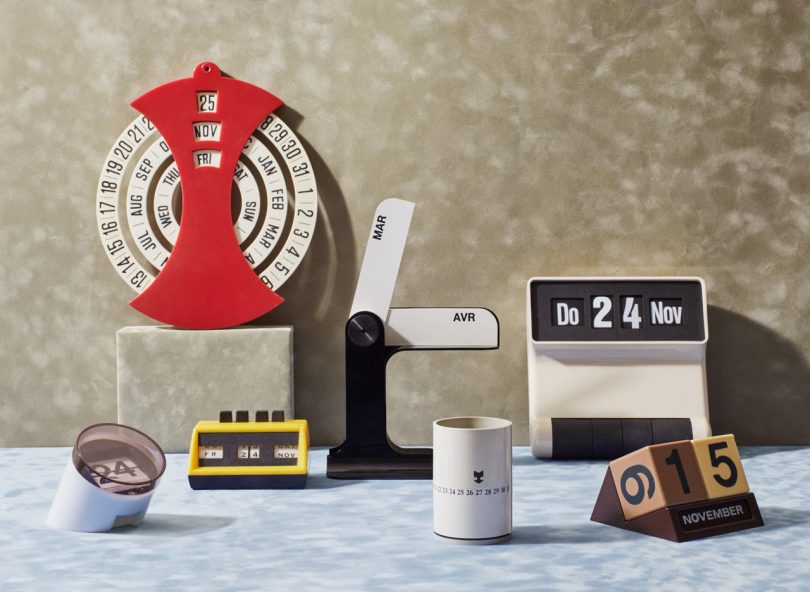 PERPETUAL CALENDARS from Joseph Magliaro, designer and former co-founder of Table of Contents

Marshall McLuhan believed that outmoded technologies often return as works of art. In that vein, I like to think of the perpetual desk calendar — a staple of pre-digital 20th century office life obviated by the smartphone and personal computer — as a form ripe for recuperation as an enabler of symbolic rites. The perpetual calendar offers no practical benefit today, functioning instead as an instance of memento mori. The only reason to turn its dials or click its buttons is to remind us that another day has passed, and that to take advantage of our openness to the world, we shouldn’t feel paralyzed by angst, but rather called to action, obligated to engage as many possibilities as we can in the time that remains. 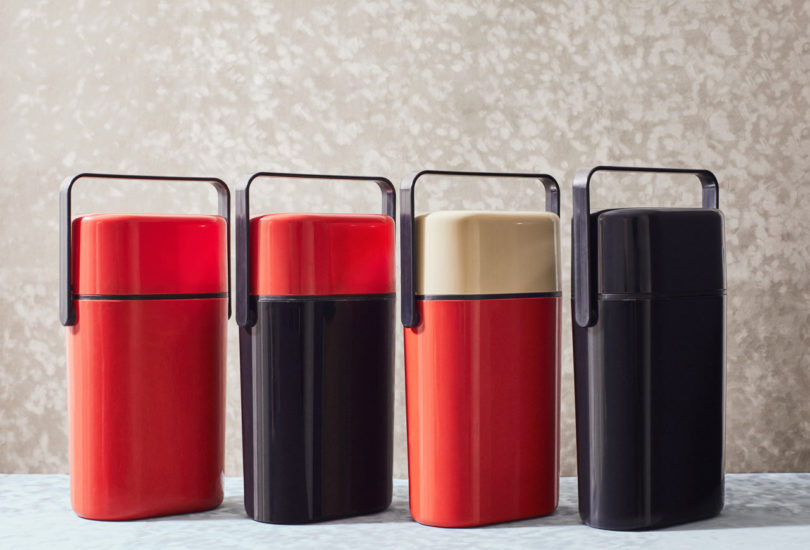 The first time we saw the Travel Wine Cooler — designed in 1980 by Australian designer Richard Carlson for Décor, and in MoMA’s permanent collection — was a recent purchase a friend, Esteban Arboleda, made at a local vintage store while we were staying at his house in Shelter Island. We became obsessed with it and have tried to buy out the market of them to get the best colors. We ended up amassing quite a few of them. Some have a sleeve that you can freeze that keeps the wine cool, but you might just want that particular color. We also found one with the original box, which has an amazing image of the cooler on it. 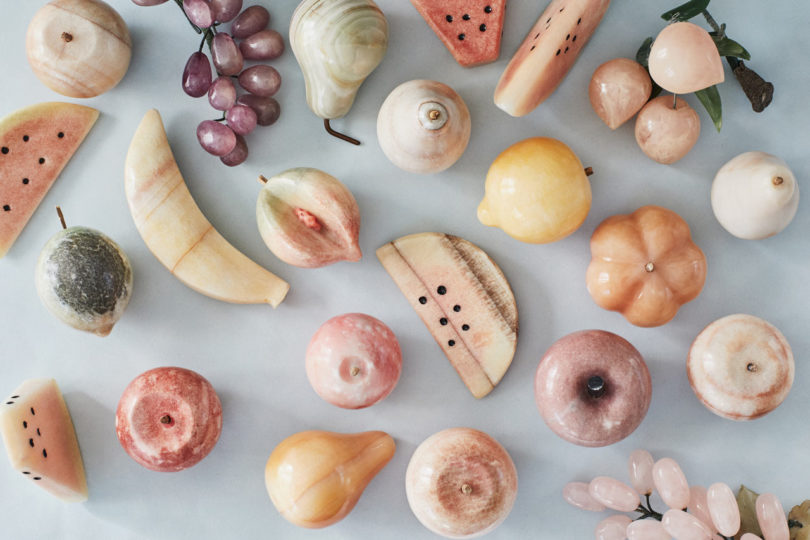 STONE FRUITS from Keren Richter, co-founder of The White Arrow

I’ve always found fake foods fun, be they wooden kid’s toys, plastic display-case sushi, or oversized Oldenburg Burgers. My ‘stone fruit’ collection playfully elevates something kitschy into the realm of the Renaissance still life. The monochromatic pairings explore the subtle color and textural variations between marble and alabaster, while looking pretty, too. 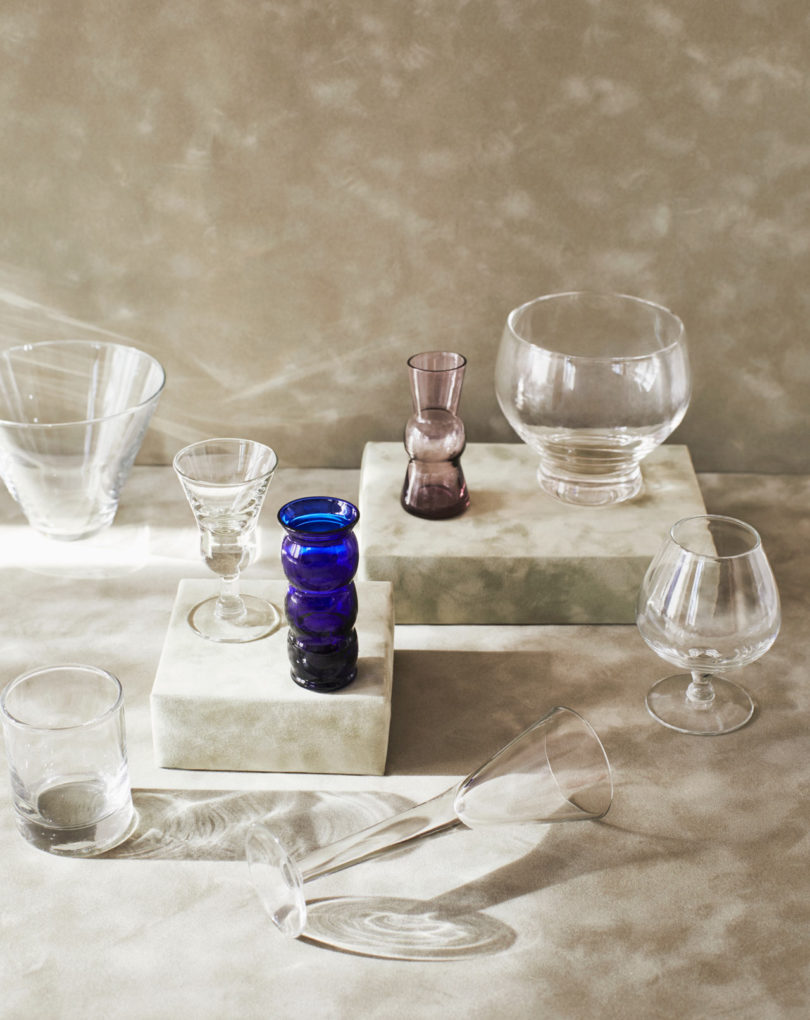 Digestif glasses have come into my world of possessions because I love small-scale home objects – especially glass or ceramic ones. I enjoy using these small vessels for a variety of things, like sipping espresso in the morning, or placing fresh herbs in the kitchen, or actually enjoying a digestif after a meal. 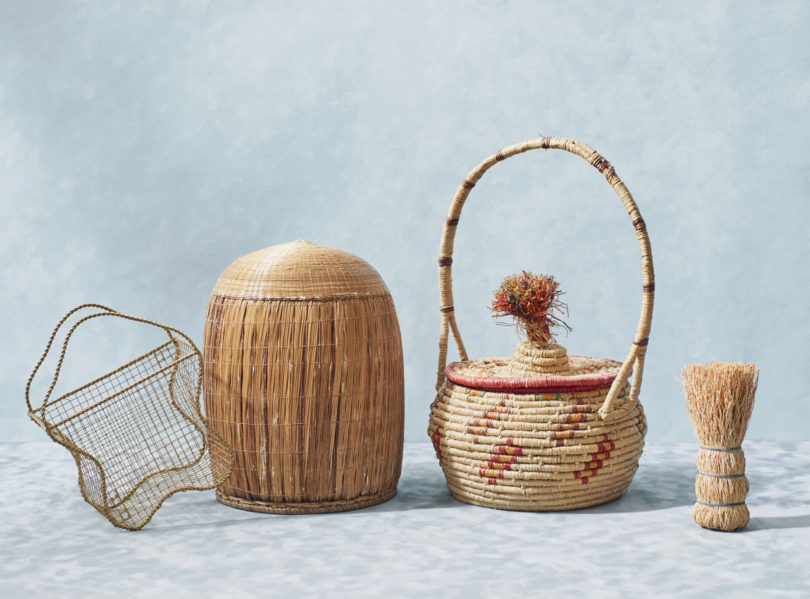 Basket-themed objects have always attracted me, since I was tiny. This probably has something to do with always seeing them around at home, and with their ubiquity in Mallorca, where I grew up aside from New York. As I’ve gotten older, I’ve grown not only an aesthetic appreciation for how these materials look, but also for the care put into how they’re made. Something about basket textures are just visually calming. 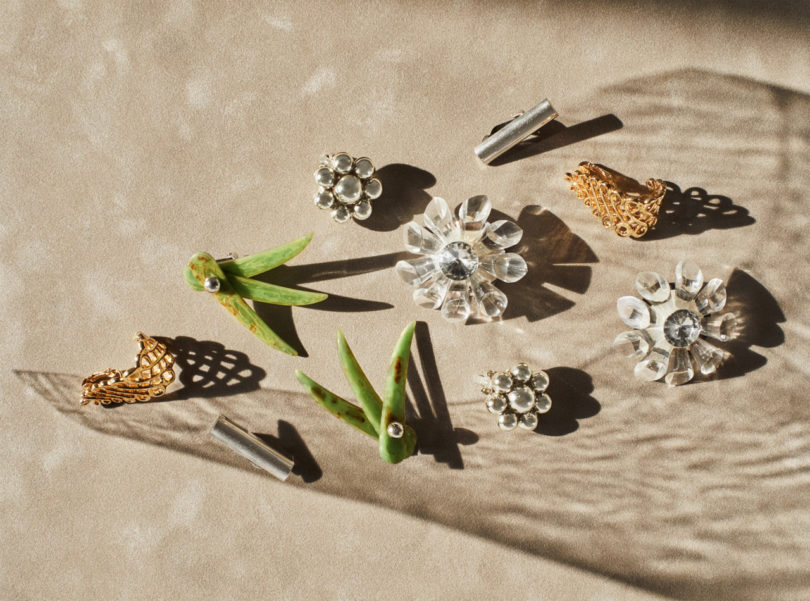 CLIP-ON EARRINGS from Mary Ping, founder of Slow and Steady Wins the Race

We amassed a collection of various vintage clip on earrings sourced from eBay, Etsy, and thrift shops. We went in search of timeless, sculptural, architectural, and unusual takes on the clip-on, whether it be a 1960s Space Age Lucite starburst shape, or modernist silver-tone half-cylindrical bars. Our favorites are the 1950s pea-soup colored earrings with a pivot point connecting 3 blade-shaped pieces of Bakelite that you can wear closed or spread open. We haven’t seen anything quite like them, but we wish we designed them ourselves. 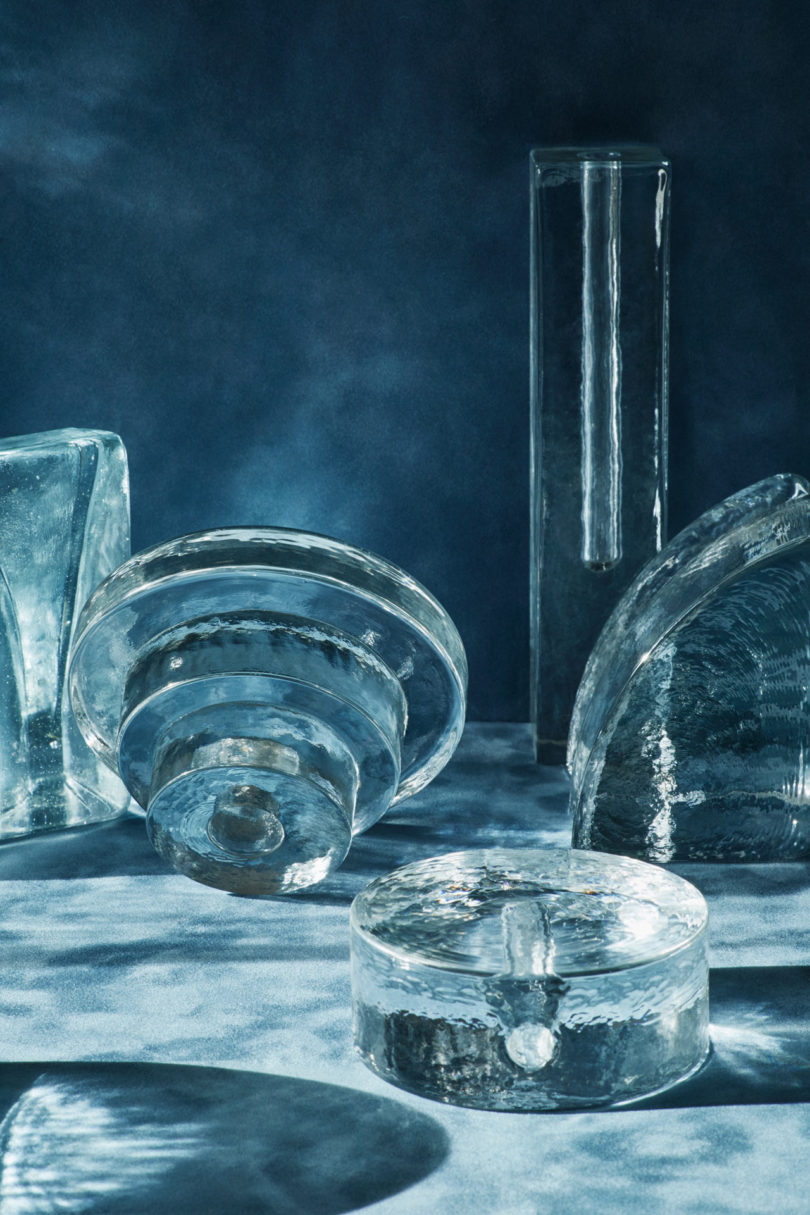 I only purchased my first piece of vintage Blenko ‘ice glass’ –thick, chunky cast-glass objects with a beautiful watery texture — last year, in the form of a half-cylinder bookend I found at a flea market in my hometown of Columbus, Ohio. But I quickly became obsessed with collecting it, both because it’s surprisingly inexpensive despite its ridiculous heft, and because transparent and cast-glass furniture and objects have been setting off my inner trend radar for almost two years now. 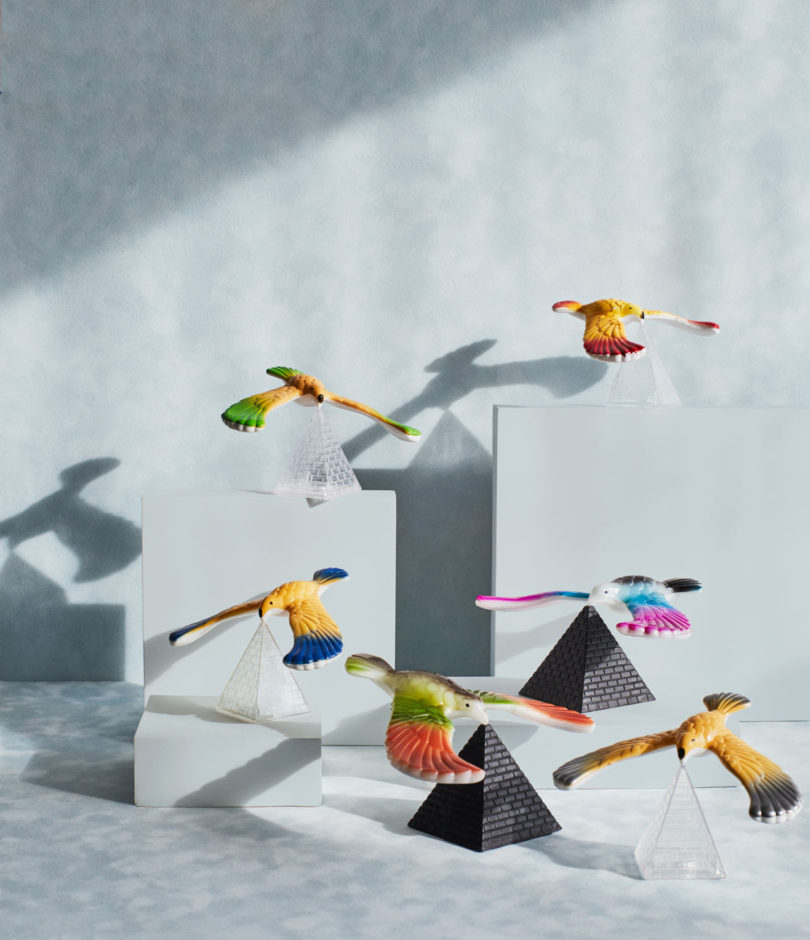 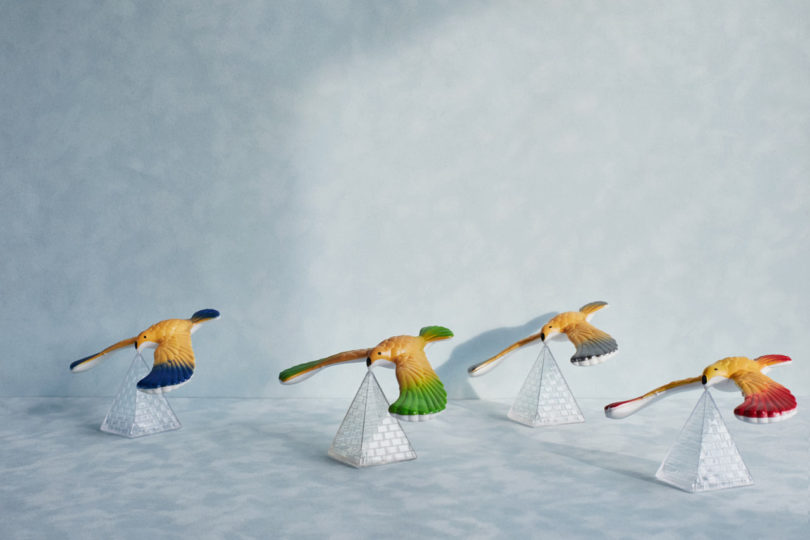 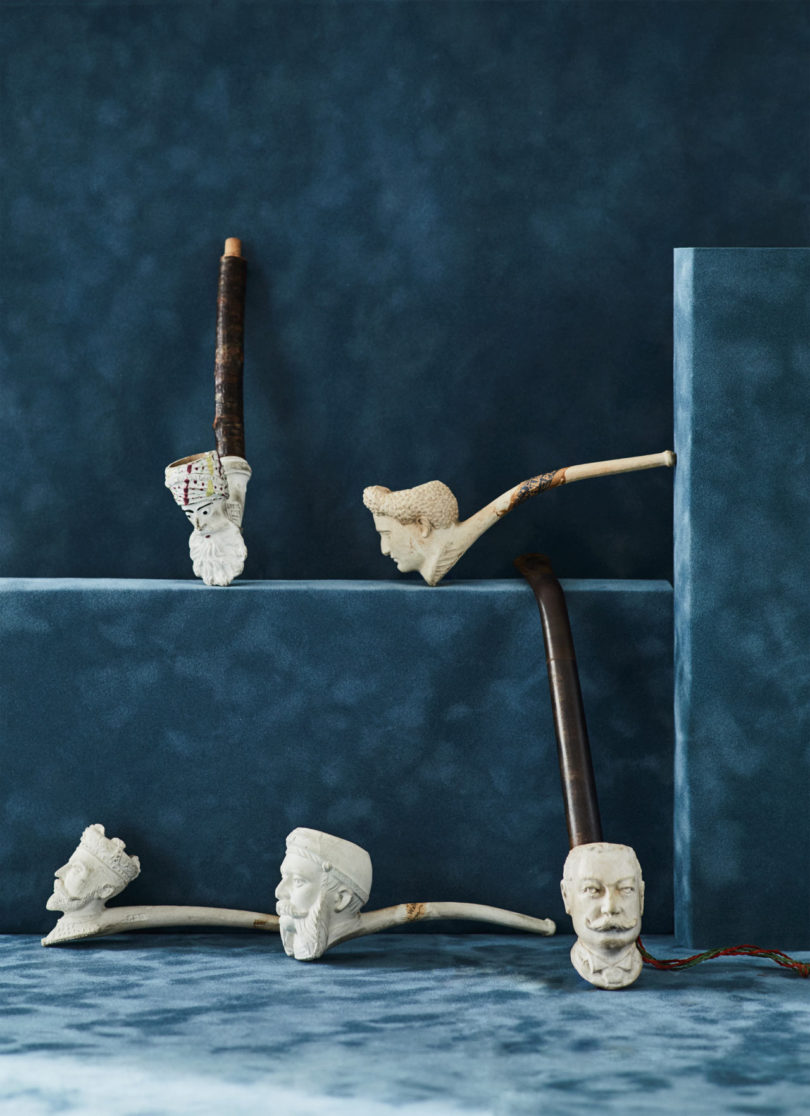 These vintage pipes are probably all from the late 19th century or early 20th century, and Dutch. One has really beautifully rendered curls. It’s a strange concept, smoking tobacco out of a head. Apparently the mud of all European urban waters are full of them (the Thames, the Canals of Venice, and Amsterdam). 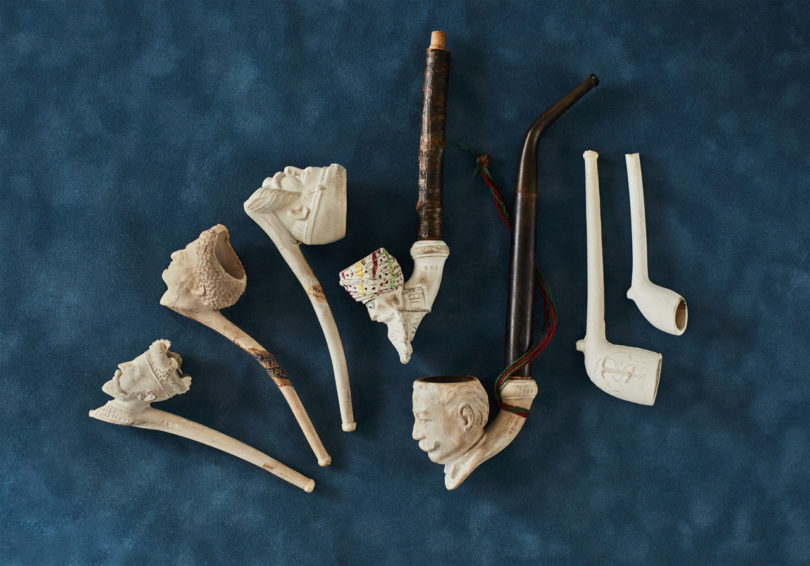 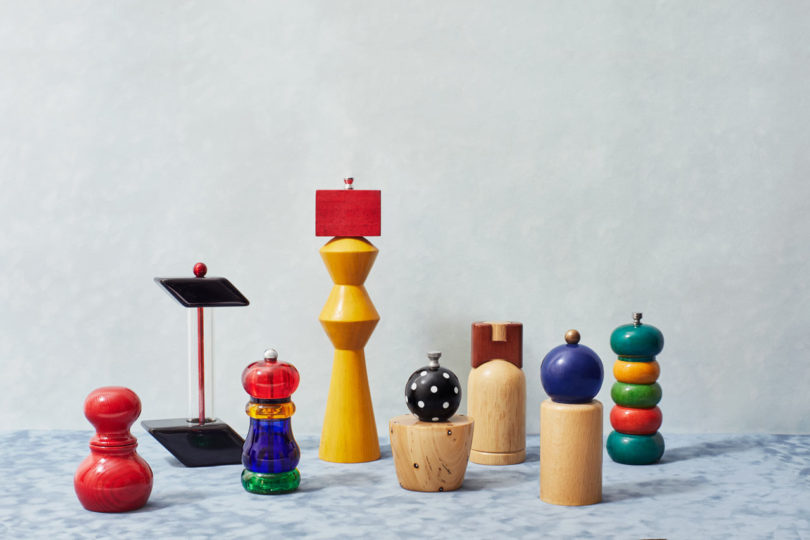 I’ve been collecting peppermills for some time, which led me to design my own last year. I have a bunch more at home which I can’t part with, but the group that I chose for the show are a great representation of the more modernist mills. My favorite is the tall black one with the glass tube (maker unknown) — it’s a great example of Memphis design.