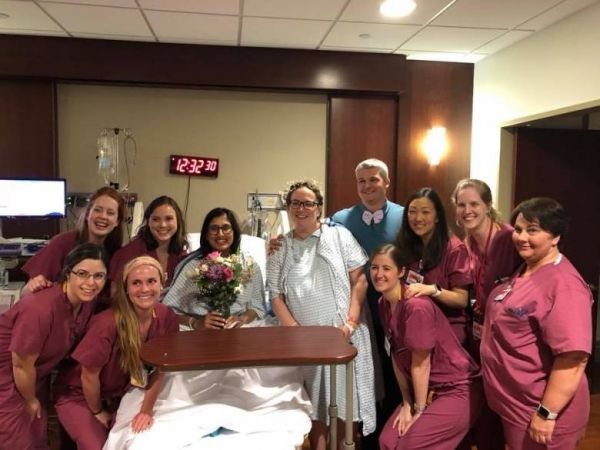 Brianna Doyle and Casey Walko were planning to get married before their baby came, and already had a license, but then Doyle went into labor early. At New York-Presbyterian/Weill Cornell Medical Center, the couple desperately searched for someone to solemnize their vows before the baby was born. Sushma Dwivedi volunteered that she was ordained in the Universal Life Church, and although she had never performed a marriage ceremony, she was willing to do it. But Dwivedi was a patient in the maternity ward -she was in labor herself!

There was just one problem. Dwivedi had just gotten an epidural and couldn’t move at all from the waist down.

“My legs were jelly by this point,” she said.

“It was a little bit of a Jabba the Hut moment where they took the automatic bed … and sort of propped that up so that I could sit and officiate, and they came to me in my room.”

With the officiant in bed, Doyle and Walko were married. The nurses had put together a bouquet and fixed Doyle’s hair. Both women gave birth to healthy babies within a few hours. The ceremony is on video at CBC Radio. -via Metafilter