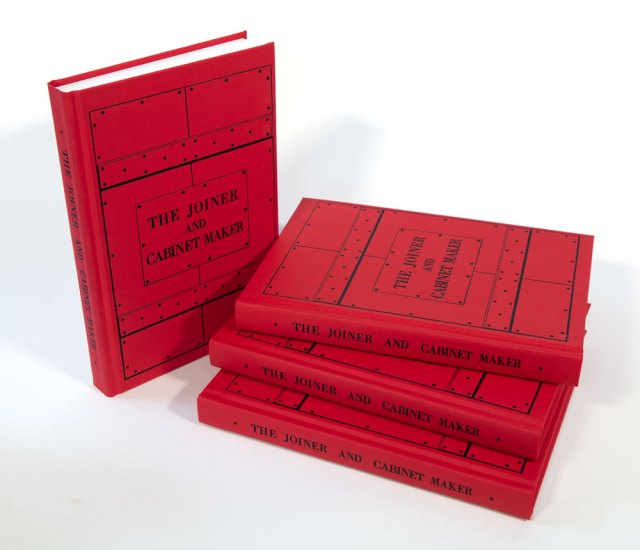 In 2007, a lightweight box showed up on Christopher Schwarz’s desk from Joel Moskowitz, who runs the Tools for Working Wood store in Brooklyn, N.Y. Inside was “The Joiner and Cabinet Maker,” a book first published in 1839 on working wood by hand. It was one of a series of books that introduced young people to the basic knowledge of trade skills: baking, coopering, printing, joinery and more.

But it’s not only a how-to; it’s presented as an engaging fictional tale that tells us of young Thomas, a boy apprenticed to a joiner’s shop in a rural English town. He begins his apprentice years sweeping the shop, managing the hide glue pots and observing the journeymen.

Then (plot twist), Thomas is told to build a rough box for a customer who is leaving on a journey that same day. We get every step of the project, from stock selection to construction to delivery, when Thomas brings along an envelope of cut nails for the customer so he can secure the lid shut before his trip.

Thomas goes on to build a school box and finally a large chest of drawers, while he learns the joinery and personal skills to become a journeyman.

Chris and Joel re-published the book in 2009 (it is now on its fourth printing) – and to go along with the historic text (included in its entirety), Chris constructed all three projects, with step-by-step instructions and drawings, and Joel wrote a section that explores the social structure of England in 1839, and woodworking during the period.

It is available in hardcover and as a searchable PDF; it is also the only Lost Art Press audiobook – recorded by Roy Underhill. That project was at the request of a school for autistic children, so that students could listen then build the projects.

The following is excerpted from “The Joiner and Cabinet Maker,” by anonymous, Christopher Schwarz and Joel Moskowitz.

Most modern woodworking texts are silent on the topic of nails. Ernest Joyce, the author of the widely distributed book “Encyclopedia of Furniture Making” (Sterling), put it thus:

“Apart from panel and veneer pins, the furnituremaker has little use for nails except for softwood work etc.”

I couldn’t disagree more. While it is surely possible to build furniture without ever driving an iron nail through wood (just ask a Shinto temple builder), that is neither an expedient nor historically accurate approach to building traditional Western furniture.

Antiques of the highest caliber bristle with nails – you just have to know where to look. Examine the cabinet’s back for rosehead nails. Do you see how the moulding and cockbeading are attached? How about the glue blocks that support the entire case piece behind the feet? In some cases, even the dovetails are nailed. And though some might contend that nails in antique dovetails were part of a shoddy repair job, that’s not always the case.

But before you scoot down to the hardware store to pick up some nails, read on a little farther. Those might not be the right nails for you. The first recorded nails are Roman nails, which appeared about 5,000 years ago and had a good long 4,800-year run. Roman nails are basically square and taper on all four sides to a point. They were handmade.

I’ve used nails like this, and they are tricky. You need a pilot hole, and you have to place your nails so they are as far away from the ends of boards as possible because these nails wedge your work in all directions. So splitting your work is easy – unless the wood is green.

In my opinion, the best nails are those that Thomas used in “The Joiner and Cabinet Maker.” Thomas used cut nails, which are much different than both the Roman nails (sometimes called wrought nails) and the modern wire nails used in carpentry today.

Wire nails are made from long spools of wire – no surprises here. The wire flies through a machine that snips it to the proper length, then a machine “upsets” one end of the wire to create the head and sprays the fastener with some sort of adhesive or coating, depending on what the nail is to be used for.

So wire nails are either round or basically square in section (the square ones are used in pneumatic nail guns). They don’t taper in their length. They are incredibly cheap. They also don’t hold particularly tenaciously (with some exceptions), though they are excellent for carpentry or situations where you don’t need a bulldog grip.

Reproduction furniture makers who use hand-driven nails still typically use cut nails, just like Thomas did. Why are they called “cut” nails? These fasteners are sheared from a sheet of steel stock. (Imagine a Kit Kat candy bar being broken up into individual sticks. It’s a bit like that.) However, instead of being round or square, cut nails are rectangular in section; they taper in width but not in thickness.

Cut nails were the nails of choice in the 19th century. They were made in large numbers at the beginning of the century but were driven to near-extinction by the less expensive and more convenient wire nails by the end of the century.

In the “The Joiner and Cabinet Maker,” the reader is advised to learn how to straighten cut nails that have been bent and then discarded. This activity might seem like quaint parsimony, until you’ve bought a few boxes of these fasteners. Modern cut nails are made using the same machines and processes as they were in the 19th century and, as a result, they are expensive.

I pick up every nail I drop. I straighten (or try to) every nail I bend. It’s a bit of a meditative skill. Tap the nail with a lightweight hammer while holding the fastener on an anvil or a steel plate. Many small taps are better than one mighty blow.

And one more piece of advice: If you cannot save the entire nail, snip off a straight section and use that as a headless brad for finer work.

If you can’t afford cut nails, the next best thing is to buy cement-coated wire nails (which are actually coated with a heat-activated resin). Furniture maker Jeff Headley uses these, and he modifies the head by beating them with a hammer on an anvil to give the head a squarish shape. When installed, these hold well and look like cut nails.

How to Choose the Right Nail
The number of styles of cut nails is bewildering, and they all look similar and have odd designations for their lengths. Even today, nails are sold using the original pennyweight system. 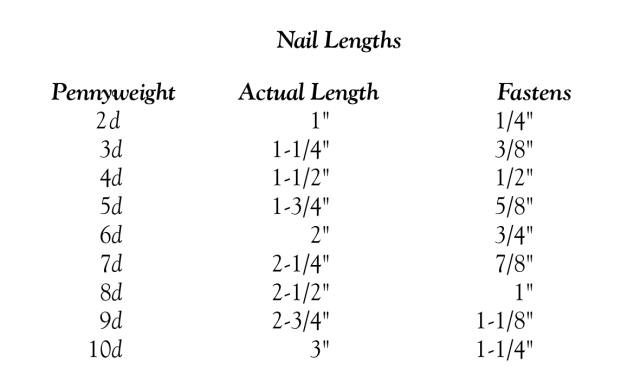 What you need to know about the pennyweight system today is that a 2-penny nail (and “penny” is typically abbreviated as d) is 1″ long. Each additional pennyweight adds a 1/4″ to the length of the nail on up to 10d nails, which are 3″ long. (Nails longer than 3″ are sold differently. If you need nails longer than 3″, however, you’re not a furniture maker.)

Naturally, you are wondering what length of nails you should stock up on to build furniture. Most of my furniture work requires 4d (1-1/2″ long) and 6d (2″-long) nails. There is a formula you can use, however, to arrive at this same conclusion.

Of course, pay some attention to the board on bottom – you don’t want the nail’s tip to poke out the other side.

So now you know what lengths you need. What about all the different styles of nails? There are three commonly available styles of nails that I use to build furniture. And there is one style of nail that is difficult to find (in the Midwest, at least) but easy to make. Here are the four styles and what they are good for. I’m going to use the names that Tremont Nail Co. (tremontnail.com or 800-835-0121) uses because that company is by far the largest modern-day supplier of cut nails.

Fine Finish Standard Nail: This type of nail holds carcases together. It has a pronounced taper and a large head, so it will wedge up your workpieces well and hold tightly. Its strong wedge is a two-edged sword. It also will readily split your work if you aren’t cautious.

Cut Headless Brads: These slender nails are excellent for attaching moulding. They don’t have as pronounced a taper and are skinny things, so they aren’t suitable for full-scale case construction. But their scrawniness is ideal for jobs where the nail head will show, such as attaching face frames (with the assistance of glue). I typically add a 3/16″ bead detail to my face frames, and these nails sneak into the quirk of the bead nicely. Note that the maker says these brads are headless; that’s not entirely true. They have a small head.

Clinch Rosehead Standard: Rosehead nails are great for attaching cabinet backs or anywhere you want the nail head to shout, “I’m a nail.” There also is a version of this nail (that is more expensive) called a “wrought head nail” that has a black finish and a head that looks hand-finished. Use this nail when you want to shout, “I’m an old nail.”

Sprigs: You’ll see this nail mentioned many times in “The Joiner and Cabinet Maker.” Sprigs are headless nails or nails that have a head on only one side of the nail – they make something of an “L” shape. I have yet to find a reliable source for these nails, so I make my own by clipping the heads off of the cut headless brads listed above. Sprigs, as you will find out, are great for attaching delicate mouldings or for lightweight structural applications.

Using cut nails involves some know-how and a special shopmade tool, which we’ll cover in building the Packing Box, the first project in “The Joiner and Cabinet Maker.”

Need Milk Crates? Get 'Em Cheap (and Legally) by Ordering Directly From the Manufacturer