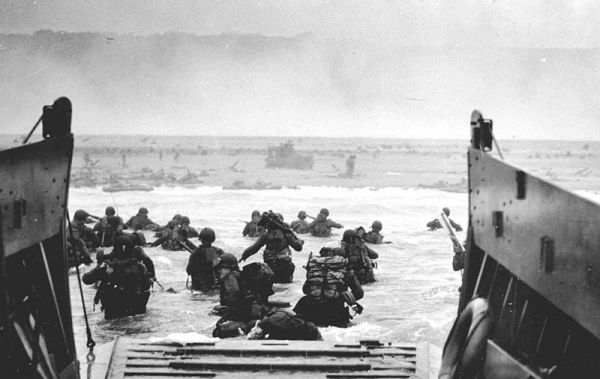 Thursday marks the 75th anniversary of D-Day, the Allied invasion of Europe that turned World War II around. It may be the last major anniversary in which veterans who participated will be present. Ray Lambert was a 23-year-old US Army medic who served in the First Division, known as the Big Red One.

In the opening minutes of battle, by one estimate, 90 percent of the frontline GIs in some companies were killed or wounded. Within hours, casualties mounted into the thousands. Lambert was wounded twice that morning but was able to save well more than a dozen lives thanks to his bravery, skill and presence of mind. Impelled by instinct, training and a profound sense of responsibility for his men, he rescued many from drowning, bandaged many others, shielded wounded men behind the nearest steel barrier or lifeless body, and administered morphine shots—including one for himself to mask the pain of his own wounds. Lambert’s heroics only ended when a landing craft ramp weighing hundreds of pounds crashed down on him as he attempted to help a wounded soldier emerge from the surf. Unconscious, his back broken, Lambert was tended to by medics and soon found himself on a vessel heading back to England. But his ordeal was far from over. “When I came out of the army I weighed 130 pounds,” Lambert says. “I’d been in hospital for almost a year after D-Day, in England, then back in the States, before I was able to walk and really get around too good.”

Now 98, Lambert will be in Normandy for the D-Day commemorations. Read his story at Smithsonian.

Rating One of the Few Surviving Heroes of D-Day Shares His Story is 5.0 / 5 Votes: 2
Please wait...
Loading...
Related articles