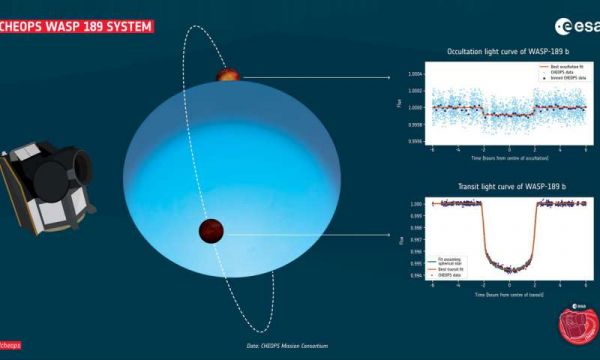 The space telescope CHEOPS has detected some really wild data about an exoplanet 322 light years away. The planet is named WASP-189b, and it orbits the star HD 133112. At least that’s what they are known by now; better names will come along sooner or later. Monika Lendl of the University of Geneva tells us how weird this planet really is.

“WASP-189b is especially interesting because it is a gas giant that orbits very close to its host star. It takes less than three days for it to circle its star, and it is 20 times closer to the star than Earth is to the Sun,” Monika Lendl says. The planet is more than 1.5 times as large as Jupiter, the largest planet of the solar system.

Monika Lendl further explains that planetary objects like WASP-189b are very exotic: “They have a permanent day side, which is always exposed to the light of the star, and, accordingly, a permanent night side.” This means that its climate is completely different from that of the gas giants Jupiter and Saturn in our solar system. “Based on the observations using CHEOPS, we estimate the temperature of WASP-189b to be 3,200 degrees Celsius. Planets like WASP-189b are called “ultra-hot Jupiters. Iron melts at such a high temperature, and even becomes gaseous. This object is one of the most extreme planets we know so far,” says Lendl.

The star it orbits is pretty extreme, too. Read about the findings from CHEOPS at PhysOrg. -via Damn Interesting

Rating One of the Most Extreme Planets in the Universe is 5.0 / 5 Votes: 1
Please wait...
Loading...
Related articles