Recently, United Parcel Service (UPS) drivers have begun sharing pictures of sweltering temperature readings well above 100F (38C) from inside their delivery trucks. In a viral tweet shared by Teamsters for a Democratic Union, workers show thermometers reaching 116F, 117F, and 121F — working conditions that are far from what is considered safe. “UPS CEOs would never accept working in 120- or 130-degree offices. Drivers shouldn’t either,” wrote the grassroots movement of the union representing UPS truck drivers.

Apparently, most of these trucks lack air conditioning, putting employees at risk of heat-related injuries. Delivering parcels at record-high heat levels amid scorching weather on the East Coast and the central United States, drivers have set out to inform everyone about the circumstances they are forced to work in, as well as spark a debate about their safety and protection.

Teamsters Union is campaigning for action, calling for changes like providing fans in every vehicle. Meanwhile, drivers are taking to Twitter to share how difficult it is to make it through the summer heatwave, and people are revealing how it affects their deliveries. Scroll down to read the insights and reactions Twitter users shared online, and be sure to weigh in on the situation in the comments. 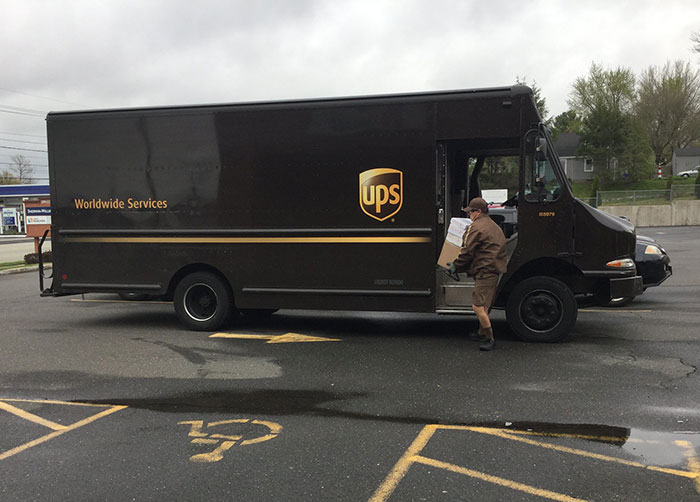 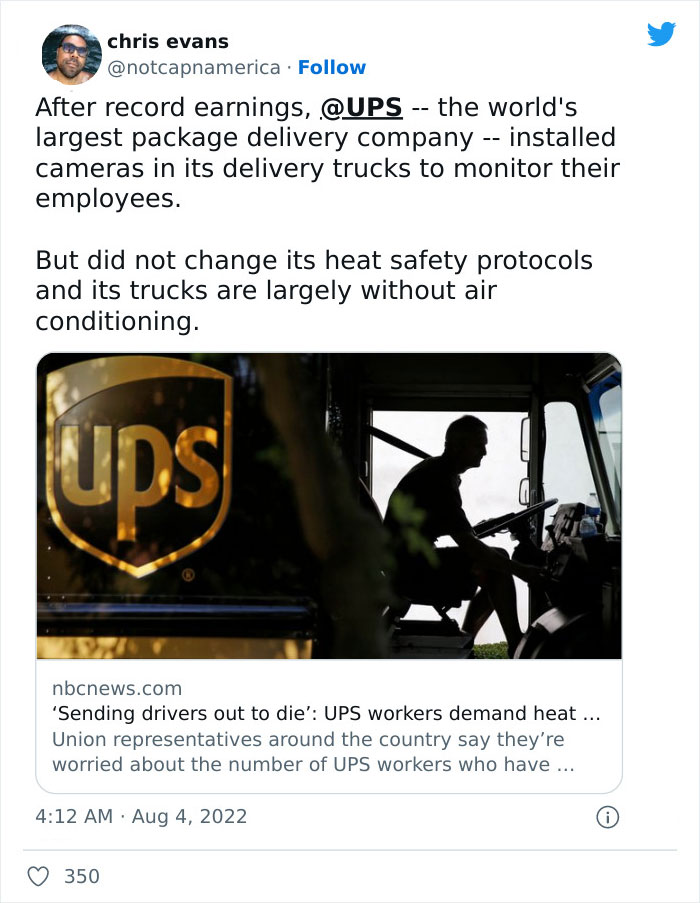 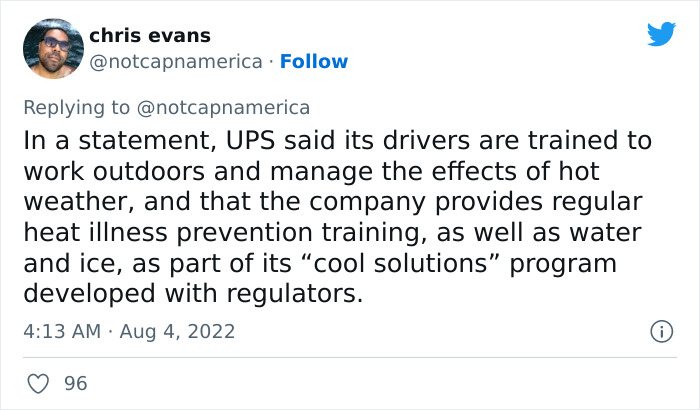 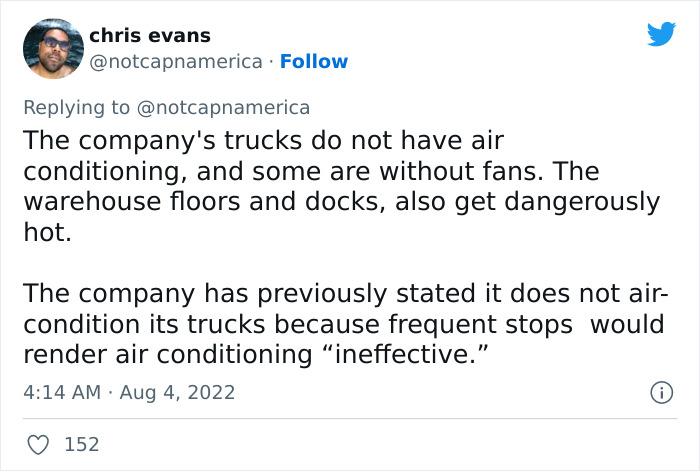 In a viral tweet, drivers show thermometer readings of 116F, 117F, and 121F amid record-breaking temperatures 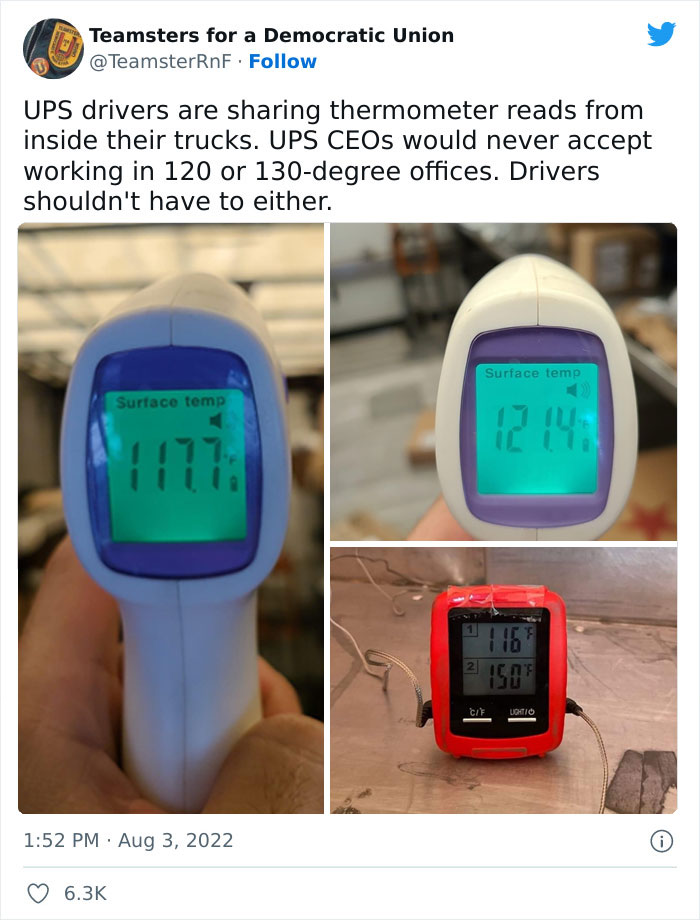 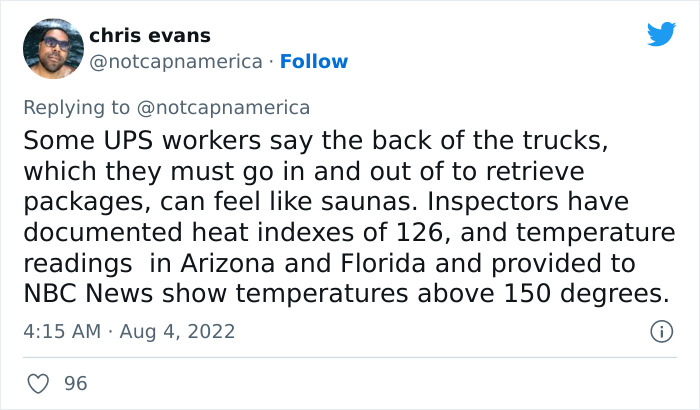 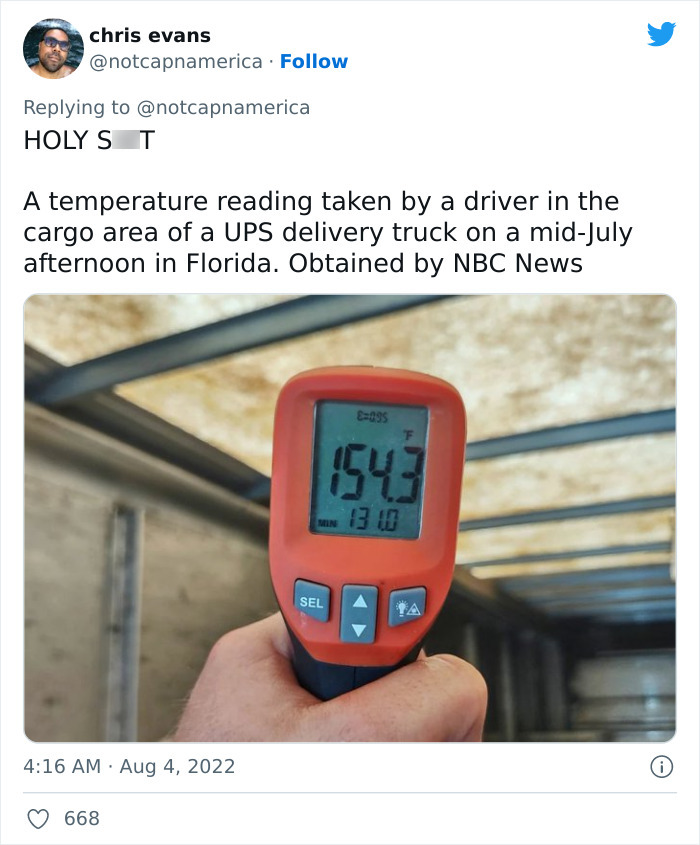 Since workers are experiencing heat stroke and other heat-related injuries, people are calling for action 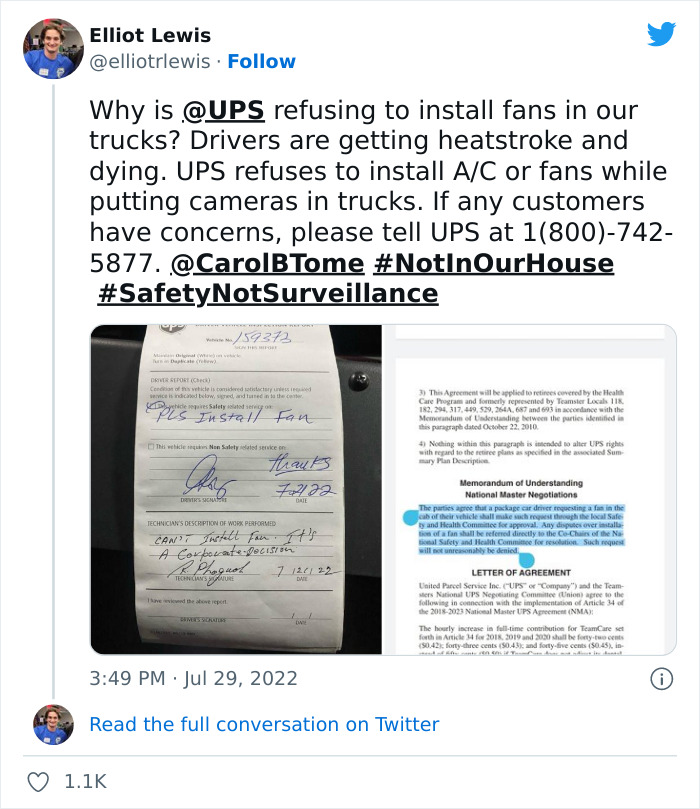 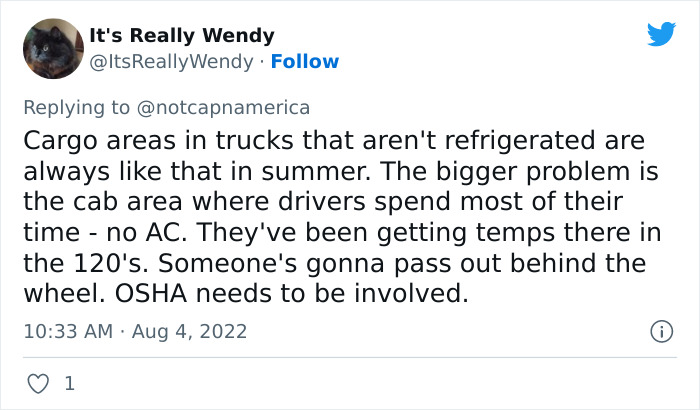 As several states experience extremely hot summers, workers who have to endure the heat are increasingly struggling to manage their way through it. According to Adiel Kaplan, a reporter with the NBC News Investigative Unit, more workers seem to be getting sick or hospitalized because of the heat this year than the ones before. “Left and right, people are falling out,” a union steward in Dallas, Jeff Schenfeld, told NBC News. “Something is different this year. It’s a lot more people.”

But after UPS posted record earnings last year, it installed cameras in its delivery trucks yet decided to ignore changing heat safety protocols. Unfortunately, in June, a young UPS driver died just after his 24th birthday after he collapsed while delivering packages in Los Angeles, the family suspected heat stroke to be the cause. This event reignited questions about the company’s priorities, making employees demand that more safety measures be put in place.

“UPS hasn’t been proactive at all on the topic of heat, and that’s going to have to change,” said Sean M. O’Brien, general president of the union, the Teamsters. “By refusing to implement these safety measures, the company is literally sending drivers out to die in the heat.”

The Teamsters issued a public letter requiring UPS to immediately take action to improve safety for its employees, from installing fans in every truck to providing cool neck towels and consistent supplies of water and ice.

However, the UPS spokesperson told Insider that the company invests over $260 million per year in safety programs: “UPS drivers are trained to work outdoors and to manage the effects of hot weather. Preparation, rest, hydration, and maintaining good health practices are key to working outdoors.”

“We also offer our employees multiple ways to share their concerns with us, and we promptly address issues when they are brought to our attention,” the spokesperson continued. “We never want our employees to continue working to the point that they risk their health or work in an unsafe manner.”

But heat illness only seems to be a bigger risk for UPS employees as the temperatures keep rising. Previously, UPS vice president of public relations, Steve Gaut, told NBC News that the company does not air-condition its fleet of package trucks “because frequent stops and the size of the vehicles would render air conditioning ineffective.” This is the same reason they don’t use AC in large warehouses.

According to Mayo Clinic, heat stroke usually occurs when your body is overheating and is the result of prolonged exposure to or doing physical activities in higher temperatures. It is the most serious form of heat injury that is common during the summer months, and it happens once your body temperature rises to 104F (40C) or higher.

Twitter users and delivery workers came forward to share their reactions, here’s what they had to say 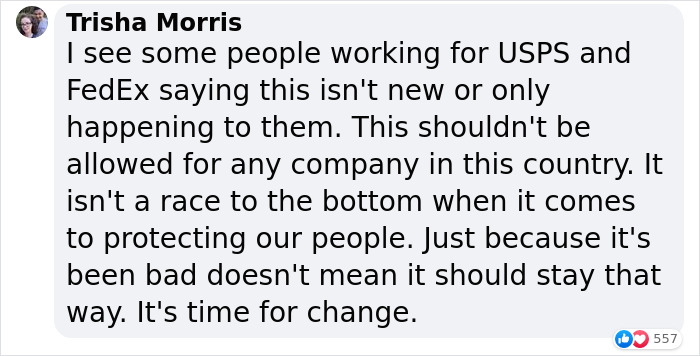 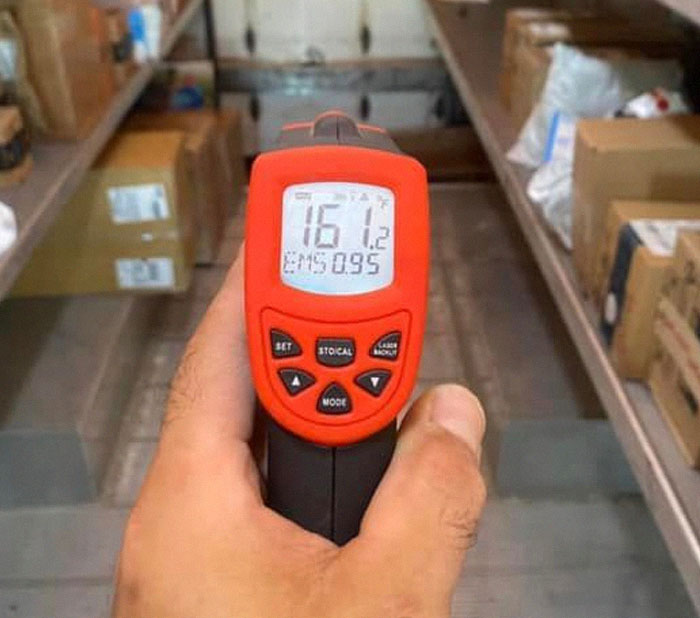 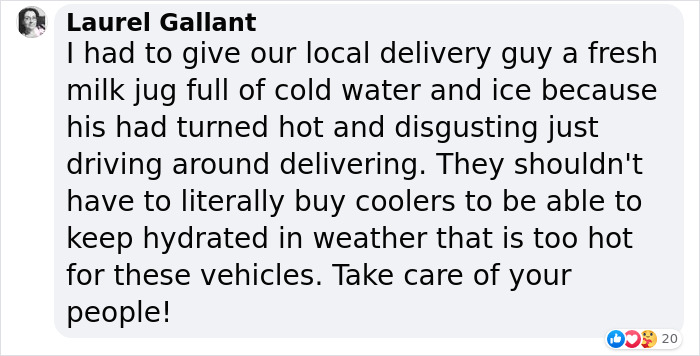 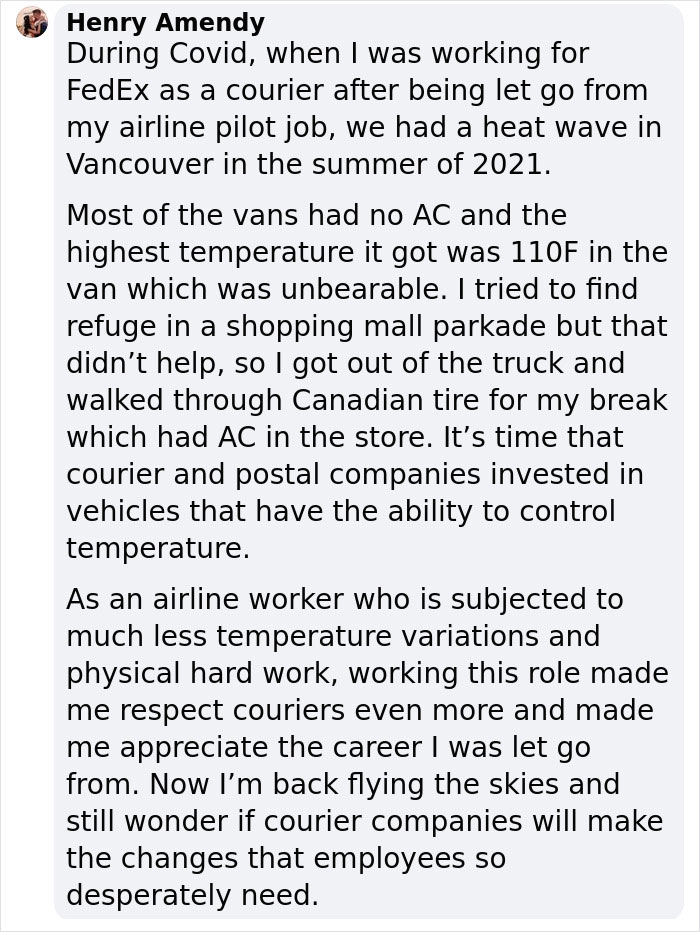 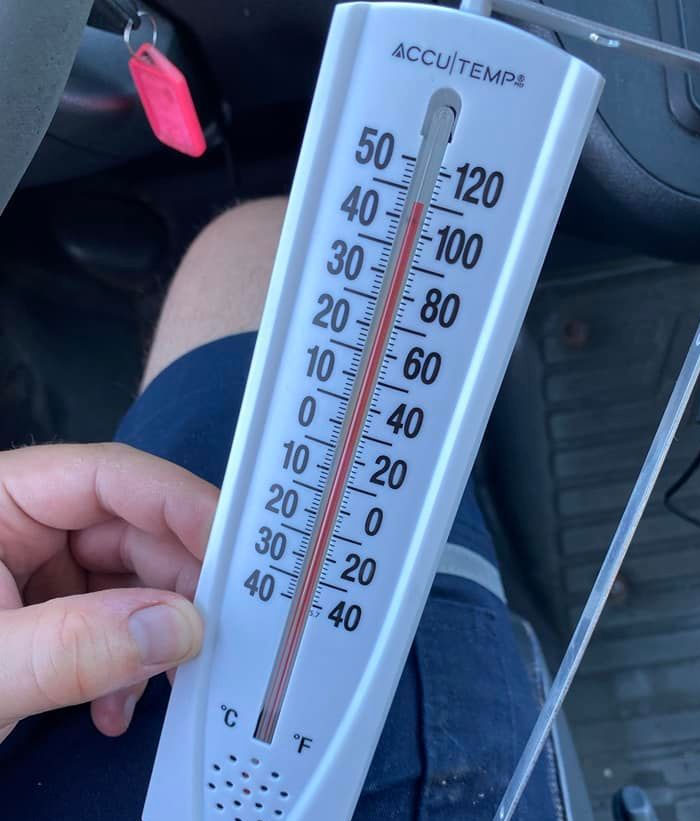 The post “OSHA Needs To Get Involved”: Drivers Record 120+ Temperatures In Their Trucks Without AC, Demand Heat Safety From UPS first appeared on Bored Panda.