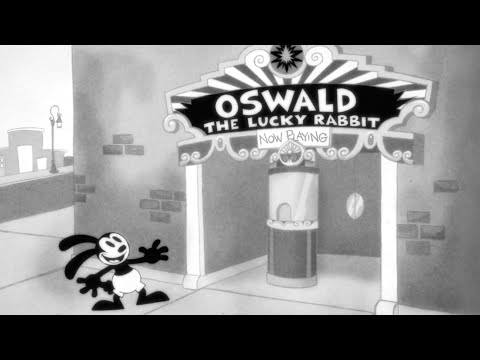 Walt Disney and animator Ub Iwerks created the character Oswald the Lucky Rabbit in 1927 for Universal Pictures. They produced quite a few Oswald cartoons, which proved to be highly popular. Oswald introduced the idea of a cartoon character with his own personality, which was neither all good nor all bad, but made audiences relate to him as well as laugh at him. Disney made enough money from the Oswald cartoons to buy land for his new animation studio. But Disney and Universal parted ways in 1928, and Universal owned the character. So Walt and Ub came up with a different character of their own they eventually named Mickey Mouse. Universal cranked out Oswald cartoons until 1938, then relegated him to comic books.

In 2006, Disney regained rights to Oswald the Lucky Rabbit, and 95 years later have a brand new Disney animated short featuring Oswald’s classic physics-defying rubber hose humor, with the dialogue-free black-and-white style of the 1920s. Read more about Oswald and what he means to Disney at Gizmodo.