Every holiday has its own traditions, but that doesn’t mean we’re not allowed to break them. Many people love celebrating Halloween with the classic itinerary: dressing up in costume, carving pumpkins, trick-or-treating or throwing a party, visiting a pumpkin patch or corn maze, telling spooky stories and indulging in all of your favorite sweet treats. But if you would rather paint pumpkins than carve them, spend the day running a marathon through a cemetery or pass out treats that are of the non-edible variety, there is nothing wrong with that! Or rather, there shouldn’t be anything wrong with that…

One parent recently got the brilliant idea to pass out movie vouchers to their son’s class, in lieu of Halloween candy, but this plan unfortunately backfired after a few mothers decided to throw a fit. Below, you can read the full story that the parent shared on the “Am I The [Jerk]?” subreddit, as well as some of the replies readers have left weighing in on whether or not this was a wise choice. We would love to hear your thoughts on this situation in the comments below, and then if you’re interested in another Bored Panda article discussing trick-or-treating drama, you can find that right here. 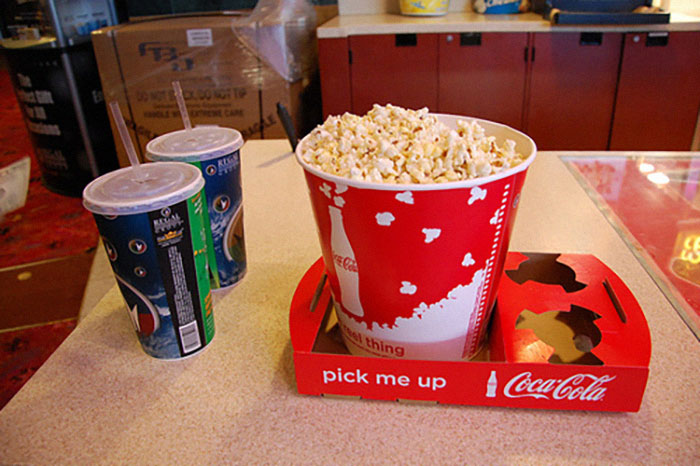 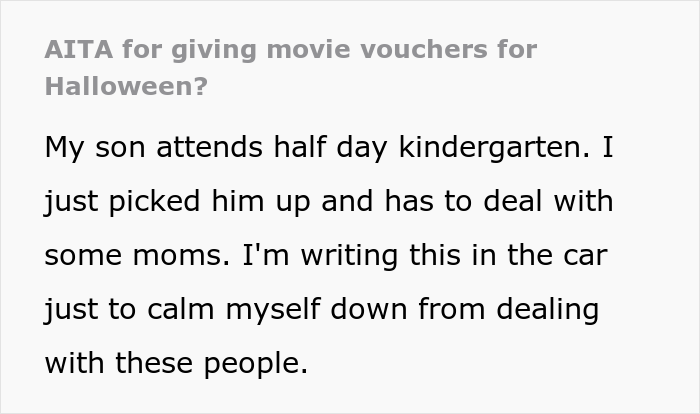 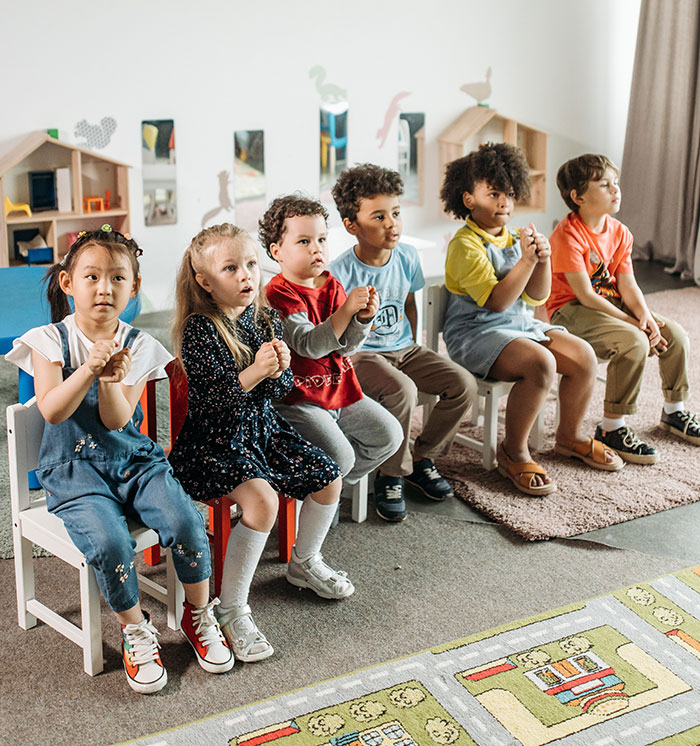 The parent later shared some additional details about the situation 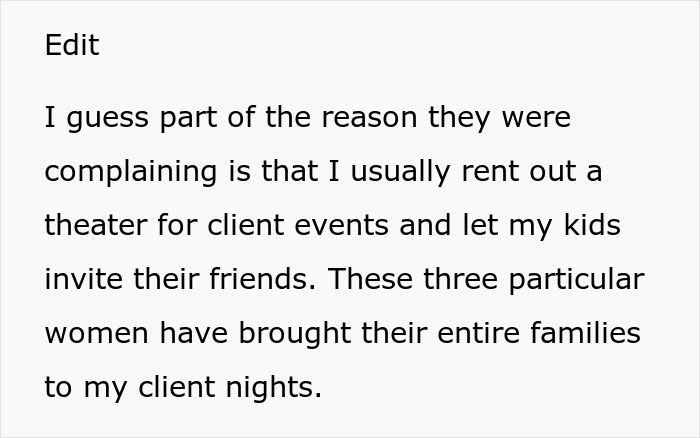 While candy is the go-to treat to be passed out on Halloween, there are no strict rules dictating what can and cannot be given out. Candy is a simple and safe option, but it does not take any creativity. Why not think outside the box and come up with a non-edible alternative? It is likely that the children in this class returned home from school with more candy than they could ever need, so I’m sure they were thrilled to have something else to mix up their Halloween haul. Plus, it took thinking outside of the box and additional effort for this parent to get movie vouchers for their son’s class. A gift is a gift, and if the other parents had no intention of using it, they could have kept that information to themselves.

It is actually genius to be handing out a non-edible Halloween treat when so many children have allergies and dietary restrictions nowadays. In the United States, 5.6 million children, or roughly two in every classroom, have some sort of food allergy, and 40% of these kids are allergic to more than one type of food. Some of the most common foods to be allergic to are milk, peanuts, tree nuts, wheat and soy, many of which are present in popular candies. For the children who are allergic to half of the Halloween treats they bring home, it must have been extremely exciting to be given an experience they could enjoy, rather than treats their parents would have to take away from them to ensure their safety.

Most parents also try to limit their children’s candy intake, particularly following Halloween, so it is shocking that they were upset about having less sugar around. There is nothing wrong with enjoying some sweet treats in moderation, and all kids should embrace Halloween to the fullest extent. But it is a fact that in the United States, the rates of children being diagnosed with type 2 diabetes has nearly doubled in the last two decades. And on Halloween alone, the average American kid consumes about 7,000 calories and three cups of sugar. While most of our bodies, especially children, can handle indulging like that on rare occasions, such as once a year on October 31st, one would think that parents would be thrilled to see their kids eating less candy around the time of Halloween.

Many readers sided with this parent, assuring them that they had done nothing wrong 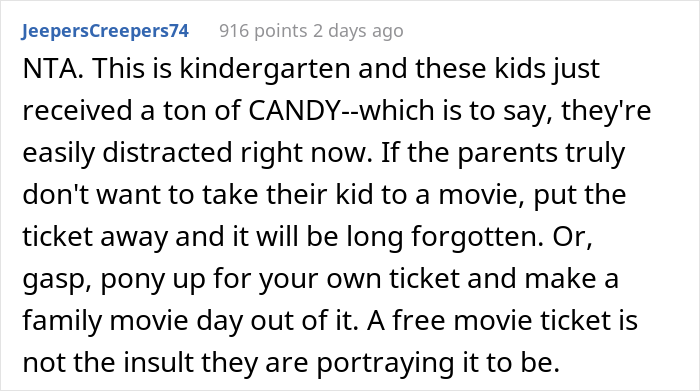 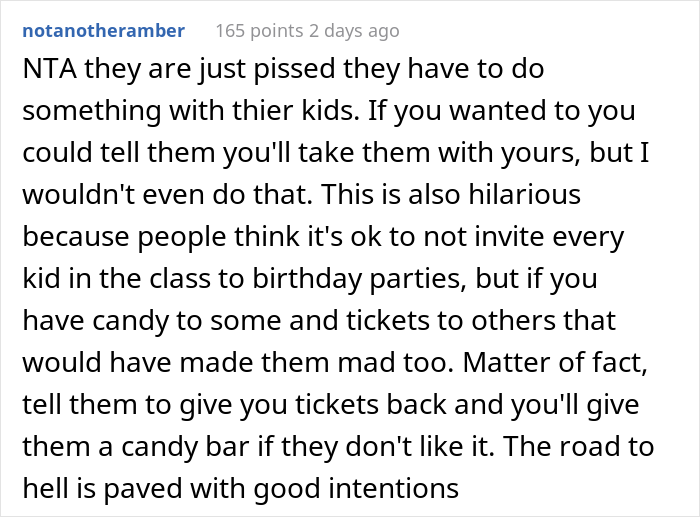 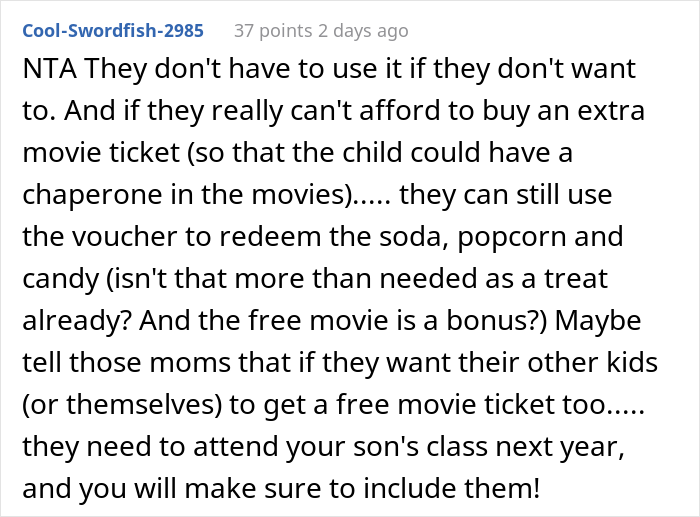 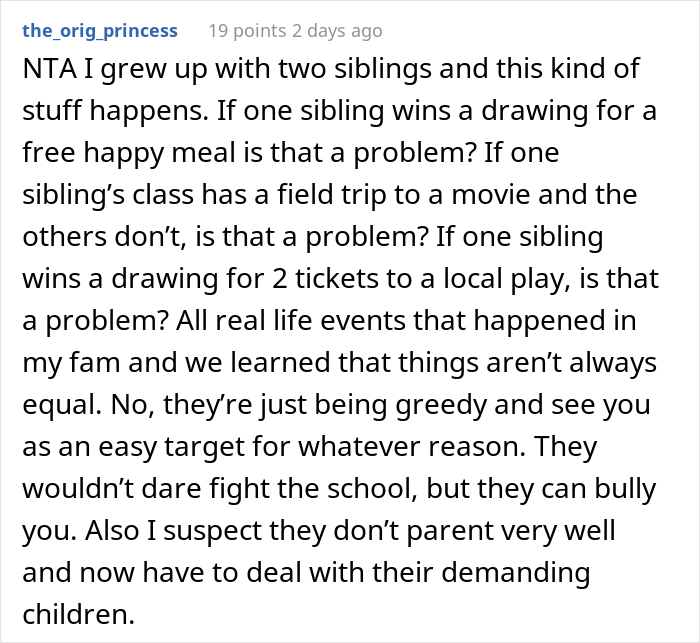 If the mothers in this story were so concerned about not being able to use the movie vouchers, I’m sure they could have found a solution to the issue without being rude or abrasive towards the parent that went out of their way to get these coupons. Perhaps they could have organized a time where one of the moms could take all of their kids to the movies at once, and then only one adult ticket would need to be purchased.

Most movie theaters also sell youth tickets at discounted prices anyway, so it would likely not be very expensive to take their other kids with them if they had to. As some of the readers pointed out in the comments on this post, we might not be able to speculate on the financial situation of these other families. But even if some are struggling, their kids could likely go see a movie with a friend whose parent would not mind purchasing a ticket.

Apparently no good deed goes unpunished, as this parent had to learn the hard way. I hope they have not been deterred from providing creative Halloween treats in the future, as many of the kids probably loved their idea, but I can imagine how frustrating it was to deal with these upset moms. We would love to hear your thoughts in the comments below. Do you think the movie vouchers were a good idea, or are you more of a traditionalist when it comes to Halloween? Then if you want to check out another Bored Panda article discussing post-trick-or-treating mama drama, look no further than right here. 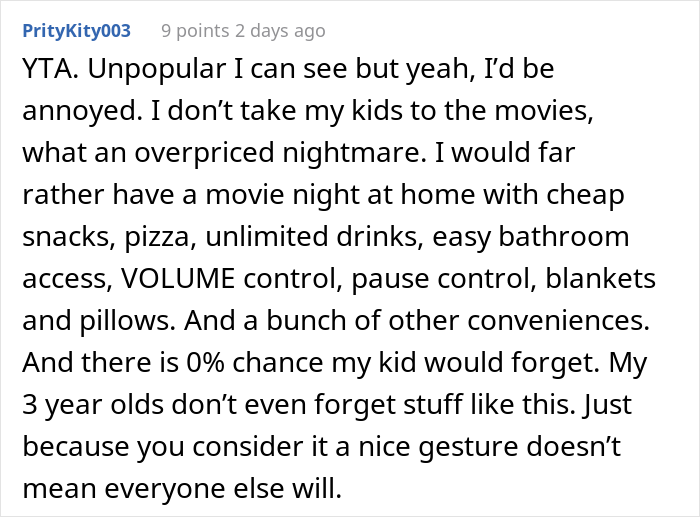 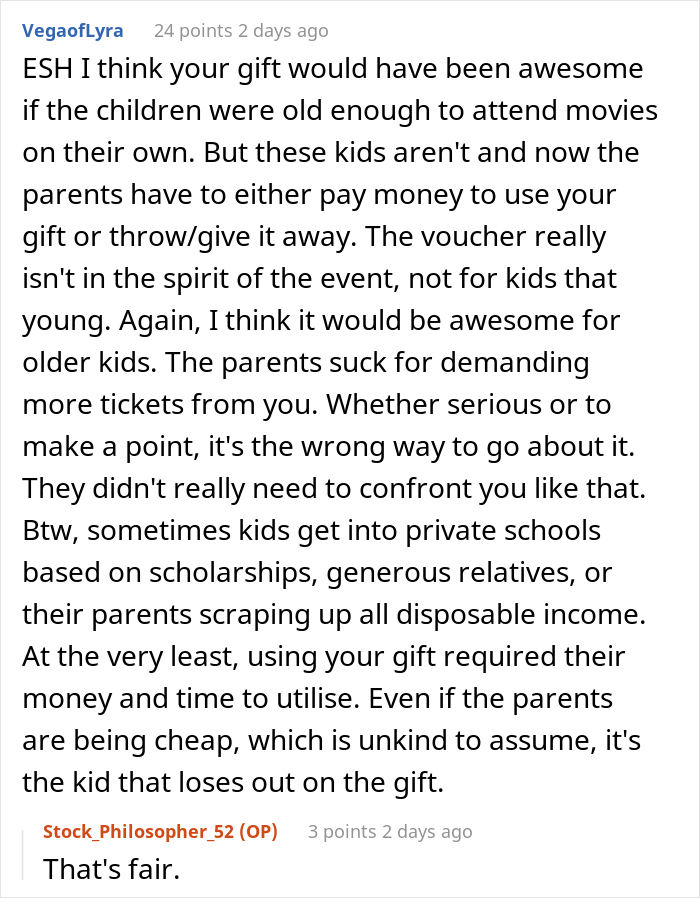 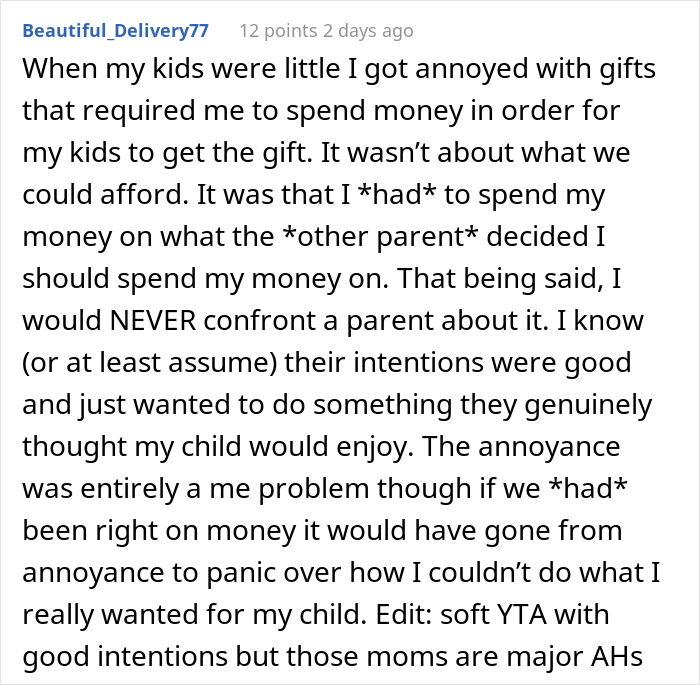 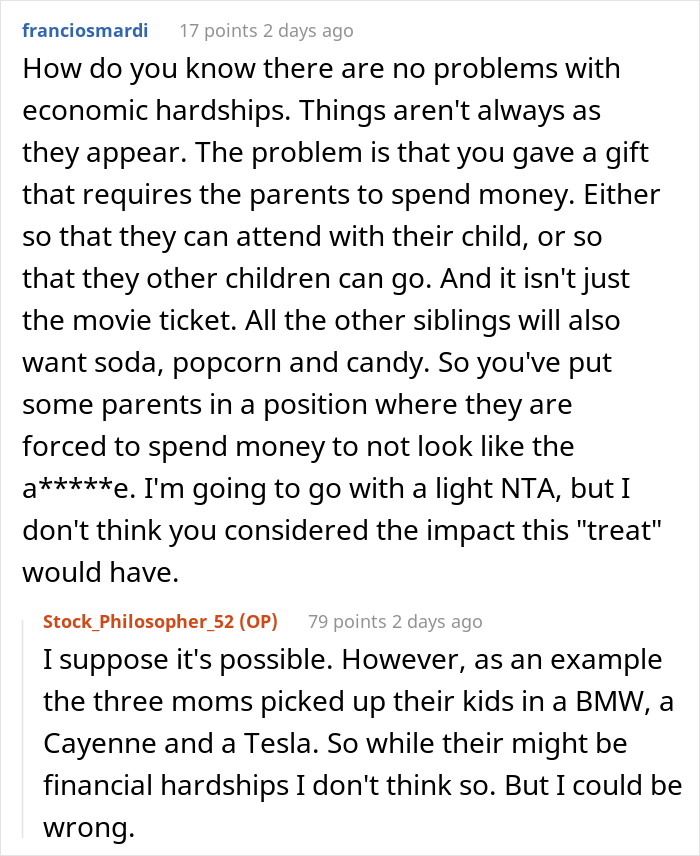 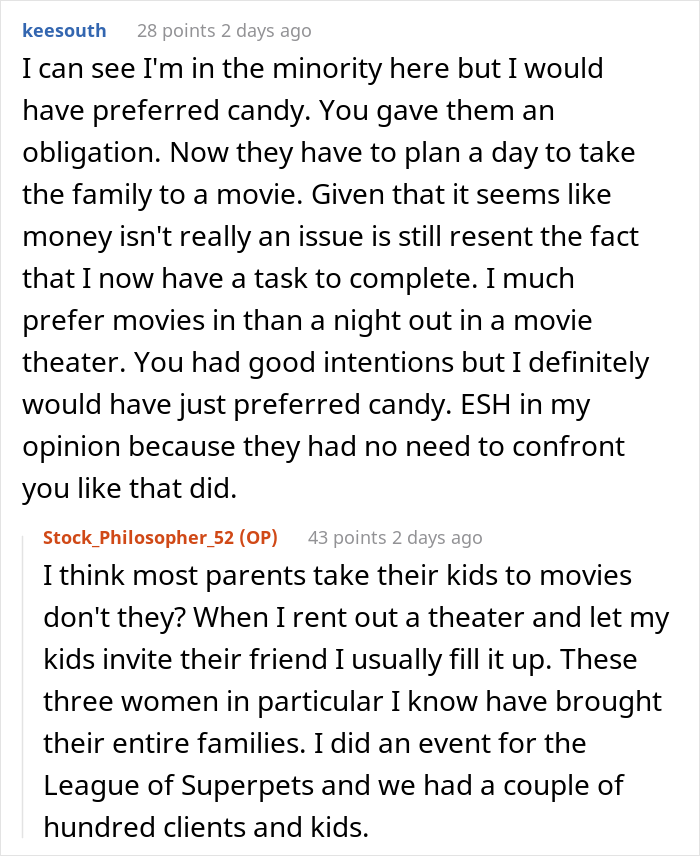 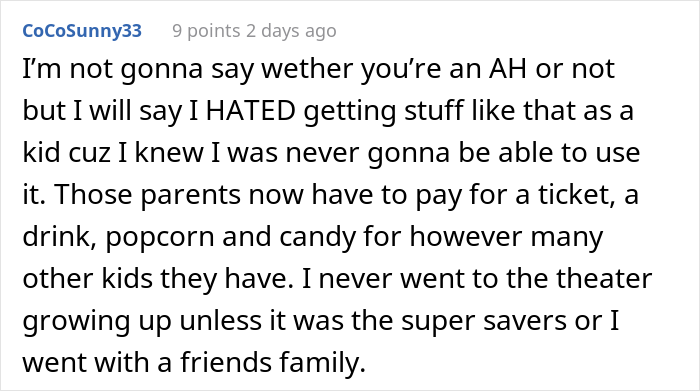 The post Parent Gives Their Son’s Kindergarten Classmates Movie Vouchers, Calls Other Parents “Greedy” And “Cheap” After They Confront Them first appeared on Bored Panda.