Generational differences have always been a point of discussion. Not only because there’s always at least a little bit of tension between parents and kids, but also because of the things that “come with the territory.” You know, when parents become grandparents, they feel like it’s as much about them as it is about their adult children and grandchildren.

Several parents have been coming out and joining the discussion on boundaries, the “my house, my rules” concept, and what actually matters when it comes to grandparent-grandchild relations. This is all in the hopes of reducing—and hopefully eliminating—toxic grandparenting and fostering respect.

It’s great that grandparents want to spend time with their grandkids, but boundaries are always inevitably inbound 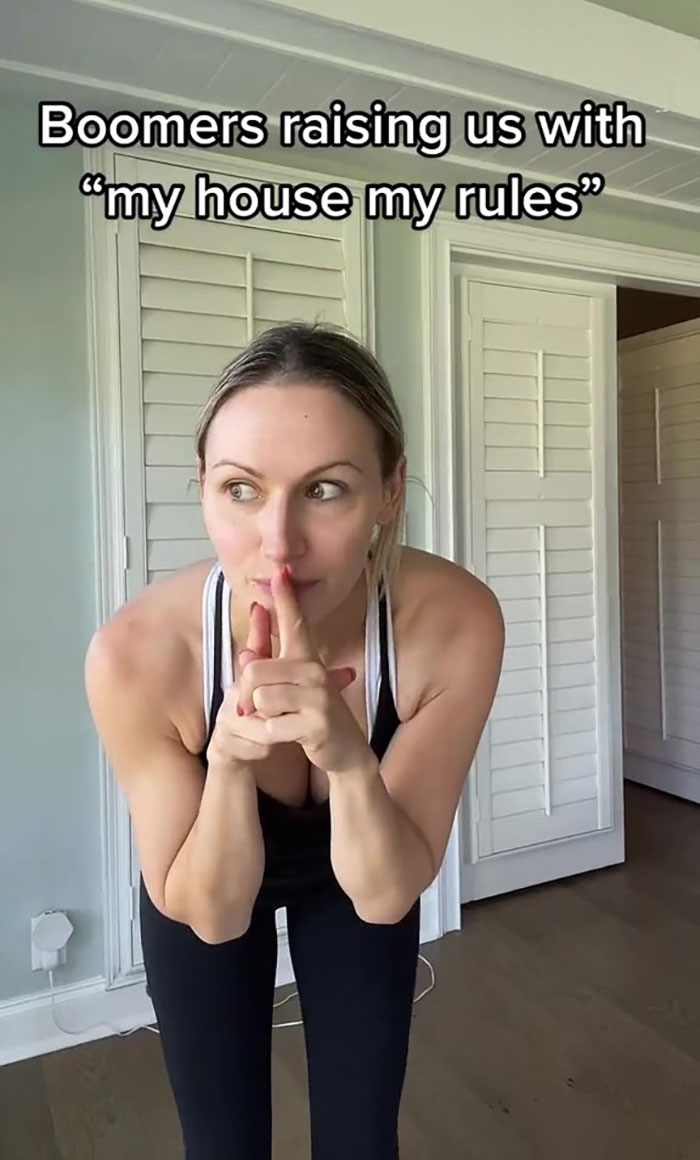 Digital creator, housewife, and mother Lisa Pontius posted a video in which—in good old TikTok fashion—she was dancing to the tune of “The Joke Is On You” by Niki Watkins. The captions point out the irony in how “boomers” say “my house, my rules,” yet they also get upset when their kids, now parents themselves, start imposing their boundaries in their houses. Yeah, take that!

Also in good TikTok fashion, there were folks responding to this in the form of comments. One of these comments pointed out that what Lisa did was effectively her own version of the “my house, my rules” idea.

Parents and experts on TikTok have been discussing grandparent boundaries, their importance, and nuances 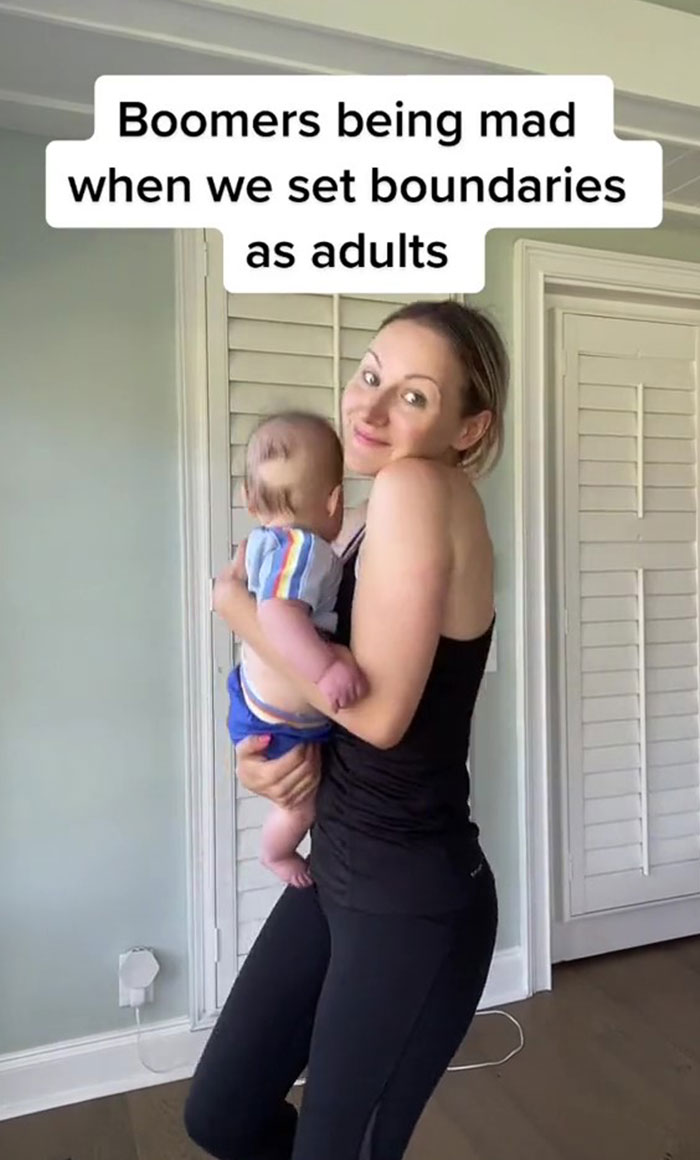 Stay-at-home-mom Lisa Pontius gave a spot-on explanation of how the “my house, my rules” idea differs from setting boundaries 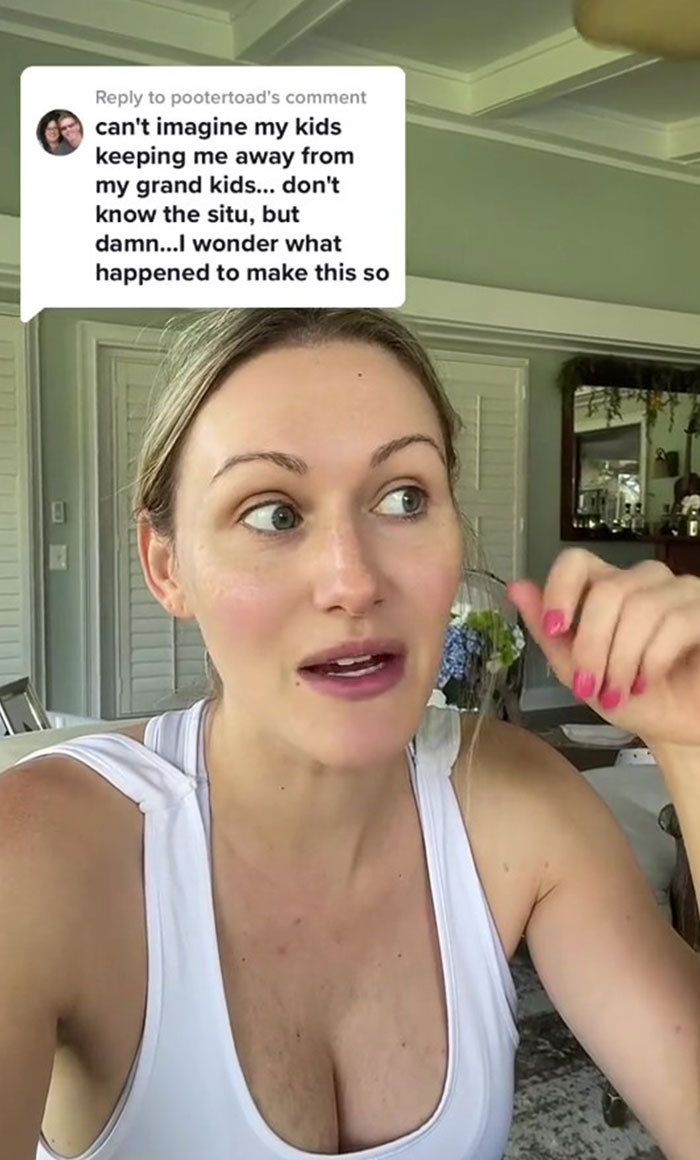 She took this opportunity to explain a very crucial difference between “my house, my rules” and setting boundaries the way it should be done. And that is that the former is authoritarian, avoiding any discussion and not really explaining anything to a mind that really needs an explanation to make sense of the world.

Boundaries, on the other hand, don’t necessarily restrict something, though they can. They are, in a way, used to teach the hows and whens and whys of actions and situations, providing room for discussion, or at the very least, an appropriate explanation. While they do retain a certain level of authority—kids need that—it’s certainly not ruling with an iron fist.

“No, you can’t do gymnastics right now because we need to leave in ten minutes, but how about later today?” and “No, you can’t jump on the couch because you can get really hurt” are the examples Lisa provides.

Lisa explains that “my house, my rules” is an authoritarian approach that eliminates any discussion, whereas boundaries at the very least provide very needed explanations 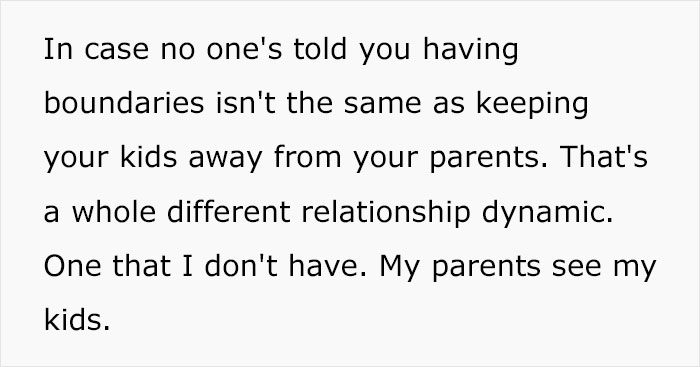 You can check Lisa’s detailed explanation in the following video

Bored Panda had a chat with Lisa about boundaries, their nuances and challenges. She explained what “my house, my rules” realistically looked like to us millennials growing up:

“‘My house, my rules’ is probably how most of us millennials were raised. It probably looked something like ‘no using the phone after 9PM’ or ‘no music at the dinner table’ or ‘no rap music in my house,’ etc. Pretty benign stuff, really. And there’s nothing inherently wrong with setting rules for the house, but ‘my house my rules’ shuts down any explanation or understanding. In my opinion, it’s lazy parenting.”

Setting boundaries effectively breaks the cycle of the “my house, my rules” idea. However, all of this progress might be for naught if the grandparents barge in, disrespecting your, as a parent’s, boundaries and going on with their “time-tested” approach. You know, because they raised one kid, they can do it again.

It is important to note that while Lisa referred to “boomers” in her video, she elaborated that their authoritarian approach isn’t boomer-specific. She said that this is how most previous generations were raised, no “ifs, ands or buts.”

Another mom and therapist, Audia Reggie, also pointed out that grandparent-grandkid relations are actually a privilege, and not a right 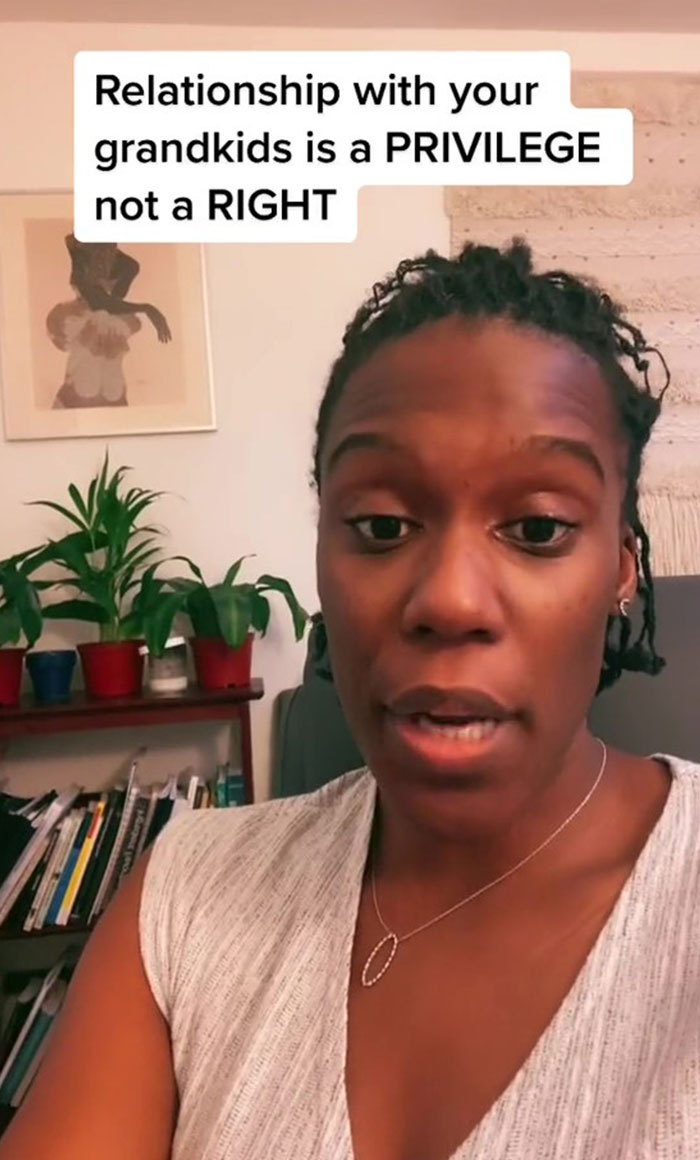 Another mom, therapist Audia Reggie, pointed out a key aspect of grandparent boundaries in her video that she dedicated to entitled grandparents. She said that, for a grandparent, to have a relationship with a grandchild is a privilege and not a right.

From a legal standpoint, in the United States, grandparents have no rights when it comes to grandchildren. So, since, more often than not, the proximity that a grandparent has with a grandchild reflects the kind of relationship they have with their own now-adult children, they ought to start fostering a good relationship with the latter first because they ultimately get to decide how close they want the grandparents to be.

At least in the US, grandparents have no rights to grandkids, which suggests that the relationship they have with their adult kids is likely going to be the same with the grandkids 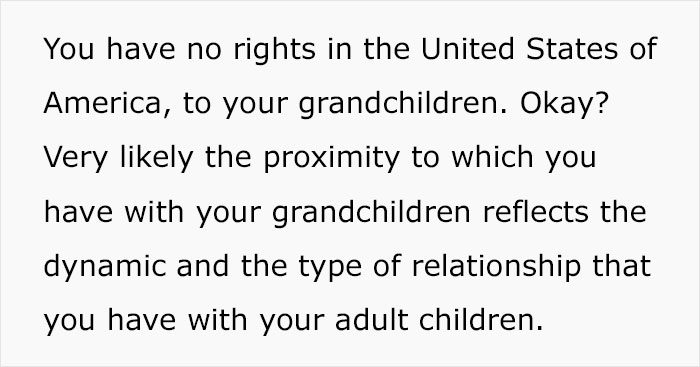 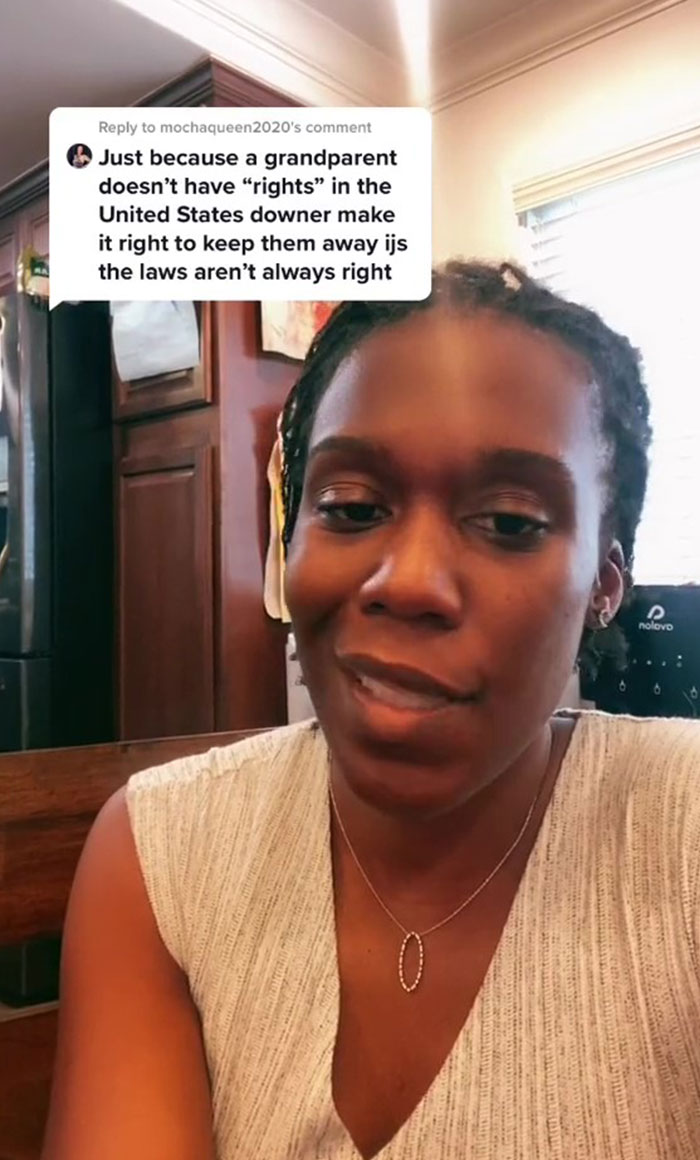 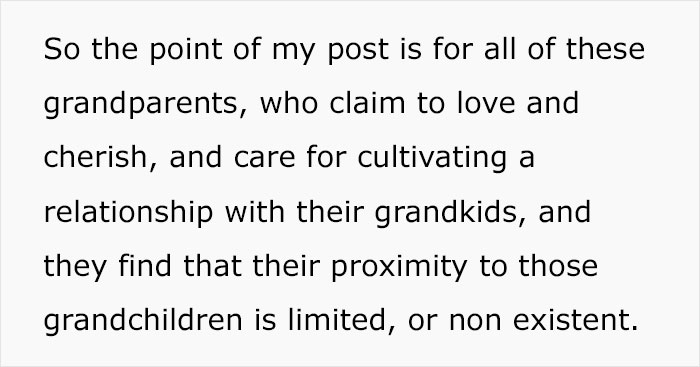 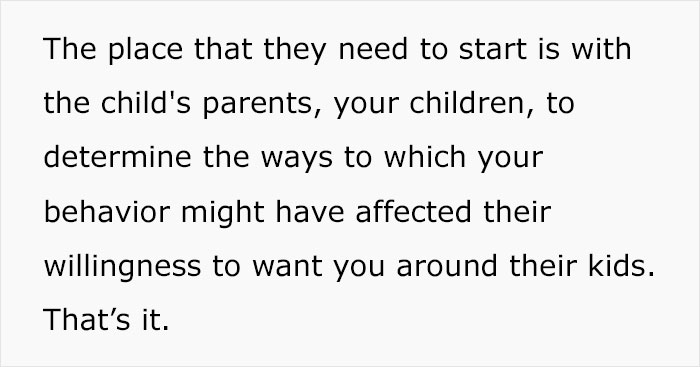 And before all the grandparents start to cry wolf, hypnotic coach Micah Stephens debunks the idea that kids “need” their grandparents. They don’t need grandparents—“they need love and respect.”

Now, if they do end up getting that from grandparents, that is amazing. But if they instead get the same “my house, my rules” sort of approach that entails control and abuse, then they don’t need grandparents. Not with that attitude, at least. 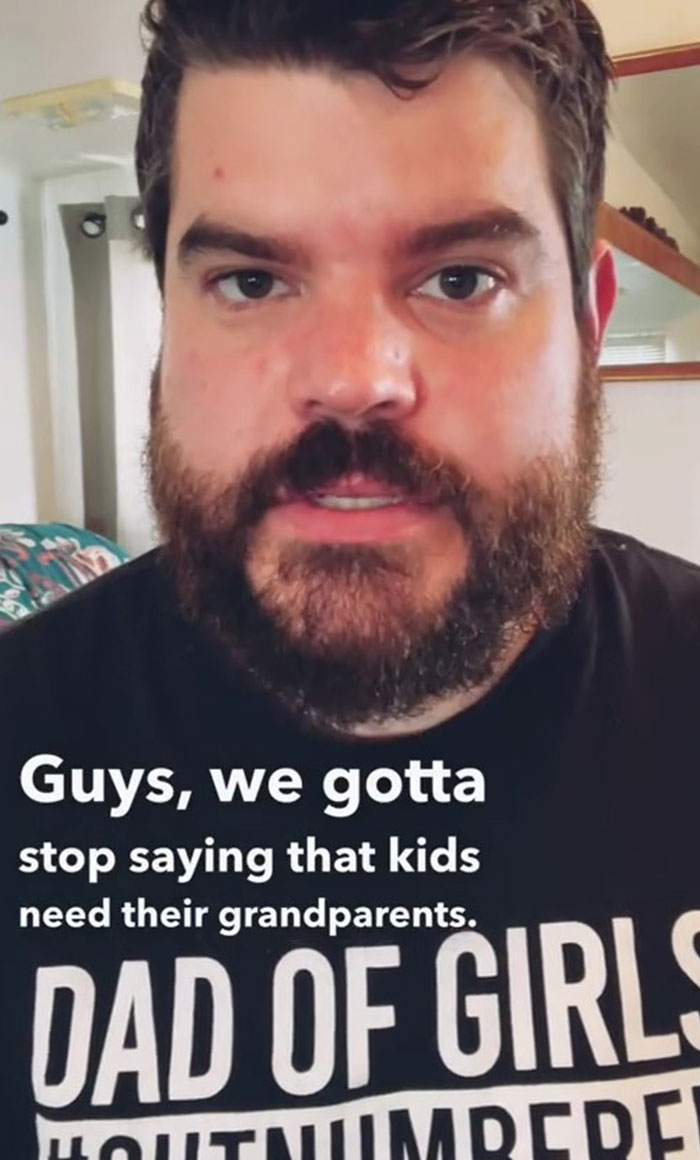 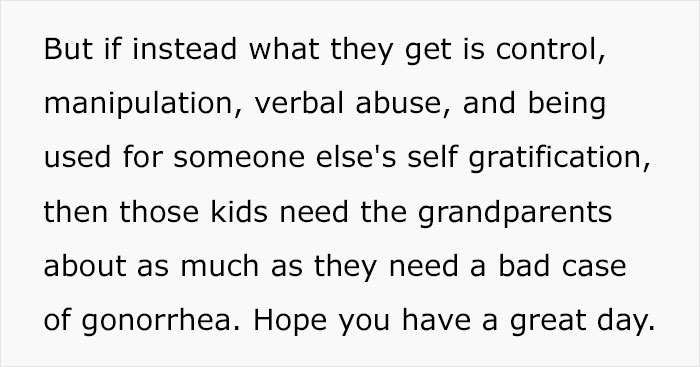 But let’s humor the possibility that a grandparent has to be put in time-out. The kid has to know why their grandparents aren’t visiting as often, if at all, right? Lisa elaborated on this:

“To answer this would require a lot of context—on the relationship, on the boundary that was broken and the severity of the problem. If it were a safety issue, I would explain it to my kids in that way: ‘my job as your mom is to keep you safe, and grandpa doesn’t make safe decisions right now so we need to see him less’—something like that. Obviously it would need to be age appropriate and tailored to each family. I’m thankful I haven’t been put in that position because it is a hard place to be.”

Boundaries can come in many shapes and sizes. One of the most popular ones that folks love to violate is gifts. Instead of doing what the parents asked, “just one,” they bring in an amount that you’d probably need a credit loan for. Diary Of Honest Mom showed it best. 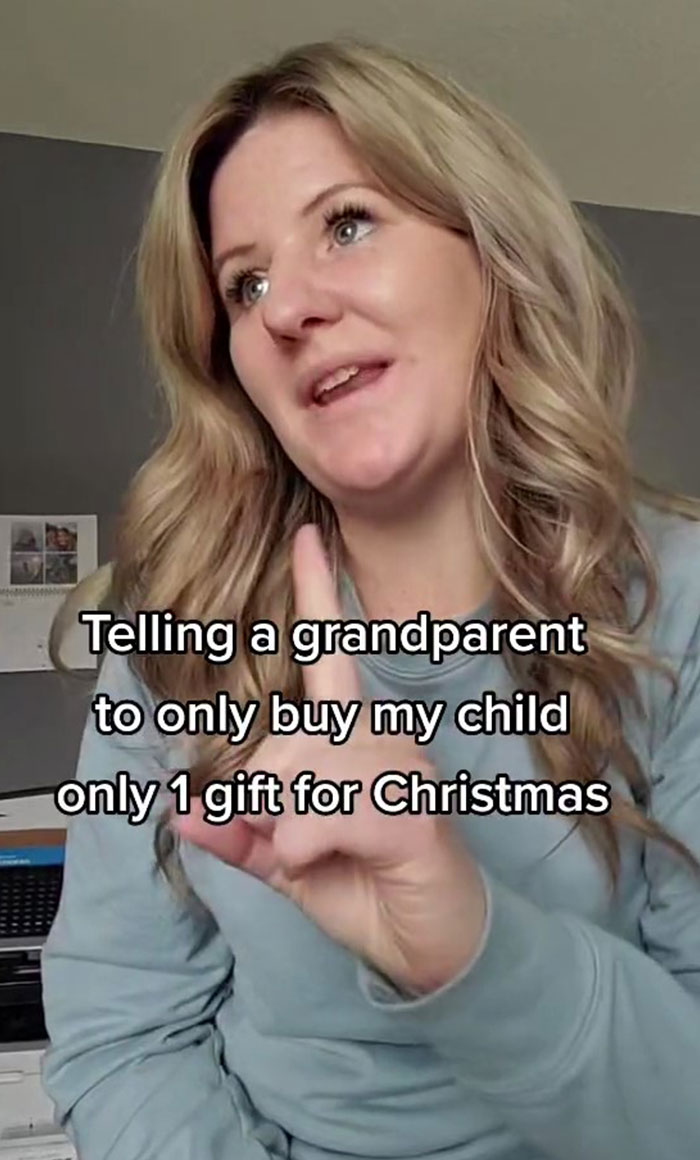 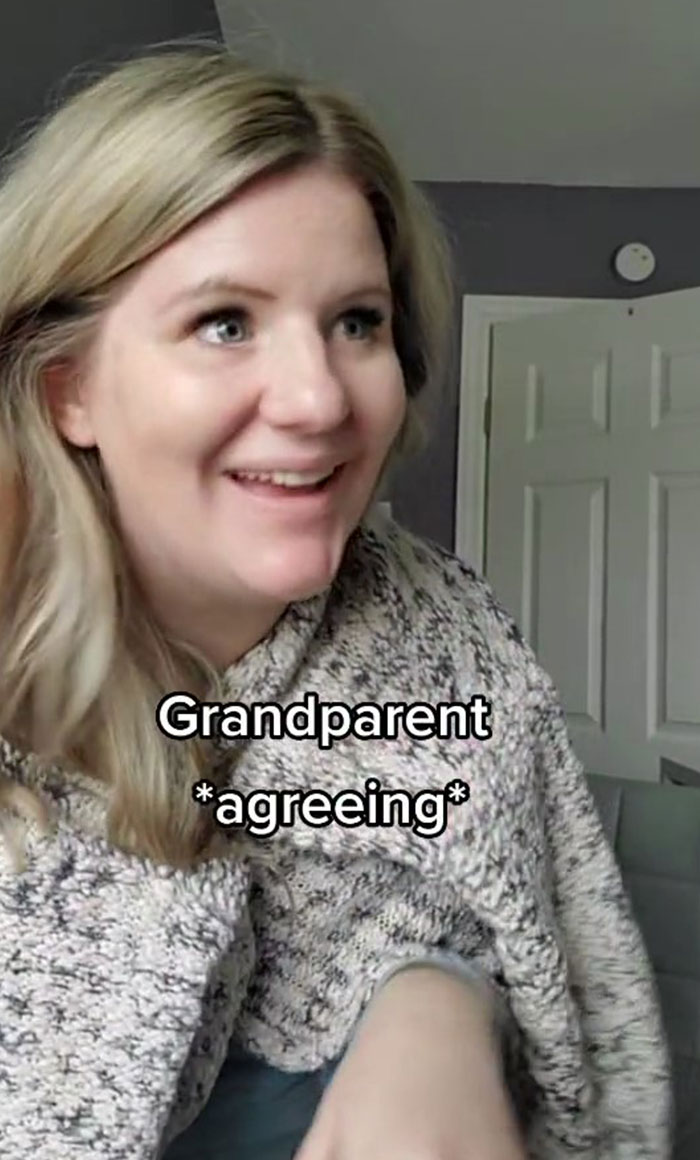 But it can also manifest in the form of honoring the parenting style, enforcing screen time rules, respecting the kid’s diet (and restrictions), and even being consistent with discipline. In fact, even the parents should coordinate together on all of these as it otherwise would open up doors for the kid you as a parent wouldn’t want open.

Needless to say, setting boundaries is challenging no matter how to go about it, as explains Lisa: “My biggest struggle is probably just feeling like the bad guy. I have always been a people pleaser and I still find myself wanting to avoid conflict unless necessary. Over the years, I’ve mostly gotten over that for the sake of my kids and my family, but it’s still not something I enjoy.”

But that isn’t the only boundary as there’s also honoring parenting styles, enforcing screen time, respecting kids’ diets and the like 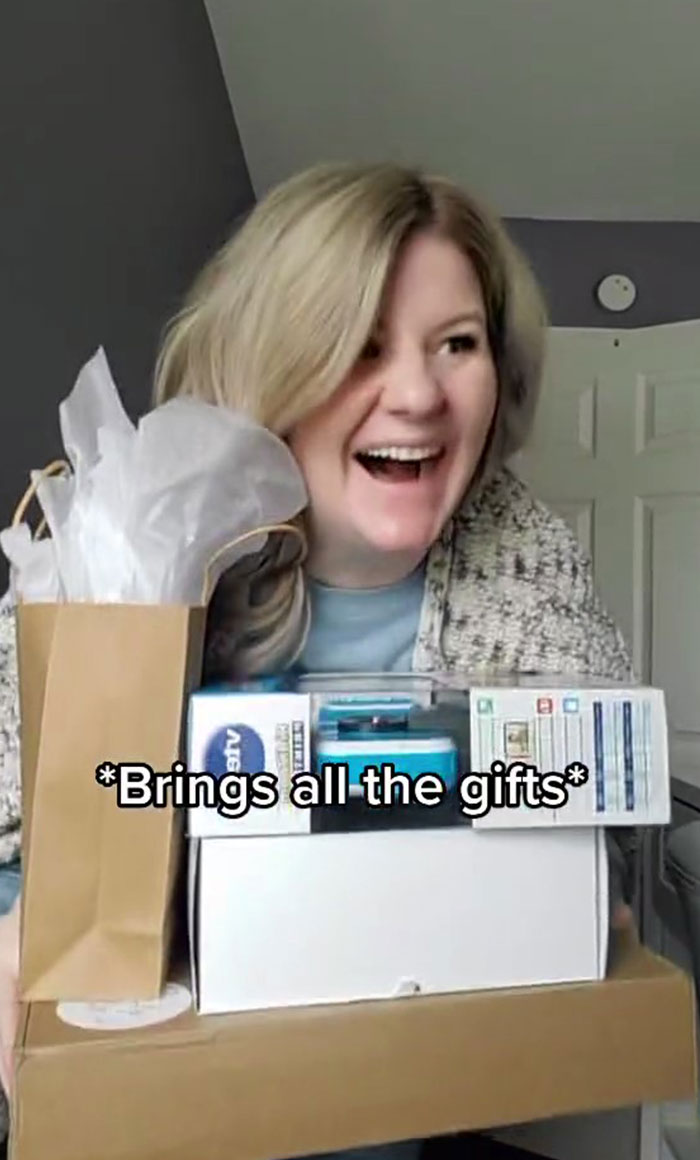 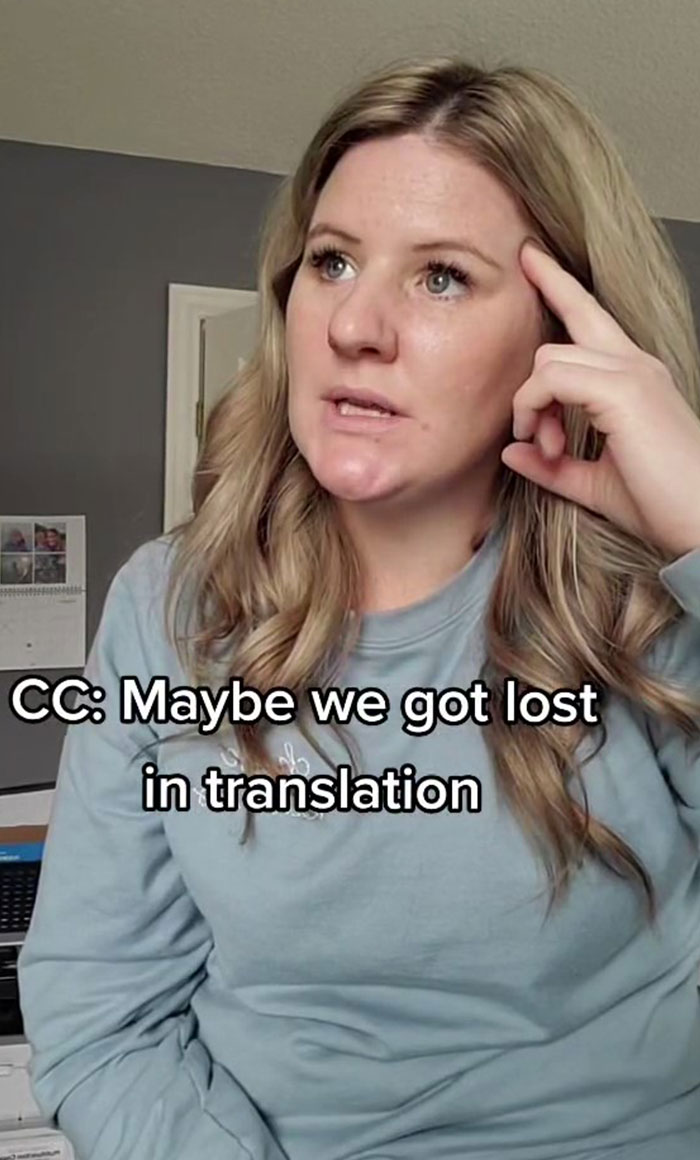 Now, this whole “grandparent boundaries” trend isn’t to say that there is a rising problem of grandparental disobedience, because “following parental guidelines is for chumps” and stuff. But just like there are still folks who throw out “so, when will we hear the pitter-patter of little feet?” in casual conversation, folks assuming their old parenting habits are still valid have a non-zero chance. And this trend aims to lessen it.

What is hopeful to see is that this isn’t an apocalyptic scenario where all grandparents are going to absolutely disregard their kids’ parenting. Gwenith Rachelle, who’s a mom of 5 and a grandma of 1, also went viral with a video of hers where she explains the ways in which she chooses to respect her son’s parenting—asking for instructions and permissions on taking care of their kids and avoiding the mentality of “I’ve had kids so I know what I’m doing.”

You can check out everything that Lisa does on her TikTok and Instagram. But before you go, the discussion continues as you are invited to share your thoughts and feelings on grandparent boundaries in the comment section below. We leave you with Lisa’s concluding remark on what she thinks everyone ought to know about boundaries:

“Boundaries are something I think every relationship needs. They’re there to help navigate relationships so everyone feels respected. A grandparent respecting the boundaries put in place by the parents ensures a healthier dynamic overall and more time spent with their grandkids.”

The post Parents Call Out “Boomer Grandparents” Who Overstep Boundaries, Explaining The Toxicity Of The Whole Dynamic first appeared on Bored Panda.