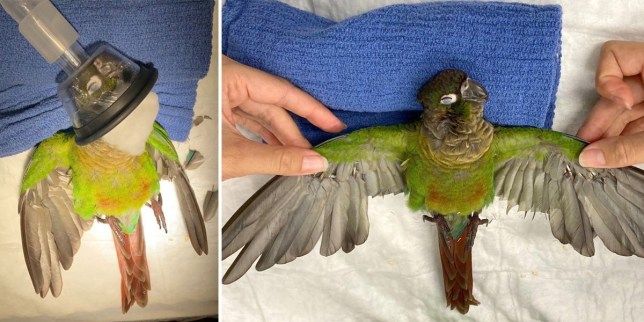 A green-cheeked parakeet has been given a prosthetic set of wing feathers after hers were cut off by her owner. The parakeet, named Wei Wei, was in agony and unable to fly without falling into the ground after her wing feathers were clipped off. The vets at The Unusual Pet Vets in Brisbane, Australia made the prosthetic wings to help Wei Wei fly again, as Metro UK detailed:

Dr Catherine Apuli made Wei Wei’s prosthetics out of feathers donated to the clinic which had been cleaned, sterilised and dried. Dr Apuli said: ‘Primary flight feathers – the big feathers at the ends of the wings – which have been traumatized may result in pain, bleeding, unwanted aggressive behaviour and self-induced feather plucking. ‘The imping procedure was performed to prevent further physical injury and to regain flight for optimal mental and physical health.’ Wing clipping is carried out to restrict flight and protect indoor birds from injuring themselves on ceiling fans or by flying into large windows. But the practice is controversial, with experts saying there is no evidence to suggest clipped birds are any safer than those with full wings when kept inside as pets.